Panthers star Jarome Luai is so serious about winning Sunday’s grand final, he had his newborn daughter with partner Bailey Paris Toleafoa induced on Monday to ensure the birth didn’t clash with the big game.

The 25-year-old welcomed daughter Halo, his third child with Toleafoa, on Monday – posting an adorable snap of the newborn in a crib wrapped in a hospital blanket.

The pair are already parents to Akira, 10 months, and Izzy, four.

He followed up the snap with some shots of Izzy meeting his new baby sister, with the toddler smiling for a photo with his mother before kissing Halo sweetly on the cheek. 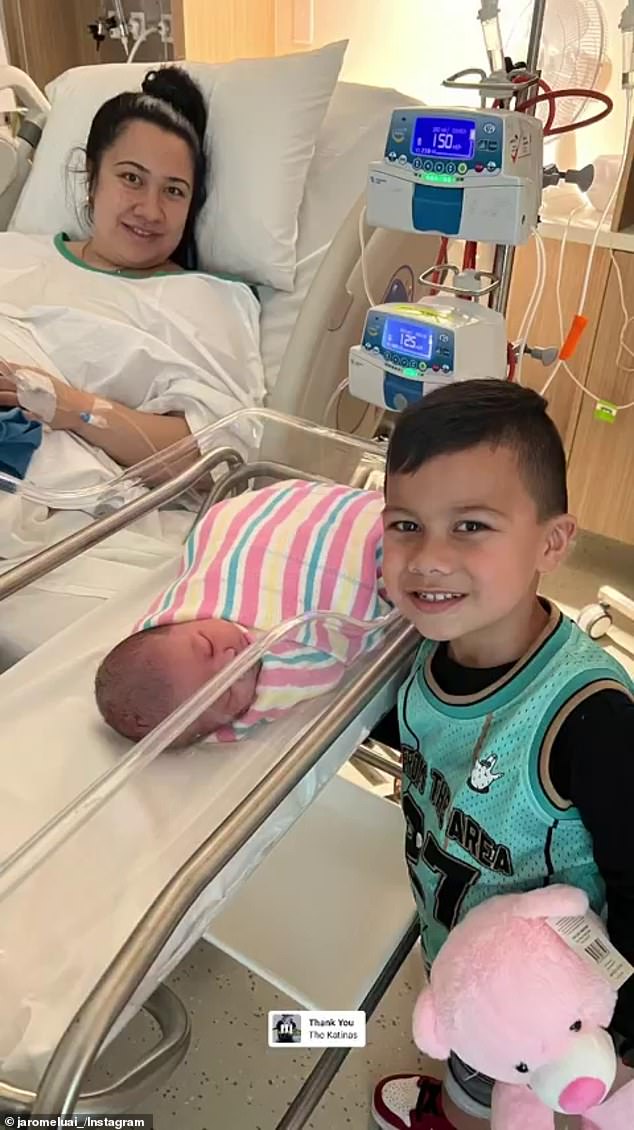 Luai’s partner Bailey Paris Toleafoa with the couple’s son Izzy, with daughter Halo lying in the crib wrapped up in a hospital blanket

Luai has vowed to bring a premiership ring home for Toleafoa after she was induced into labour to avoid a possible grand final dilemma.

He returned for the club’s fan and media day on Tuesday, before rushing back to the hospital to help take Halo home for the first time.

With their baby initially due on Tuesday, the couple had long planned to accelerate the process, if needed, to ensure there was no clash with Sunday’s decider.

In doing so, they avoided the situation that Luai’s opponent Mitchell Moses was presented with last week, when he missed attending the birth of his first child to play in Parramatta’s preliminary final win in Townsville. 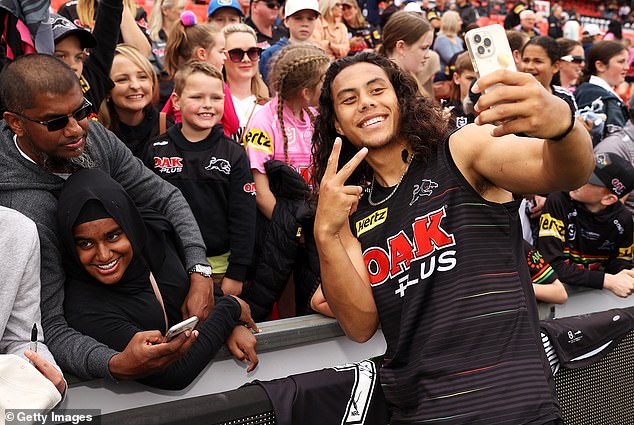 Now, the pair will mark up against each other in the title decider at Accor Stadium after rollercoaster weeks.

‘We planned it previously that if we were to make the grand final that Bailey would get induced on Monday,’ Luai told AAP on Tuesday.

‘She was due today. It just feels like the stars have aligned for us. They’re special moments that I’ll never forget and cherish until I die.

‘Just grateful and blessed that baby’s healthy and my partner’s healthy and now I can focus on the job at hand,’  said a beaming Luai. 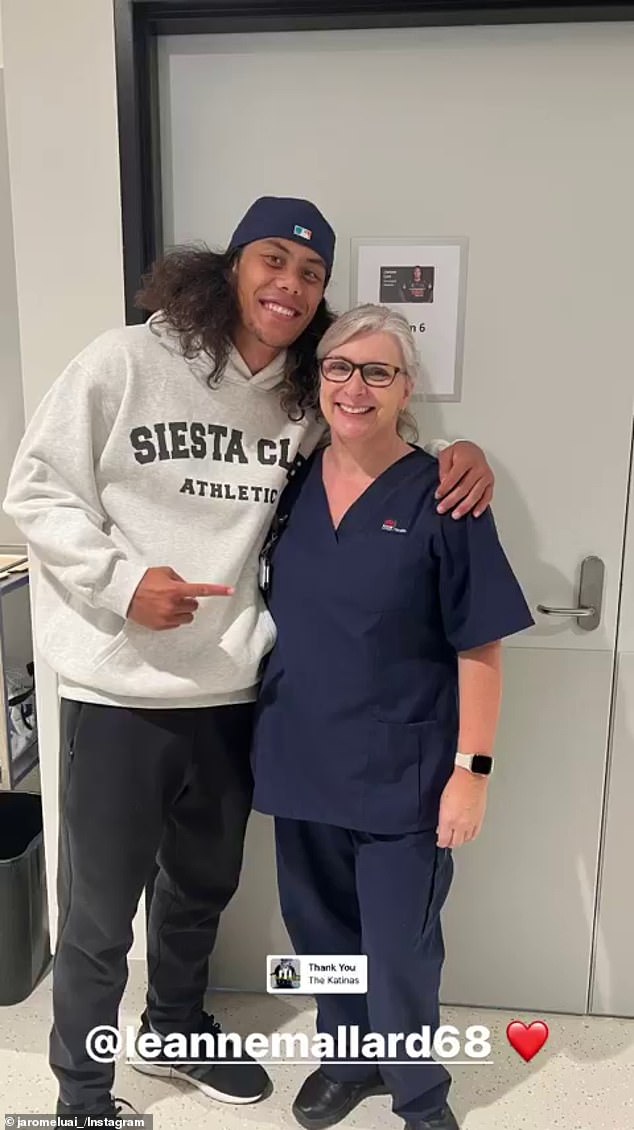 Luai thanks a woman on his Instagram, who appears to be the couple’s nurse or midwife

The Penrith star also posted a photo of a woman in scrubs who appears to be the couple’s nurse or midwife, with the two smiling and Luai thanking her with a love-heart emoji.

Now with three children aged under four, he was also adamant sleep will not be an issue this week as he prepares for the biggest match of the season.

He jokingly claimed he considered checking himself into a hotel room to ensure he was well rested to play a crucial role in Penrith’s shot at back-to-back titles. 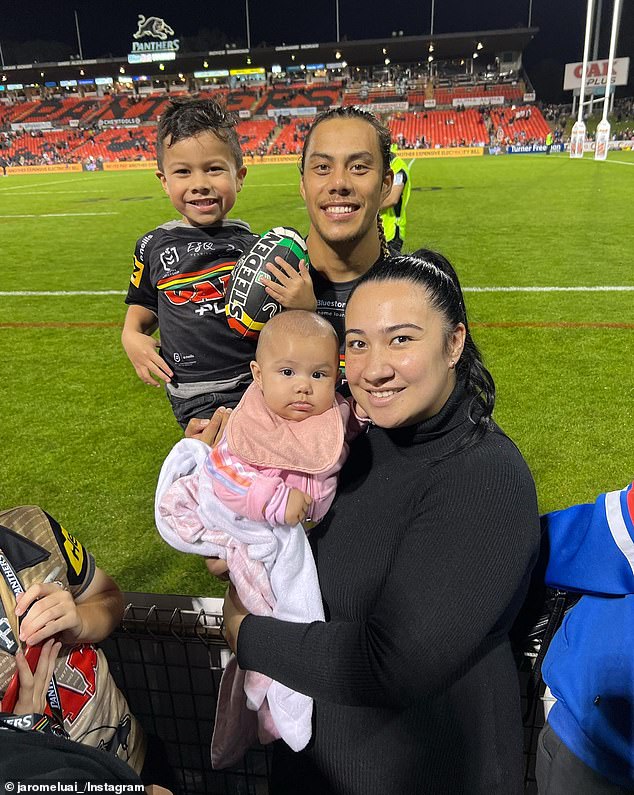 But the beautiful bond he shares with his partner ensures that won’t be necessary.

‘I’m sweet. I’ll get my sleep and my missus will make sure I’m getting sleep anyway,’ Luai said of his grand final week preparations.

‘She’s that type of person. Very selfless. She knows how much this means to me and the boys.

‘She’s going to play her part, I’m sure. And I’m going to do my best to bring a ring home for her,’ promised the Panthers star. 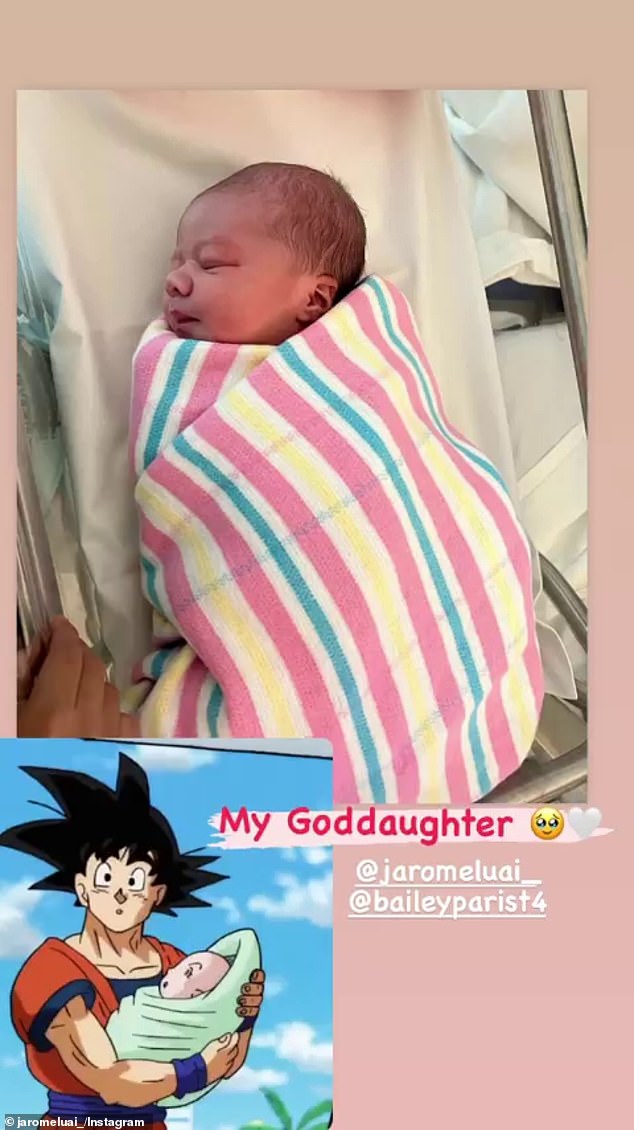 Brian To’o posted a tribute to Luai’s daughter Halo, captioning a photo of the newborn ‘My goddaughter’

Close friend and Panthers teammate Brian To’o posted a sweet Instagram tribute to Halo on Monday, captioning a photo of the newborn ‘My goddaughter’, complete with a love heart and happy crying face emoji.

A beaming Luai sat up against the goalposts and played with his Akira before posing for photos.

Judging by the smiles on both of their faces, it was a precious moment of peace and joy ahead of what is the most hectic week on the rugby league calendar. 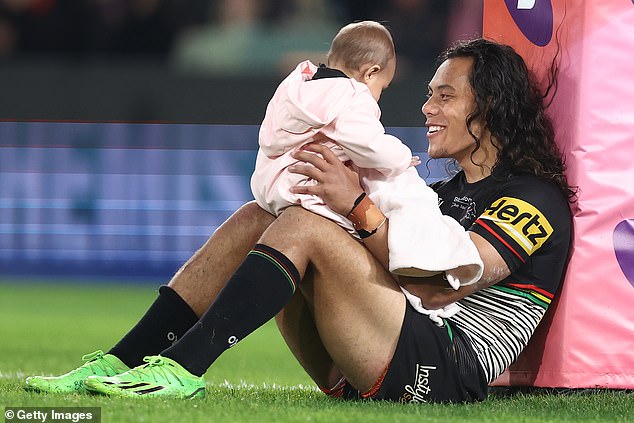 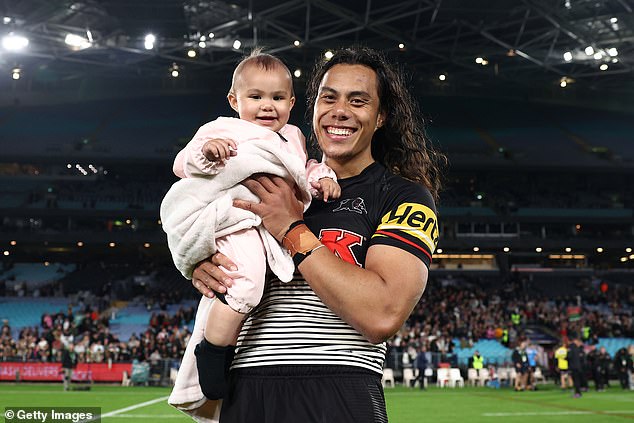 In more good news, the star five-eighth said the healthy arrival of Halo also meant he was still able to go ahead with his World Cup plans, and he was named in Samoa’s 24-man squad on Tuesday.

He will feature in a surprisingly star-studded team for the Tier 2 nation alongside five of his Penrith teammates.