Wolford Chapel and Estate were bought by war hero Lord Simcoe, 1st Lieutenant Governor of Upper Canada, after he recovered from injuries at the siege of Yorktown in 1781

A chapel in Devon belongs to Canada after its deed and collection of antiques were donated by a publisher to the people of Ontario in honour of a British War Hero who founded Toronto and aimed to abolish slavery there.

Sir Geoffrey Harmsworth donated furniture from Wolford Chapel, built in 1800 is sited inside the Wolford Lodge near Honiton, Devon, to Ontario in 1996 and means the church is in Canadian territory.

He honoured Sir John Graves Simcoe, son of a Royal Navy captain, who commanded the 60-gun HMS Pembroke during the Siege of Louisbourg, with James Cook as his sailing master, and began a life-long military career.

Simcoe secured a commission as an ensign in the 35th Regiment of Foot before being sent to Boston under siege by Washington’s Continental Army in 1775, and given command of the Queens Rangers two years later.

He went on to become captain in the 40th Regiment of Foot and commanded them at the Battle of Brandywine on September 11, 1777 where he was wounded and moved back to England. 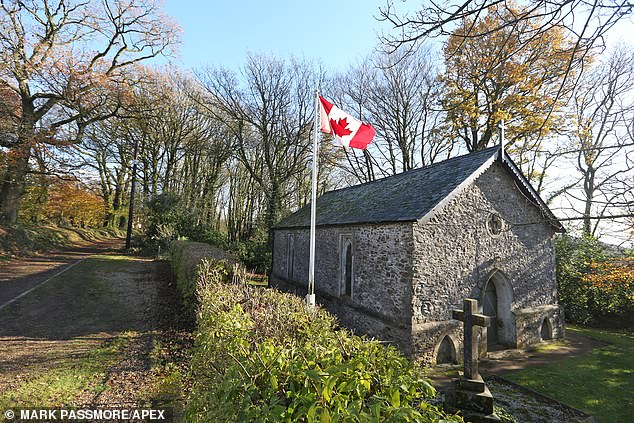 In 1966, British publisher Sir Geoffrey Harmsworth gifted the chapel to the Ontario Heritage Trust in honour of Simcoe who became captain in the 40th Regiment of Foot and commanded the army at the Battle of Brandywine in 1777

While recovering from injuries at the siege of Yorktown in 1781 in England, he met and married heiress Elizabeth Gwillim.

The couple purchased the 5,000 acre Wolford Estate and made the Wolford Lodge their main residence before Simcoe entered politics in 1790.

He was elected Member of Parliament for St Mawes in Cornwall, as a supporter of the government, and proposed raising a militia force like the Queen’s Rangers. 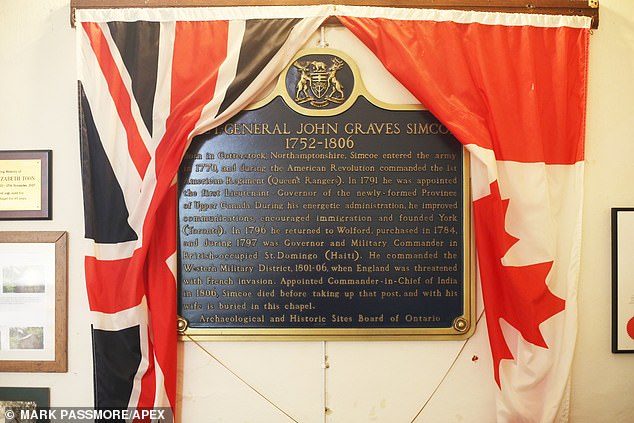 A tribute is paid to Simcoe, who was elected Member of Parliament for St Mawes in Cornwall, in 1790 and went on to found the city of York (now Toronto) and one of his first acts as the first Governor of Upper Canada (Ontario) was to abolish slavery in the province

Simcoe proposed to lead an invasion of Spain but instead he was to be made lieutenant governor of the new loyalist province of Upper Canada and resigned from his MP post after five years.

During his time as MP, he founded the city of York (now Toronto), but one of his first acts as the first Governor of Upper Canada (Ontario) was to abolish slavery in the province.

This helped slaves in Canada and also allowed around 40,000 slaves escaping from America to gain freedom there.

Upon returning to Englnad, Simcoe had visions of restoring the nearby Hemyock Castle to its former glory but his duties as Lieutenant-General in command of coastal defence in Devon defending against Napoleonic invasion prevented him.

In 1806 shortly before he was due to assume command of British forces in India he died of a sudden illness contracted during a diplomatic mission to Portugal.

Lord Simcoe, 1st Lieutenant Governor of Upper Canada along with the rest of his family, are buried at Wolford Chapel. 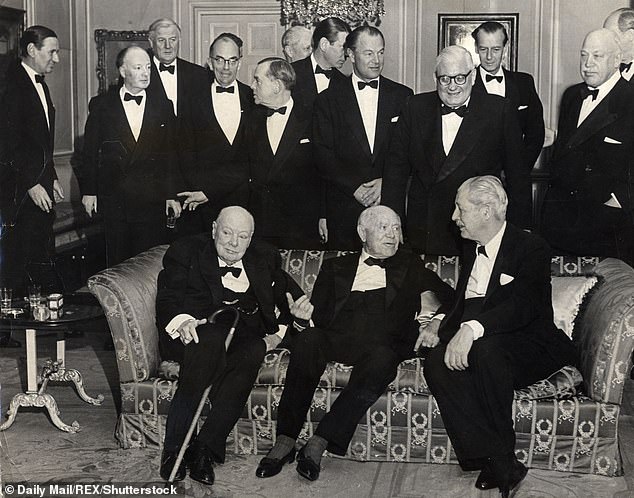 Mr Harmsworth (pictured fourth from the left among Lord Beaverbrook, Sir Winston Churchill, Mr Michael Berry Editor In Chief Of The Daily Telegraph, Lord Iliffe Vice Chairman Of The Birmingham Post And Mail, Mr Alick Jeans Managing Director Of The Liverpool Daily Post and others during a dinner party in 1986) granted the furnishing as a gift to the Trust 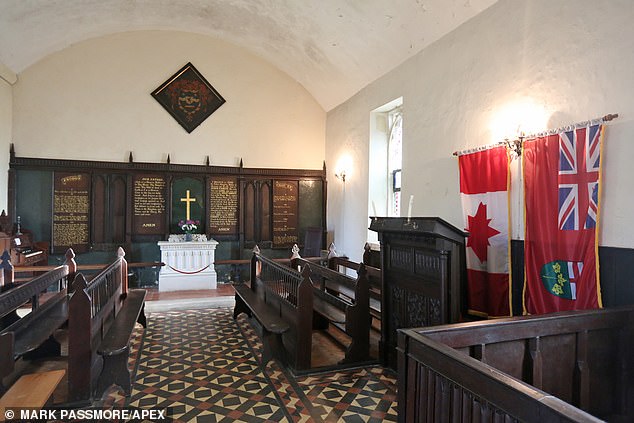 The chapel remains in Canadian territory and a native flag is seen alongside a UK flag inside the church. It was in the Simcoe family until 1923 when Harmsworth bought it and gave the deed to John Robarts then serving as Premier of the Province of Ontario in 1966, as well as furnishings to the Trust

Wolford Chapel was erected in 1800, near their family home of Wolford Lodge on the site of the former Wulphere Church, that refers to a 7th century king of Mercia.

The chapel and estate remained in the Simcoe family until 1923 when they were purchased by a wealthy publisher named Sir Geoffrey Harmsworth.

In 1966 Harmsworth granted the chapel and its historic furnishings as a gift to the Ontario Heritage Trust and gave the deed to the chapel to John Robarts then serving as Premier of the Province of Ontario. 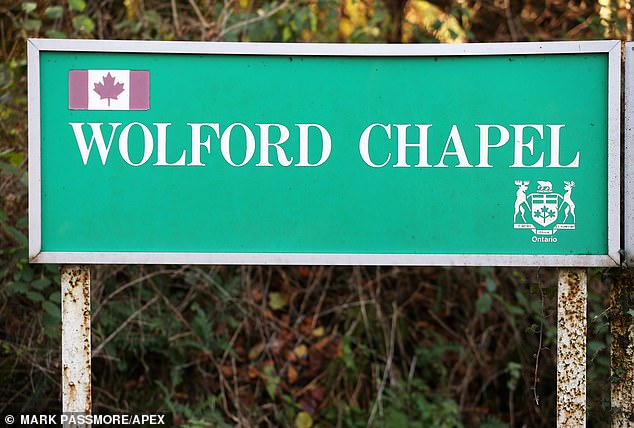 At the same time a permanent right of way to the property was established across the Simcoe Estate.

The chapel is currently maintained by a local charity but it is Canadian territory and a Canadian flag flies outside the chapel.

A brochure from the period stated that The John Graves Simcoe Memorial Foundation had been established to ensure ‘the chapel will never fall into neglect and will always be open to visitors from Canada and elsewhere’.

The Chapel is open to the public during daylight hours.

A team of volunteers assist with the day to day running of the Chapel.