They may be quick and easy to use.

But self-service check-outs — now a staple of modern supermarkets and convivence stores — are littered in bacteria found in human faeces.

That is according to public health chiefs, who swabbed some of the devices to show how dirty they can be.

Bugs found lurking on the machines, used by thousands of people every day, can make people ill, sometimes severely, if they enter the body.

This can happen through not washing our hands before we eat, or touching our nose, mouth, and eyes with dirty fingers.

Experts have now urged shoppers to wash their hands thoroughly after using the checkouts and host of other everyday items in the run up to Christmas.

Lab analysis showed self-service checkouts had ‘one of the highest bacterial loads’, with five types of bacteria known to cause disease in people.

One of these was a bug called Enterococcus, a bacteria commonly found in faeces. 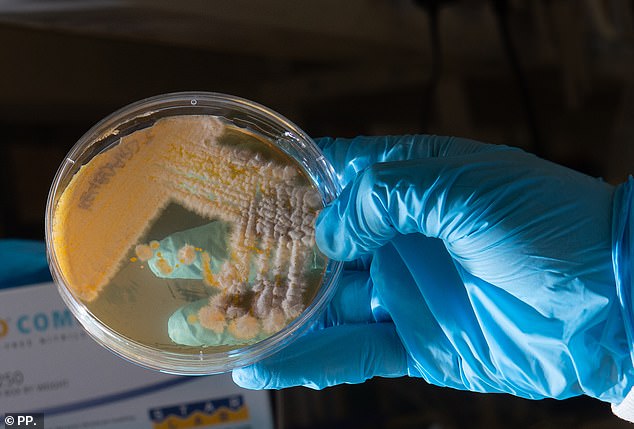 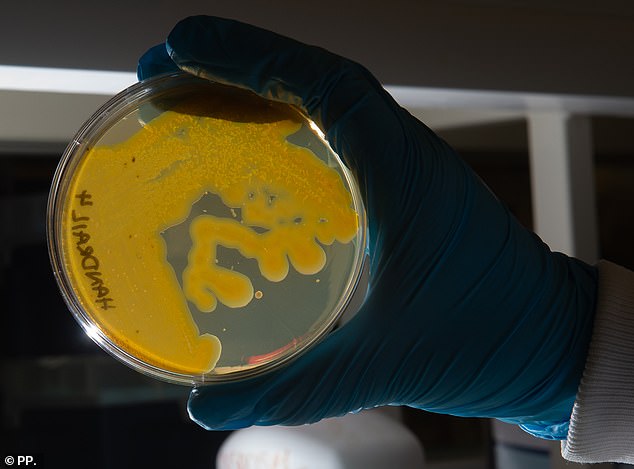 Another from an escalator hand rail (pictured) came back with a bacteria commonly found in the vagina and mouth called Candida albicans, which can cause yeast infections 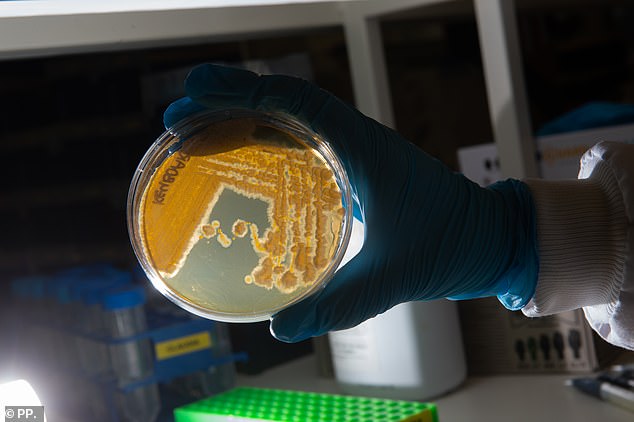 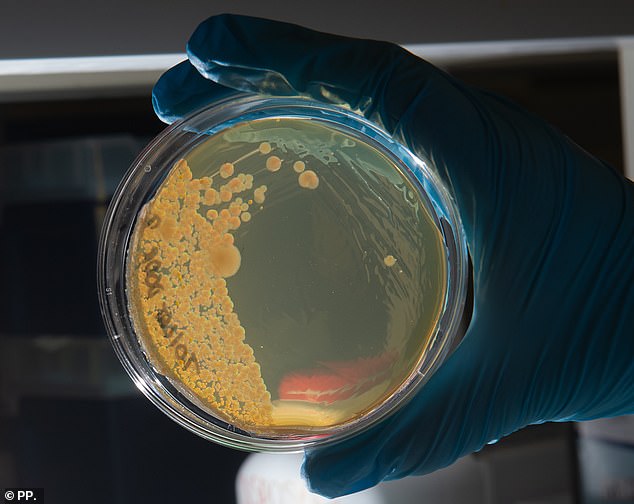 Scientists said E.Coli, which can cause stomach cramps and diarrhoea was found on almost every item analysed (pictured the results from a swab from a toilet door)

HOW AND WHEN TO WASH YOUR HANDS

Washing your hands is one of the easiest ways to protect yourself and others from illnesses such as food poisoning and flu.

People should wash their hands:

You should wash your hands for the amount of time it takes to sing ‘Happy Birthday’ twice (around 20 seconds):

If you do not have immediate access to soap and water then use alcohol-based hand sanitiser if available.

Another bacteria found on almost every item analysed was E. coli, with some strains causing diarrhoea, stomach cramps, fever and bloody stool in people.

It’s not usually fatal but patients can need hospital care.

A bacteria commonly found in the vagina and mouth called Candida albicans, which can cause yeast infections, was found on an escalator handrail.

Bacteria that can cause painful UTI — called Klebsiella — were found on living on computer keyboards.

‘We live in a bacterial world – bacteria and microbes are everywhere, and we come into contact with them all day, every day,’ he said.

‘It’s vital to try to minimise their effects in terms of infection prevention and control, so when we touch our mouths or go to the toilet and don’t wash our hands, we’ve likely got bacteria from these places on our hands which can then transfer to other things – and subsequently to other people.’

He added that while for most people this might only result in a mild illness over Christmas, for vulnerable people like children, the elderly, or those undergoing cancer treatment, it could be more serious.

‘If those individuals are more susceptible to infection than you are, there may be a problem,’ he said.

Apart from self-service checkouts, Dr Roberts said office workers in particular should beware the bugs lurking in their keyboards.

‘We found multiple examples of E. coli and a bacteria called Klebsiella on computer keyboards,’ he said.

‘While both exist naturally in faeces and intestines, given the right environment, they are able to cause quite severe diseases in humans.

‘So it’s vital that we wash our hands before and after eating when working at the computer.’

The experiment was initiated by the Champs Public Health Collaborative a public health partnership between nine Directors of Public Health across Cheshire and Merseyside.

It is part of hygiene campaign called Simple Things, which calls on people to adopt four basic behaviours to help minimize the spread of bugs this winter. 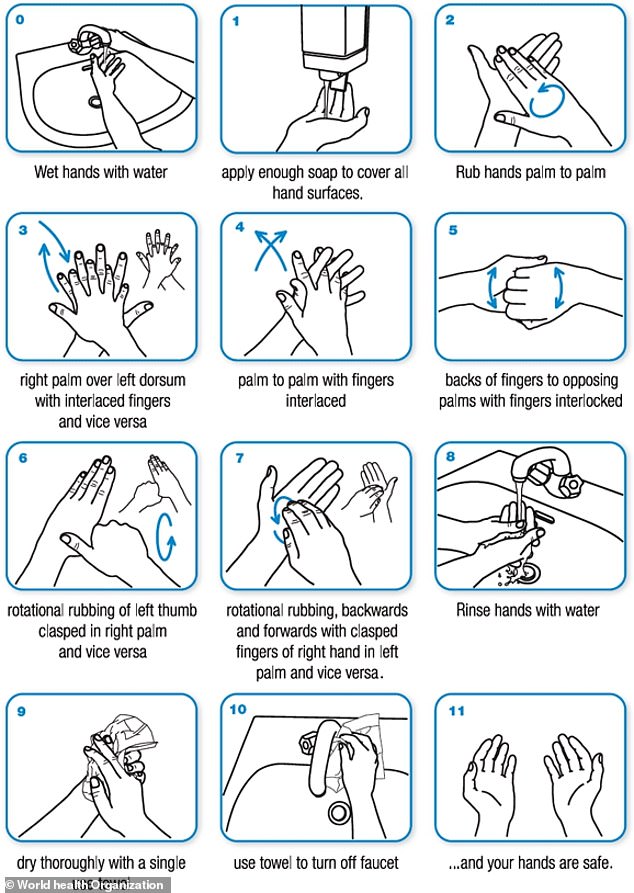 The CDC’s hand washing guide follows the WHO’s guidelines – which include 11 detailed steps, including the exact technique you should use to make sure every part of your hands are clean (WHO’s guidelines pictured) 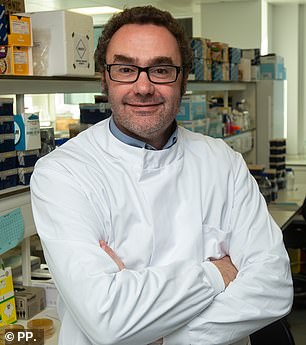 Dr Adam Roberts, a microbiologist which examined the results of the swabs said findings demonstrated the importance of good hand hygiene

These are to wash their hands regularly, sanitise surfaces, keeping distance when feeling unwell and covering their mouth when they sneeze or cough.

Matt Ashton, director of public health for Liverpool, is now urging those with vulnerable loved ones in particular to take extra care and ensure their hands are clean before coming into contact with them.

‘Our results showed that there are multiple bacteria living on objects that we touch every single day,’ he said.

‘These bacteria are completely invisible to the naked eye – surfaces may look clean but can be covered in bacteria.

‘But there are simple things we can do to prevent the spread of them and stop the transfer completing its cycle.

‘This is particularly important if you are visiting vulnerable relatives in hospitals and care homes, for example. 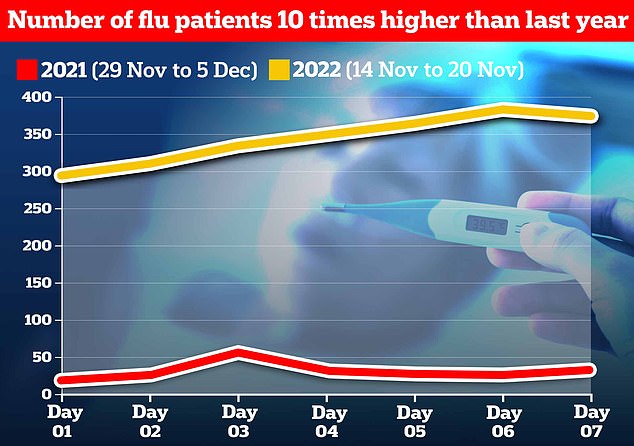 Influenza levels for the NHS’s first week of winter data are already 10 times as high as the equivalent period last year, and twice as high as last winter’s peak, data shows

Mr Ashton highlighted how illnesses like the vomiting bug norovirus and the flu always spike in winter and urged people to wash their hands after going to the bathroom as well as before and after they eat.

The campaign comes amid concerns the NHS is facing a tripledemic of flu, Covid and seasonal bugs this winter.

Figures from the NHS’s first week of winter data show influenza levels in hospitals are already twice as high as last winter’s peak.

The experiment comes just weeks after a major report revealed bacterial infections kill nearly 8million people each year amid warning superbugs, which antibiotics struggle to beat, are on the rise.