How Stonewall influenced the BBC

The BBC showed staff a controversial ‘genderbread person’ graphic in equality training using material from under-fire LGBT charity Stonewall – and is now refusing to answer questions from one of its own presenters about its links with the organisation.

The image, which was presented to employees as part of an internal BBC course set up in conjunction with the lobby group, depicts sex as a spectrum and defines gender identity as ‘how you think about yourself’.

It was shown with no alternative explanations despite these ideas being contested, according to an investigation by Nolan Investigates, a podcast run by 5 Live presenter Stephen Nolan.

The programme examined how public-funded bodies including the BBC, Ofcom and the Scottish and Welsh governments have been influenced by Stonewall due to their involvement in the group’s diversity schemes.

The image, which was presented to employees as part of an internal BBC course set up in conjunction with the lobby group, depicts sex as a spectrum and defines gender identity as ‘how you think about yourself’

The Diversity Champions programme, which was set up in 2001, sees the charity bill employees for advice on how to promote gender inclusion. The Workplace Equality Index is a public ranking of organisations that does not require a fee to enter.

Diversity Champions has been criticised for ‘extremist’ advice which included ditching the word ‘mother’ because it is ‘gendered language’.

A raft of organisations including Ofcom, Channel 4, the Cabinet Office and the Equality and Human Rights Commission have already left the initiative following criticism of its hard-line policies and widespread outrage after its boss said believing a person’s sex cannot be changed is as bad as anti-Semitism.

Recent reports say the BBC could also soon quit the scheme. It is not known how much the BBC have paid to take part.

A Freedom of Information Request has revealed the Scottish Government has paid Stonewall £415,000 in grants between April 2017 and last month, in addition to thousands of pounds worth of membership fees.

Nolan Investigates uncovered sensational new information about how various public bodies including the BBC, Ofcom and the Scottish and Welsh Governments have adapted their ways of working to bring them closer to Stonewall’s contested interpretation of LGBT issues. Among the revelations – 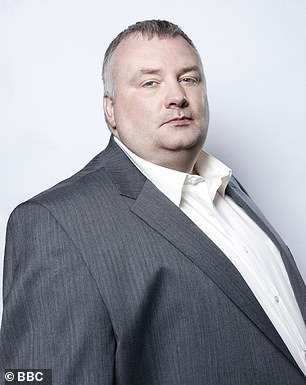 Nolan Investigates dedicated two episodes to raising questions about the close relationship between Stonewall and the BBC’s Diversity and Inclusion department.

It revealed how the lobby group played a key role in the department’s internal ‘LGBT Culture and Progression report’ by ‘identifying strengths and weaknesses’ in the BBC’s approach.

One of the ‘weaknesses’ was the absence of an Allies programme, which are set up with training from Stonewall when the organisations are Diversity Champions.

In January 2020, the BBC told staff they would ‘be working closely with Stonewall over the coming months in preparation for next year’s [Stonewall] index’.

The BBC’s eventual Allies training programme used the ‘genderbread person’ graphic – which is used by groups including Stonewall to explain sex and gender issues.

Nolan Investigates cited information from the BBC staff website to reveal a series of other policy changes the BBC had enacted in the hope of gaining a better position on Stonewall’s Workplace Equality Index, a ranking of organisations based on their inclusivity.

Changes include adopting the LGBTQ+ acronym and encouraging employees to list their gender pronouns.

Critics have also pointed out that the BBC’s definition of ‘homosexual’ mirrors language used by Stonewall that describes someone ‘attracted to people of their own gender’ – rather than sex.

The podcast described the BBC as the least transparent of the public bodies which it approached for information, and said it refused to comment on claims about its definition of ‘homosexual’.

It also declined to release internal documents relating to Stonewall under the Freedom of Information Act and refused to put an executive forward for interview.

A corporation spokesman said:  ‘The BBC acts independently in all our aspects of our operations, from HR policy to editorial guidelines and content.

‘We aim to be industry-leading on workforce inclusion and take advice from a range of external organisations, however, we make the final decision on any BBC policies or practices ourselves.

‘We do not take legal advice from Stonewall and we do not subscribe to Stonewall’s campaigning. The charity simply provides advice that we are able to consider.’

Documents released under Freedom of Information laws uncovered how Leslie Evans, the permanent secretary, told officials that climbing the Workplace Equality Index was a priority.

Stonewall requests ministers to remove ‘gendered’ words from official policies as part of its advice on becoming more LGBT friendly. 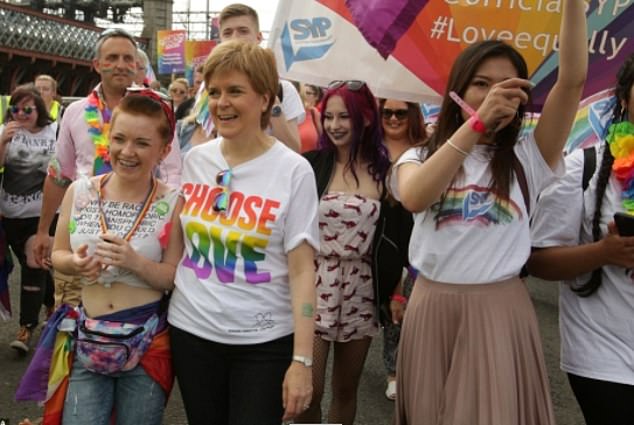 In order to achieve a better ranking, the Scottish government removed ‘mother’ from its maternity policy, replacing a passage including the term with ‘you must be the spouse or partner (including same-sex partner) or the pregnant woman’.

The Scottish government has paid Stonewall £415,000 in grants between April 2017 and last month, in addition to thousands of pounds worth of membership fees.

A Scottish government spokesman told the Telegraph: ‘We also measure progress through Stonewall’s annual workplace equality index and we consider the feedback we receive from Stonewall through this process.’ 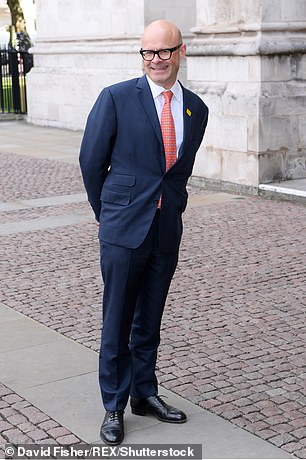 Like many public bodies, broadcast regulator Ofcom submitted evidence about its diversity practices to the Workplace Equality Index in a bid to get the best possible ranking.

Among this evidence was rulings it had made against broadcasters in response to allegedly transphobic comments – prompting some commentators to suggest its rulings were being influenced by the charity’s agenda.

This was strongly denied by Ofcom, which insisted its involvement with the index had ‘no bearing whatsoever’ on its decisions as a regulator.

For three consecutive years, Stonewall asked Ofcom to show evidence of work they had done to ‘promote LGBT equality in the wider community’.

In response, it gave examples of action they had taken in response to complaints about TV programmes including Harry Hill’s TV Burp and local radio stations.

In 2019, Ofcom told the lobby group it had ‘ruled on two instances where transphobic comments made in programmes breached the code’.

One case concerned a radio presenter who said he would be uncomfortable with his six-year-old daughter using changing rooms that were not segregated by sex.

He also described a ‘transfeminine person’ as ‘him, her, him, it’ before later apologising.

Ofcom also mentioned its 2016 judgement on a re-run of Harry Hill’s TV Burp in which the programme parodied a Channel 4 documentary called The Pregnant Man. Ofcom ruled the programme was in breach of its broadcasting code.

Ofcom said: ‘Broadcast standards decisions are made by the Broadcast Standards team within Ofcom, wholly independently from any third parties. Our participation in the Stonewall Equality Index has no bearing whatsoever on any of our broadcasting standards decisions.’

Ofcom left the paid-for Diversity Champions Scheme in August following criticism of Stonewall’s hard-line policies, but will continue to take part in the Workplace Equality Index.

A Labour MP has accused the Welsh government of being ‘dictated to’ Stonewall by adopting its interpretation of the Equality Act.

The legislation offers protections for people based on factors including age, disability, race, religion, sexual orientation, pregnancy and gender reassignment as enshrined in the Equality Act 2010.

This characteristic is not provided for in law, but something Stonewall has been fighting for.

Following the revelation by Nolan Investigates, MP for Gower Tonia Antoniazzi said: ‘It is astonishing that the Welsh government can so blatantly misrepresent the Equality Act 2010 as dictated to by Stonewall.

‘They are promoting an ideological culture and rewriting the Equality Act at the same time.

‘To misrepresent the law in this way shows a contempt not only for the law, but also to anyone who wishes to speak up for women or who has concerns around safeguarding.’

A Welsh government spokesman said: ‘As an inclusive employer, we take part in a variety of workplace benchmarking activities to ensure we learn from best practice in other organisations. Stonewall are one of a number of organisations we draw on to test our policies and practices.

‘We approach the training of colleagues in a number of ways. A large amount is delivered in-house by our own colleagues who have relevant expertise and lived experience.’