How the city now known as Kolkata beats its shabby image

Kolkata is a slow-burner.

At first glance, the Indian city, formerly known as Calcutta, is a haze of pollution, incessant honking of horns and half-built skyscrapers with bamboo scaffolding hanging off them like cobwebs.

How can anyone stay sane in a place so raucous, so grubby, so hectic? But then you venture down a side street, flanked by grimy but grand 19th-century villas in Italian style, its pavements cracked by the roots of banyan trees. The traffic noise recedes.

Unspeakably splendid: The Victoria Memorial is frequently mistaken for the Taj Mahal

For 7p or thereabouts, you can buy chai, spiced with ginger or cardamom. The vendor scoops it out of a great iron pot and, with theatrical flourish, pours it from a great height into a clay cup.

Kolkata has begun to reveal its charms. Here’s how to enjoy it …

People do everything on the street — washing under standpipes, taking their morning shave with pavement barbers, and having shirts pressed with flat-irons heated over charcoal stoves. Wander through the city and you’ll see its life.

For more formal sightseeing, Calcutta Walks has a team of well-informed young guides who lead small groups. They’ll show you the grand architectural remnants of the Raj.

Their Confluence of Cultures Walk winds through the old town, taking in a Chinese temple and market, a synagogue, Hindu temples, Christian churches and mosques, all within traffic-free lanes. From £24pp, calcuttawalks.com.

Jam-packed public ferries travel along the great Hooghly River — from the Botanical Gardens south of the city to the Kali Temple at Dakshineswar in the north. Hire a brightly painted private boat, so you can feast on biryani as you watch people crowding down to the water in the numerous ghats (steps), public gardens and temple precincts that line the shore.

Dakshinapan is a market devoted to Indian textiles and handicrafts. It is controlled by the government, so prices are fair and the choice huge: from saffron-coloured quilts to gossamer-fine Bengali muslin. Rendezvous at Dolly’s cafe, which is famed for its ginger-scented tea. 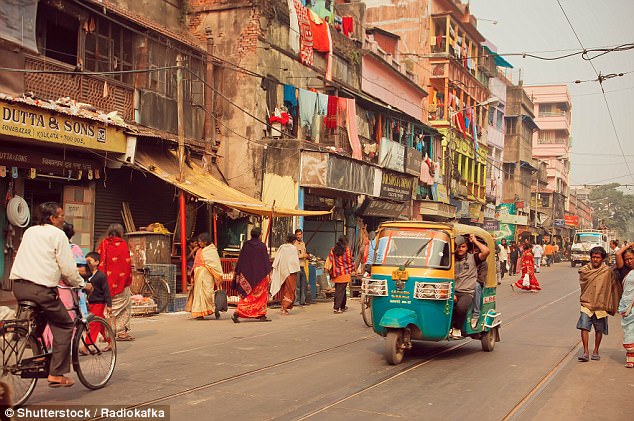 At first glance, the Indian city, formerly known as Calcutta, is a haze of pollution, incessant honking of horns and half-built skyscrapers with bamboo scaffolding hanging off them like cobwebs

People will tell you that the Victoria Memorial looks like the Taj Mahal. It doesn’t. But Lord Curzon’s grandiose, palace-sized, white marble monument to the Raj is splendid. Spend an afternoon people-watching in the formal gardens, where families loll on the grass in their glittering Sunday outfits.

Go, too, to South Park Street Cemetery, the 18th-century burial ground for the young Englishmen who came here to work for the East India Company and died with pathetic swiftness — to be commemorated with tombs as splendid as their lives were short.

If you prefer to eat indoors, try Flurys, the Art Deco tea-room where smart Kolkata ladies have been lunching on chicken and cucumber sandwiches for nearly a century.

There’s chai, of course, and lassi — sweet, salted or spiced, made with buffalo milk. A street vendor will chop the head off a green coconut and hand it to you with a straw.

On College Street in the university district, book stalls line the road and spread out around the shabbily grand Indian Coffee House. Here, waiters in spectacular headdresses are Gallically disdainful.

‘Coffee house,’ says one, crushingly, when I ask for tea.

Kolkata’s clubland is as elite as London’s St James’s, but worth penetrating if you can.

The Bengal Club (thebengal club.com), in a palatial house that once belonged to Victorian historian Thomas Macaulay, was originally for whites only. Today, the grandees in the leather armchairs are Bengali.

Non-members can attend events: there’s a concert of Sufi music while I am here.

The Calcutta Club (calcuttaclub.in) was founded in 1907, and open from the start to men of all races, but only recently to women.

The garden is a luxury in this crowded city and a lovely place to sip a sweet lime soda.

Retreat to The Rajbari Bawali, a heritage hotel two hours’ drive away.

From here, stroll into the village with its romantically tumble-down temples. Rooms from £79 B&B, therajbari.com.