The statistics are shocking — and you won’t have heard of them.

One in five patients admitted to intensive care with flu may contract a lethal fungal infection in their lungs called aspergillosis which can resist medicine’s best drugs.

Spores from this fungus are in the air all around us. They invade these patients’ lungs after an average of only three days in intensive care. And aspergillus kills nearly half of those it infects.

Most disturbingly of all, these victims are not the traditional prey of aspergillus fungus — vulnerable patients with failed immune systems — but young, otherwise robust people whose defences have been lowered temporarily by flu.

Did you know? One in five patients admitted to intensive care with flu may contract a lethal fungal infection in their lungs called aspergillosis which can resist medicine’s best drugs

So why haven’t you heard about this? The answer is that these statistics, published in the Lancet Respiratory Medicine journal in November, have been compiled by doctors at hospitals in Belgium and the Netherlands, where staff are extremely vigilant for aspergillosis.

In the UK, figures indicate a mere 0.2 per cent of all intensive care patients become infected with aspergillus.

Why the massive disparity? Experts warn it is not because Britain has fewer cases of aspergillosis. They say it is because UK doctors and pathology labs are failing to detect the fungus — not least because they aren’t looking for it.

When aspergillosis is detected in the UK, the diagnosis frequently comes too late — causing a mortality rate among severe flu patients nearly double that of our Dutch and Belgian counterparts. When it goes unnoticed, death is simply attributed to flu and associated complications.

‘It is entirely reasonable to assume that the real UK rates of infection are the same as in Belgium and the Netherlands,’ says David Denning, a leading authority on fungal disease who is professor of infectious diseases in global health at Manchester University, and runs the National Aspergillosis Centre.

He adds: ‘I am sure there are a lot of fungal infections in patients, but because professionals are not looking, they are not finding them.’

Aspergillus fumigatus, the fungus that causes the aspergillosis infection, is in soil, air, food and decaying organic material. It can form a grey, wrinkled cushion on damp walls and spreads via microscopic spores in the air.

When it invades a susceptible person’s lungs, it can grow into a lump the size of a tennis ball that can be difficult to eradicate. The infection can develop into invasive aspergillosis, which spreads from the lungs to the brain, heart, kidneys or skin. Its mortality rate can be as high as 90 per cent. 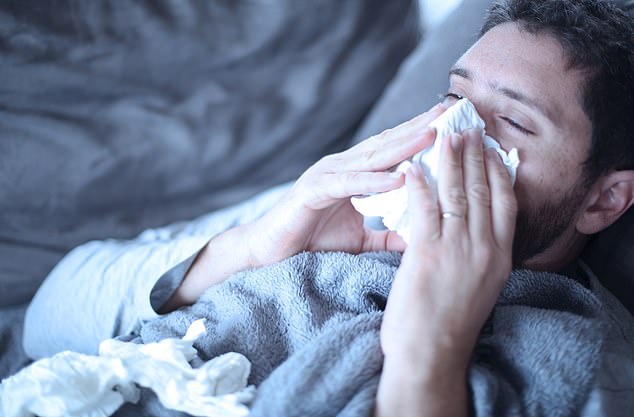 Risky: When Aspergillus fumigatus invades a susceptible person’s lungs, it can grow into a lump the size of a tennis ball that can be difficult to eradicate

Until recently, invasive aspergillosis was thought to afflict only people whose defences are laid waste by, for example, chemotherapy or a disease of the immune system such as Aids.

However, the Belgian and Dutch study shows that increasing numbers of otherwise healthy people are succumbing.

Indeed, late last year, the European Centre for Disease Prevention and Control issued a ‘rapid risk assessment’, warning that aspergillus infections in people with flu, but no underlying health problem, are increasing globally.

Last October, investigators at the U.S. Centres for Disease Control and Prevention reported that one-third of aspergillosis flu patients there are otherwise ‘healthy’.

The European risk assessment warns that doctors may miss such infections, because they don’t believe aspergillus can attack ‘healthy’ flu patients. As a result, they may die without clinicians noticing they had aspergillosis.

The report urged European authorities such as Public Health England (PHE) to ‘raise awareness about this issue among ICU (intensive care) physicians and clinical microbiologists’.

However, Professor Denning says PHE is neither monitoring the problem nor issuing warnings.

Professor Denning contrasts this with the vigilance in Belgian intensive care units: ‘Whenever a patient goes into a Belgian ICU with flu or any other lung condition, they give them a bronchoscopy examination (where a camera is threaded down the throat to reach the lungs) first to look for aspergillus,’ he explains. 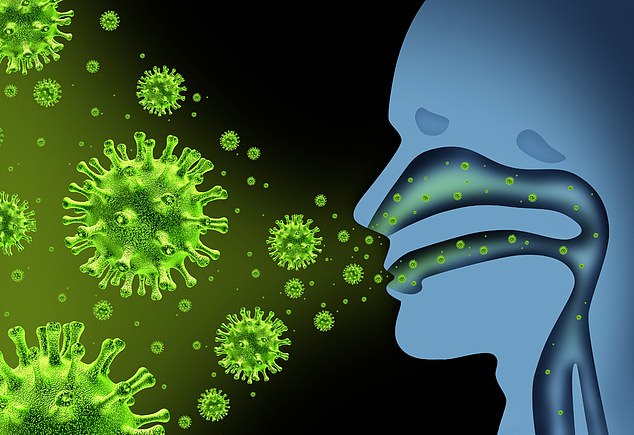 Until recently, invasive aspergillosis was thought to afflict only people whose defences are laid waste by a disease of the immune system such as Aids. However, the Belgian and Dutch study shows that increasing numbers of otherwise healthy people are succumbing.

‘They regularly re-test their patients. They are very proactive in detection and treatment,’ he adds. ‘This makes a huge difference in saving lives. The Belgians report a mortality rate of 45 per cent among flu patients with aspergillus. In the UK, the known figure is around 85 per cent.’

So why is aspergillus increasingly attacking flu patients? One theory is that having flu wears down a person’s immune system. Another factor could be that these patients are often given steroids to reduce their lung inflammation, and steroids suppress the immune system.

Meanwhile, a report in the Journal of Immunology last year warned that aspergillus and flu may together vastly overstimulate a healthy immune system, causing a reaction so inflammatory that it can be lethal. To make matters worse, the use of antifungal drugs called azoles both in medicine and agriculture has encouraged new super fungi that are resistant to our best drugs.

Calum Semple, a professor in child health and outbreak medicine (emerging diseases) at the University of Liverpool, fears the fungus may be infecting ‘healthy’ patients with other conditions.

‘With flu, aspergillus infection may be picked up more often because it can be difficult to detect the precise flu virus involved, so more tests are done. Now doctors need to think about it a bit more among other patients.’

Public Health England does not even collate figures about the rate of aspergillus infection in the UK. There is only an estimate made in 2016 by the National Aspergillosis Centre, extrapolated from infection figures seen in its patients. This suggested that up to 240,000 people in Britain had contracted aspergillus infections in the previous six years.

Public Health England has begun to compile infection figures for another superfungus — Candida auris, which can cause lethal blood and wound infections.

First detected in 2009, cases have been reported in more than 30 countries including Britain.

One Candida auris outbreak at the Oxford University Hospitals colonised 70 patients and freeing the hospital from infection took some two-and-a-half years.

In March, Public Health England’s surveillance team reported a total of 266 cases. By contrast Belgium has reported only one, France two and Germany seven.

Why does England score so high? A spokesman for Public Health England told Good Health: ‘We are detecting colonisations because we are looking for them. Most other European countries were not undertaking surveil-lance of C. auris.’

What’s more, Public Health England says that since 2016 it has been raising awareness about Candida auris among healthcare professionals and diagnostic laboratories.

The same hasn’t happened with aspergillus, laments Professor Denning. ‘There is a lack of urgency, particularly with pathology laboratories, about aspergillus,’ he says. ‘You are lucky to get results back in 96 hours. That is far too slow because the infection can develop so quickly.’

Professor Semple agrees that many laboratories need to work more efficiently. ‘The fungus tends to grow very slowly on pathology labs’ petri dishes, and can be ignored or dismissed as contamination from the environment.’

Dr Bart Rijnders, a consultant in infectious diseases at Erasmus University Medical Centre in the Netherlands, who led the study in The Lancet, told Good Health that he uses at least two different testing systems, as one alone can be wrong 50 per cent of the time.

One hope lies in new testing kits that can produce results from mucus or blood samples in half an hour, and cost as little as £10.

However, PHE says it does not support widespread testing. ‘The true incidence of aspergillus is not clear,’ it told Good Health. ‘So we cannot recommend routinely testing for aspergillus infections in all patients with severe influenza.’

Professor Denning maintains that advanced tests, along with increased vigilance by clinicians, are desperately needed.

‘If we have a flu epidemic, it may well combine disastrously in many patients with aspergillus infecting them opportunistically, and most often fatally,’ he says.

‘Flu strikes the young and healthy. The toll on society could be quite devastating.’