How the secret plotters dealt a final blow to Theresa May

Theresa May was nearly 20 minutes into Prime Minister’s Questions on Wednesday when the door of Andrea Leadsom’s grand Commons office swung open.

Last out was a pensive Ms Leadsom, who turned to Ms Truss as they filed down the wood-panelled corridor behind the Speaker’s Chair and said: ‘So that’s what to do. Let’s stay in touch on the WhatsApp’.

After Ms Leadsom’s resignation, and with backbenchers now in open mutiny, the Prime Minister realised the game was finally up, and started writing her resignation speech with her favoured adviser Keelan Carr

Later that evening, Ms Leadsom resigned as Commons Leader. It was the final plunge of the knife from the now notorious ‘pizza club’. The Mail on Sunday first revealed in November the cell of pro-Leave Cabinet Ministers which met in secret to try to stop Mrs May from diluting Brexit. Over boxes of takeaway pizzas, the group, which also included Home Secretary Sajid Javid, Transport Secretary Chris Grayling and Defence Secretary Penny Mordaunt, would debate how to steer Mrs May towards a ‘purer’ Brexit – and whether to pull the plug on her premiership by resigning in concert. They even had their own WhatsApp group.

Until last week, they had largely pulled their punches, with the only resignation from a group member coming when Dominic Raab quit as Brexit Secretary.

But on Wednesday the mood was different. As the group sipped cups of tea and coffee, Ms Leadsom made clear her anger over Mrs May’s disastrous speech the previous day in which she had raised the prospect of holding a second referendum – an idea which was anathema to Brexiteer Ms Leadsom.

She told the group that the speech went further than what had been agreed in Cabinet and said she felt her position was untenable – although she stopped short of asking the others to follow her lead.

Ms Truss was also ‘spitting’, said sources: ‘The PM has reached the end of the road.’

Mr Gove made it clear that he thought Mrs May should abandon plans to make a final attempt to win Commons support for her Brexit deal. Mr Cox repeated the argument he had made in Tuesday’s Cabinet that the deal should never be put to a second referendum. 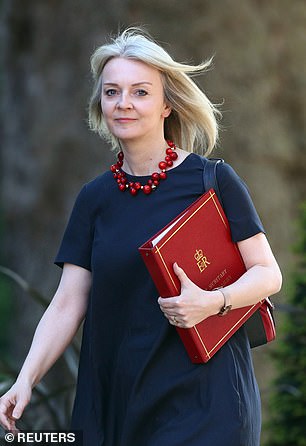 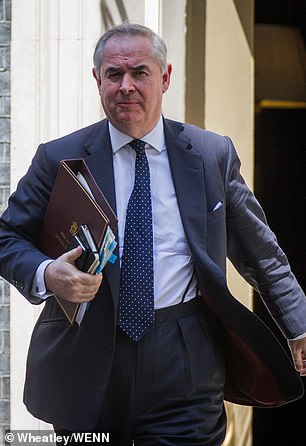 Over boxes of takeaway pizzas, the group, which also included Home Secretary Sajid Javid, Transport Secretary Chris Grayling and Defence Secretary Penny Mordaunt, would debate how to steer Mrs May towards a ‘purer’ Brexit

His views went down well in the room, but angered pro-Remain Ministers, with one saying: ‘This is the man who helped to push the PM towards striking a cross-party deal with Labour, which led us inevitably down the path to a “confirmatory” vote – and the man whose legal advice on the backstop helped to kill it.’

After Ms Leadsom’s resignation, and with backbenchers now in open mutiny, the Prime Minister realised the game was finally up, and started writing her resignation speech with her favoured adviser Keelan Carr.

It was as she prepared for the famous black door of No 10 to swing open to deliver her speech to the waiting media on Friday morning that Mrs May first broke into tears. Her appearance at the podium was delayed while aides helped her to recover her composure.

However, there was some joy for Mrs May’s team on the emotional morning. Since she had already made her decision to go, when Sir Graham Brady, chairman of the powerful 1922 Committee of backbenchers, paid a visit to Downing Street, it was no longer the expected showdown to demand her head. But it unexpectedly ended with Sir Graham losing his job as well. 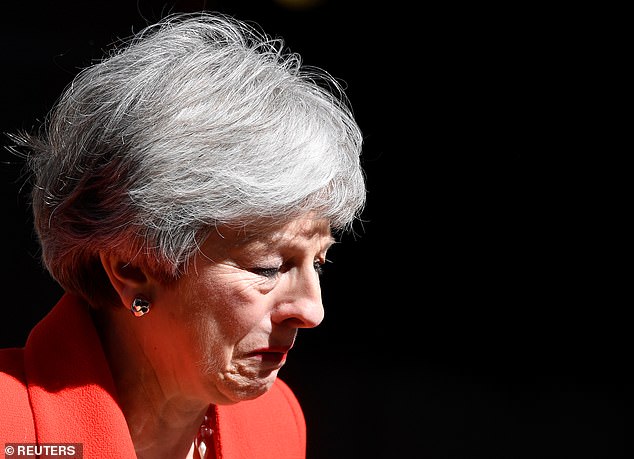 It was as she prepared for the famous black door of No 10 to swing open to deliver her speech to the waiting media on Friday morning that Mrs May first broke into tears. Her appearance at the podium was delayed while aides helped her to recover her composure

Among the PM’s core team – including husband Philip, media adviser Robbie Gibb, chief of staff Gavin Barwell and party chairman Brandon Lewis – there had been suspicions that Sir Graham was ‘a little more devious’, according to a source, than his straight bat public persona. So when he signalled he could himself run to succeed Mrs May, they spotted their chance for revenge. ‘It was pointed out, as he should well have known as the apparent expert, that he’s technically the returning officer for the leadership contest, so if he was even thinking about running he should have recused himself immediately’, an insider said. 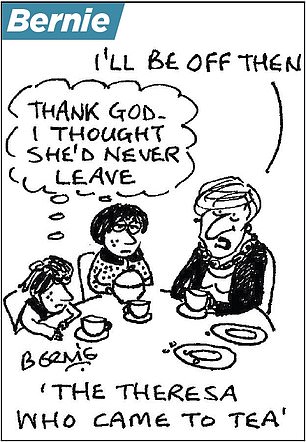 Sir Graham was shown to a side room to see if he would like to ‘have a think about his predicament’, but Mrs May’s team believe the fact he would have to stand down immediately came as a shock to him. He ended up being in the ante-room for close to an hour, before sheepishly putting out the contest timetable later that day in his deputy’s name. ‘There was a certain feeling of satisfaction to finally get one over on him,’ said a source.

Mrs May will spend the weekend brushing herself down at Chequers before heading to Brussels on Tuesday to meet her EU counterparts, including Angela Merkel.

While Mrs May’s relationship with France’s Emmanuel Macron has been at rock bottom since November, the two most powerful women in Europe have remained friendly.

Downing Street staff are also braced for drama during Donald Trump’s visit next month. Given his previous vocal support for both Nigel Farage and Boris Johnson, No 10 expects major interventions from the President could spark an angry backlash from a ‘demob happy’ Mrs May.

She has previously expressed irritation with Mr Trump. During the 2017 G20 meeting in Hamburg, leaders and their aides were at loggerheads over climate change. Having squeezed into a tiny room to hammer out a compromise, it was an extremely stern ‘come on, Donald’ from a ‘headmistress-like’ Mrs May that finally got the President to back down.

Mrs May won’t rule out return to frontline role 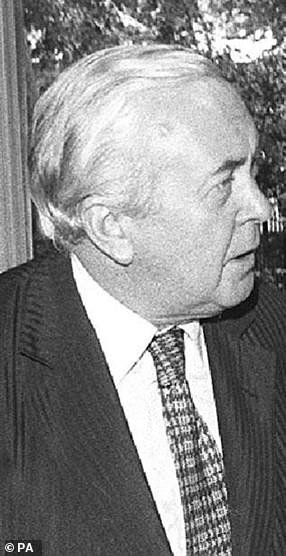 Theresa May could return to serve in a future Tory government, close allies insisted last night.

They said she would stay on as an MP until at least the next Election and was not ruling out another job in frontline politics.

The Prime Minister will also spend her final weeks in Downing Street on a policy blitz designed to fulfil her original pledge to tackle the nation’s ‘burning injustices’.

But she will distance herself from David Cameron by refusing to depart with an extensive resignation honours list.

Mrs May’s team led the chorus of condemnation in 2016 after her predecessor handed out peerages and gongs to 46 close aides, friends and financial backers in one of his final acts as Prime Minister.

Mr Cameron’s spree of honours drew unfavourable comparisons with Harold Wilson’s infamous 1976 ‘Lavender List’ that sparked uproar over awards that were given to a number of controversial businessmen.

But a close ally of Mrs May told The Mail on Sunday yesterday: ‘There will be none of that with Theresa. She came in pledging no more gongs for mates, so if she even does a list, it will be extremely pared back.’

The ally added that she was ‘not going to do a Cameron’, who quit politics just a few months after resigning as Prime Minister.

The friend said: ‘Theresa is not going to run away and she loves being a constituency MP.

‘She doesn’t need money so never say never to one day serving the country again.’

Mrs May’s closest aides, including her chief of staff Gavin Barwell, communications chief Robbie Gibb and long-term adviser JoJo Penn, have been conducting secret ‘legacy meetings’ in Downing Street since the Prime Minister signalled she would step down if MPs backed her Brexit deal.

After the failure of Mrs May to secure her flagship EU deal, aides are scrambling for domestic issues to champion in Mrs May’s final days in power. That is despite the fact that Trade Minister George Hollingbery, her former parliamentary aide, insisted on Friday that ‘this is not a Prime Minister who is worried about legacy’.

Government sources said there would now be a series of announcements before she left office in line with her original pledge on becoming Prime Minister in 2016 to tackle burning injustices.

A source said: ‘She has a few weeks before she goes to get some big announcements out there. There’s plenty in the drawer that has had to stay there for three years because of Brexit.’

That begins today with an announcement through Education Secretary Damian Hinds to get better value for university students’ tuition fees.

Mr Hinds will call for an end to so-called ‘low-value’ degrees which fail to give graduates enough future income and attacks those universities which prioritise ‘getting bums on seats’ over high-quality courses worth paying for.