How to spot a homegrown Aussie -they’re not wearing a face mask: Considerate migrants more than twice as likely to cover up for coronavirus

Migrants are more than twice as likely to wear a face mask during the coronavirus pandemic than people born in Australia, government data has revealed.

While masks were now compulsory outside the home in Victoria, as part of a Stage 4 lockdown, other states are only recommending people to wear them when they cannot socially distance.

Australian Bureau of Statistics data, from before the second wave, showed about three-quarters of Australians had shunned the mask.

Those born in Australia were least likely to cover their faces in public, with just 20 per cent of them donning a face mask.

By comparison, 42 per cent of migrants have worn a protective facial covering, the ABS figures showed.

People born in Australia are half as likely to wear a face mask compared with migrants, government data has revealed. The message about face masks isn’t getting through with three-quarters of Australians overall failing to put one on during a four-week period. Pictured is self-described psychic Lizzy Rose protesting against face masks

The numbers were collected in May, as each state gradually emerged from the first series of Stage 3 lockdowns.

Across Australia, just 27.6 per cent confirmed they had worn a face covering during the month before the survey, official data showed.

In Victoria less than a third, or 31.2 per cent of respondents, had donned the protective wear.

That was even lower than the 34.2 per cent figure for New South Wales.

Since the ABS survey was taken, Victoria introduced $200 fines for those who breached public health orders by leaving home unmasked.

Melbourne had been the home of most anti-maskers, including self-described psychic Lizzy Rose who caused a scene at a Bunnings hardware store by refusing to obey the rules. 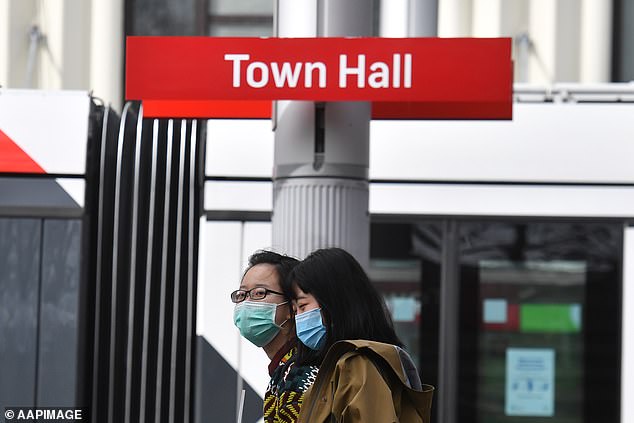 Those born in Australia were even less likely to cover their mouth in public with just 20 per cent of them donning a face mask. By comparison, 42 per cent of migrants have worn a protective facial covering, Australian Bureau of Statistics data showed. Pictured are pedestrians in central Sydney

She even made a video of herself burning face masks declaring: ‘We the people do not consent to these draconian laws.’

Migrants are also taking precautions in other ways with 62 per cent of them avoiding public transport compared with just half, or 49 per cent, of those born in Australia.

When it came to being careful, 95 per cent of all Australians had practised social distancing, with three-quarters avoiding public spaces.