How to avoid the 0% credit card interest traps

Household debt is becoming a growing concern, with experts worried consumers are taking on debts they cannot afford to pay back.

Credit cards with long 0 per cent deals attached can tempt people into taking on debt piles that cause them difficulties further down the line, drawing people in with tempting terms of up to 30 months on purchase cards and 43 months for balance transfers.

Lenders don’t offer these deals for your benefit. They are banking on the fact that you will fall foul of the small print and end up paying interest on the whole lot or that you will forget to pay it off in time.

But sensible borrowers can use these deals to their advantage – here’s how to use play the system safely and avoid the traps.

Experts have labelled the surge in credit cards offering interest-free promotions a ‘ticking time bomb’ as lenders are betting on the fact that borrowers won’t repay their debts before standard interest kicks in, and they begin to make a profit.

The fear for consumers is that the jump in borrowing and a rush of tempting 0 per cent deals comes at a time when families finances are increasingly squeezed with inflation on the rise and Bank of England figures show that savings are at their lowest since the financial crisis.

While 0 per cent interest deals can be a useful tool if used sensibly, they also encourage people to spend without considering whether they will be able to afford to repay at the end of the term.

The 0 per cent interest trap

Credit card companies don’t offer cheap credit or to waive interest to help borrowers out sadly. They are banking on the fact that at the end of the 0 per cent term, borrowers won’t have paid off their balance or will have spent more on their card.

Popular interest-free purchase cards are some of the most dangerous if not used correctly.

The lure of interest-free spending encourages some borrowers to rack up bigger balances, which they can later struggle to clear.

Card providers rarely inform borrowers when these 0 per cent deals are due to end and if they haven’t paid off their balance, anything left on the card will begin to clock up interest of around 18 or 19 per cent, resulting in eye-watering bills.

Balance transfer credit cards, which offer similar interest free terms, allowing consumers to shift existing debts to them for a small fee, can also lead borrowers into the same trap.

With promotional offers lasting as long as 43 months, it is easy for borrowers to lose track of when they need to clear their debts.

In addition to this, borrowers can easily land themselves in hot water if they spend  beyond their limit or miss a monthly repayment as this forfeits the 0 per cent term altogether. 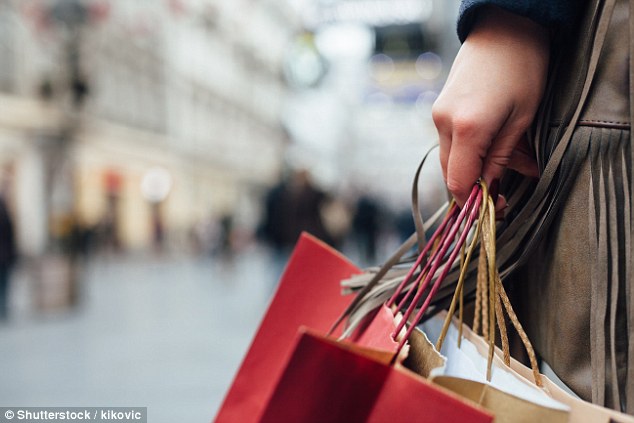 Spending spree: Leave your card in a safe place or cut it up completely to avoid temptation

So should you avoid these deals completely?

The golden rule with any type of credit card is to be disciplined about your repayments.

If you have no 0 per cent interest deal this usually means paying off the balance each month.

Or if you are using your card to spread the cost of existing debts, interest free, it means making sure you have a repayment plan in place to ensure your balance is clear before the standard rate kicks in.

While these long interest free periods can trip you up easily if you are not careful, they can also be a useful tool if used correctly.

They are often favoured by people looking to make home improvements or buy a car – providing a free alternative to expensive financing options or personal loans particularly if you need less than the golden £7,500 – £15,000 which has the most competitive rates.

Equally if you play the system, balance transfer offers can help you get on top of existing debts.

They allow you shift debts from other cards to an interest-free term for a fee of around 2-3 per cent so that you can concentrate your repayments on clearing the debt quicker rather than paying off hefty interest charges.

THE TRICKS TO AVOID THE 0 PER CENT INTEREST TRAP

The key to success is to make sure you are disciplined about your debt.

If you do this, you can make a 0 per cent interest card can work for you, rather than to the benefit of the credit card company.

That means if you have a 0 per cent interest deal, making sure you have repaid it well before they whip away the 0 per cent promotion.

Whether you have a balance transfer card or a purchase deal, the best way to do this is to sit down and work out how much this means you will need to repay each month.

Then make sure you set up a direct debit from your account for that amount.

This will also make sure you never rack up late or missed payment fees.

The safest way to use these cards is to keep them for the purpose of repaying the debt.

To avoid temptation to run up a bigger bill by spending on the card, it is best to ditch the card from your wallet, or cut it up completely.

If you can’t spend more on the card, you will also avoid any penalties for spending beyond your limit. This usually means a £12 fee and a mark on your credit score.

Arguably the longer the 0 per cent interest term the more time you have to forget about the balance sitting on your card, and the more likely you are to fall into the trap.

But to balance this, the longer the term, the longer you have to clear your debt before interest kicks, and you can avoid any shock bills.

One of the most difficult types of card to manage are those that offer both 0 per cent interest on balance transfers and purchase.

If you are trying to spread the cost of existing credit card debt it isn’t a wise idea to use your card for spending as well as it inflates your balance further and makes it harder to ensure you repay in time.

In addition, the interest-free terms on purchases and balance transfers offered on a dual purpose card are often slightly different lengths, meaning more opportunity for you to lose track of when each end.

Which cards let you freeze interest for the longest?

Currently the AA and Halifax come top when it comes to the longest interest free term on purchases.

These cards allow you to spread the cost of a large purchase or period of increased spending for 30 months. After than interest kicks in on your whole balance at 18.9 per cent.

>Read our round-up of the best cards for spending

When it comes to balance transfer deals you will want to consider both the interest free term and the handling fee.

The longest deal available comes from MBNA lasting 43 months with a 3.29 per cent balance transfer fee.

Sainsbury’s Bank comes a close second at 42 months with a 2.3 per cent fee, and there are a handful of banks offering 41-month terms.

If you are certain you will be able to repay in a shorter term you can cut down on transfer fees.

Sainsbury’s Bank and TSB offer the cheapest deals. Both charge no fee to shift your debt and apply no interest for 28 months.

Santander has a 41 month interest-free card with a 0 per cent handling fee but it comes with a £3 monthly fee.

>See our pick of the longest and cheapest balance transfer deals