How to explore Slovenia’s capital on a shoestring budget

Slovenia for under £100 per night! How to explore Ljubljana on a shoestring budget

Ljubljana, Slovenia’s capital, sits on the meandering river Ljubljanica with dramatic mountains rising to the north.

The city has a population of fewer than 300,000 and a centre of narrow streets which run from cafe-packed riverbanks to a hilltop castle.

Art galleries and museums are interspersed between splendid art nouveau and neo-classical buildings.

Peaceful: A boat cruising the Ljubljanica river. The city has a population of around 300,000

Tucked in a corner of the old town, Hotel Galleria is a great little hideaway in a distinguished 17th-century building in the heart of the city. There are 16 rooms, all elegantly dressed with lilac and soft-grey modern decorations. Some of the back rooms have views of the castle. Galleria is family-run and friendly. B&B doubles from £66 (hotelgalleria.eu). A three-night stay with return flights from London Stansted is from £305 pp based on two sharing (easyjet.com/holidays)

From the outside, this may look like a grim, Tito-era apartment block — which originally it was — but inside is a slick hotel run on ecological principles with rooms spread over a dozen floors (ask for one of the recently refurbished ones on a higher floor for great city views). It’s a short walk to all the attractions. Honey from the rooftop beehives is for sale in reception. B&B doubles from £64 (hotelpark.si)

The 200-plus rooms at this central hotel — a moment or two from the river — are reasonably sized and contemporary styled with black and white pictures of Ljubljana landmarks on the walls. Expect wide beds, good shower rooms and balconies on the best corner rooms (ask for these, but expect to pay £35 extra). B&B doubles are from £63 (cityhotel.si). 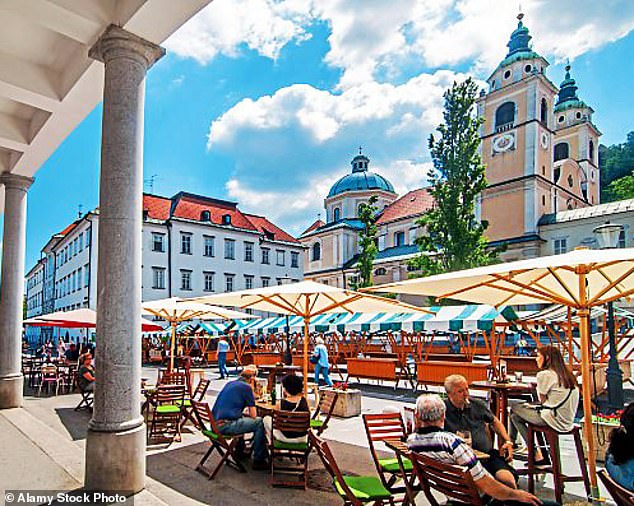 Cafe culture: By the Market Colonnade, which is located between the city’s two most famous bridges

Splash out a little on this 20-room, river-front hotel with a brilliant rooftop pool and deck with sunloungers. Drinks are served here as well as at the lively bar with outside tables by the waterfront. This is one of the most fashionable hotels in town — it’s a member of the hip Design Hotels group. Rooms are in shades of grey with modern art and leather armchairs. B&B doubles from £97 (vanderhotel.com).

Just off the river in the old town, Vino & Ribe delivers what its name promises: wine and fish. This tiny, tapas-style restaurant has seating for about ten. Grilled sardines and red herring are to be had along with fresh calamari and octopus salad. It costs about £13 for a decent Slovenian carafe of wine and a couple of dishes. Address: Stari Trg 28.

This bustling restaurant’s name comes from the weight of the suckling pig used in its signature dish (popular with locals). It also serves excellent pizzas and salads; a pizza with a glass of wine is £10. After a trip to the hilltop castle, stroll down the long narrow steps and make this your target for a late lunch. Address: Gornji Trg 33.

Between the city’s two most famous bridges — Dragon Bridge and Triple Bridge — the Market Colonnade is an extraordinary riverside structure designed by famous local architect Joze Plecnik to resemble a Greco-Roman temple. It overlooks the market and is home to little cafes where delicious veal stews are to be had for £6 (try Grand Cafe Ljubljana) and coffees and cake for £1.75 (try Pekarna Pecjak). Address: Glavna trznica. 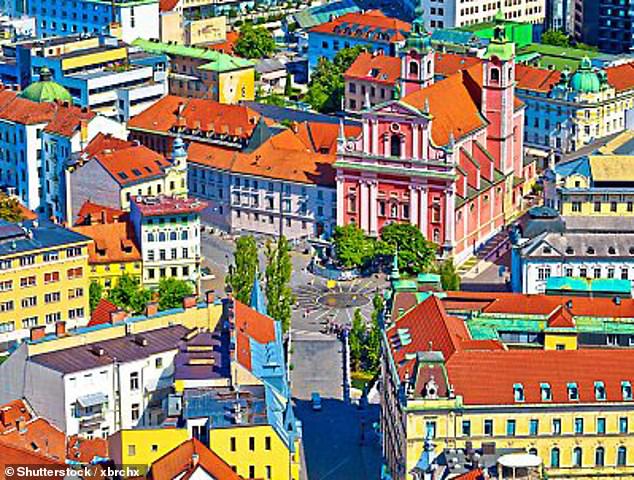 Above the Market Colonnade, on the other side of the river, this is the place to go for ice-cream. Flavours include tiramisu, mango and (especially good) chocolate and raspberry; £1.55 a scoop. You may have to be patient to get one of the pleasant outside tables (cacao.si).

EasyJet has return flights from London Stansted from £61 (easyjet.com). Taxis from the airport — around a half-hour drive from the city centre — cost about £25, or you can take a shared airport taxi for £8.70, which will drop you exactly where you need to go; kiosks are to the left as you exit the baggage hall.