How to make your property pay without moving out

After decades of rising house prices, many homeowners have found themselves property rich but cash poor.

In other words, you might be worth a lot of money on paper because your home has soared in value, but you can’t get your hands on it until you sell.

Well, the good news is that you don’t have to move out to turn your house into a cash machine, as these four entrepreneurial property owners show.

By renting out spare rooms or driveways and even letting TV crews film in your home, you can use the extra money to pay for a holiday or help your children get onto the property ladder. Best of all, our homeowners say they have had amazing experiences and met wonderful people along the way. Here they share their tips on how to turn your home into a money spinner without getting stung…

Rent out your garage

Father-of-three Raymond Brown has converted his garage in Cambridge into a tiny house with a double bedroom and en suite bathroom. It was Raymond’s late wife Lisa, a GP, who first came up with the idea of turning the space into a spare bedroom. It has taken a couple of years for Raymond, 59, a crime reporter on the local newspaper, to make the project a reality following Lisa’s death from cancer in 2016 at the age of just 43.

In the end it cost £22,000, but the property is now listed as a ‘quirky wee cottage’ on Airbnb and is already making £2,200 a month. It has only been up on the website since February but it is booked up for the next two months, so Raymond looks set to bring in £24,000 a year. It means he will recoup his investment and then have a substantial income boost.

Raymond’s new partner Shelley, 40, an entrepreneur, deals with most of the bookings and they share the burden of laundry and cleaning. He says: ‘We had to dig up the garden for pipework and for months it looked like a wet summer at Glastonbury. But it was worth the upheaval . . . I love meeting guests from around the world. Many are parents visiting their children at university.’

‘Lisa would have loved what we have done. It will provide a nest egg to get the boys through university and it has made our home even more special.’

Turn your home into a film set

When Alyson Jackson-Petts received a knock on the door of her barge from a ‘charming’ BBC location scout called Casper, she was delighted. He wanted to use the interior designer’s boat, which is moored just off the River Thames, for a scene in Silent Witness. What’s more, he would pay her handsomely for it and promised to take care of her floating home.

Now Alyson, 56, is planning to promote her boat through location agencies and on her website Tristram Design, after being told that barges are in high demand. The boat was nearly used in a scene for the hit drama Killing Eve, but the producers decided the tilt on the deck made it too tricky to film. She says: ‘Silent Witness is one of my favourite shows so it was wonderful to meet the actors starring in that scene and see how it’s put together.’

Alyson is not allowed to reveal how much the BBC paid her for filming, but location scout Simon Hassard says that good properties can earn between £2,000 and £3,000 per day. 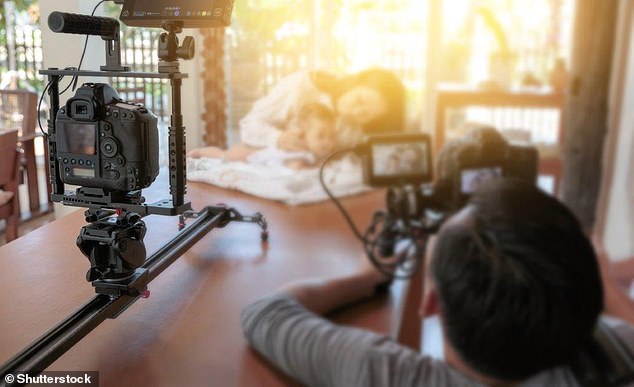 According to TV location scout Simon Hassard, good properties can earn between £2,000 and £3,000 per day when used as film sets

Former hairdresser Andrea Downton and her husband Daniel, a farrier, bought an old shepherd’s hut to turn into a lodge for glamping. Andrea, 41, has been working full-time running the couple’s B&B business near Bristol for the past 12 years, as well as looking after their four children Joseph 11, Samuel, nine, Zach, six, and Rosina, four.

While living in their Sixties bungalow, they converted outbuildings into two self-catering barns called Hillcroft Accommodation. Demand kept increasing, as it is an ideal spot for city-dwellers seeking a cheap, easy getaway. It is only a mile from Bristol Airport so many people choose to stay there before flights.

The couple needed more room to accommodate guests so they decided to cash in on the trend for ‘glamping’. They bought a Lotus Belle Tent, which looks like a giant bulb of garlic and can fit a brass double bed, and set up the website goblincoombeglamping.co.uk. Last year they bought an old shepherd’s hut from a friend for £8,000, which can also sleep a small family. They have already made their money back and can watch the profits roll in.

Retired businessman Taran Mundra, 68, is a full-time carer for his wife Kashmir, 69, at their home in Derby. She has been suffering from early onset Parkinson’s since her 40s but now requires round-the-clock care. Taran decided to rent out his driveway through JustPark after seeing staff and visitors at the local hospital struggling to find a spot.

The hospital charges visitors £9 a day, so Taran was happy to let families, doctors and nurses park on his driveway for just £2.50. As it’s big enough for four cars, he makes £1,200 a year. Taran says: ‘They are nice friendly people and I get a mixture of ad hoc bookings and longer-term clients.’