How to spend 48 hours in Riga, Latvia

Arrive in Latvia’s capital and you can feel the buzz of Baltic optimism in the bracing air. Riga is a welcoming, walkable city that’s awash with music, history, art and nightlife.

A recent survey named Riga the best-value city for those seeking a European winter break.

Low-cost airlines and a glut of great hotels mean flight savings can be splurged on luxury accommodation, such as the chic Bergs Hotel (slh.com/hotels/hotel-bergs), a favourite with Sir Elton John, Lady Gaga and Sting.

Vibrant: The colourful buildings of the Old Town

Get your bearings by wandering the Old Town’s cobbled streets. Every era in Riga’s rich history has left its mark: medieval defences, Gothic churches, baroque townhouses and stolid Soviet-era museums. Its heart is Doma Laukums (Cathedral Square), site of the huge medieval cathedral. More interesting is the House of the Blackheads (liveriga.com; £5 entry) on the square’s southern side. Built to house bachelor Hanseatic traders and sailors, its name is derived from the patron saint Maurice, traditionally depicted as an armed Moor. The Soviets destroyed it after the war – its Gothic-Dutch Renaissance architecture was ‘decadent’ – but after independence in 1991 it was rebuilt.

Many of the city’s grand Viennese-style cafes were also eradicated during the Soviet occupation but the genre is returning. The Art Deco cafe Kuze (kuze.lv) opposite the parliament building is the perfect place for a hot chocolate.

Understanding Latvian history will enhance a visit. In the mid-1960s, the Soviets built a Museum of the Revolution in the Old Town. In a stroke of post-independence revenge, Latvia turned it into the Museum of the Occupation (okupacijasmuzejs.lv/en). The most touching exhibits are personal keepsakes, from chess sets carved from scrap and wood in the gulags to heartbreaking, hastily scribbled notes thrown from trains by deportees to Siberia. 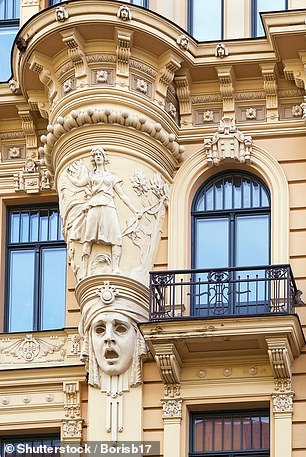 Decoration on a building in the Art Nouveau district

Fight the urge for a post-lunch snooze with a walk around the beautiful Art Nouveau district. Riga boomed in the late 19th and early 20th Centuries and has one of the largest collections of Art Nouveau buildings in the world. Alberta Iela, just north of the Esplanade, is the best single street for viewing such treasures. The city’s Art Nouveau Museum (jugendstils.riga.lv/eng/muzejs) provides a fascinating glimpse of life inside these homes. Stroll back towards the Old Town through Kronvalda Park, built during the days of tsarist rule, and enjoy a diversion to the Latvian National Museum of Art (lnmm.lv/en), whose collection includes many Latvian impressionists.

For a reasonably priced early evening dinner in the park, a good place to try is Pagalms (Courtyard) behind the National Theatre building. Its low lighting, tiled walls and pop-up feel attract a cool clientele. It’s also ideally placed for an evening at Riga’s small but beautiful Opera House (opera.lv/en), which showcases Latvian music and ballet with good seats for about £17.50.

The handy free tourist magazine Riga In Your Pocket (you can download the free app at iyp.me/app) lists the programme of events and is available at all tourist offices and museums.

No trip to Riga would be complete without visiting the Central Market, south of the railway station. With 1,200 vendors, it spreads across five enormous former Zeppelin hangars where you can find everything from fresh farmer’s cheese and lemongrass to pig snouts and the local firewater, Black Balsam, a potent liqueur. Caviar fans can snap up 100g tins for £20. 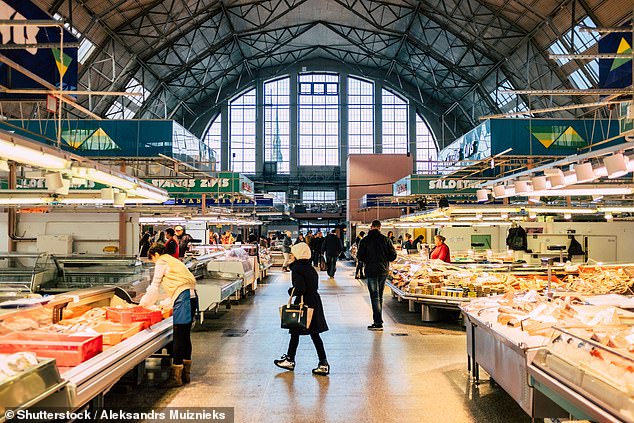 Spoilt for choice: The cavernous Central Market, home to 1,200 stalls

Head for lunch at Valtera (valterarestorans.lv/en) in the Old Town. Its modern twist on traditional Latvian cuisine – think venison, pork and freshwater fish – uses local ingredients. Its rye bread is celebrated, and try one of the local fruit wines.

For a city steeped in history, it’s fitting that the jewel of choice is amber, which has been washing up on Baltic coasts for millennia. Those in a rush can buy amber at any souvenir or jewellery shop; for local colour, though, visit the stalls behind St Peter’s Church (peterbaznica.riga.lv/) and its towering steeple or along Valnu Iela behind the Hotel Riga.

For a quirky supper on the same street, try Istaba, which houses an art gallery and tiny restaurant. Expect to pay about £40 for two with beer or wine. Seating at Istaba is limited, so gastronomes might prefer Vincents (restorans.lv). Chef Martins Ritins’s passion for seasonal ingredients has attracted the discerning for more than a decade. Prices are reasonable, with mains, such as saddle of roe deer in red wine, for about £30 – a memorable way to round off a flying visit to this hip little capital.