Given the last two turbulent years and the challenging economic backdrop, it seemed a safe bet that the number of people setting up their own businesses might be falling. But it looks like the opposite could be true.

New research from small business support organisation Enterprise Nation indicates a third of adults are thinking about starting a business or ‘side-hustle’ this year – with almost half of those aged between 18 and 24 considering such a move.

Of those seeking to start their own business, just under a third said they were looking to follow their dreams or make money out of a skill or hobby.

Emma Jones, founder of Enterprise Nation, which runs its annual StartUp Show for entrepreneurs this month, says: ‘There is a huge appetite to start a business in the UK.

Recessions are well known for motivating people to start up in business. Usually, the trigger is unemployment, but this time many are planning to start a side-hustle while holding down a full or part-time job.’

We speak to some of those who have started up their own business and find out how they did it.

Tess Caven, 56, from Essex, is launching the charitable walking app Trundl in the next few months with founder, Hil Mines, 54, from Cheshire.

‘A recession might seem like a crazy time to launch a new business, but many people have new business ideas when times are tough,’ says Tess.

‘Only the brave launch when there’s not a great deal of money floating around. It means you have to really add value and fine-tune your business idea to get a better chance of success. Plus there’s a general feeling post-Covid of the need to make the most of every moment you’ve got.’

Trundl, which kicks off after nine months in ‘soft-launch’ mode, helps to transform a daily walk into a charity fund-raiser.

Users sign up for £3.99 a month and press ‘Go Trundl’ on their app when heading out for a walk. The more steps they walk, the greater the amount of money donated to the chosen charity by Trundl.

At least 10 per cent of income is given to outdoor and mobility charities, such as National Parks and The Trussell Trust.

Commercial brands can sign up to Trundl to offer discounts on products such as walking boots and pet food, which also generates income for the website’s charity partners.

Companies can buy Trundl memberships for their staff, or sponsor specific walks.

Tess adds: ‘Trundl isn’t a charity itself, but a social enterprise which raises money for charity. It is creating a community of people who love their daily walk or run and want to put their steps to good use.’

Former telecoms employee and consultant Alex Birtles, 36, is co-founder of In Good Company, a website and app which helps people find the best ethical and sustainable businesses in their local area.

The website goes live soon, initially concentrating on London before expanding to other parts of the country. Over the past year, Alex has been working hard with co-founder Sarah Kingston on building the site as well as establishing partnerships with local retailers.

Alex says: ‘The pandemic focused people’s minds on their local area and community spirit. I wanted to build something which makes it easier to find local businesses. Everyone has less disposable income these days so where they choose to spend their money is really important.’

Alex and Sarah both work full-time on In Good Company and have funded the business through a mix of grants and raising money from friends and angel investors.

The app will be free to users, but will generate income from businesses signing up to the site.

Alex says: ‘We’ve signed up 30 businesses, from a zero-waste grocery store, to an ethical coffee company in Shoreditch, East London, and a sustainable homeware company. We’ve partnered with a number of accreditation providers, like the Living Wage Foundation, so all the businesses we list are verified.’

She adds: ‘I previously worked in large organisations, so it’s been quite a journey starting a business in my mid-30s. But I love it.’ 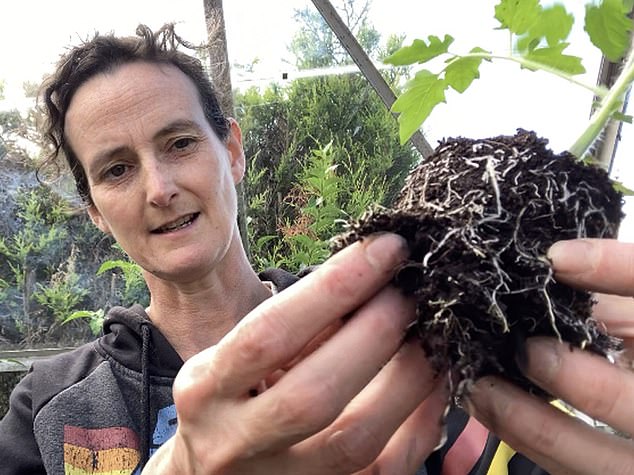 Gardening passion: Holly Tyers launches Can I Dig It? next month

Holly Tyers, 49, from Batley in West Yorkshire, is a keen vegetable gardener but with busy, full-time jobs, she was never able to devote enough time to her passion. That’s when she came up with the idea of The 15 Minute Gardening Club.

Subscribers receive packets of seeds in the post every month along with instructions about how to grow them.

‘It’s perfect for the permanently busy person who wants to live a bit more sustainably,’ says Holly, who launches her company Can I Dig It? next month. She adds: ‘Subscribers will also receive bite-sized chunks of information and motivational messages which will tell them exactly what they need to do with the seeds – and when.’

Subscriptions cost £24 a month and customers will receive four packets of seeds each month – everything from lettuce and beetroot to sweetcorn, carrots and onions.

‘People might think they haven’t got the time to grow their own vegetables,’ says Holly. ‘I will show them how to grow lettuce all year round and how to plan their vegetable patch.’

Mark Morton, 54, from Bromley in Kent, was bullied at school and suffered lasting effects to his mental health. Later in life, he decided to do something about it.

‘I finally realised I needed to tackle it, and did so with a combination of therapy and self-help, including journaling,’ he says.

Journaling, the practice of writing down thoughts and feelings to help understand them better, is good for mental health but, says Mark, ‘it’s often hard to know where to start’.

This prompted Mark to set up Journalise, creating and selling journals which have a page per day with an exercise to do, or a prompt to provide meditation and relaxation.

‘I’ve included things such as habit tracking, and a goals list, so you can make a note of what you do every day and where you’d like to get to,’ says Mark. ‘You can write down your gratitudes, or things you want to deal with. It means you’re not just staring at a blank page wondering what to write.’

Mark found a manufacturer to produce the journals and is launching a Kickstarter campaign later this month to raise funds for his fledgling business.

‘It would be great if it helped people with their mental health,’ says Mark. ‘After everything that’s happened in the last few years, it feels like the right time to launch.’