How to turn off pesky weight loss ads on Instagram

Size-inclusive, non-diet trainer Kira Onysko took to Instagram to share the hack ahead of the New Year when a lot of people are looking to make resolutions

A personal trainer has revealed how to get rid of new year’s weight loss advertisements on Instagram in four simple steps.

Size-inclusive, non-diet trainer Kira Onysko took to Instagram to share the hack ahead of the New Year when a lot of people are looking to make resolutions.

To turn off the advertisements go to settings, ads, ad topics and search for ‘body weight control methods’.

This should work for most, but if you can’t find anything under that heading then play around with different terms including weight loss, diet and fitness.

‘There’s a little popup at the bottom that says “we changed category names to make them clearer!” so now “body weight control” doesn’t exist but there are a ton of smaller weight loss categories disguised as “fitness and health”,’ one woman said.

But others said they found it under the original heading. ‘Body weight control is showing up on mine. I wonder if different people have been targeted differently and it doesn’t show up for some,’ said another.

The post went viral with dozens of people commenting to explain what they had removed.

‘I just removed anything related to that, like “muscle” “CrossFit” and “nutrition”.’ one woman said.

‘I was able to weed through a lot of health/fitness ones, but nothing in the spirit of “weight control/loss” was coming up for me – and as someone who has struggled with ED in the past, I would absolutely be targeted based on search history. hope everybody stays safe,’ explained another.

Others asked why people don’t just ‘ignore’ the ads like they would when watching television. 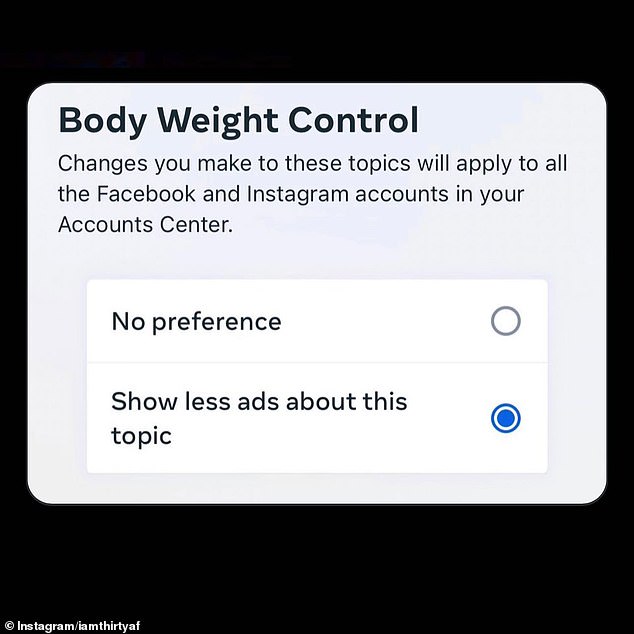 She explained you have to press the ‘slow less ads’ button 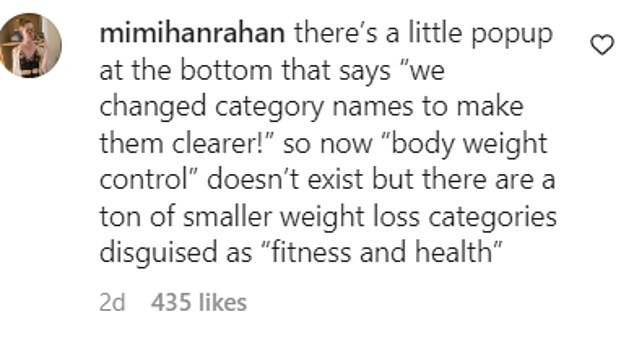 ‘Why not see all of the comments confirming how triggering these ads can be for people and simply ignore the post? Why go to all the trouble of typing out this comment? It definitely took as much time as changing a setting would,’ one person said.

Would you turn the ads off?

‘Same idea as a recovered alcoholic not wanting to see ads for alcohol. It’s worse than just an annoying commercial,’ said another.

Some people were less unimpressed with the results.

‘Unfortunately, I have already done this and it really never made any difference. They just swap the ads for shit like Noom, “lifestyle” apps that are really just diet apps. I also get a lot more ads for useless and possibly dangerous vitamins and supplements, for “health” research that focuses on weight… They figure out the loopholes,’ one person said.

One woman shared her own hack: ‘I changed my gender to “prefer not to say” and the weight loss ads stopped,’ they said.

And it works for other categories too.

‘This also works for women in their 30s who chose not to have children, who want to mute: motherhood, toddlers, baby care,’ one woman said.