Victoria had the best social distancing in the nation as its horror second wave began – indicating just one person may have been responsible for its deadly COVID-19 outbreak.

But a report compiled by Melbourne’s highly-regarded Doherty Institute has revealed residents in the state are actually taking social distancing more seriously than those elsewhere in Australia.

Using information from population surveys and mobility data from Google, Facebook, Apple, researchers found Victoria’s estimated effective reproduction rate beat all other states with a level on July 1 of just 0.92.

People wearing masks in Union lane in Melbourne on Sunday. Victoria is the best at social distancing in the country despite its horror second wave in recent weeks

The figure estimates the number of people any given member of the population would transmit the virus to if they were to become infectious.

HOW GOOD IS YOUR STATE AT SOCIAL DISTANCING?

‘What it says is an unlucky, random event has led to dramatic consequences in Victoria of an enormous outbreak. It has probably restarted from one or two or a very small number of infections.’

The institute’s data also revealed on July 1 – as the state’s second wave surged – the average number of non-household contacts per day for each Victorian was just 5.9.

By comparison, New South Wales had 8.1 contacts and Northern Territory residents were the most social in Australia with 11.5 contacts.

Deakin University epidemiologist Professor Catherine Bennett said Victorians should be credited for their adherence to social distancing and that if the second outbreak had happened in NSW the case numbers may have been worse.

‘We’re still the best in the country on July 1. It’s important that Victorians are acknowledged for that. It’s a win, but it’s not enough,’ she said.

The data comes as an inquiry into Victoria’s bungled hotel quarantine program begins on Monday.

The probe will be led by retired judge Jennifer Coate, assisted by Tony Neal QC. 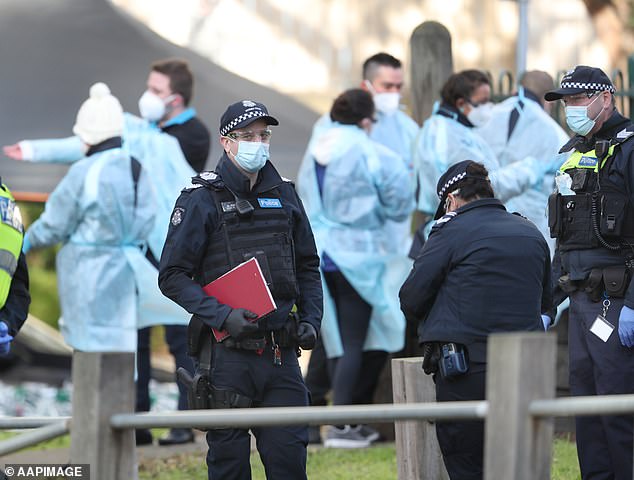 Researchers found Victoria’s estimated effective reproduction rate – based on mobility data from Facebook, Google and Apple – beat all other states with a level on July 1 of just 0.92. Medical workers and police are pictured at a Government Commission tower in North Melbourne on Saturday 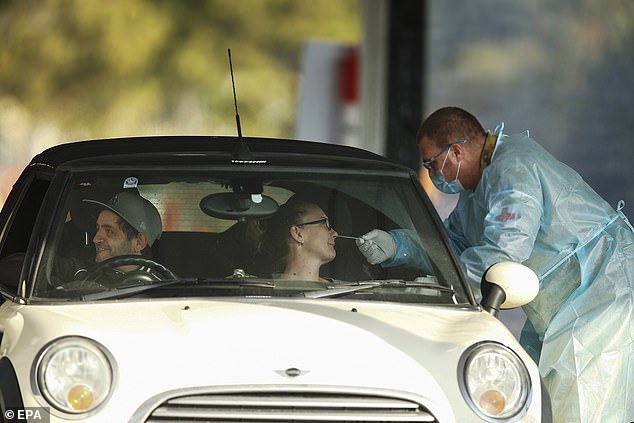 An Australian Defence Force member conducts a swab test a drive-through COVID-19 testing facility in Hoppers Crossing in south-west Melbourne on Friday. Researchers said an ‘unlucky, random’ event was likely the cause of Victoria’s second outbreak

The inquiry was ordered by Premier Daniel Andrews after it was revealed protocol breaches by security guards at two Melbourne hotels led to outbreaks.

Management of the hotel quarantine program is now being conducted by Corrections Victoria and police will also provide additional support, the premier confirmed on Sunday.

‘It just makes sense to take those extra steps … to try and make sure that you protect what is a particularly volatile environment from a virus point of view,’ Mr Andrews told reporters.