It’s Christmas time once again, yet Liverpool fans will be hard-pressed to ever receive a gift as good as the one which came into their lives in late 2017.

Ahead of the January 2018 window, Liverpool confirmed the news many had been expecting, and dearly hoping for – Virgil van Dijk would sign from Southampton, in what was to be a world record transfer for a defender at £75million.

A long and winding pursuit, which included a written letter of apology for alleged tapping up and a prolonged period of admiration from afar, finally concluded with the Dutchman arriving on Merseyside. As he closes in on his 100th appearance for the Reds, which will likely come against Wolves on Sunday, Sportsmail examines how things have changed since the moment the contract was inked.

Having already carved a huge Premier League reputation for himself in a struggling Southampton side, Van Dijk was coveted by the world’s best.

After being sold by a vision pitched to him by Jurgen Klopp, he appeared determined to be the answer to one of the most leaky defences in the top flight.

Liverpool’s relentless playing style and mercurial attacking sequences had already earned admirers at home and afar, but it was in the decisive moments that heads could not be kept and goals would be gifted.

Klopp’s early-forming Reds were simply too attacking for their own good, and developed a worrying habit at the beginning of his reign of out-scoring to win. 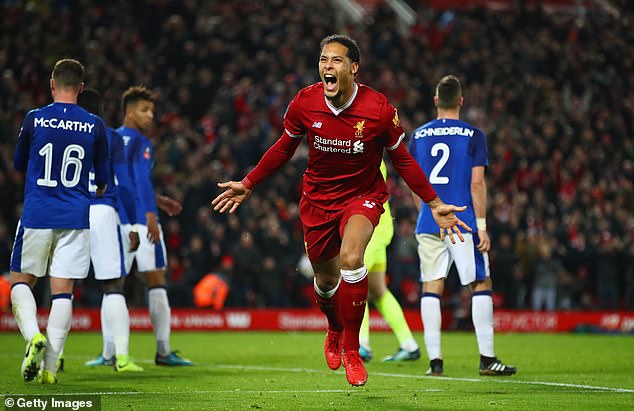 The Dutchman had the perfect start to Liverpool life, scoring on his debut vs rivals Everton

Van Dijk arrived at the perfect time, when the Reds needed balance across all quarters of the field. His debut, which just so happened to fall in the most romantic circumstance of a Merseyside derby, could not have panned out better if written as a script.

Rising in the 84th minute, Van Dijk loomed large at the Kop end before rattling a powerful header past Jordan Pickford and setting an early tone of majesty for his Liverpool reign. From day one the Dutchman ensured he was adored.

Van Dijk went on to slot in seamlessly alongside Dejan Lovren, strengthening the defensive line and barking orders from the off. It was quickly apparent that Van Dijk wasn’t the slightest bit fazed by his record price-tag, and had immediately plugged a gap. The extent of that plugging, however, was soon to be revealed.

The turnaround in Liverpool’s defensive fortunes was meteoric. For a club which delights in statistics, the figures Van Dijk began to post were remarkable.

In the second part of the 2017-18 season, Liverpool’s defensive line surged from one of the Premier League’s most concerning to the most water-tight. 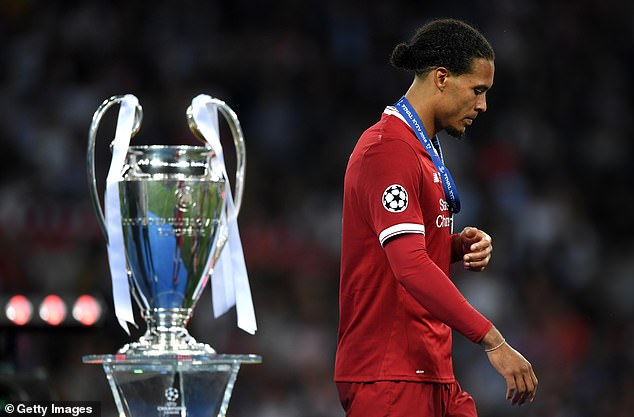 Van Dijk propelled Liverpool to the 2018 Champions League final, and learned from heartache

Van Dijk clocked in with a tackle success rate of just under 60 per cent for the remainder of the season, getting 1,980 minutes of game time under his belt with his new club as Liverpool progressed to a Champions League final.

After taking his time to get to the top of European football, Van Dijk, at the age of 28, then slipped in to almost trance-like levels of consistency.

The heartache from Kiev after defeat by Real Madrid seemed to drive Van Dijk on, with Liverpool and the wider Premier League seeing the fruits of this throughout the 2018-19 campaign that was to follow.

The much lauded stat of Van Dijk never once being dribbled past throughout the entire campaign was both marveled at by Liverpool fans and sniped at by rivals. But it was, unarguably, a fact, which set a new record along the way. 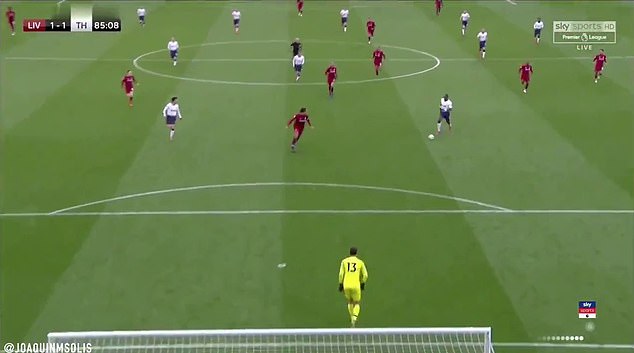 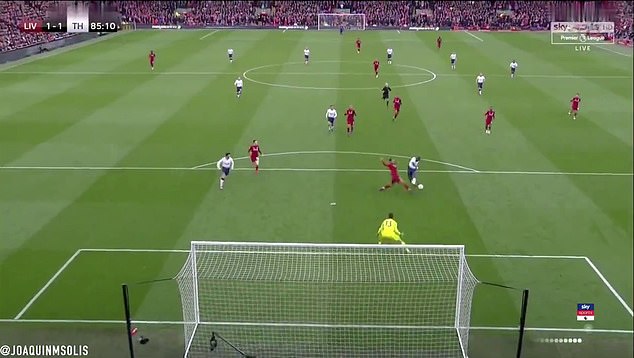 Van Dijk positioned himself between Moussa Sissoko and Son (L), before making a tackle

Van Dijk’s tackle success rate peaked at over 70 per cent, while putting in a huge 25 blocks throughout the season in which Liverpool very nearly pipped rivals Manchester City to the league title.

The Dutchman built up a huge margin on clearances, showing himself to be the most dominant defender in the entirety of the top flight for getting the ball away from danger. Of his 288 clearances, only Tottenham’s Toby Alderweireld came close with 239.

Consistency from the former Celtic and Southampton man soon became a period of sheer dominance.

Van Dijk quickly showed why Klopp and Liverpool were not willing to compromise and take a second option, should his transfer not have been possible.

Immediately compared to Liverpool legends such as Ron Yeats and Alan Hansen, Van Dijk wasted little time in proving he was so much more than a run-of-the-mill defender. 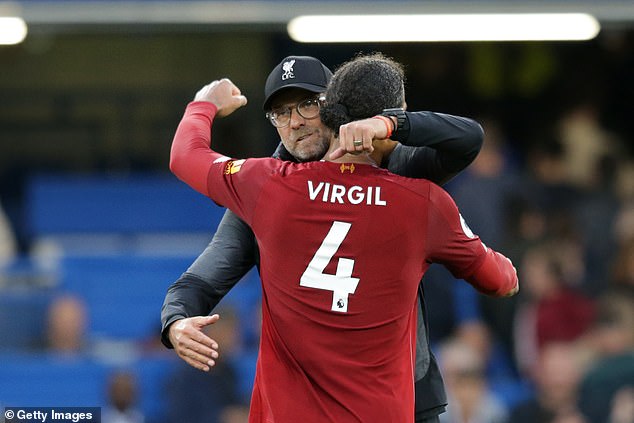 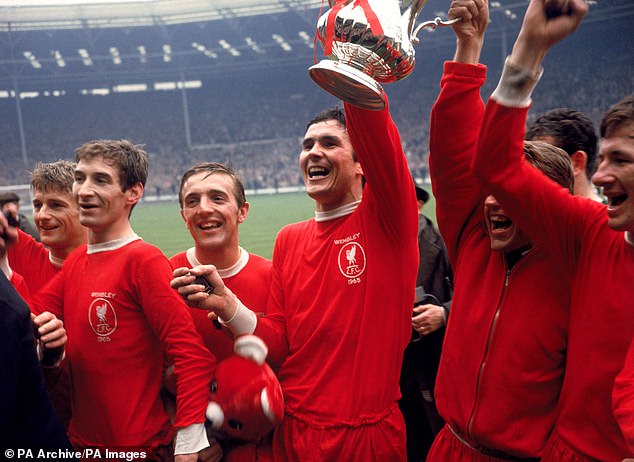 In September, former City captain Vincent Kompany named Van Dijk as the best ever Premier League defender. It seemed a huge claim, yet the logic falls into place.

Unlike the icons of yesteryear, such as Rio Ferdinand, Nemanja Vidic, Tony Adams, Jaap Stam, John Terry or Kompany himself – Van Dijk possesses a skill set which suggests a complete and total lack of weakness.

The strings to Van Dijk’s bow appear to be endless. From tackling to game reading, passing to aerial ability, the Dutchman is head and shoulders above his nearest rivals.

With Van Dijk, Liverpool have not only crafted one of the best defences in the country, but are also able to adapt their play purely around the versatile talents of the £75m man. 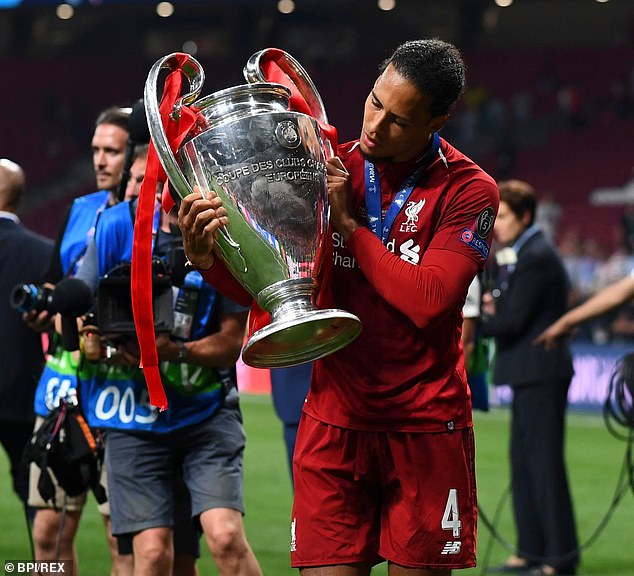 For all their slick forward play and calculated pressing attacks, Liverpool have shown an ability to generate opportunity direct from Van Dijk himself.

No better example can be seen than in last season’s Champions League knock-out stage against Bayern Munich, during which Van Dijk played a stunning 70-yard aerial ball down-field to a waiting Sadio Mane.

The pressure was high, with Liverpool in a hostile Allianz Arena with a finely poised 0-0 scoreline, but Van Dijk delivered. He would later go on to score in the same game, as the Bavarians were slaughtered on their own doorstep.

Entering a league of his own, it was no surprise to see Van Dijk touted as a potential Ballon d’Or winner.

After guiding Liverpool to European glory against Tottenham in Madrid, the irrepressible No 4 took Holland to the UEFA Nations League final.

Since August 2018, top flight defenders have been unable to get anywhere near Van Dijk’s figures, with a period of unrivalled dominance opening up in the central defensive position. 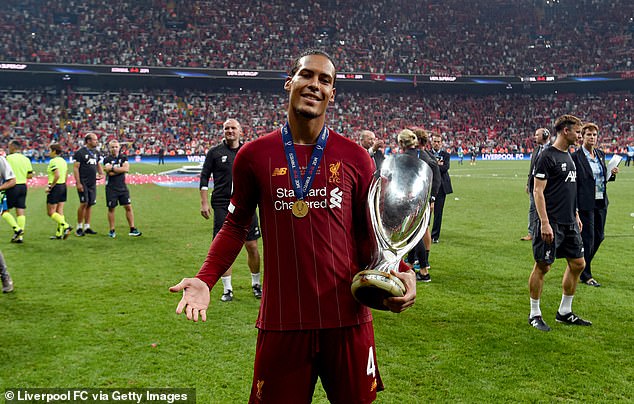 The UEFA Super Cup was added to the haul, with Liverpool hoping to soon end their title wait

In that time period, Van Dijk has seven goals to his name, two assists and a hugely impressive passing accuracy of 89.06 per cent.

In the air, Van Dijk becomes all the more impressive, if that is possible. The Liverpool rock has entered 364 aerial battles, almost 100 more than Maguire, and just shy of 200 more than Alderweireld, and won a total of 274 of those.

But for the genius of Lionel Messi, Van Dijk was set to become the first defender since Fabio Cannavaro in 2006 to win the Ballon d’Or and be crowned the best player on the planet. 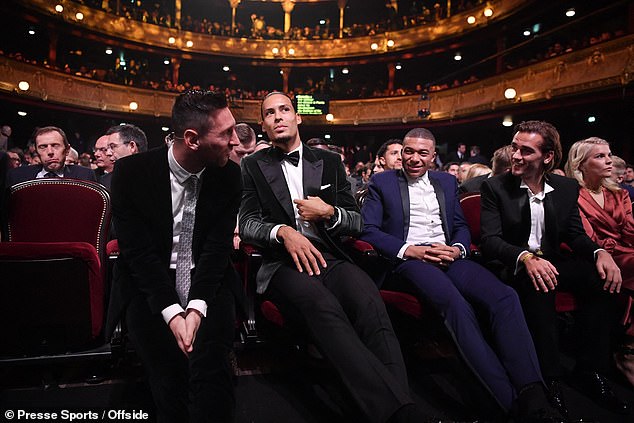 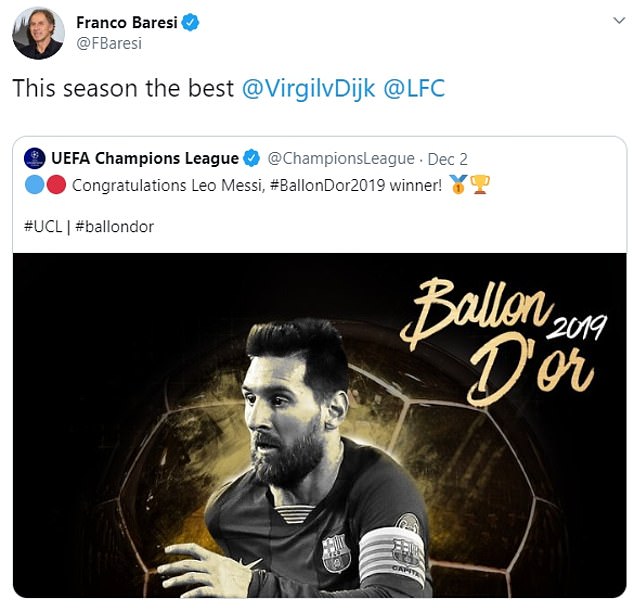 In the aftermath of the glitzy Paris ceremony, none other than Franco Baresi – widely considered one of the greatest defenders the game has ever produced – claimed nobody, not even Messi, bettered Van Dijk’s heroics over the previous 12 months.

As game number 100 comes around for Van Dijk in the red of Liverpool, the Kop will take great pleasure in noting that his Anfield legacy is only just beginning.

With the Premier League title and a Champions League defence still to play for, Van Dijk could yet ascend to a level many believed not possible.

Whether he will be the defining defender of the generation will be left to furious debate but one thing is for certain; Liverpool turned a corner the moment Van Dijk signed on the dotted line, and they haven’t looked back since.