How you can profit from the lockdown merger mania

Finding love in a time of lockdowns may be tricky, but in the corporate world the dating scene is very lively.

Between June and September, there were $456billion (£346billion) worth of $5billion-plus (£3.8billion) global deals, says analytics group Refinitiv, as companies embraced the urge to merge.

The questions for private investors are: What’s fuelling this mania? And how can I benefit?

Between June and September, there were $456bn (£346bn) worth of $5bn-plus (£3.8bn) global deals, says analytics group Refinitiv, as companies embraced the urge to merge

You would have to have been living under a stone not to have noticed the merger merry-go-round.

Among those finding new partners are debt-laden Premier Oil, whose price has sunk this year from 120p to 16p.

It has agreed a merger with its larger North Sea oil rival Chrysaor. Sadly, this alliance almost wipes out current shareholders.

In the world of luxury goods, the romance between LVMH, the French conglomerate and the famous American jeweller Tiffany has soured.

Swetha Ramachandran, manager of the GAM luxury brand fund believes that Bernard Arnault, the wily boss of LVMH, will still win Tiffany, although for less. In the meantime, Arnault is rumoured to be eyeing Richemont, owner of the Cartier group.

Mulberry, the AIM-listed upmarket bag maker, is rumoured to be a desirable bauble for a larger enterprise. Its shares are down more than 50 per cent since February when Mike Ashley’s Frasers Group took a stake.

Some investors may now be pondering the choice of a £1,000 Mulberry bag – or 600 Mulberry shares.

Security group G4S is the target of a hostile bid by Garda World of Canada and interest from Allied Universal Security Services of America, William Hill has caught the eye of US casinos group Caesars and Toscafund has made an offer for mobile phone operator Talktalk. The list goes on.

Why has there been such a spurt of bids and deals? One reason is that the pandemic and underlying Brexit worries have destabilised many companies, leaving them vulnerable. Private equity groups have been longing for such opportunities and have plenty of cash.

TDR Capital, one private equity group, is funding the £6.8billion purchase of Asda by the Issa brothers, while another, Bain Capital, is set to acquire LV, the mutual life insurer, whose 1m members will get a payout.

And the FTSE 100 index is about 20 per cent down this year so there are bargains to be had. Retailers that have been slow to adapt to the shift to online may interest the private equity players. 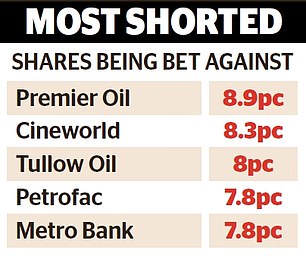 The media sector may also be a happy hunting ground. There is bid talk again about former Footsie member ITV.

Its shares are 76p, against 248p five years ago, reflecting the damage coronavirus has done to its advertising revenue and production arm.

US media giant Liberty Global, with a 9.9 per cent stake, is a possible buyer.

Plenty of other businesses could be bid targets. Small investors can profit if they hold shares in a company that is taken over, or if they buy into one that becomes a target.

Rather than trying to pick shares in the sights of the bidders, you could buy into a fund that invests in UK shares.

Some might be taken over and boost the value of your holding, and of course the companies in the fund might improve anyway, without a bidder.

Two current battles illustrate the appeal of UK companies which have been down on their luck. Garda World last week made a 190p-a-share hostile bid for G4S, and Allied Universal joined the fray yesterday.

Private equity-backed Garda may need to pay more since shares in G4S have risen to 212p, and leading shareholders feel its offer undervalues G4S.

In a contested bid, you have to decide whether the company has better prospects as an independent, or whether to take the money and run, though the fate of the target is usually decided by large institutional investors rather than small private shareholders.

Are bids good for investors? Well, bidders normally have to offer a premium to the undisturbed share price, but it can be hard to tell whether that is genuinely good value in the long run.

If a bid is agreed, the directors who recommend it ought to be convinced it is in the best interests of investors, but there is no guarantee they are right – and they may have personal incentives such as share options.

In a hostile bid, shareholders have to weigh up all arguments. Would you be better off with cash in hand, versus the long-term value the company might achieve as an independent? And if the offer is for shares in the predator, you need a view on its prospects.

Takeovers create great theatre, but making money from them is not as easy as it may look – unless of course you are one of the bankers, lawyers, and PR advisers who invariably cash in handsomely.

Online fashion retailer Asos is set to report its full-year results on Wednesday.

The AIM-listed firm has benefited from shoppers flocking to the internet during the lockdown, which also handily led to fewer returns.

Revenues surged between 17 per cent and 19 per cent higher to about £3.2billion in the 12 months to August 31, a trading update two months ago revealed.

As a result, the firm is expecting annual profits of between £130million and £150million, up from £33million last year.

The cheery news has caused Asos shares to rally more than 400 per cent higher since their lows in March, when the stock market was roiled by coronavirus concerns.

But investors will now be looking for further assurance that the bonanza is continuing and that Asos’ profit margins are still healthy, after shrinking in the first half.

They may have been hit by restrictions on international air travel, which have driven up the costs of transporting freight and squeezed availability in container shipping.

Investors are also likely to want guidance from chief executive Nick Beighton for the current fiscal year – analysts predict Asos could grow sales by 17 per cent again to £3.8billion.