The controversial jabs do not raise the risk of 45 serious, chronic diseases, a study found.

Although results revealed the jabs are associated with coeliac disease, the researchers believe this is likely due to undiagnosed cases being picked up by health professionals at the time of vaccine administration.

HPV vaccines are offered as a series of two jabs to girls aged 12 to 13 in the UK to protect against the sexually-transmitted virus that causes cervical cancer.

Last year, the parents of Ruby Shallom, 16, from Bracknell, Berkshire, claimed she was left paralysed in three limbs and in hospital on a drip after having an HPV vaccine.

In May, 13-year-old Zara Beattie, from Wigton, spoke out about her agony after being left wheelchair-bound and feeling like an ’80-year-old’, which her parents also put down to having the jabs.

Yet, global health officials have repeatedly denied the vaccines have any detrimental effects.

Controversial HPV vaccines do not raise the risk of 45 serious, chronic diseases (stock) 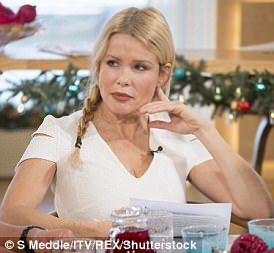 Melinda Messenger was accused of scare-mongering after revealing she would not be giving her teenage daughter the HPV vaccines.

The TV personality revealed her strong views on This Morning last year and was criticised by the show’s resident doctor Dr Christ Steele.

Melinda expressed her concern over her daughter, Evie, 13, having the jabs following a link between the vaccines and a range of chronic illnesses.

Viewers branded her decision ‘irresponsible’ and Melinda said hosts Holly Willoughby and Phillip Schofield were overly hostile towards her, both on and off stage.

It is believed there was an attempt by the UK Public Health Association to ban her from even appearing on the programme.

Researchers from the Statens Serum Institut in Denmark analysed 3,126,790 women aged between 18 and 44.

Some eight per cent of the study’s participants were vaccinated with at least one HPV dose.

The researchers compared the incidence of 45 serious, chronic diseases between vaccinated and unvaccinated females.

Although the majority of vaccinations are carried out on those aged between nine and 12 years old, adults were included in the study as a substantial number of women are choosing to receiving the jabs.

HPV vaccines have no safety concerns

Results reveal HPV vaccinations have no serious safety concerns and do not cause disease.

Only coeliac disease was significantly associated with HPV vaccination.

The researchers believe coeliac disease sufferers may only be made aware of their condition during vaccination visits as the disorder is poorly diagnosed in Scandinavia.

Lead author Dr Anders Hviid said: ‘This is the most comprehensive study of HPV vaccination safety in adult women to date.

‘It is not unreasonable to expect different safety concerns in adult women compared with young girls and our study is an important supplement to the safety studies in young girls.’

The findings were published in the Journal of Internal Medicine.

THE 16-YEAR-OLD GIRL LEFT PARALYSED BY THE HPV VACCINE 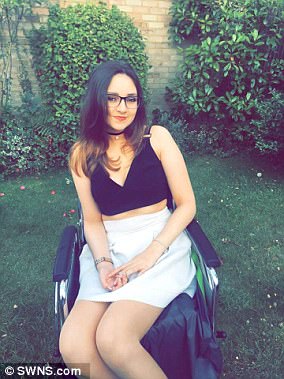 A 16-year-old girl was left paralysed in three limbs and in hospital on a drip after having the controversial HPV jab, MailOnline reported last December.

Back in 2014, Ruby Shallom was vaccinated at school to protect her against cervical cancer as part of the routine NHS programme.

Her muscles gradually became weaker and in May 2016, two years after she was given the jab, she woke up with no feeling in her legs whatsoever.

Ruby has since lost all sensation in both her legs and one of her arms, and is virtually bedbound, unable to eat, lift or dress herself.

She also suffers from incontinence and is often too weak to lift her head.

Doctors have been unable to diagnose her and have dismissed Ruby’s symptoms as psychological.

They also refuse to acknowledge any link to the jab.

In recent years, numerous teenage girls have made headlines after claiming to have suffered devastating side effects after having HPV vaccines, with alleged complications including paralysis and Chronic Fatigue Syndrome.

Yet, global health officials have always strongly denied the jabs have any nervous system effects.

As with any vaccine, there is a very small chance of a severe allergic reaction with the HPV jab, according to the Vaccine Knowledge Project at the University of Oxford.

Up to February 2017, 11,867 reactions to Gardasil, the jabs’ brand name, have been recorded, according to The European Medicines Agency.

Of these reactions, many report symptoms of chronic fatigue syndrome. Cases of girls being left paralysed are rare.

The World Health Organisation, the US Center for Disease Control and the European Medicines Regulator have ‘extensively reviewed the vaccine’s safety’.

They conclude there is ‘no credible evidence of a link between the HPV vaccine and a range of chronic illnesses’.

In addition, researchers from the Norwegian Institute of Public Health discovered unvaccinated girls face the same risk of developing chronic fatigue syndrome as those receiving the jabs.