Hormone replacement therapy (HRT) will soon be available over the counter in the UK for the first time.

The move could open a form of HRT treatment to many more menopausal women.

Women currently need a prescription from their GP to access HRT at a time when many are struggling to get an appointment with their family doctor.

Britain’s medications watchdog today approved the sale of vaginal estradiol tablets, that can help alleviate vaginal dryness, soreness, itching, and uncomfortable sex caused by a lack of the hormone oestrogen, to people without a prescription.

The HRT, sold under the name Gina 10, comes in a tablet that is inserted into the vagina and will be available for purchase from pharmacists from September for women over 50 who have not had a period for at least a year.

However, it won’t cure other menopause symptoms like hot flushes or difficulty sleeping.

The approval of the low-dose vaginal HRT came after a public consultation and safety review earlier this year.

It can alleviate dryness, soreness, itching, burning and uncomfortable sex in women over 50 who have not had period for at least a year.

The drug slowly releases estradiol, the type of oestrogen mainly produced by the ovaries, directly into the vaginal tissue.

This replaces the oestrogen that women’s bodies produce in this area prior to going through menopause.

How do you take it?

In the initial course of treatment women insert one tablet into their vagina daily for a fortnight.

They then transition to a maintenance course of one tablet twice a week.

Does it have any side effects?

The most common side effects reported are abdominal pain, vaginal discharge, vaginal discomfort and vaginal bleeding.

Cases of vaginal bleeding in particular need to be seen by a GP to rule out anything more serious.

Serious side effects are from taking the medication are considered rare.

Is there an increased risk of breast cancer from using Gina?

No. Some forms of HRT that release female sex hormones into the bloodstream, like skin patches and gels, have been linked to a small increased risk of breast cancer.

As the vaginal tablets only release hormones directly into the surrounding tissue very little enters the bloodstream so they are not considered to increase the risk of breast cancer.

It comes as tens of thousands of women in the UK struggle to get hold of HRT medication due to ongoing supply shortages.

Menopause occurs when a woman stops having periods, meaning she is no longer able to get pregnant naturally.

The process — which is triggered by the ovaries producing less oestrogen — is a natural part of ageing and usually occurs between the ages of 45 and 55.

HRT is one way of treating the symptoms. It restores the levels of female hormones, bringing relief to hundreds of thousands of women each year.

‘Women will be able to safely obtain a local vaginal HRT product without a prescription, which increases women’s access to treatment and gives them greater control over their choices while relieving pressure on frontline GP services,’ she said.

She also thanked all those who participated in a public consultation in February to make Gina 10 available over the counter, adding the MHRA was committed to further improving women’s access to HRT medications.

‘We will continue to improve women’s access to medicines for menopausal care when it is safe to do so, and to place their views at the centre of our regulatory decisions,’ she said.

Comments that the move ‘relieving pressure on frontline GP services’ comes as earlier this month MailOnline revealed that just a quarter of GP appointments in England are face-to-face and with an actual doctor.

NHS Digital told this website that of the 27.5million GP appointments carried out across England in May, just 27 per cent were both in-person and with a qualified doctor.

It comes amid a shortage of GPs in England with some areas having just one family doctor for every 2,500 people.

GPs have said ‘the number of patients per GP is rising to unsafe and unmanageable levels’ and blamed the differences on staff shortages and increased demand post-pandemic. 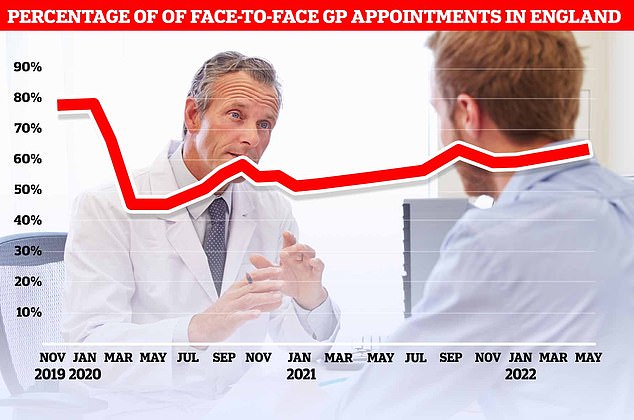 NHS Digital data shows 64 per cent of total GP appointments were face-to-face in May. The figure is the second-highest since the height of the first Covid wave forced the majority of appointments to be held virtually. But it is still well below pre-pandemic levels, when eight in 10 appointments took place in-person.

All you need to know about the menopause

Menopause is when a woman stops having periods naturally and is no longer able to get pregnant naturally.

It is a normal part of ageing and usually happens between the ages of 45 and 55 when a woman’s levels of the sex hormone oestrogen drop.

Women are advised to see their GP if their symptoms are difficult to manage.

Treatments doctors can provide include hormone replacement therapy, such as tablets, skin patches and gels that replace oestrogen.

Minister for Health, Maria Caulfield, also welcomed the news of over the counter HRT, adding the Government was working to improve general HRT supply to address the recent shortage.

‘Making Gina available over the counter is a huge step forward in enabling women to access HRT as easily as possible, ensuring they can continue living their life as they navigate the menopause,’ she said,

‘We’re continuing to work with suppliers and manufacturers to secure sustainable short-term and long-term access to HRT and our UK-wide menopause taskforce will tackle taboos and issues surrounding menopause.’

Vaginal oestrogen HRT differs from other forms of treatment like oral tablets, skin patches or gels that release female hormones into the blood stream.

Local HRT like the Gina vaginal tablets release estradiol, the type of oestrogen mainly produced by the ovaries, directly into the vaginal tissue meaning very little is absorbed into the bloodstream.

This form of HRT is considered to not increase risk of breast cancer by the NHS whereas other forms, that combine oestrogen and progesterone, are linked to a small rise in risk.

The MHRA said as the Gina tablets will be available over the counter this meant pharmacists can provide advice on if the mediation is safe for women to use.

Doctors have for decades avoided recommending HRT to women who have beaten the disease over fears it would trigger a recurrence.

The discovery gives hope to thousands who have survived breast cancer only to be plagued by crippling symptoms of the menopause. Many have been left to struggle through using natural remedies or nothing at all, campaigners say.