HSBC has shaken up its team of top executives as the banking giant doubles down on China.

The lender announced that it will now have two chief executives focused on its key Asia Pacific region – veteran bankers David Liao, who is likely to zone in on HSBC’s profit engine of Hong Kong and China, and Surendra Rosha, who will oversee the rest of the area.

They will replace Peter Wong, 69, who prompted a backlash from British and US politicians last year when he signed a petition backing China’s draconian national security law in Hong Kong.

Protesters stage a demonstration outside an HSC branch in Hong Kongin 2019. The London-headquartered lender now makes the vast majority of its profits in Asia

The move was seen as a sign of HSBC’s support for Beijing, and an abandonment of the former British territory’s pro-democracy protesters who were threatened with imprisonment for speaking out.

But Wong, a member of a political advisory body to China’s Communist party, will stay on as chairman of HSBC Asia Pacific – and will serve as an adviser to the bank’s group chairman Mark Tucker and chief executive Noel Quinn.

The promotion of Liao and Rosha, both of whom have been with the lender, which has its headquarters in London, for more than 20 years, show how much effort HSBC is putting into its Asia expansion. 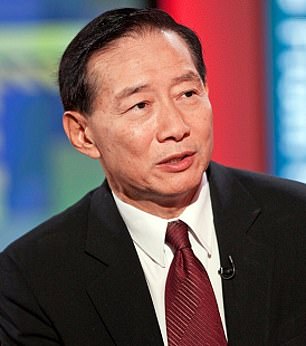 In firing line: Peterr Wong has overseen a period of protest at HSBC

John Cronin, a banking analyst at Goodbody, said the appointment of two bosses for Asia Pacific was not a surprising move ‘as the bank seeks to forge closer ties with China’.

It already makes most of its profits in Asia, at £9.1billion compared to losses of £3billion in Europe last year, though most of this comes from Hong Kong, where HSBC was established by a Scottish trader in 1865.

China has a rapidly growing middle class, who are looking for wealth management advice and other banking services.

HSBC has more than 150 outlets in the country, employing more than 7,000 staff – the largest network of any foreign bank in mainland China. Despite being the epicentre of the pandemic, China was the first country to regain its pre-Covid levels of economic output.

Figures released yesterday showed its imports ballooned at their fastest pace for a decade in May, as manufacturing picked up further. HSBC is hoping to take a slice of this expanding economy, and Liao and Rosha bring a wealth of experience with them.

But by zoning in on China, HSBC is treading a fine line between East and West.

The bank has already drawn sharp criticism from US politicians for ‘kowtowing’ to Beijing. Last year, then US Secretary of State Mike Pompeo blasted the bank for its ‘show of fealty’ in the face of ‘coercive bullying tactics’.

British MPs have been equally unimpressed – the Foreign Affairs Committee accused HSBC of ‘aiding and abetting one of the biggest crackdowns on democracy in the world’.

Quinn has insisted that the lender must follow the rules of the countries it operates in – even the controversial laws imposed on Hong Kong by China.

Yesterday, he said: ‘I am very excited to have David and Rosha. Their collective experience of our markets across Asia Pacific, together with their combined knowledge of the bank and our customers mean they are ideally placed to grow the business.

‘We are investing $6billion (£4.2billion) in Asia in the next five years and David and Rosha will lead this next phase of our Asia strategy.’