The Hubble Space Telescope has confirmed that Jupiter’s ice moon Europa — the subject of intense speculation that it could harbor alien life — has persistent water vapor.

Strangely enough, however, it’s only on one hemisphere.

The water vapor is on the trailing hemisphere, the portion of the moon that is always opposite its direction of motion on its orbit, according to a statement from the European Space Agency.

At present, researchers do not yet understand why the water vapor is only on the trailing hemisphere and not the leading hemisphere. 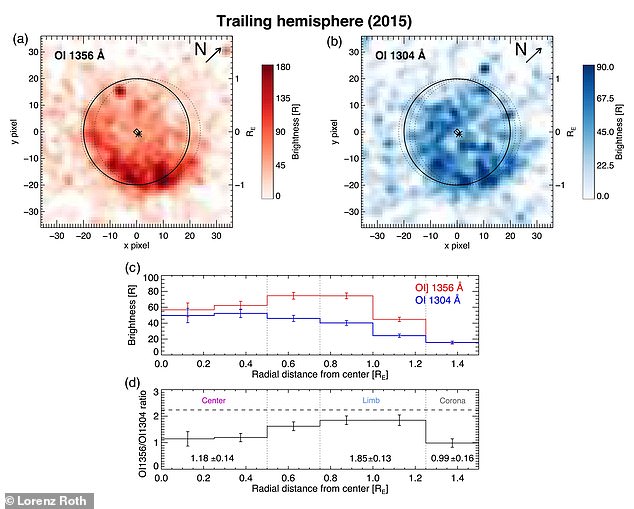 The vapor is on the trailing hemisphere, the part that is always opposite its direction of motion on its orbit. Researchers do not yet understand why the water vapor is only one hemisphere

The study used Hubble archival images and spectra and a technique that determined that there is water vapor in the atmosphere of Jupiter’s moon Ganymede, to come up with their findings.

The presence of water vapor on Europa, Jupiter’s fourth largest moon, has been established as far back as 2013, when the Hubble photographed plumes erupting more than 60 miles high through its icy shell.

However, this new finding notes that there are water vapors over a significantly larger portion of the moon than first thought, with the data spanning between 1999 and 2015.

‘The observation of water vapor on Ganymede, and on the trailing side of Europa, advances our understanding of the atmospheres of icy moons,’ said the study’s sole author, Lorenz Roth of the KTH Royal Institute of Technology, Space and Plasma Physics, in a statement.

‘However, the detection of a stable water abundance on Europa is a bit more surprising than on Ganymede because Europa’s surface temperatures are lower than Ganymede’s.’

In May, a separate study found that the ice shell could actually have pockets of water that could support life.

Two months later, scientists suggested that robots may have to dig through as much as one foot of ice to find signs of life in the ocean.

Europa is slightly smaller than Earth’s moon and it orbits Jupiter every 3.5 days.

It is thought to have an iron core, a rocky mantle and the aforementioned ocean made of salty water, like Earth. 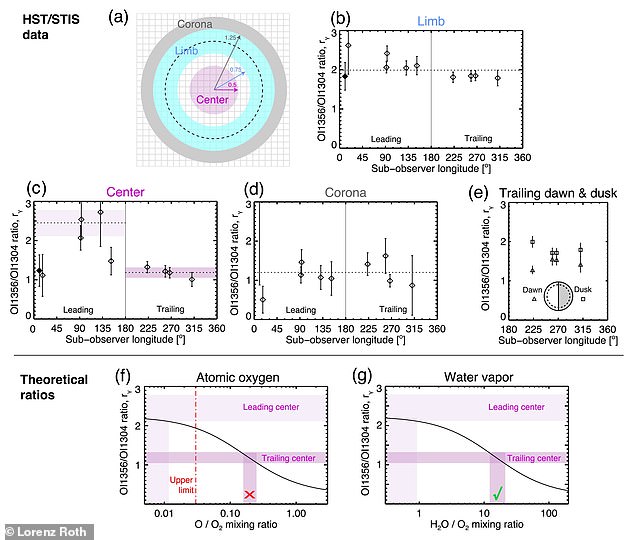 The presence of water vapor on Europa was established in 2013. Europa has a liquid ocean made of water that could be hospitable for life

The Hubble is a joint project between NASA, the ESA and the Canadian Space Agency, CSA.

The far side of the moon ‘glows in the dark’ due to being hit with relentless radiation.

Europa reflects more sunlight than Ganymede and thus, has a surface temperature that’s 60°F cooler than it is on Ganymede.

The daytime higher on Europa is -260°F, but even with this temperature, the findings suggest water ice is transforming from solid to vapor, just as it does on Ganymede.

Scientists know that Europa has a liquid ocean made of water that could be hospitable for humans or perhaps extraterrestrials.

In 2020, a British space scientist said it is ‘almost a racing certain’ that Europa is home to alien life, going so gar as to suggest they are ‘octopus’ like creatures.

Separately that year, scientists found that Europa’s ocean ‘contains all the ingredients for life.’

In discovering that the water vapor is only on part of the moon, it could help future space missions to study the Jupiter satellite.

The study has been published in the journal Geophysical Research Letters.

The findings are of interest to both NASA the ESA, which will send missions to this region of the solar system, the 2024 Europa Clipper mission and Jupiter Icy Moons Explorer (JUICE) mission, respectively.

The Europa Clipper mission could answer whether the icy celestial body is habitable for humans and capable of supporting life.

In addition, it will look for potential areas on the moon, the sixth-largest in the solar system, for a lander to touchdown.

The spacecraft will arrive at the moon in 2030 and use radar to look beneath the surface and an analyzer to study dust coming from the world in plumes.