In what was another dramatic briefing room moment, White House Press Secretary Sarah Huckabee Sanders got in a spat with CNN’s Jim Acosta over whether the Trump administration is a ‘champion of the free press.’

The tussle began when another reporter had asked the press secretary about a new ‘Reporters without Borders’ report that said the president’s ‘fake news’ attacks on the press have denigrated press freedom in the United States.

‘I certainly would reject the idea that the president or this administration has halted freedom of the press,’ Huckabee Sanders answered, adding that she believed the administration has been one of the most accessible in decades.

White House Press Secretary Sarah Huckabee Sanders got into it at Wednesday’s press conference with CNN’s Jim Acosta over the topics of press freedom and whether Dr. Ronny Jackson is up to take over the top Veterans Administration job 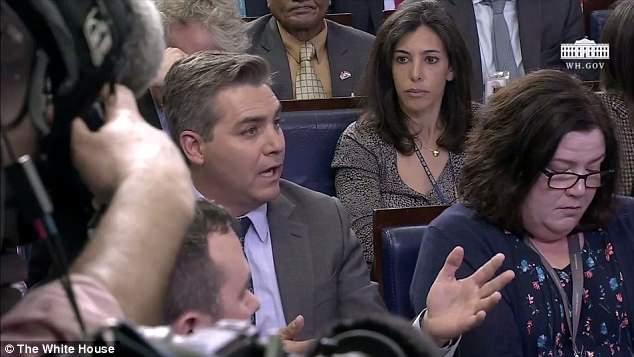 CNN’s Jim Acosta had asked the press secretary if she believed the Trump administration is a ‘champion of the free press,’ as she suggested his tone to her is sometimes ‘completely unnecessary’

The topic came up again when it was Acosta’s turn at bat.

The CNN newsman had first asked a question about the controversy of the day: the nomination of Dr. Ronny Jackson for secretary of Veterans Affairs.

‘Yesterday, the president suggested that Dr. Jackson does not have the experience to run the Department of Veterans Affairs, is that a fair assessment?’ Acosta asked.

During his joint press conference with French President Emmanuel Macron, Trump had said he realized that Jackson had ‘an experience problem, because of lack of experience.’

‘So nobody has the experience,’ Trump said. 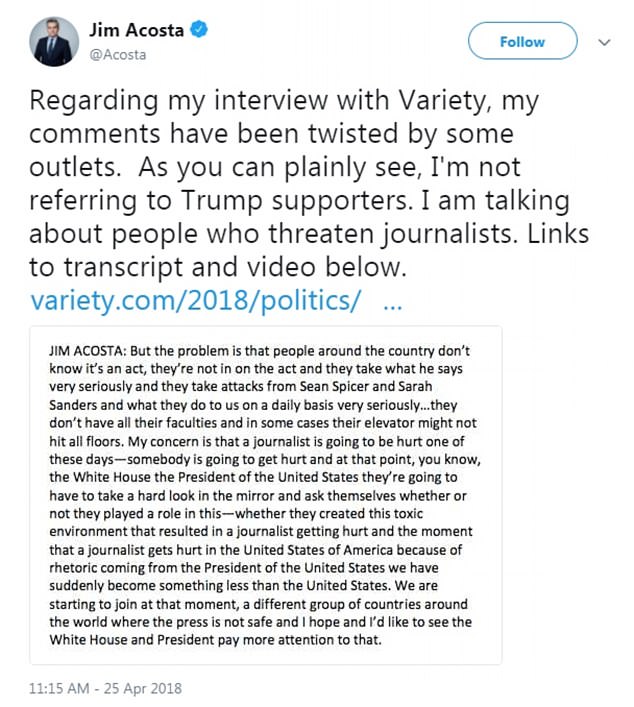 During Jim Acosta’s back and forth with Press Secretary Sarah Huckabee Sanders she referenced this tweet, in which the CNN reporter says he believes his words were taken out of context 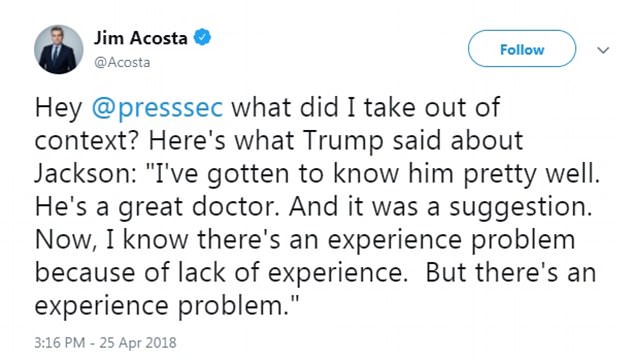 CNN’s Jim Acosta later tweeted a quote by President Trump and asked the press secretary to explain how he had taken what the president said out of context. In Trump’s remarks he had later explained that nobody would be fully qualified for the job because the VA is so big

Huckabee Sanders told Acosta that she thought he was taking some of the president’s words out of context.

‘Based on your tweet today I know you don’t appreciate when people take your words out of context,’ she said, referencing a tweet Acosta sent out about comments he made to Variety, which were interpreted by some as an insult to Trump voters.

Acosta, pointing to some of Trump’s anti-media rhetoric, was worried that the president may encourage people who ‘don’t have all their faculties and in some cases their elevator might not hit all floors’ to harm journalists in the future.

Back at the briefing, Huckabee Sanders told Acosta that she’s appreciate he not take the president’s words out of context.

Acosta then segued over to press freedom.

‘Since she brought up being taken out of context, it seems to be a press related question, are you trying to say that this administration is a champion of a free press?’ he asked.

Huckabee Sanders said that the administration supported a ‘free press.’

‘But we also support a fair press,’ she added. ‘And I think that those things should go hand and hand. And there’s a certain responsibility by the press to report accurate information.’

Acosta interrupted and asked if that wasn’t also a responsibility of the president.

‘I’m not finished,’ she barked. ‘I think a number of people in this room do that every single day, they do their very best to provide fair and accurate information.’

The press secretary said she certainly supported that and that was one of the reasons she held briefings, which take place several times a week.

‘And a lot of times taking your questions in a tone that is completely unnecessary, unneeded and frankly doesn’t help further the conversation or help the American people get anymore information in a better way, which is your job and my job, and that’s what I’m trying to do,’ she said, chiding the CNN reporter.

Acosta didn’t let her move on without a rebuttal.

‘The president’s tone toward the press obviously is not helpful at times and I think that is plain to see,’ he shot back.

Acosta later tweeted at the press secretary, pulling Trump’s quote about Jackson having an ‘experience problem.’

‘Hey @presssec what did I take out of context,’ he said, egging her on.