A brave breast cancer patient is keeping her mind off the deadly disease by doing carpool karaoke on the way to her radiotherapy appointments.

Mandy Taylor was in remission but her tumour returned this summer.

But now, to keep her spirits high, she is getting family, friends and even strangers to do a James Corden-style carpool karaoke with her on the way to her hospital treatments.

The 49-year-old, who lives in Golcar near Huddersfield, said she had a ‘meltdown’ on her first visit to hospital and needed a way to stay positive during treatment.

She told the Huddersfield Examiner: ‘I thought if I can’t even make it through the door, how am I going to make it to 15 appointments?

‘I came up with the idea of doing carpool karaoke with 15 different drivers in numerous forms of transport taking me to hospital – and on the way we wouldn’t talk about cancer.’

Ms Taylor was first diagnosed with cancer six years ago. She had stopped treatment after several rounds of remedial surgery, but was still having check-ups when a new tumour appeared in the exact same place as the original one.

Fortunately, it was removed within a month of it being detected. But she is still undergoing radiotherapy at St James Institute of Oncology in Leeds.

She said: ‘It felt like I had just gotten my life back on track. Finding another tumour made me stop for a minute and think, ‘Why me?’

‘We thought it was all behind me and thought we wouldn’t have to do this again. I say ‘we’ because my husband Andrew has been amazing and my family and friends so I’m not alone in this.

‘But cancer statistics are so high now, I’d rather it be me than someone else.

‘I’ve been there, done that, got the T-shirt and it will not defeat me. I wouldn’t wish it on anybody else.’

Ms Taylor’s fighting attitude has helped her find the energy to raise awareness of what it is like fighting cancer with various charities and fellow patients in the hospital waiting room.

She added: ‘I think my reaction was because it was a specialist facility dedicated to the treatment of cancer.

‘Before, my appointments were at general hospitals like Huddersfield Royal Infirmary and no one in the waiting rooms knew what I was there for, I was able to be anonymous.

Ms Taylor, 49, of Huddersfield, is pictured wearing a mask and devils horns as she performs Monster Mash on the way to cancer treatment in Leeds

‘When I was first diagnosed, I threw myself into charity work and barely had time to think about it.

‘I couldn’t pretend everything was normal anymore and the reality was stark and shocking for someone like me who was in denial.’

She has vowed to post a new video every weekday from October 20 to November 9, having already covered All Night Long by Lionel Richie with her mother Carol Hill and Don’t Stop Me Now by Queen.

Her car pool activities, inspired by Gavin and Stacey star and creator James Corden and The Late Late Show, she has ridden on the back of a stranger’s motorbike and is soon set to get a lift from a firefighter. 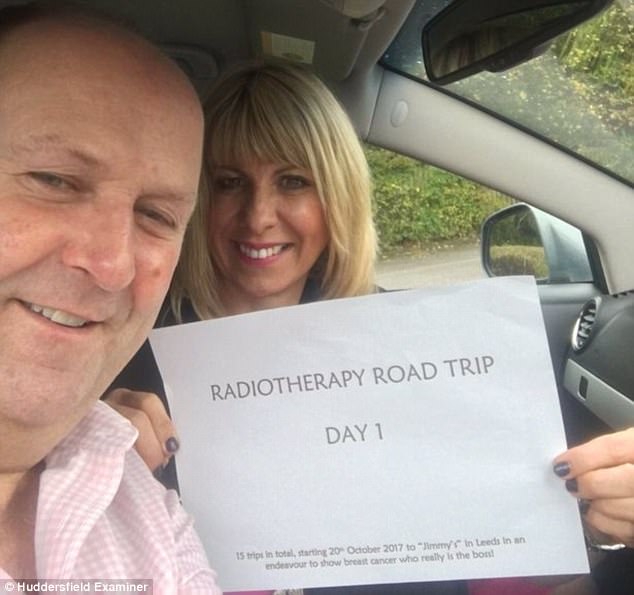 Ms Taylor, who works as personal assistant, volunteers for several charities in her spare time and previously worked for the Huddersfield Town Foundation.

But acknowledging that she is in a relatively better position than other patients, she said: ‘I don’t want to upset anybody.

‘Please don’t think I’m laughing in the face of cancer or at anybody who has lost their family or friends to cancer.

‘This is just my journey and my way of staying positive.’ 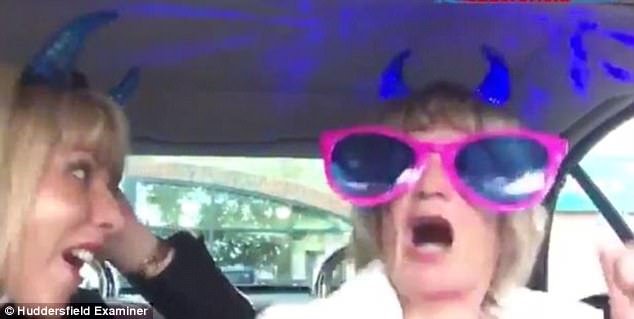