A huge mass of scaffolding has collapsed from the side of a four-storey building near the Royal Free Hospital in London this afternoon.

A witness at the scene said there was ‘an awful lot of screaming’ as the large structure collapsed on the busy London street – just yards from one of the capital’s main hospitals.

Emergency services are currently attending at the incident in Hampstead Heath.

Staff at the Royal Hospital were told not to go home because of the ‘major incident.’

Hilary Barnes told the Camden New Journal: ‘I was going up towards to Hampstead and we stopped outside M&S – thank god.

The scaffolding, located near the Royal Free Hospital, in London, has collapsed, and according to witnesses 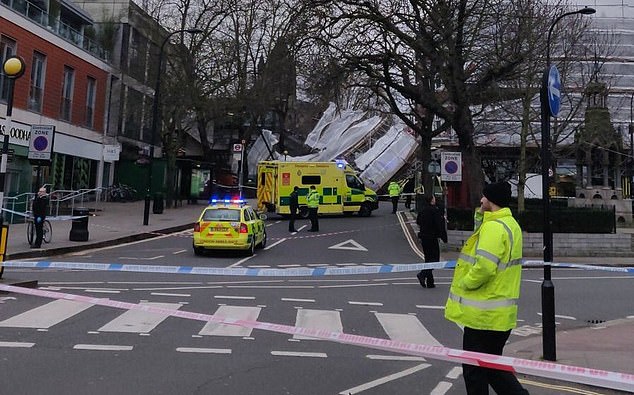 Emergency services are currently attending at the incident in Hampstead Heath

‘As we were waiting there this whole thing, it goes up the whole of the building, it started to very slowly go outward and then it buckled. It was extraordinary.

‘There was an awful lot of screaming. Ambulances were charging down there within seconds. It looked like the wind called the polythene and the scaffolding came away.

‘I am sure there will be casualties as it is so busy, with the schools and the Royal Free. There is no way any traffic is coming through there for a while.’

A police spokesman said no injuries have been reported.