Huge truck clips the back of a car sends it spinning

Dashcam footage has revealed the moment a driver had a lucky escape after a truck clipped his car and sent it vehicle spinning out of control across lanes of traffic.

Tim was driving on the Hume Highway just before the Liverpool and Camden Valley Way exit on Friday when his dash cam caught the moment a huge freighter bumped his car and didn’t stop.

The truck changes lanes as it draws closer to the car, finally hitting it and sending it spinning in circles across the width of the motorway, the video shows. 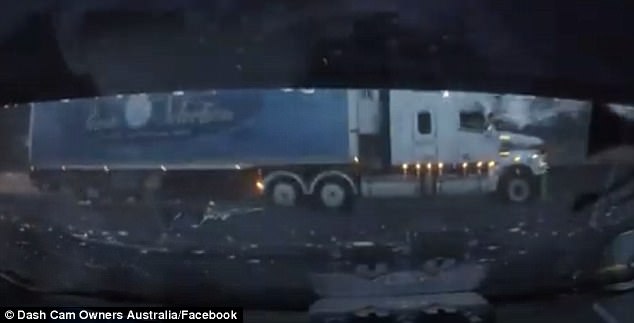 The car spins several times to the sound of car horns blaring and brakes screeching before it comes to a stop facing the oncoming traffic.

‘What the f*ck!’ the driver can be heard saying, as the truck keeps driving and other cars fly past.

Wickham Freightlines has come forward and identified the truck as one of their Tow Haulers, saying that a contractor from Nolan Meats was driving at the time.

‘Both Wickham Freightlines and Nolan Meats do not accept this behaviour and will take appropriate action,’ said a statement. ‘We will be investigating this incident fully.’

One side of the car has been crushed completely, but Tim was uninjured in the collision.

One side of Tim’s car has been completely crushed in the incident, but Tim himself was unhurt

Meanwhile, outraged viewers have taken to Facebook to argue about who was at fault.

‘Regardless of who’s fault this is, the truckie would be fully aware he had hit someone, and he should [have] stopped,’ commented Bunny Elliot below the video.

‘Yes trucks have blind spots but as a responsible driver if you hit someone or something you stop and take the consequences.’