An angry motorist has been banned from driving after deliberately break-checking a 62 tonne truck on a busy highway.

Gary Richard Robertson, 49, was given a six-month disqualification following his reckless behaviour at Barnawartha, in north-east Victoria, last September.

Robertson told police the truck driver, Stuart John Annison, had cut him off as he travelled down the Hume Highway, The Border Mail reported.

But the truck’s dashcam footage revealed that Robertson had break-checked the truck – with the vehicles coming within centimetres of each other.

Robertson can be seen overtaking the truck in a Ford Fairmont, carrying a passenger and a dog.

The car merges into the left lane before it brakes hard in front of the truck which pulls into the right hand lane to overtake the car.

Robertson then pulls his car into the middle of the road and blocks the truck, which merges back into the left lane.

Minutes later, Robertson attempts to overtake another heavy vehicle and pulls into the right hand lane, with the the truck driver behind him.

The heavy vehicle slowly edges closer to the car before its bumper comes centimetres away from the Ford.

Neither of the drivers manages to overtake the heavy vehicle driving in the left lane.

They both pull back before the driver of the Ford throws his arm out the window to make a rude gesture. 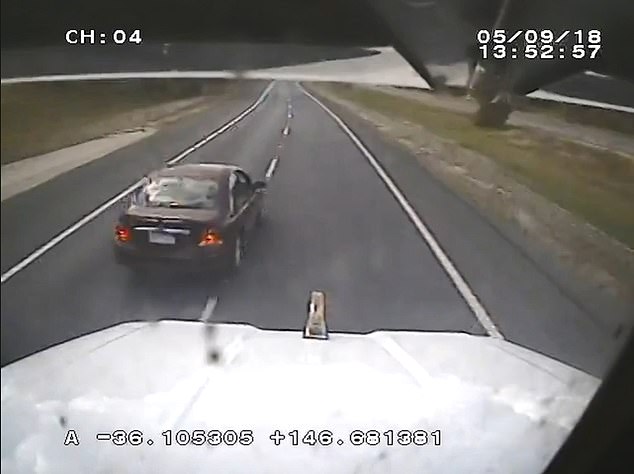 ‘If that truck struck your car, there could have been multiple fatalities.

‘The margin of error on that road is very, very slim.’

Robertson pleaded guilty to careless driving and two other charges were withdrawn.

On top of his half-year disqualification, he will have to pay an $889 fine including costs. 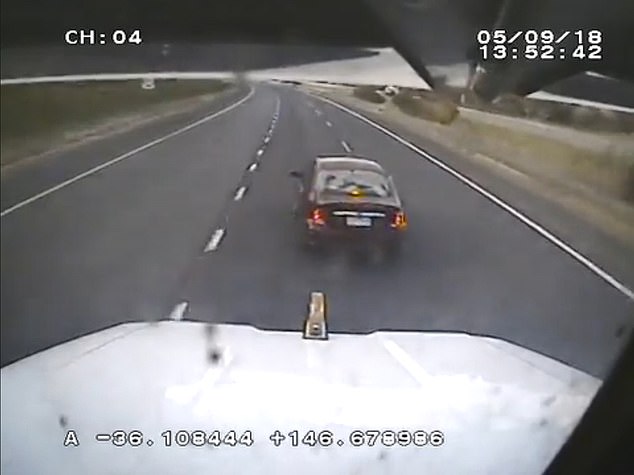