Hundreds of desperate former military interpreters are still trapped in Afghanistan more than one year after the Taliban swept into Kabul.

They are among more than 6,000 Afghans who worked with UK troops hoping to escape the Islamist group and find sanctuary in Britain.

The Taliban is said to have stepped up its hunt for those who worked for Western forces with two ex-translators brutally beaten and another tortured.

A former senior officer in the Afghan Special Forces – who worked alongside UK troops and was waiting to hear if he could come to Britain with his family – was shot dead just weeks ago. Another seven of his colleagues are missing after they were caught by the Taliban.

On Monday, the group celebrated the first anniversary of retaking Kabul.

The group’s capture of the capital had been the culmination of a major three-month offensive last summer.

This newspaper’s award-winning Betrayal of the Brave campaign has highlighted the cases of interpreters who stood shoulder to shoulder with British forces but were left behind when troops pulled out last August.

Hundreds of desperate former military interpreters are still trapped in Afghanistan more than one year after the Taliban swept into Kabul. Pictured: Taliban fighters celebrate one year since they seized the capital

About 650 former interpreters and people working in ‘similar key roles’ have been forced into hiding as they wait to escape Afghanistan.

But it is expected to take at least seven months before they and other ‘eligible’ Afghans can be brought to Britain as the Taliban prevents escape efforts.

Thousands of applications under the Afghan Relocations and Assistance Policy (ARAP) scheme have still to be decided and extra officials have been drafted in to deal with the backlog.

However, in a major breakthrough, new escape routes may be opened and the Government hopes that up to 1,000 people can be moved each month. 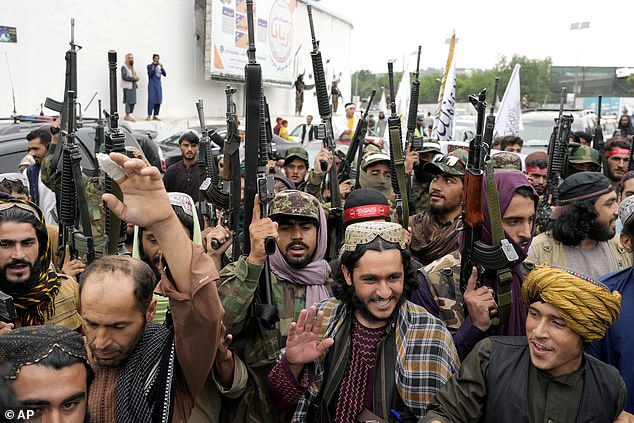 These are in addition to more than 1,000 people who have applied for resettlement in the UK under a second scheme after working as contractors.

They include 100 Afghans who worked for the British Council teaching English and UK values across the country. Many of their pupils are now members of the Taliban searching for them, they say.

One former British Council teacher was arrested and beaten so brutally that he needed three weeks of hospital treatment, while a former interpreter was tortured with electric shocks.

Rafi Hottak, a former supervisor of interpreters who campaigns for his ex-colleagues, said: ‘It is shameful the number of people still stuck in Afghanistan and waiting for their cases to be decided.

‘It is clear the Taliban is conducting searches and when they find their targets they are being beaten, tortured and – in some cases – killed. It underlines the urgency of the situation and the need for the UK to act quicker.’ 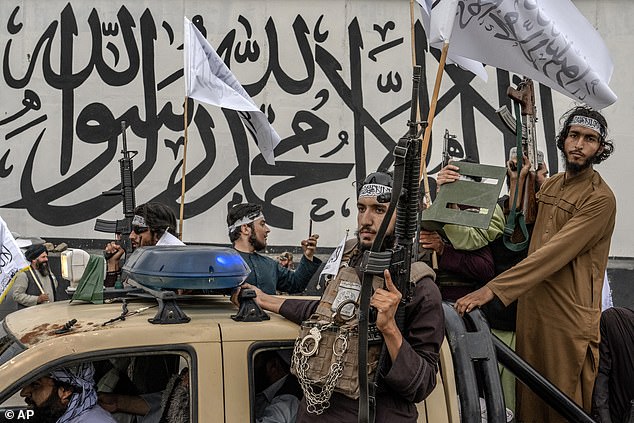 Ex-translator Mohammad Mirza said he also fears he has been ‘forgotten’ by Britain as he tries to escape from Afghanistan. The 33-year-old was told that he and his family would be evacuated on an RAF flight last year.

However his hopes were shattered after a suicide bomber killed 180 people – including 13 US troops – at Hamid Karzai International Airport on August 26.

The married father of five, who has now been forced into hiding in Kabul, said: ‘To be so close to freedom and then not to make it was heartbreaking and depressing.

‘To be stuck here still living a life of hardship, struggling for food and in fear of every knock [at the door] is cruel of Britain.

‘I am in real danger because of my work for Britain. But I feel I have been forgotten.’

Around 15,000 people were rescued during Operation Pitting – the UK’s original evacuation mission – last August. Nearly 4,000 more have been helped after escaping into third countries.

It is understood that more than 80,000 Afghans applied for the ARAP scheme although only 10,000 people have been relocated under it. A separate scheme, the Afghans Citizens Resettlement Scheme, will provide a pathway for 20,000 over the next four years.

More than a dozen interpreters are trapped in third countries after fleeing the Taliban. Many are living illegally and fear arrest in countries such as Congo, Greece and Bosnia.

One translator Adeena, 29, who is stranded in Iran, urged Britain to help, adding: ‘I cannot go back and I can’t stay in Iran.’

They beat my mother while I was in hiding, says Brown’s interpreter

Mashal is on the run from the Taliban and is desperately waiting for sanctuary in the UK after applying more than 13 months ago.

He has been told he is on a Taliban ‘death list’ because of his work for ‘infidel’ troops.

Mashal, 31, narrowly survived a Taliban ambush this year, escaping with ‘just a badly a broken nose’ because Taliban sympathisers failed to pick him out at an identity parade. ‘I was incredibly lucky,’ he said. ‘I would have been killed if they had confirmed my identity.’ 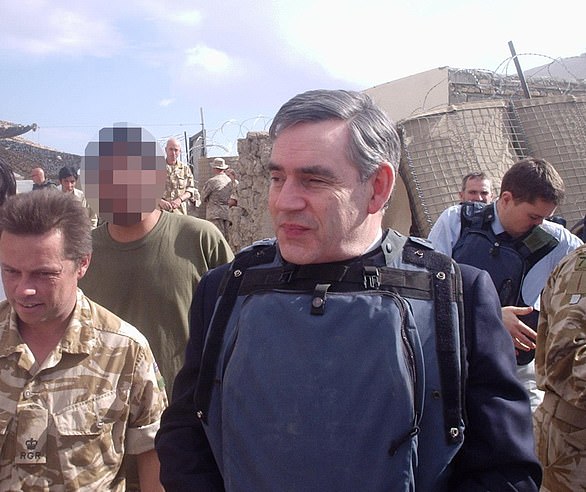 Former interpreter Mashal (pixelated), who  translated for Gordon Brown in Afghanistan, is in hiding and fearing for his life

His family’s home has been visited at least three times by Taliban fighters looking for him. On one of these visits, his mother was beaten so badly that she was hospitalised for two weeks. Mashal said he spent two years with British forces from 2009 to 2011 as they trained the Afghan National Army.

He accuses Britain of ‘cruelty’ for the months of silence around his case as the Taliban step up their search for those like him.

Father-of-three Faiz also lives in hiding and believes he has been abandoned. He worked as a security guard at the British Embassy for almost a decade. ‘I have been left behind by the country I helped protect,’ the 34-year-old said. ‘My face is well known to the Taliban, who would kill me if they found me.’

Last August, as the Taliban took over, he said he received a call from Britain’s ARAP [Afghan Relocations and Assistance Policy] team telling him his family should go to the airport. But due to bomb threats at Kabul airport, he said they were forced to turn back.