Black Lives Matter protesters have taken to the streets of London for the second day running in solidarity with those in the US over the death of George Floyd.

Hundreds of demonstrators were packed into Trafalgar Square on Sunday, chanting ‘I can’t breathe,’ the words Floyd was heard gasping as a white police officer knelt on his neck in Minneapolis.

Having spent the last few months in coronavirus lockdown, very few of the attendees appeared to be concerned about social distancing.

It comes as dozens of American cities have been set ablaze amid violent rioting and violent clashes with police officers over the death of Floyd on Monday.

LONDON, ENGLAND: Hundreds of demonstrators were packed into Trafalgar Square on Sunday, chanting ‘I can’t breathe,’ the words Floyd was heard gasping as a white police officer knelt on his neck in Minneapolis 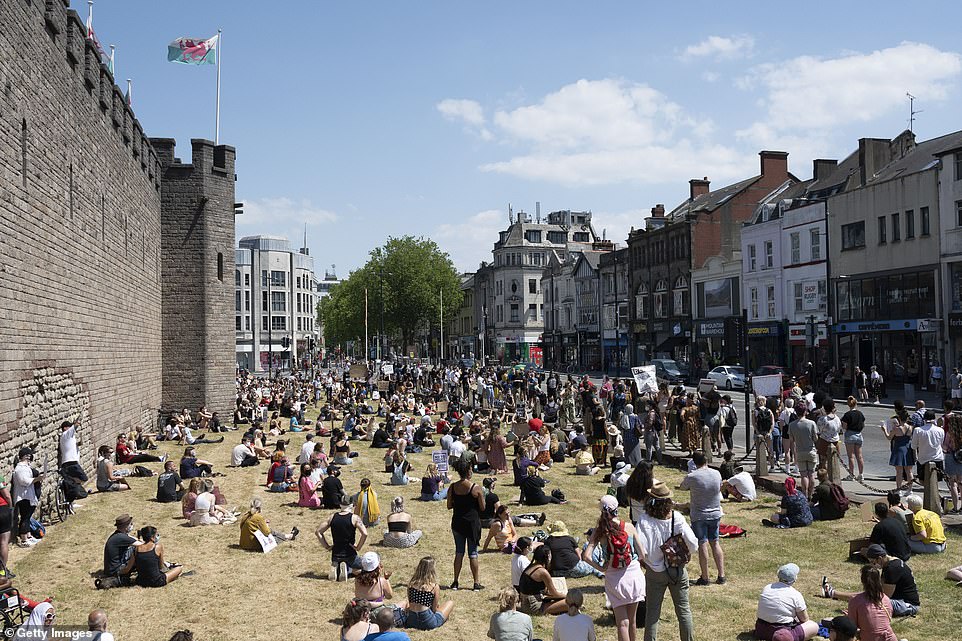 CARDIFF, WALES: Black Lives Matter protesters outside Cardiff Castle in Wales on Sunday in solidarity with other protests around the world 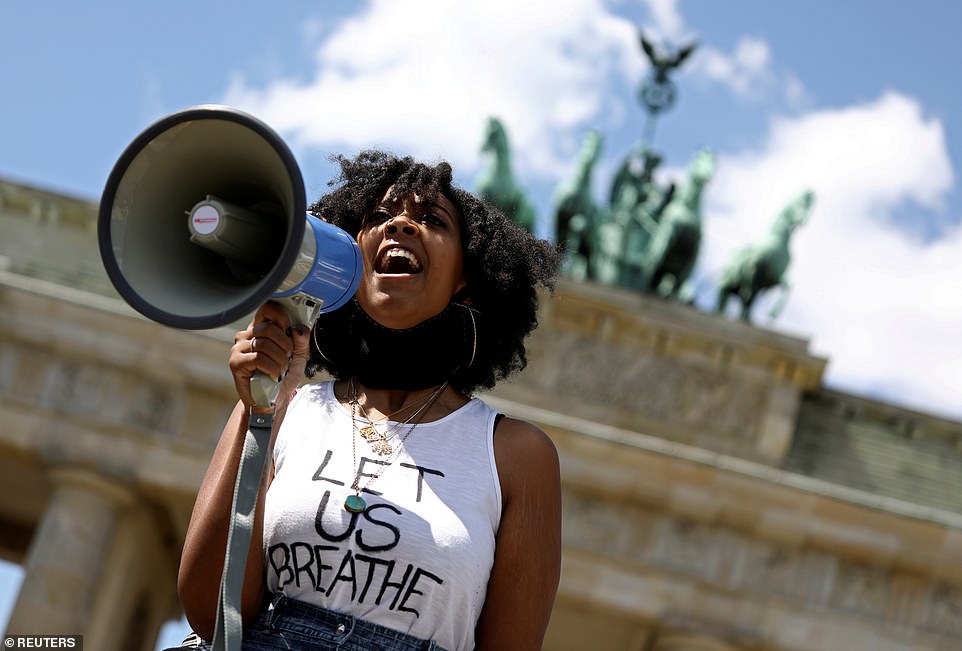 BERLIN, GERMANY: A woman holds a megaphone during a protest against the death in Minneapolis police custody of African-American man George Floyd, at the Brandenburg Gate 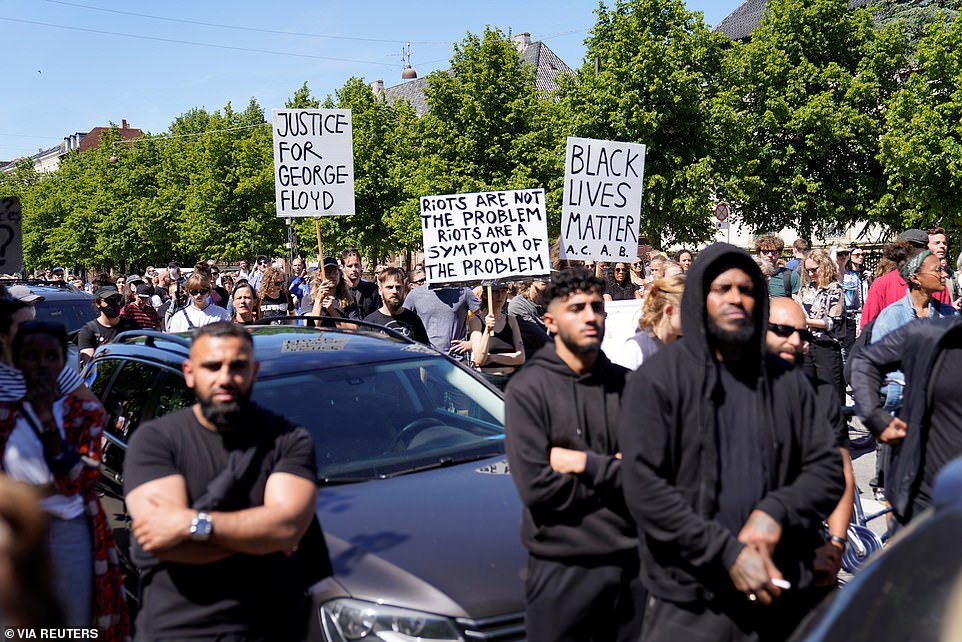 COPENHAGEN, DENMARK: Hundreds of protesters in the Danish capital on Sunday to protest the killing of George Floyd 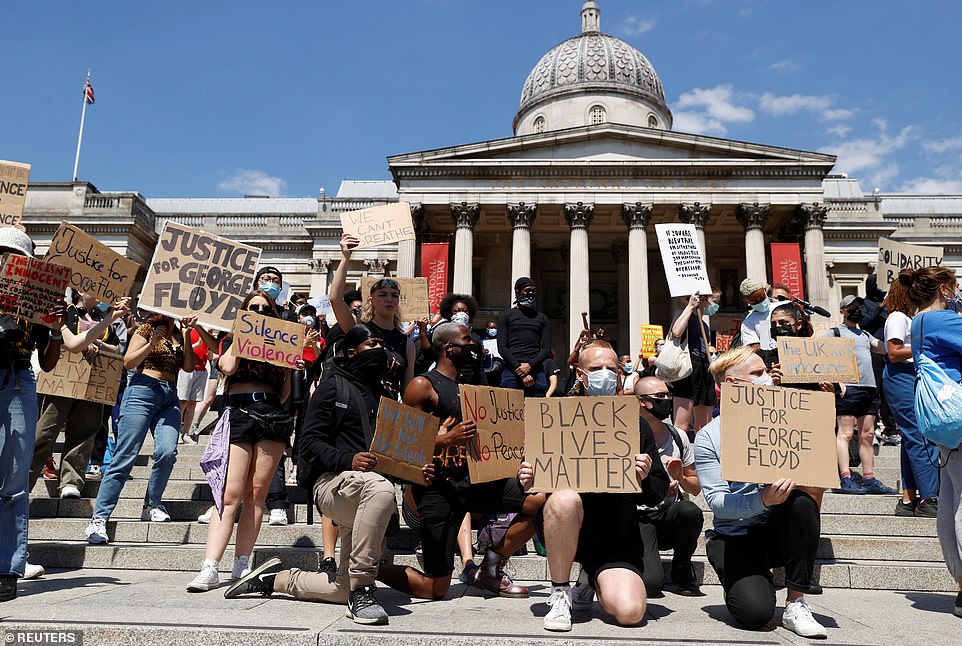 People holds signs during a protest against the death in Minneapolis police custody of African-American man George Floyd, in Trafalgar Square, London, Britain 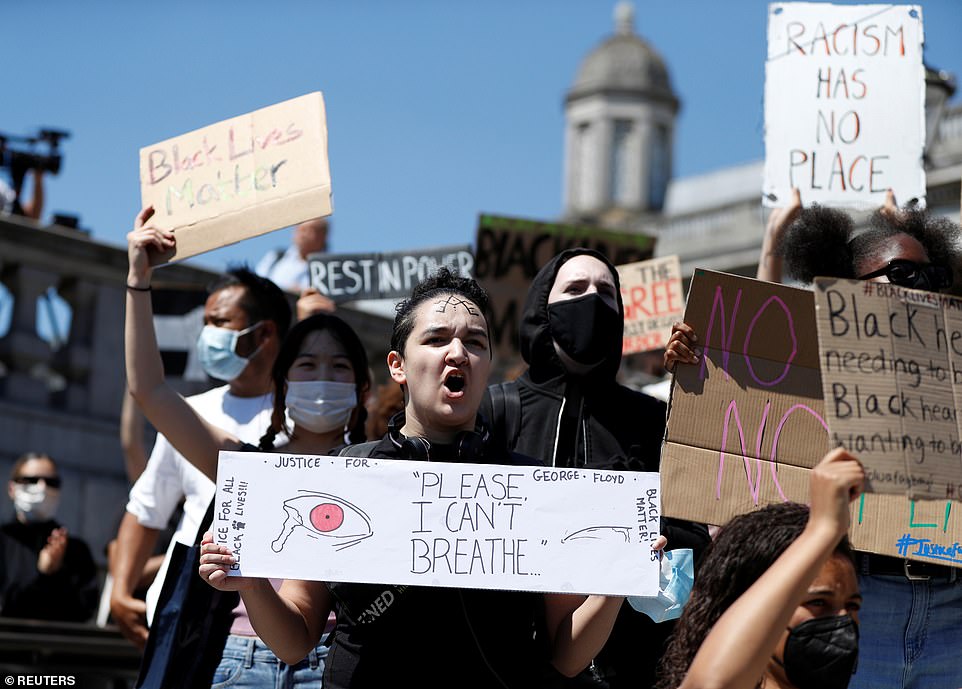 Foreign Secretary Dominic Raab today appealed for the US not to ‘tear itself apart’ and said that the Floyd case was ‘very distressing’.

Asked about Donald Trump’s response, Dominic Raab told Sky: ‘I’m not going to start commenting on the commentary or indeed the press statements that other world leaders make, or indeed the US president.

‘Footage of what happened to George Floyd was very distressing, as has been the scenes across America of the rioting and some of the violence.

‘And what we do know is that the lead suspect has now been charged with murder, there is a federal review and we want to see de-escalation of all of those tensions and American come together.’

Later he told the BBC: ‘I’ve long kept to the self-imposed guidance not to comment on what President Trump says or indeed other world leaders, it is not really what my job is.’

Mr Raab said he wanted to see the US ‘come back together not tear itself apart over this, and of course that is a very distressing and upsetting case’.

But he insisted he would not comment on the backlash against Donald Trump’s response to a wave of furious protests across the US, merely saying he wanted the country to ‘come back together.’

BLM have said of their protest in London: ‘We are doing this to place pressure on the American government and show that this is a world wide issue.’

BLM protests were also taking place at the Brandenburg Gate in Berlin, Germany, and at the US Embassy in Denmark’s capital, Copenhagen.

It comes after protests by BLM in southeast London yesterday, with hundreds marching through the streets of Peckham to demand justice.

Buses and cars were forced to a standstill with groups shouting ‘no justice, no peace’ and ‘stop killing the mandem.’

Further protests are planned by the BLM movement in Birmingham, Manchester, Cardiff and Glasgow, as well as the US Embassy in London.

Footage of another protest in North London on Saturday showed a smaller group of demonstrators marching and carrying a banner reading ‘abolish the police’.

Most of those attending both protests were seen standing closer together than the two-metre recommended to prevent the spread of coronavirus. Many could also be seen without face masks. 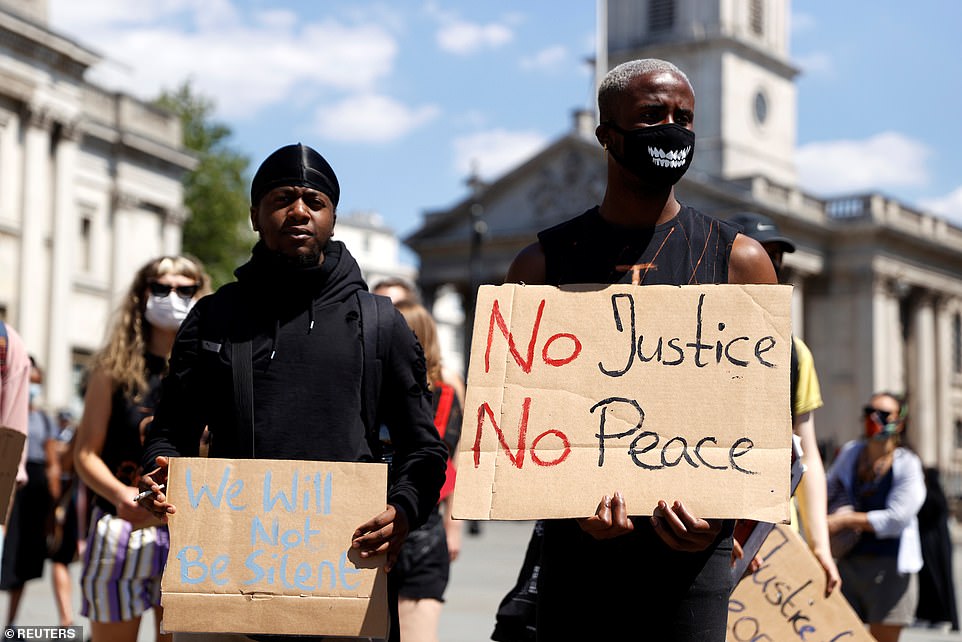 Men holds signs during a protest against the death in Minneapolis police custody of African-American man George Floyd, in Trafalgar Square 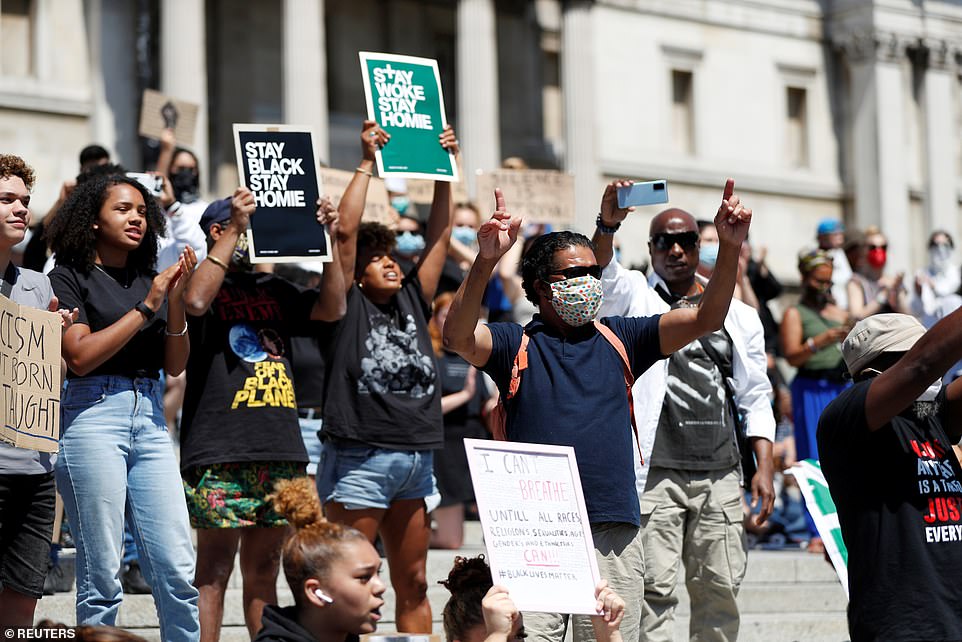 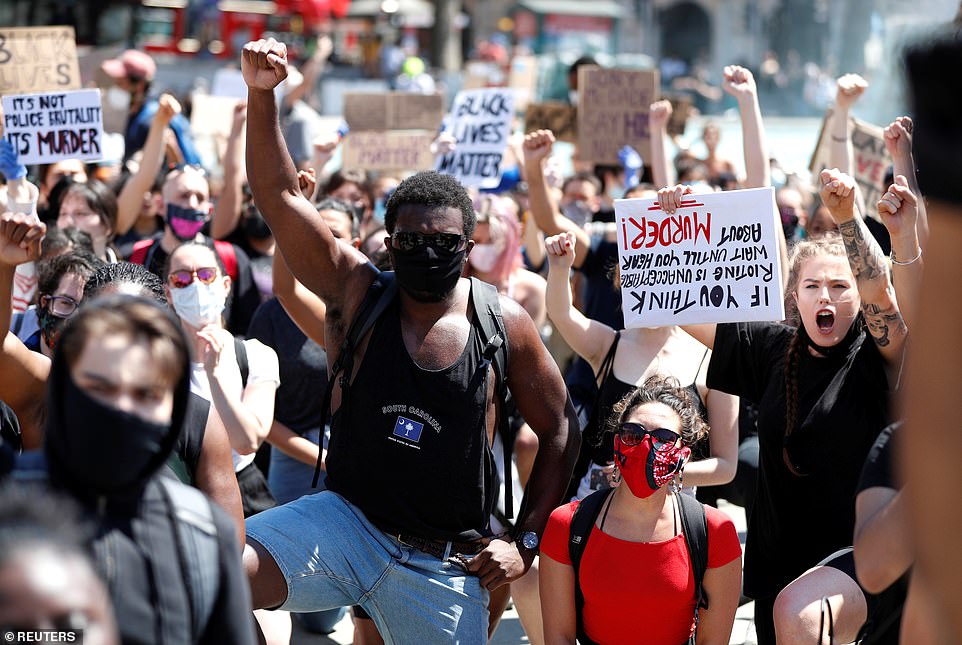 Crowds of Londoners standing just feet apart amid the pandemic as they protest the death of George Floyd in Minneapolis, Minnesota 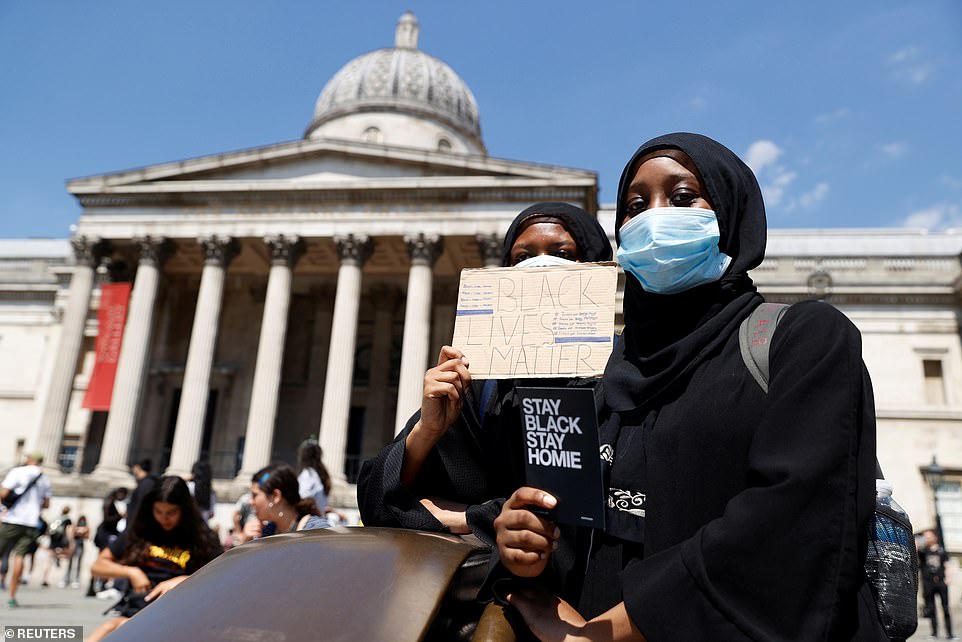 Two women at the BLM demonstration in Trafalgar Square, central London, on Sunday 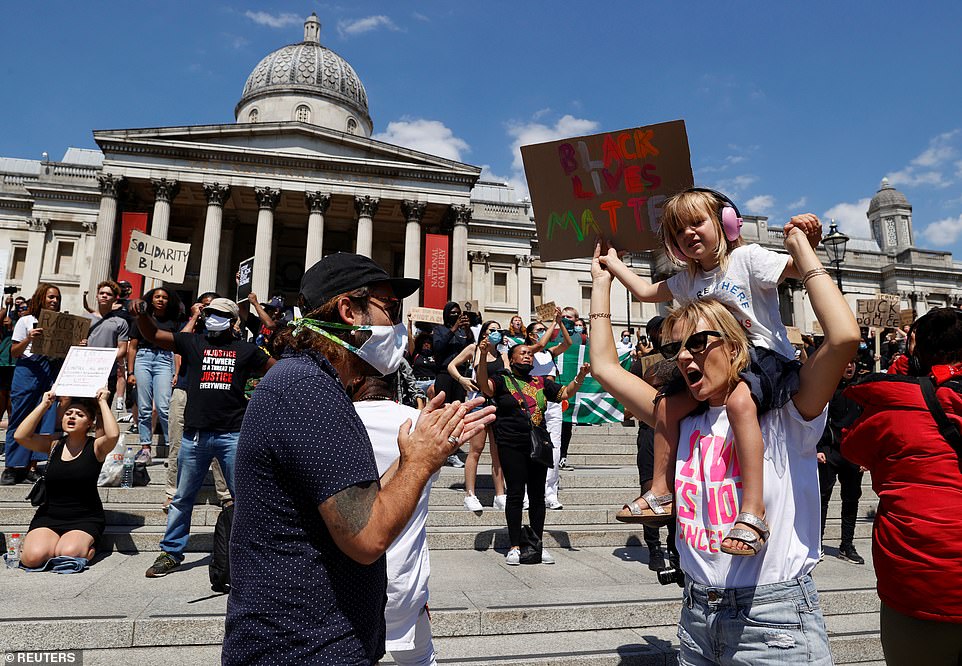 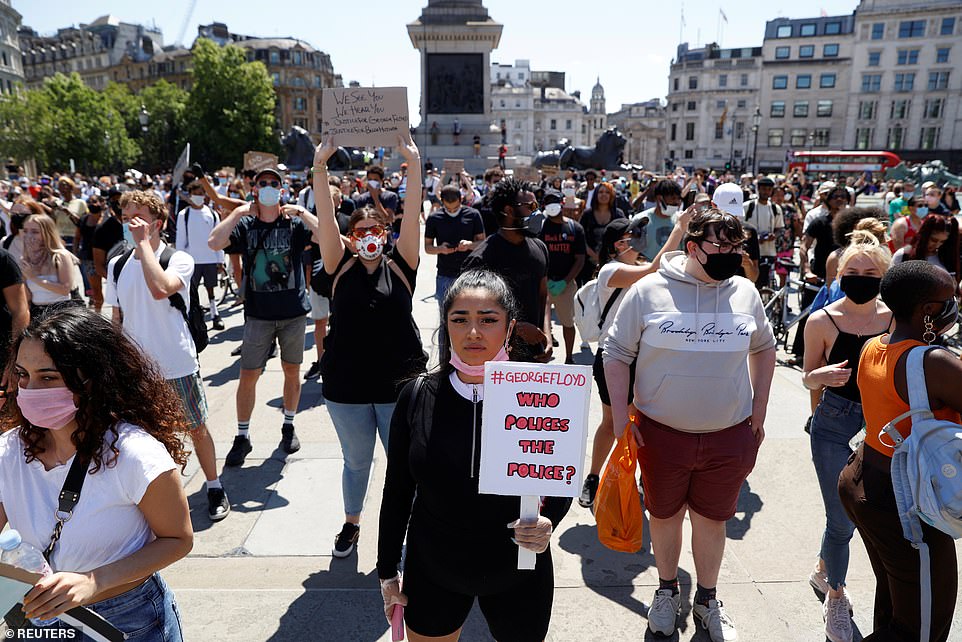 A woman holds a sign saying: ‘Who police the police?’ 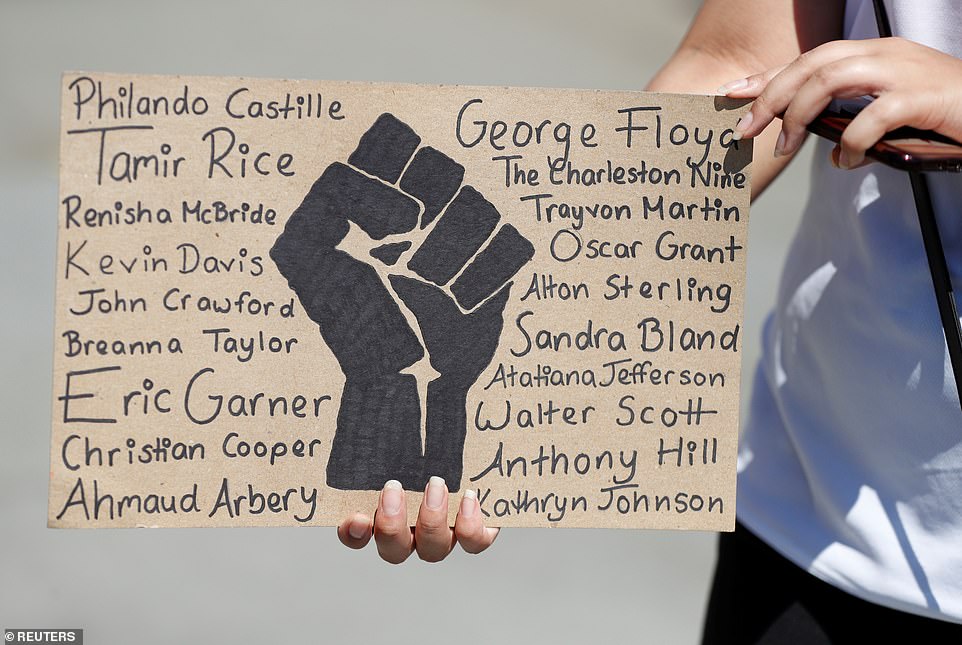 A protester holding a sign with names of those who have died in police custody or while being arrested, or as a result of alleged racial profiling, in the US in Trafalgar Square, London

Last night destruction continued to spread across the United States amid continued outrage at what many believe is a systemic problem of police brutality against African-Americans.

In Minneapolis, protesters were seen fleeing after cops hurled tear gas into the crowds while some responded by launching fireworks back at officers.

The National Guard was activated to defend the White House from attack as the Secret Service agents on the ground struggled to keep control of crowds descending on the seat of the US government.

The Big Apple was ablaze as NYPD vehicles were torched and ransacked while shocking footage emerged of cops violently detaining protesters.

A man was left critically injured in Dallas when he was attacked and stomped on by a group of people when he allegedly tried to defend a store with a large sword. 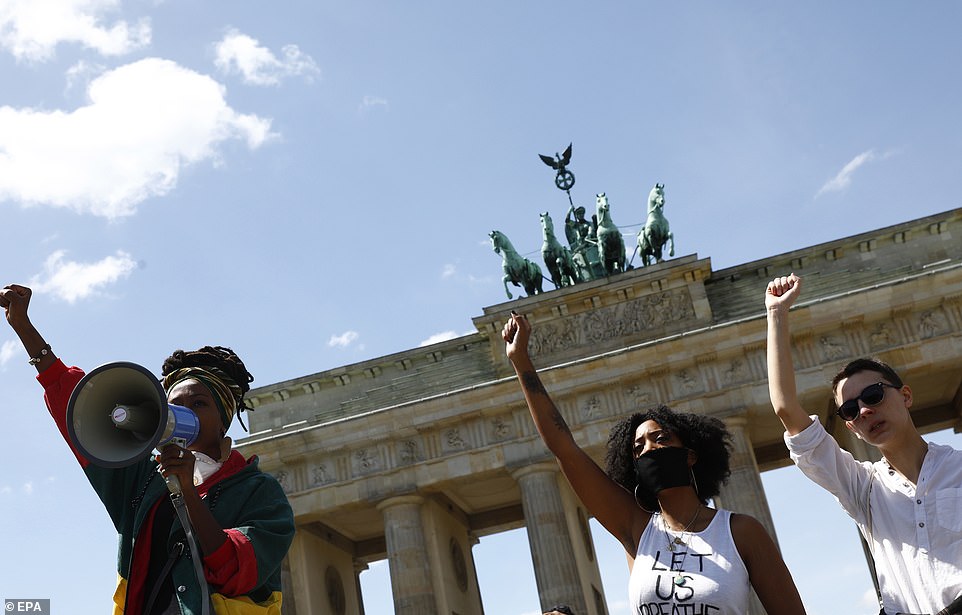 BERLIN, GERMANY: Supporters of the Black Lives Matter movement hold placards and banners to protest against the police brutality in the US following the death of George Floyd 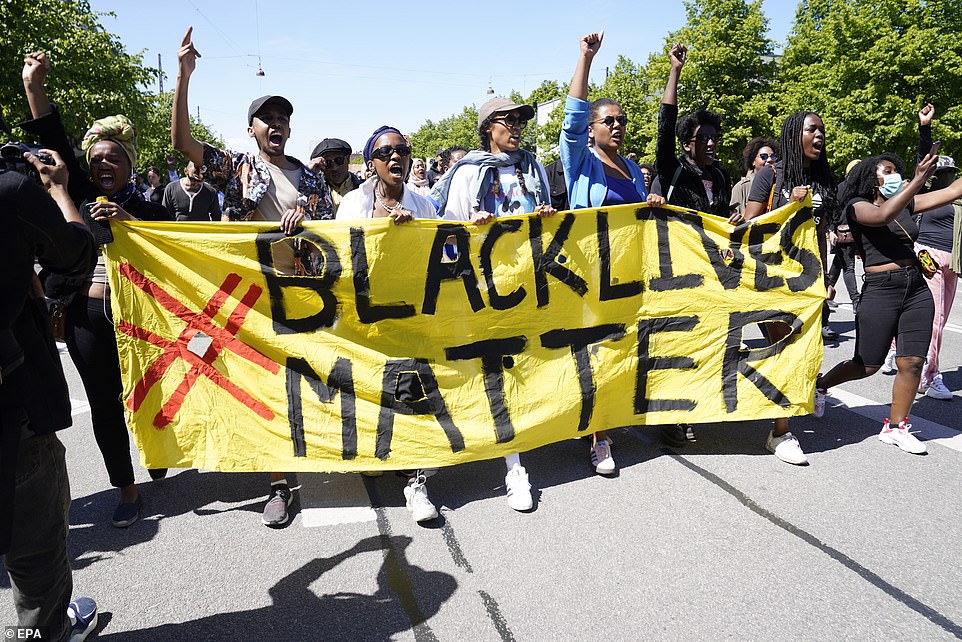 COPENHAGEN, DENMARK: Supporters of the Black Lives Matter movement protest in front of the US Embassy

In Atlanta a cop suffered ‘significant injuries’ when they were hit by an ATV, while in Chicago, a man commandeered a police horse and rode off on it.

A total of 11 states and the District of Columbia had activated the National Guard by the early hours of Sunday, as law enforcement buckled under the strain of the protests. 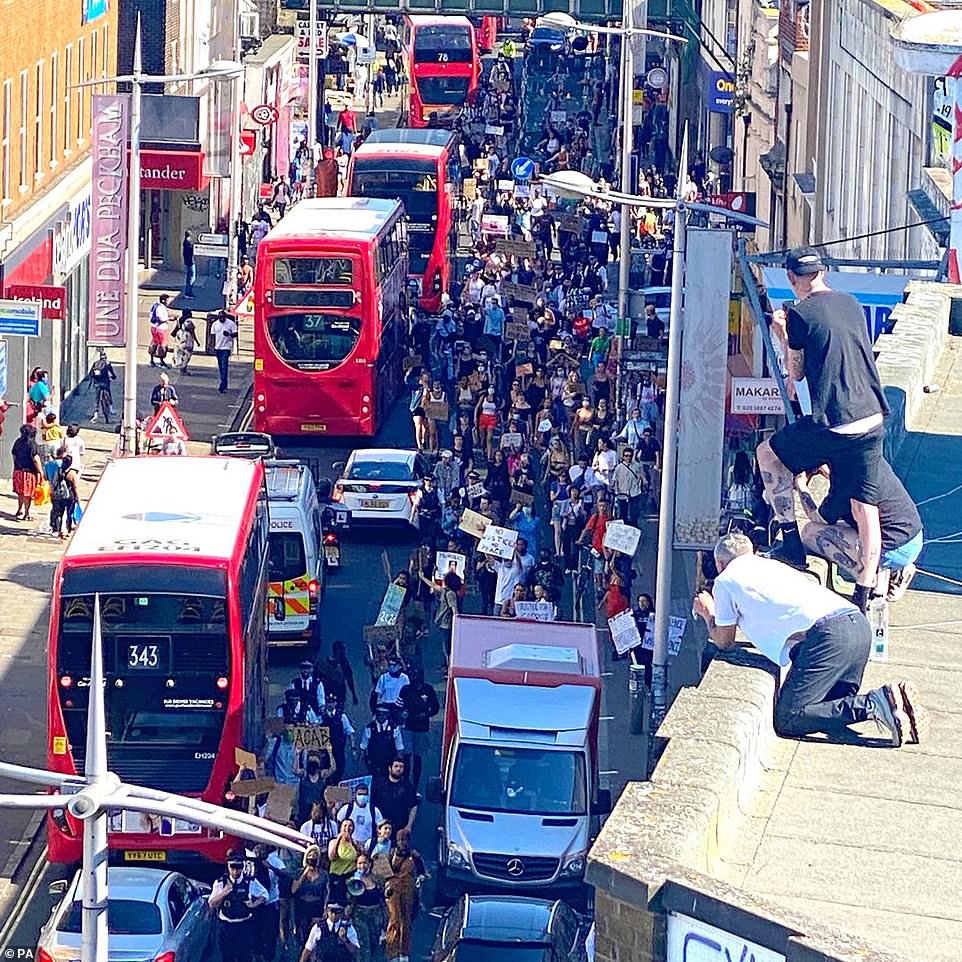 In Peckham, London, buses and cars were forced to a standstill on Saturday afternoon when hundreds of Black Lives Matter protesters furious at the Floyd’s slaying marched along the main road 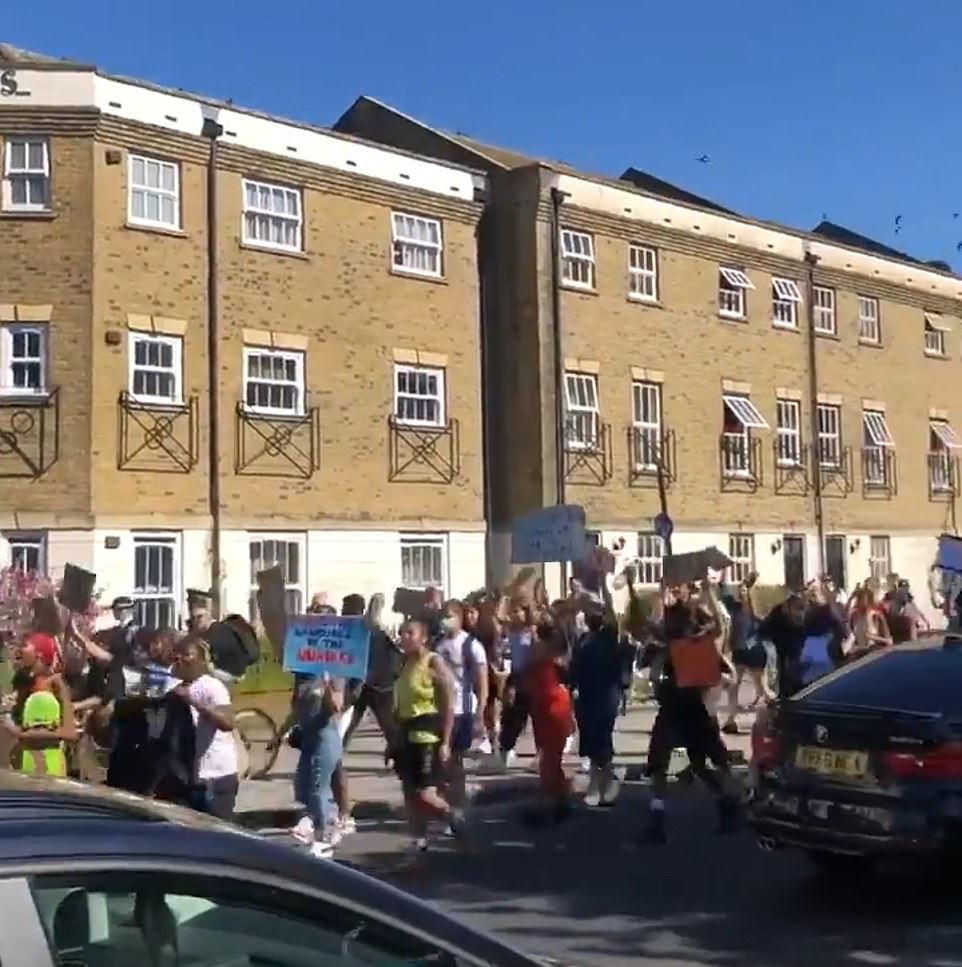 Donald Trump has put the Army on notice to deploy to the streets with a four-hour notice – the first time this will have been done in almost 20 years during the 1992 LA riots over the beating of black man Rodney King by cops.

Minnesota – where Floyd died – has borne the brunt of the protests which began there Tuesday before fanning out across the country. 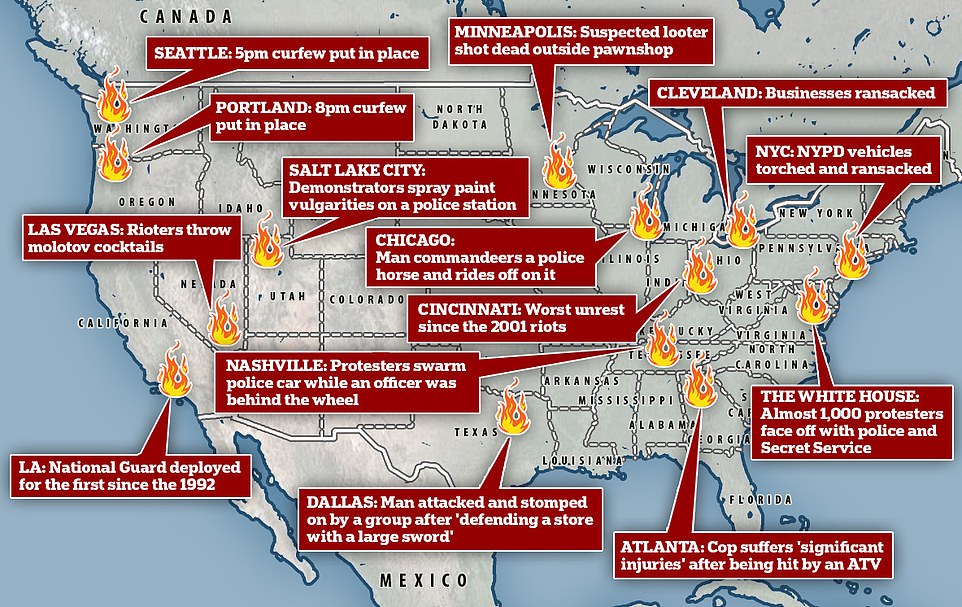 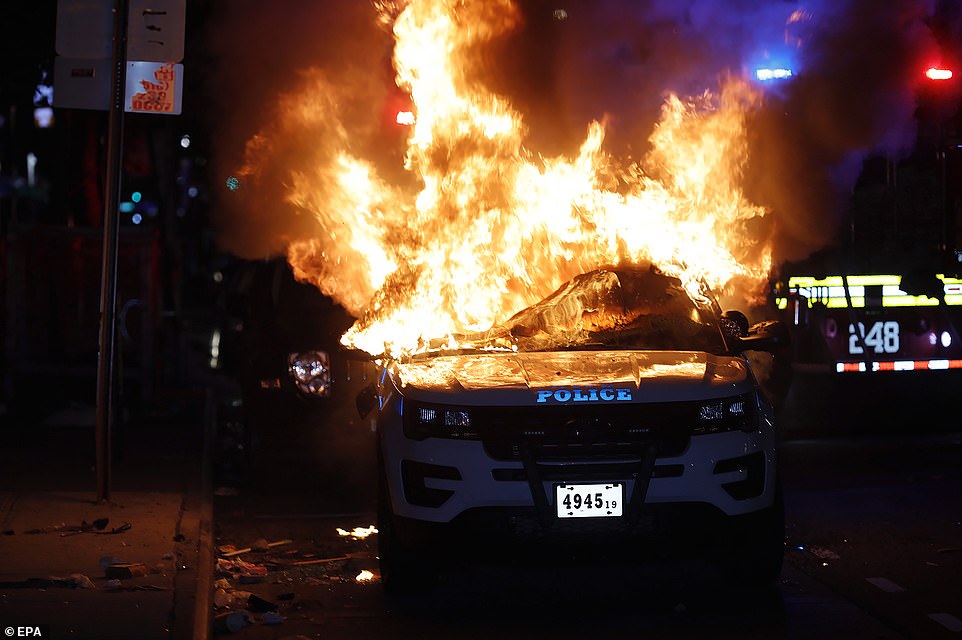 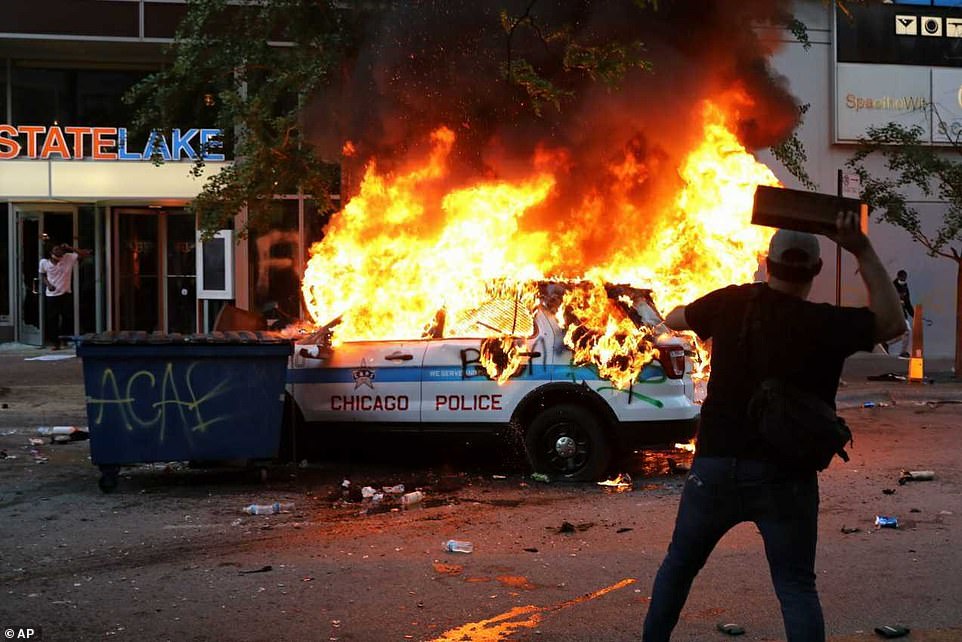 Chicago: A Chicago police vehicle is set on fire during violent protests and bricks are hurled at it 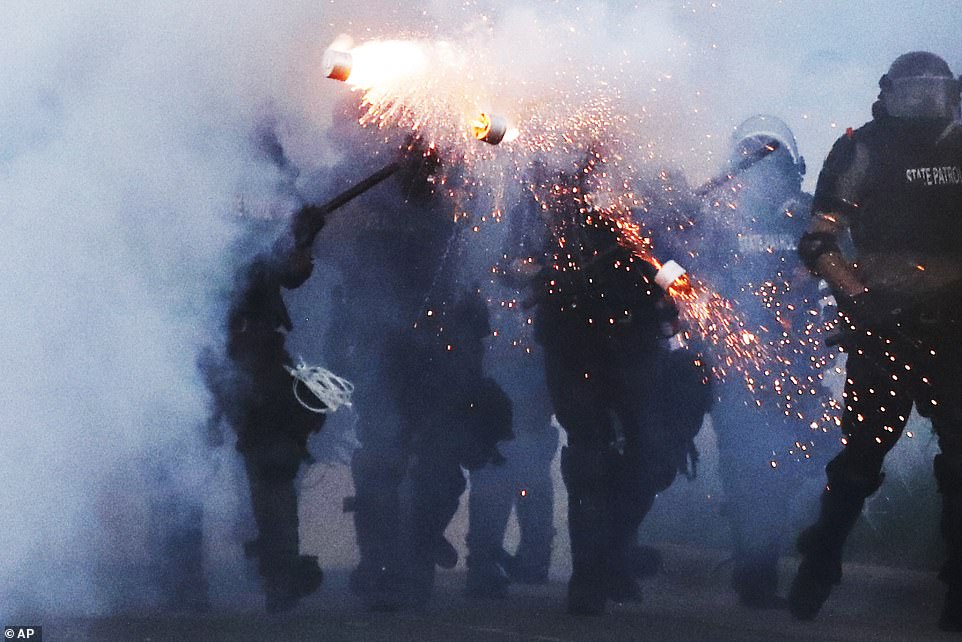 Minneapolis: Tear gas and fireworks go off in the streets Saturday night on day five of protests over Floyd’s death

Rioting was still going on in the early hours of Sunday, with the Minneapolis police department reporting a big group of protesters on foot and in vehicles throwing missiles of some sort at cops.

Minnesota Dept of Corrections Commissioner Paul Schnell announced early Sunday there had been ‘dozens’ of arrests through the night but no ‘substantive’ injuries.

The Minnesota National Guard announced at around 10.30pm it was sending 10,800 troops in to tackle protests Saturday night, as pleas for people to observe curfews fell on deaf ears.

The Minnesota National Guard said on Twitter it already had more than 4,100 citizen-soldiers and airmen already in the twin cities of Minneapolis and St. Paul and was ramping it up to a staggering 10,800. 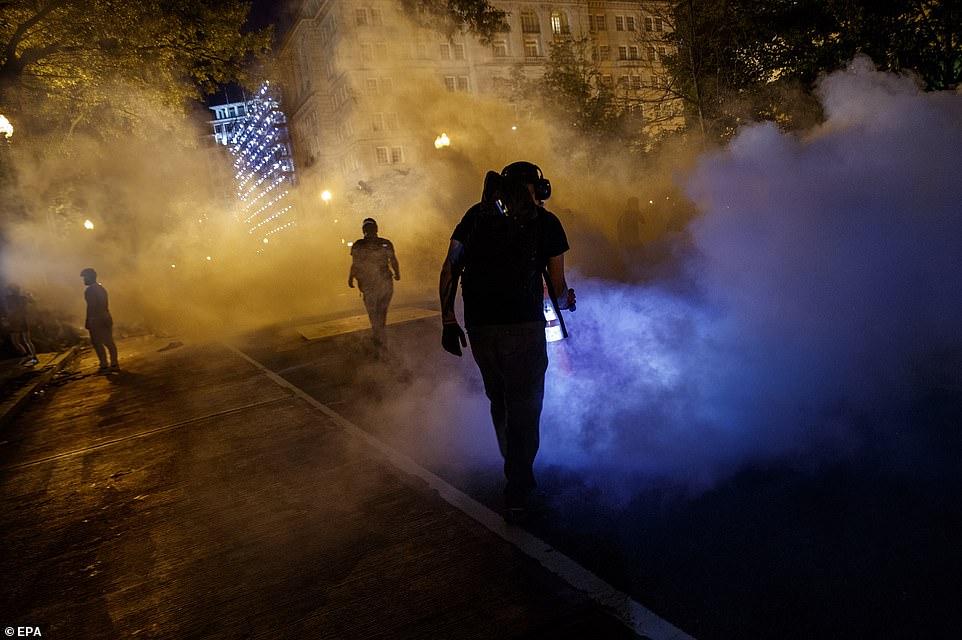 Washington DC: The National Guard was activated to defend the White House from attack as the Secret Service agents on the ground struggled to keep control of crowds descending on the seat of the US government 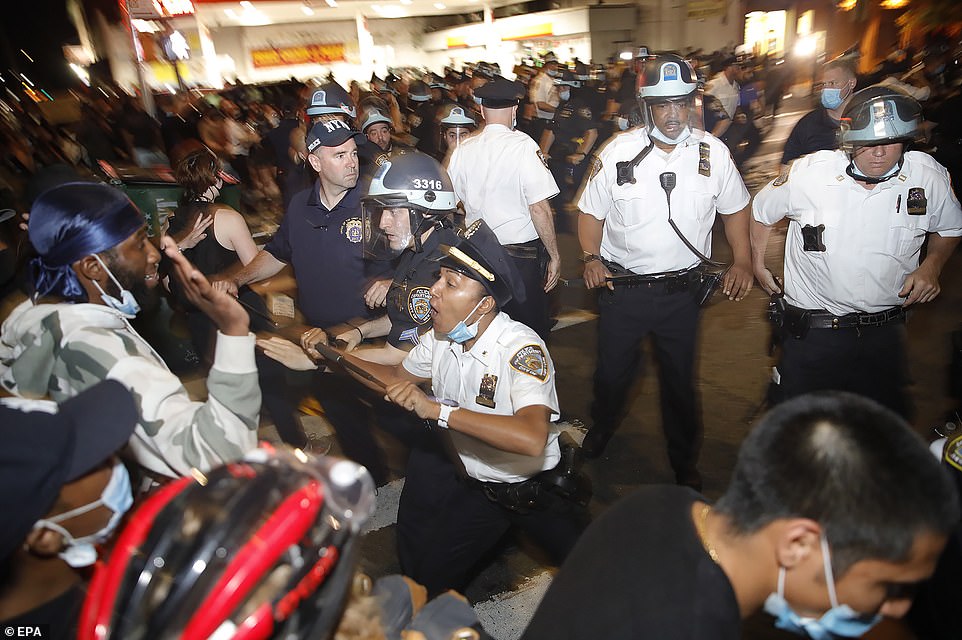 There were just 700 on duty on Friday.

State police officers were seen in their masses surrounding the fifth police precinct Saturday night after officials insisted that the city would be brought under control following four nights of widespread destruction including a suspected looter being shot dead, businesses being burned to the ground and police officers forced to flee for their lives when a police precinct was stormed and torched.

The city was filled with smoke Saturday as protesters let off fireworks and set fires.

Hundreds of protesters had gathered outside the fifth precinct and were driven out by state cops using tear gas and firing rubber bullets. 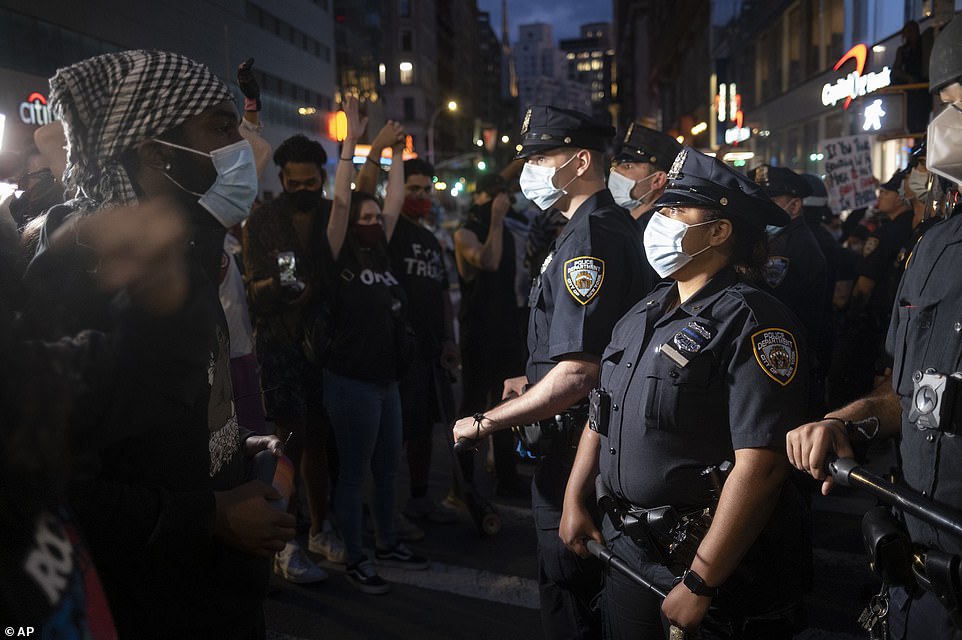 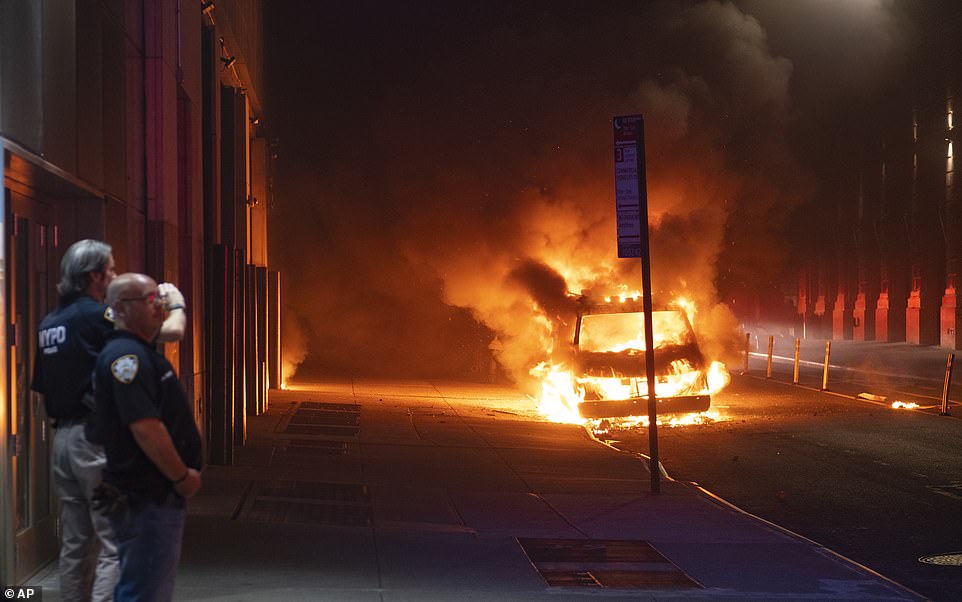 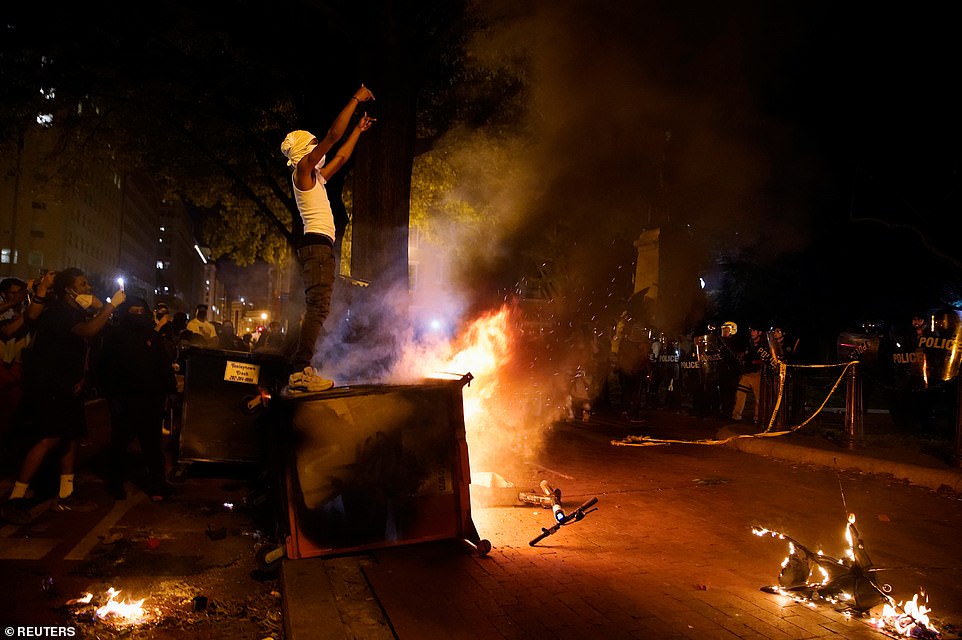 Washington DC: Demonstrators gesture next to a fire during a rally near the White House 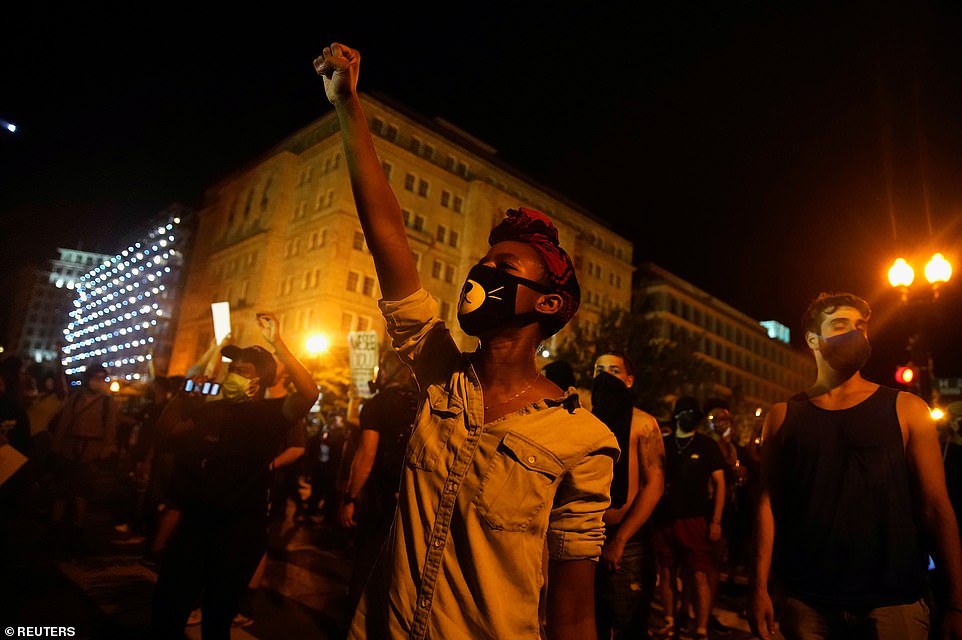 Washington DC: The seat of the government was under threat from protesters leading to the National Guard being activated in Washington DC 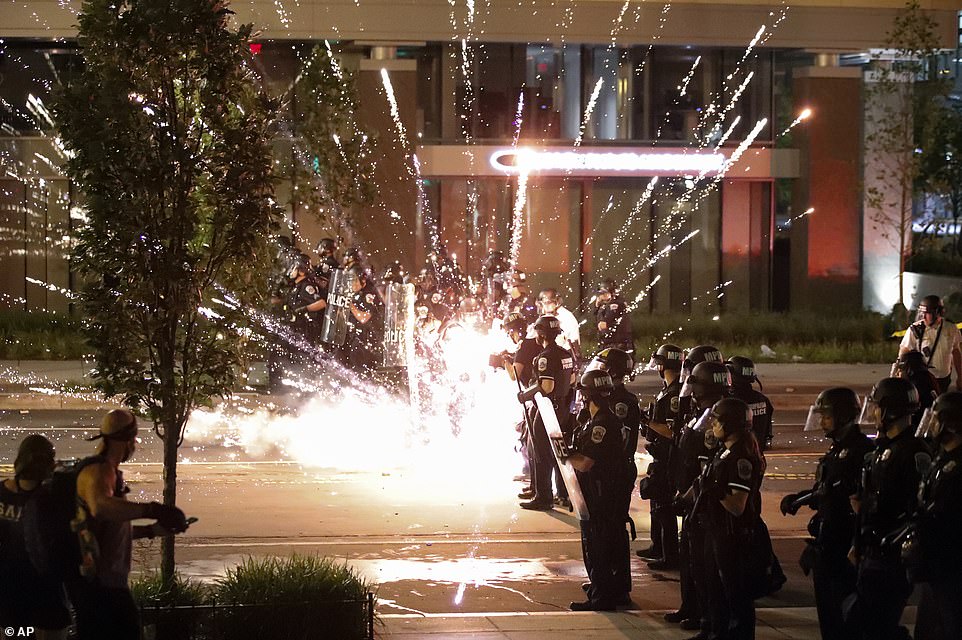 Washington DC: A firework is hurled by a protester and explodes by a police line

Footage showed protesters had retreated while the officers increased their circle around the vicinity – defending the police station for fear it will be stormed and torched like the third precinct was Thursday.

People marching from Minneapolis to St. Paul were also met with tear gas from officers stopping them in their tracks and sending masses fleeing from the potent chemical.

This comes as Governor Tim Walz has warned that a renewed spike in coronavirus cases could hit residents as protests have seen thousands take to the streets, while he admitted that the state’s jails cannot contain the number of people being taken into custody.