Niki Lauda’s grieving widow placed one of his helmets on his coffin during his funeral in Vienna on Wednesday as hundreds of mourners gathered to pay their respects to the Formula One legend.

Birgit Lauda and his two sons Mathias and Lucas were pictured laying wreaths, flowers and pictures of Lauda on his coffin as they paid their respects to the F1 legend St. Stephen’s Cathedral in his home city of Vienna.

Hundreds of fans queued in the rain for hours outside the famous church before they were allowed in to file past the coffin.

The triple world champion, best remembered for his comeback from a fiery crash in 1976 that left him badly burned and scarred him for life, died last week at the age of 70.

Members of Lauda’s family accompanied pallbearers carrying his remains into the gothic cathedral in the morning. His wife Birgit and two of his sons placed Lauda’s red-and-white driver’s helmet on the casket.

Fans then came in and filed past the coffin that was placed on a platform in the centre of the cathedral.

Stars of Formula One past and present were due to attend a private Requiem Mass at 1pm. (11am GMT). 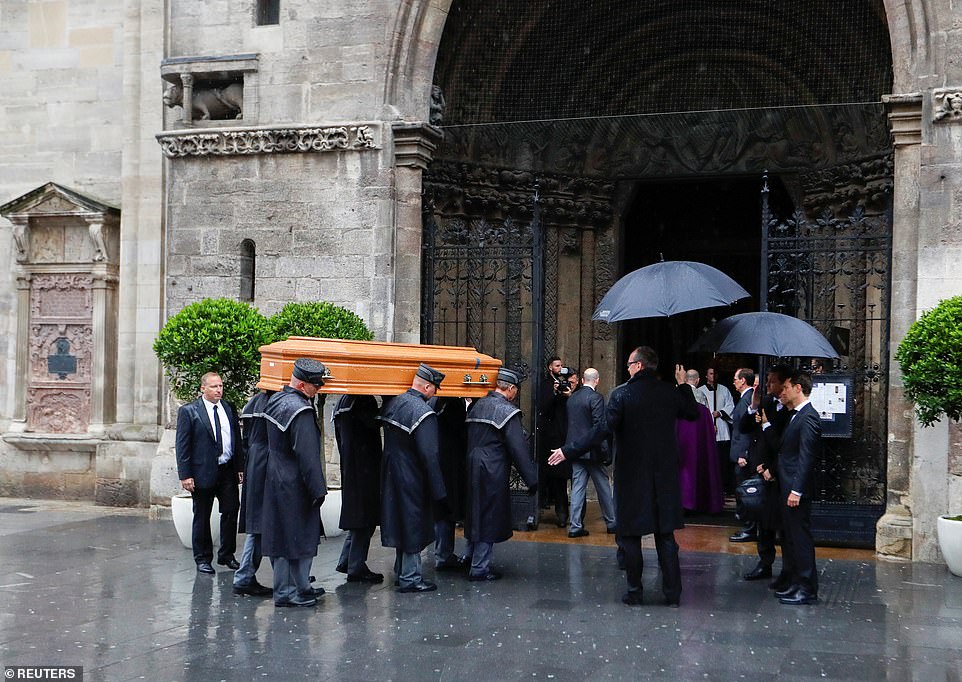 Pallbearers carry Niki Lauda’s coffin as it arrives at St Stephen’s cathedral in Vienna, Austria on Wednesday morning. His funeral is expected to draw a host of stars from the world of Formula One as well as thousands of fans 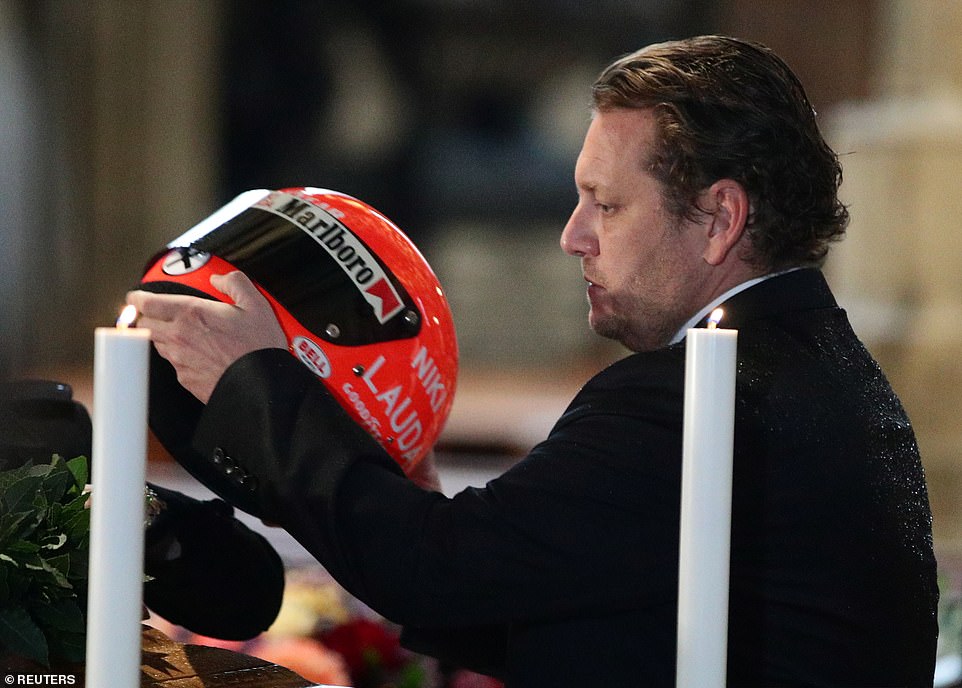 Son Lukas places Niki Lauda’s Formula One helmet on his coffin at the altar of St Stephen’s cathedral. Lauda had two sons with first wife Marlene Knaus – Mathias, a race driver himself, and Lukas, who acted as Mathias’s manager 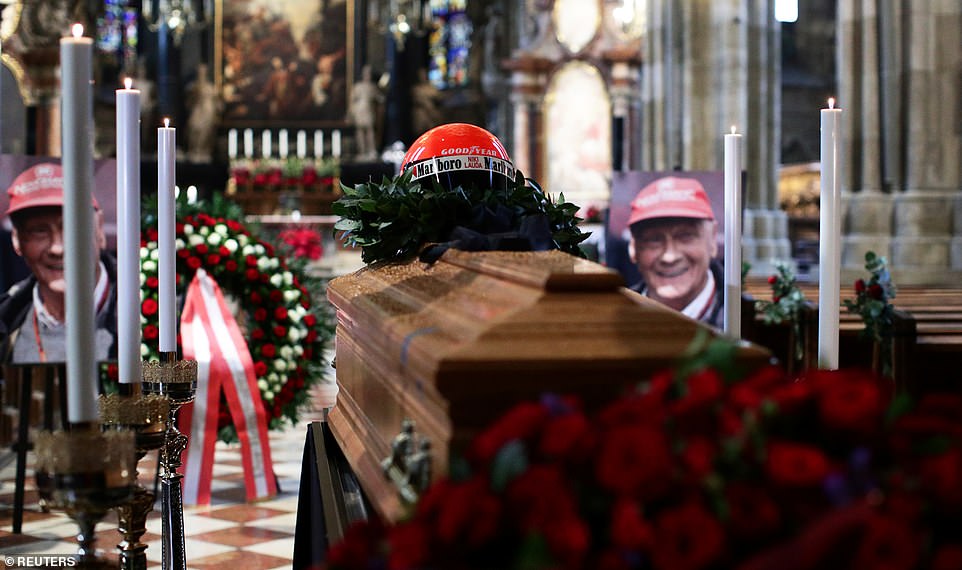 Lauda, who died on May 20 at the age of 70, was laid out in a closed casket topped with his race helmet in the centre of the cathedral 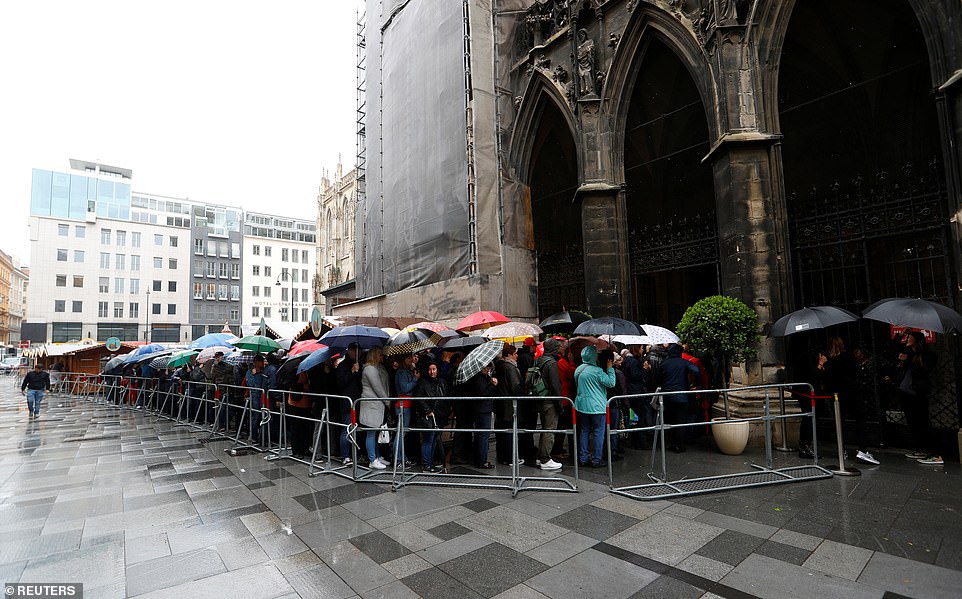 Lauda’s former McLaren teammate Alain Prost will give a reading from the Old Testament at the private ceremony, the Vienna archdiocese said.

Five-time world champion Lewis Hamilton – who raced to victory in the Monaco Grand Prix on Sunday in a helmet bearing Lauda’s colours and name – is also due to join the congregation. 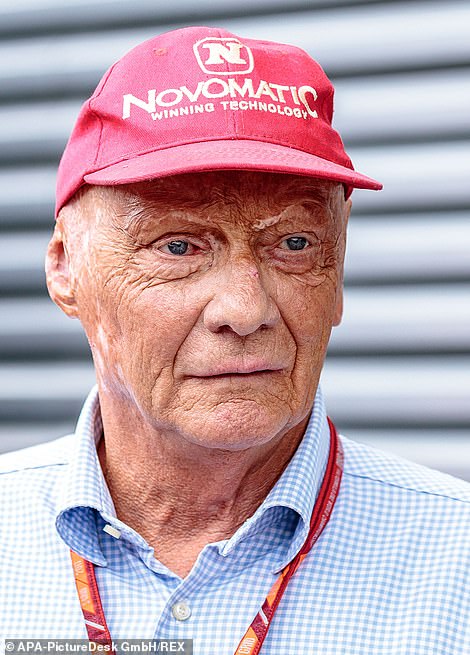 The three-time world champion has been mourned around the world

Pictures showed his close family arriving with the coffin early on Wednesday, hours before the main event was due to take place.

Even after retiring as a race driver, the Austrian remained a fixture on the circuit. Most recently, as non-executive chairman at Mercedes F1 since 2012, he was instrumental in bringing in Hamilton, sparking a run of success for the team.

Lewis Hamilton, who won the Monaco Grand Prix Sunday, said after his victory: ‘That was for you, Niki. Your fighting spirit was right there with me every step of the way. I know you are looking down and taking your hat off to us. I miss you, we truly miss you and I hope we did you proud today, legend,’ Hamilton posted on Twitter after the race.

In all, some 300 VIP guests are expected to attend the mass Wednesday, with 800 further seats and 3,000 standing places open to the general public.

During the mass, songs including ‘Amazing Grace’, ‘Fast Car’ by Tracy Chapman, John Lennon’s ‘Imagine’ and ‘Hero’ by Family Of The Year will be played.

Lauda, who had struggled with health issues since miraculously surviving a 1976 race crash that saw his car engulfed in flames, died at the University Hospital Zurich in Switzerland, nine months after he underwent a lung transplant.

Lauda, recognised by his trademark red cap hiding scars from the accident at the Nuerburgring in Germany, also underwent kidney transplants.

One of the kidneys was donated by Birgit Wetzinger, a former flight attendant, whom the racer and businessman later married and with whom he had twins, a boy and a girl, in 2009.

Lauda also had three other sons from previous relationships.

Besides racing, Lauda’s second passion was aviation. He founded and then sold several airlines with his latest, Laudamotion, going to Ryanair in 2018.

It is not clear where Lauda will be laid to rest. The family reportedly has turned down an offer by the city of Vienna to receive a ‘grave of honour’ in the city’s vast Central Cemetery. 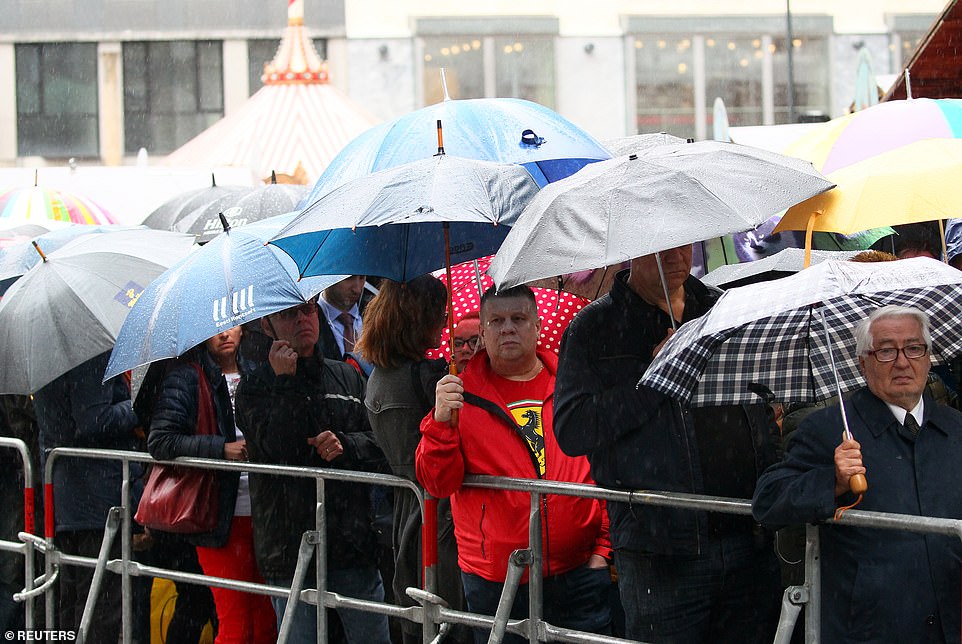 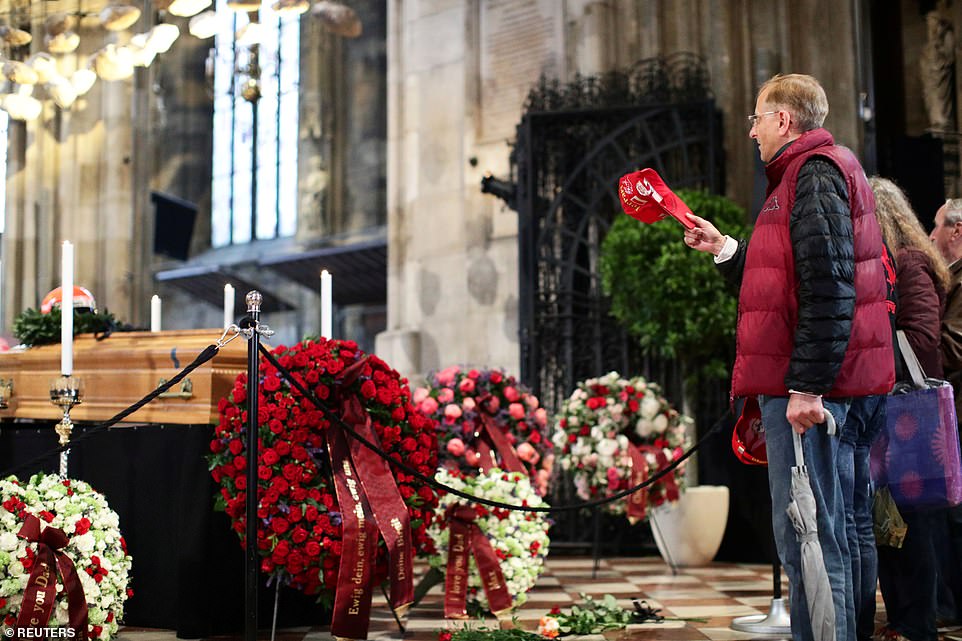 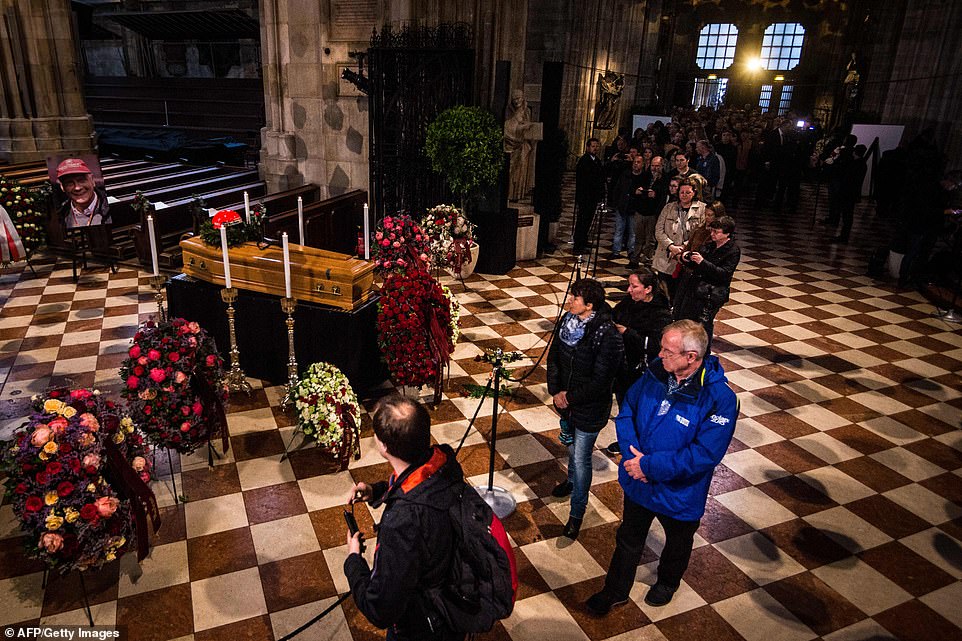 Lauda, who had struggled with health issues since miraculously surviving a 1976 race crash that saw his car engulfed in flames, died at the University Hospital Zurich in Switzerland, nine months after he underwent a lung transplant. Pictured: Fans piling past his coffin 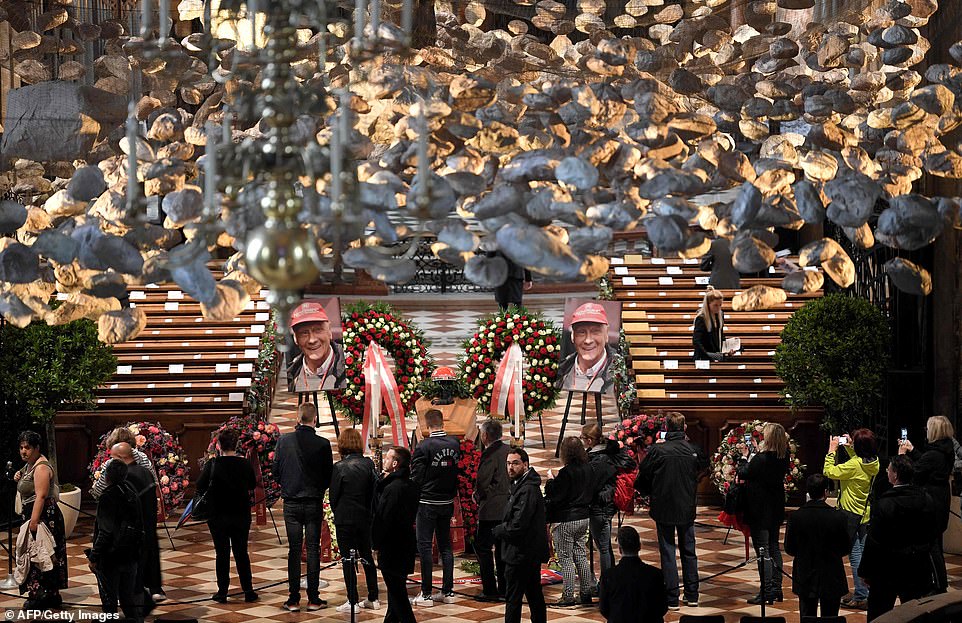 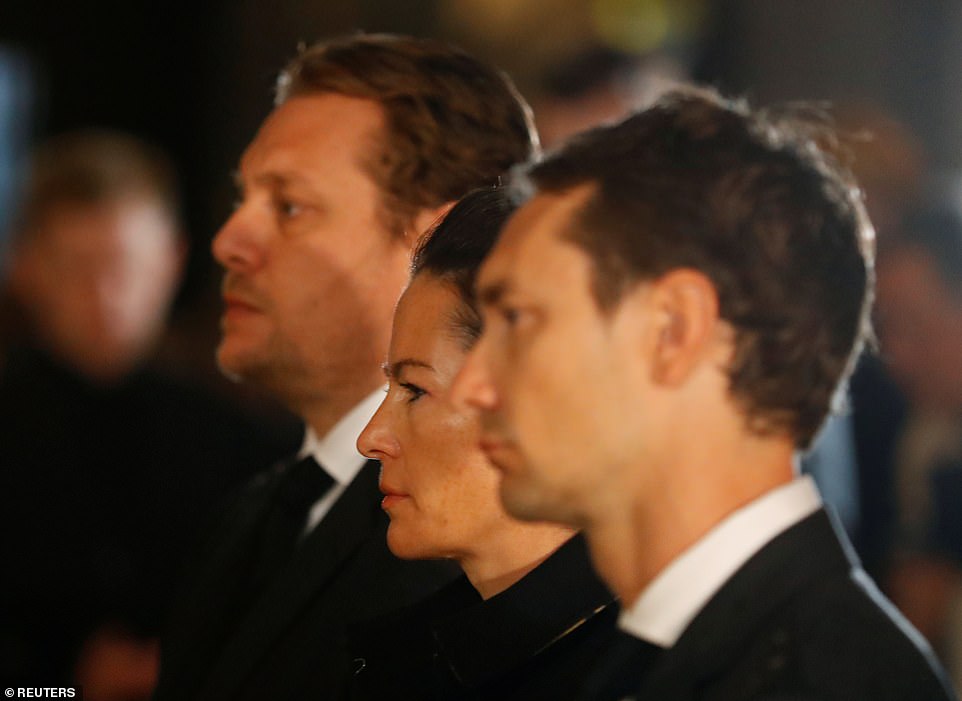 Niki Lauda’s widow Birgit attends his funeral alongside the champion’s sons. The former world champion had a total of four sons and one daughter 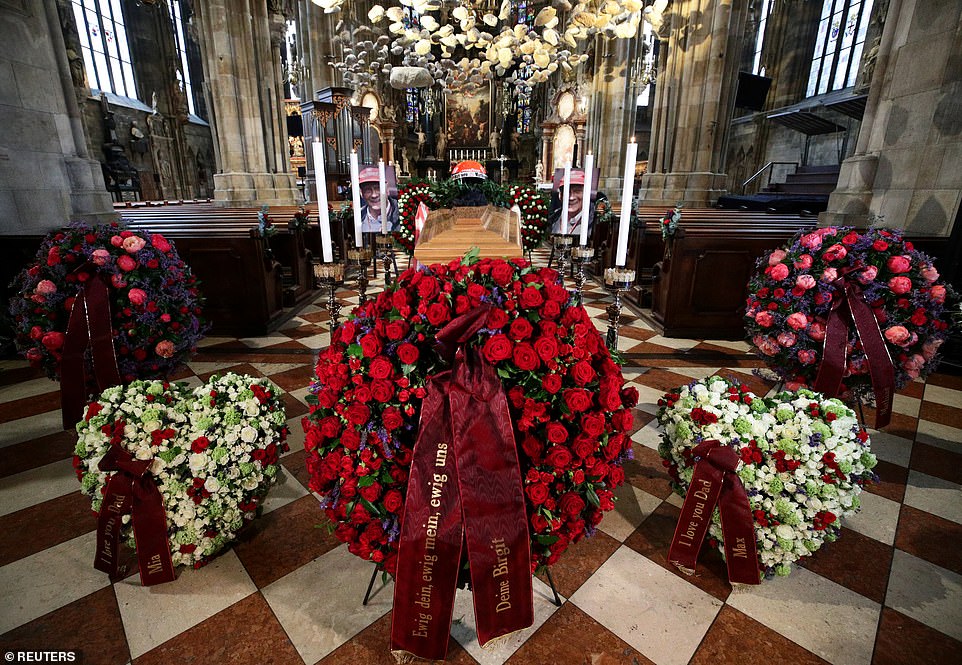 Austrian media have reported Lewis Hamilton will attend, together with other Formula One heavyweights such as Bernie Ecclestone and Mercedes chief Toto Wolff, to mourn Lauda, who won the drivers’ world championship in 1975 and 1977 with Ferrari and in 1984 with McLaren 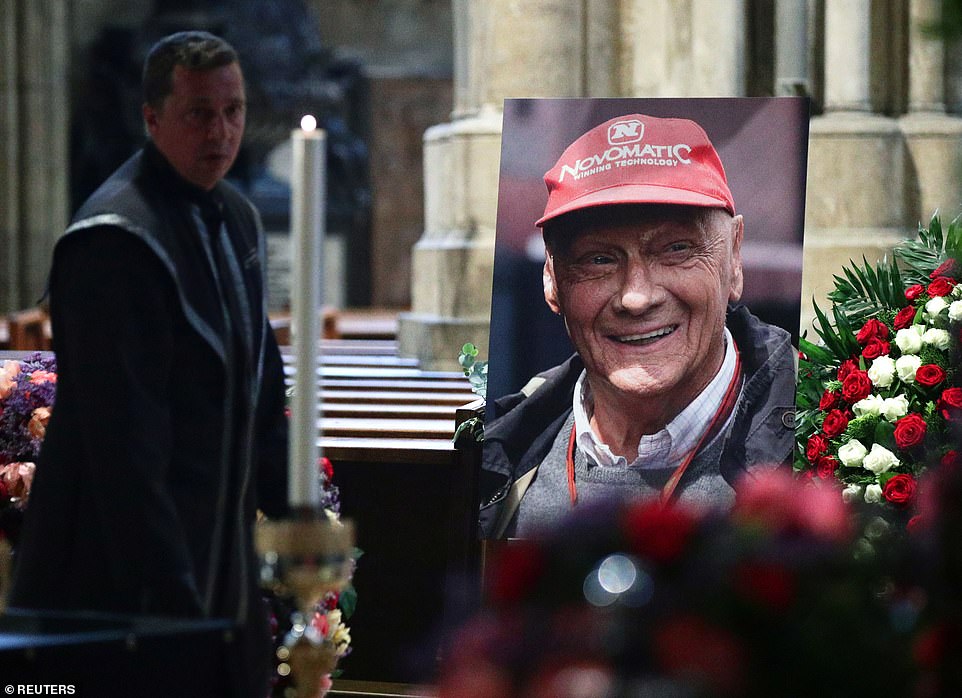 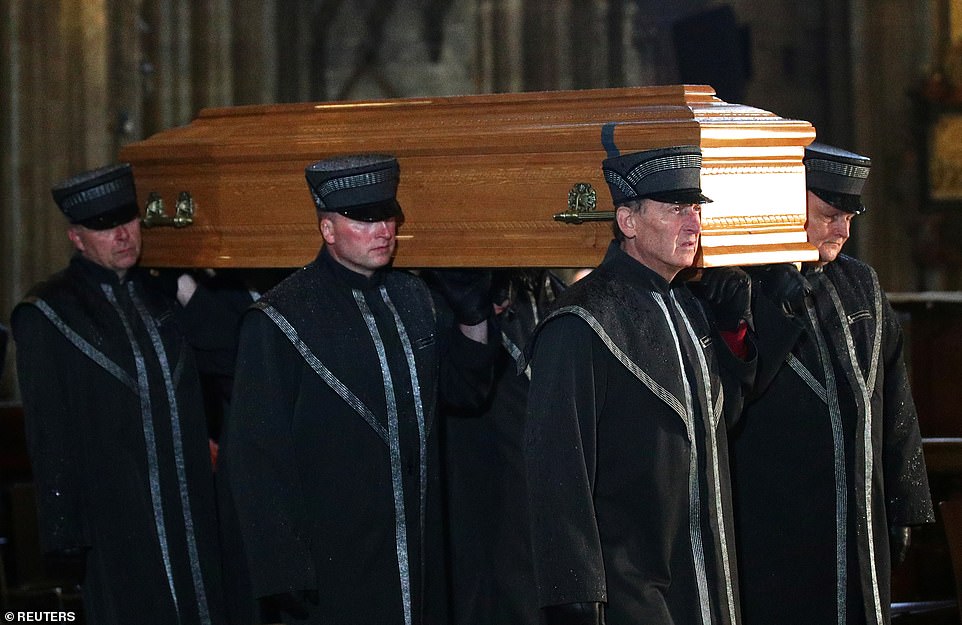 Wednesday’s ceremony was the first time a sports star has been laid out in the cathedral, an honour previously accorded to prominent personalities such the archbishop of Vienna, Cardinal Franz Koenig, and the former crown prince of the Austrian-Hungarian empire, Otto von Habsburg 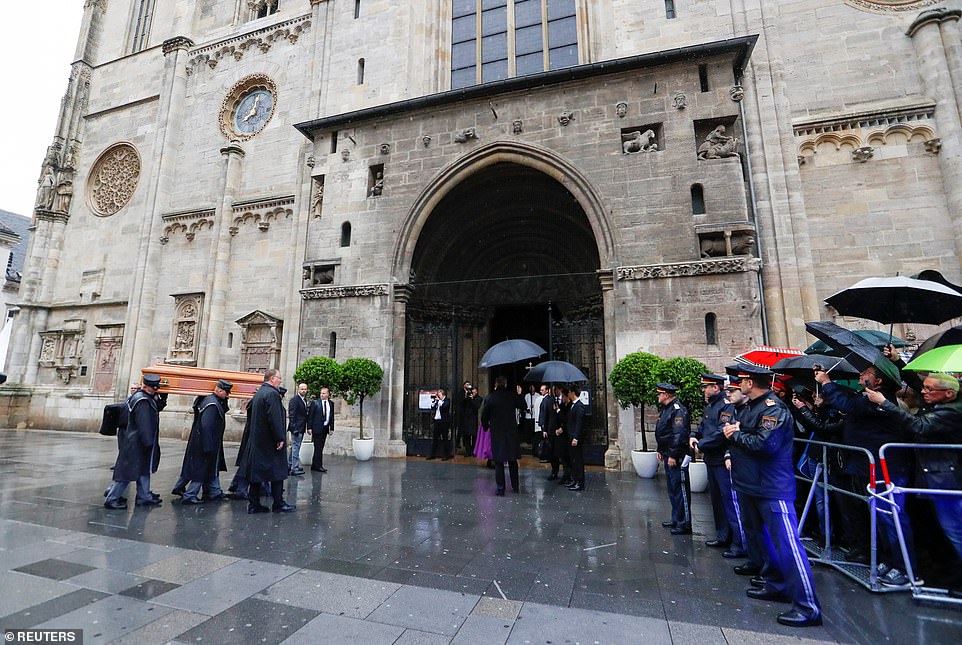 Even after retiring as a race driver, the Austrian remained a fixture on the circuit. Most recently, as non-executive chairman at Mercedes F1 since 2012, he was instrumental in bringing in Hamilton, sparking a run of success for the team 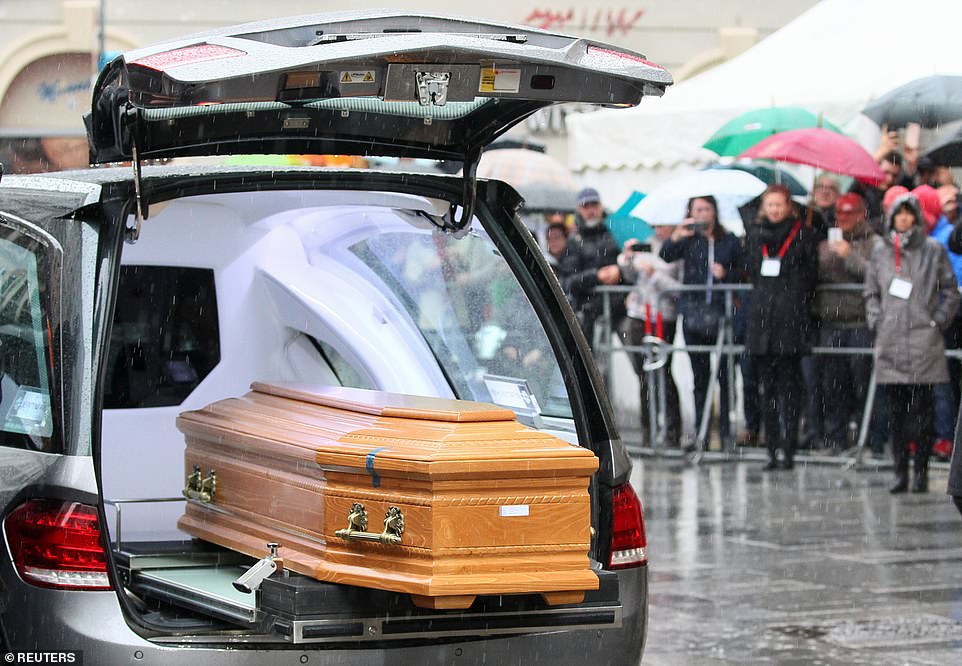 In all, some 300 VIP guests are expected to attend the mass Wednesday, with 800 further seats and 3,000 standing places open to the general public