Hundreds of Donald Trump supporters gathered outside in Manhattan on Sunday morning as part of flag-waving convoy to wish the president well as continues his battle with COVID-19 at the Walter Reed Medical Center.

A procession of around 100 vehicles packed Fifth Avenue outside Trump Tower this morning, temporarily bringing traffic to a standstill as dozens of MAGA-supporting motorists honked their horns, cheered and waved ‘Trump 2020’ flags.

Many were clad in Trump 2020 and Make America Great Again attire. Very few opted to wear masks or adhere to social distancing guidelines, despite Trump’s diagnosis.

The gesture of support lasted around an hour and stretched for more than three blocks from 56th Street and beyond 59th Street. 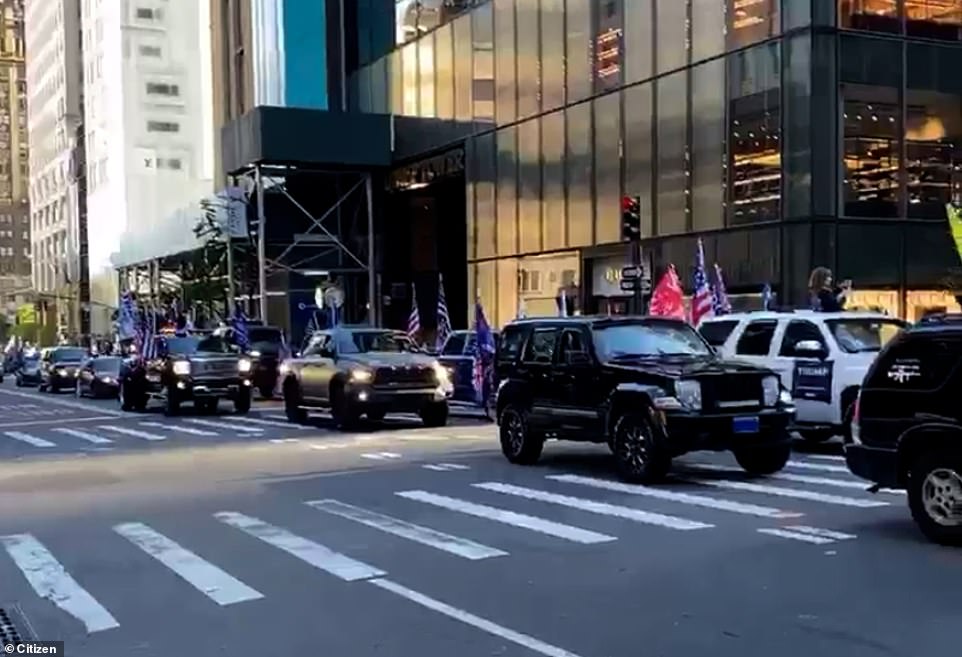 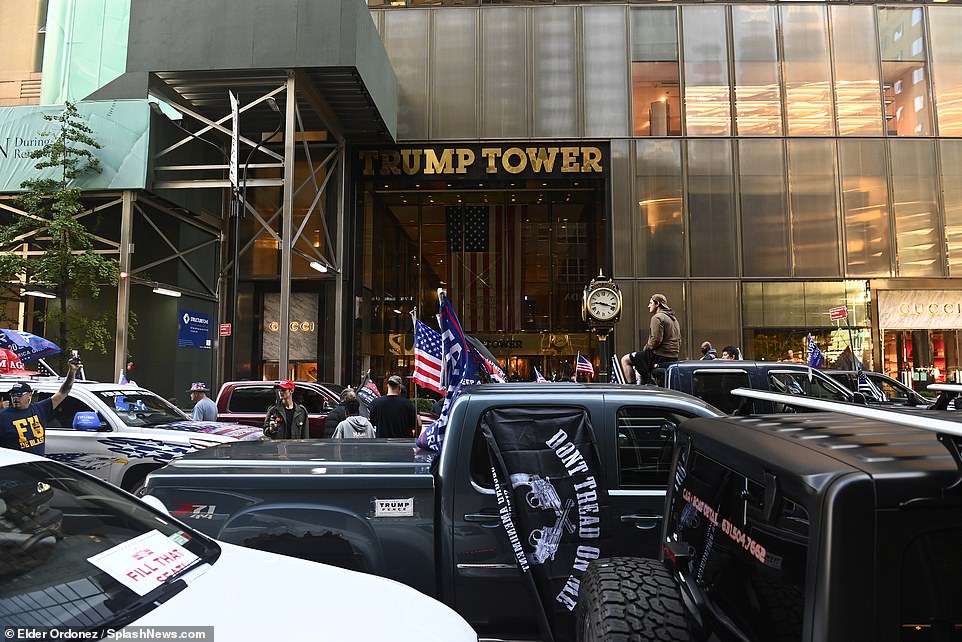 A procession of around 100 vehicles packed Fifth Avenue outside Trump Towers this morning, temporarily bringing traffic to a standstill 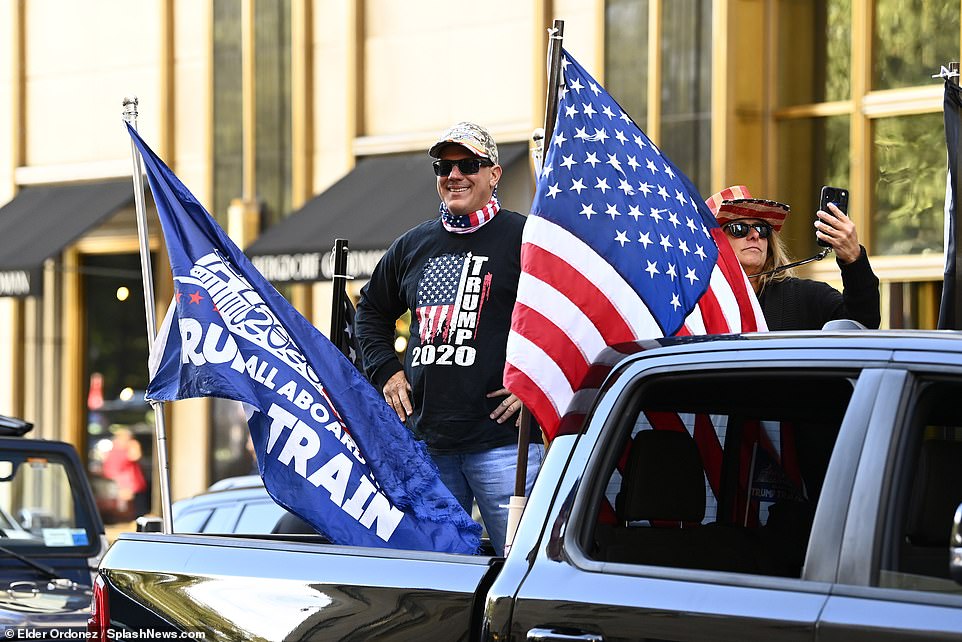 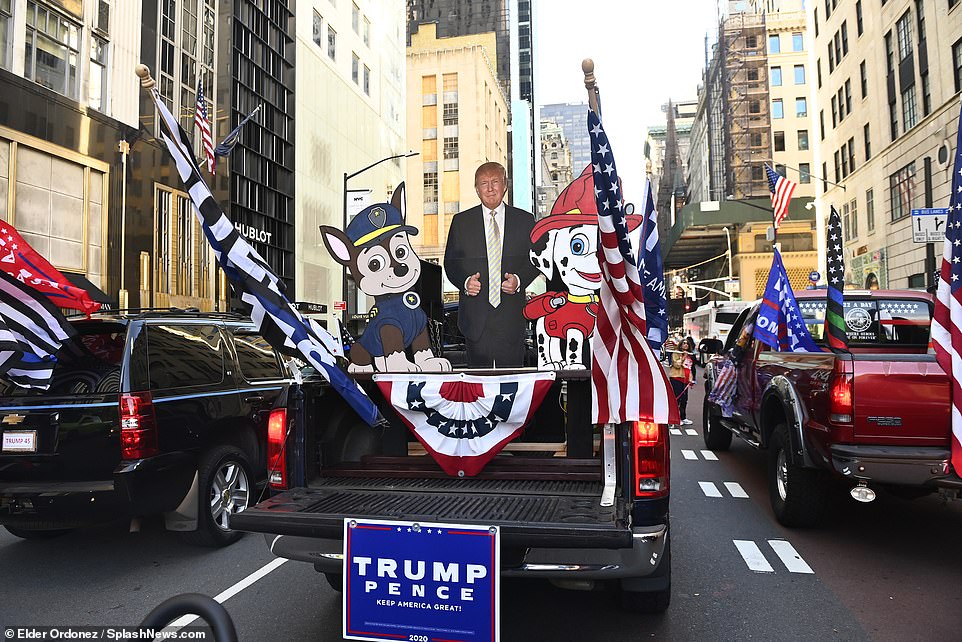 The New York Police Department were present at the scene and no incidents have been reported.

The group said their message is to stand behind President Trump and wish him a speedy recovery. They eventually cleared out and traffic began to move again around 9:45am.

The last several days have proved unpredictable for the Trump administration as they battled both illness and dwindling poll numbers just one month before the contentious November election.

Trump was given supplemental oxygen at the White House Friday morning, before he was transported to the Walter Reed Medical Center that evening, according to The Associated Press, citing a person familiar with Trump’s condition who spoke on the condition of anonymity.

Shortly after, White House Chief of Staff Mark Meadows painted a much starker picture, telling reporters outside the hospital, ‘the president’s vitals over the last 24 hours were very concerning and the next 48 hours will be critical in terms of his care. We’re still not on a clear path to a full recovery.’

In an update Saturday night, Dr. Conley expressed cautious optimism but added that the president was ‘not yet out of the woods.’

Trump provided his own account of his medical condition on Saturday evening, releasing a video of him working from the presidential suite at the hospital in a white button down with no tie and the first button undone.

He said in the video that he is feeling better and will ‘be back soon.’

Sunday’s display follow similar acts of support that happened throughout New York and the rest of the US over the weekend. 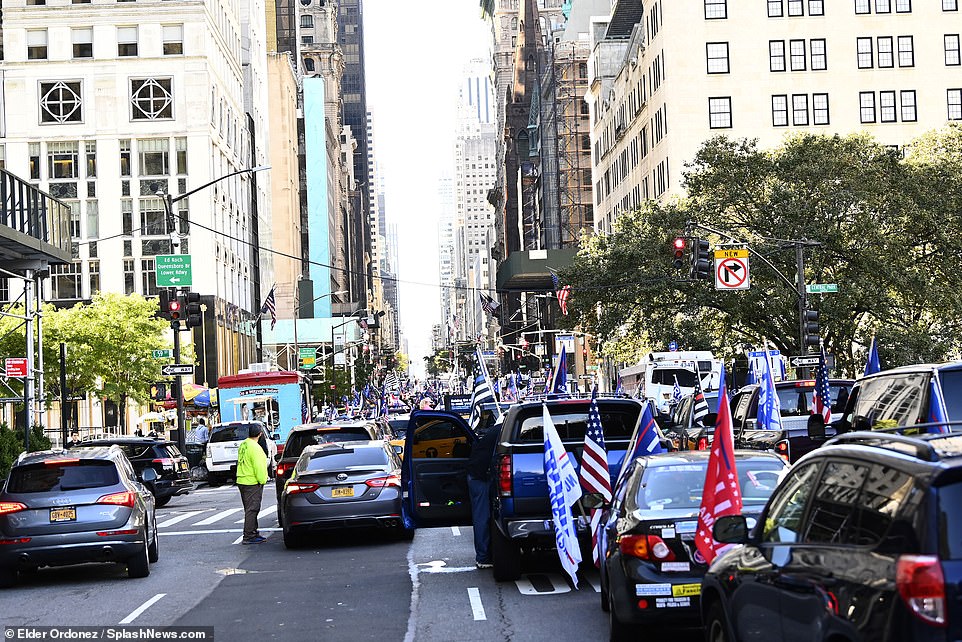 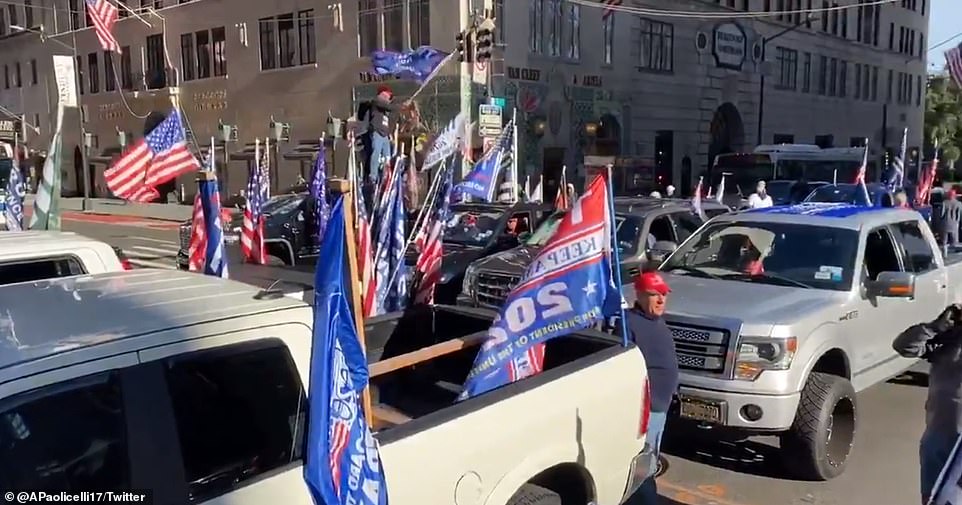 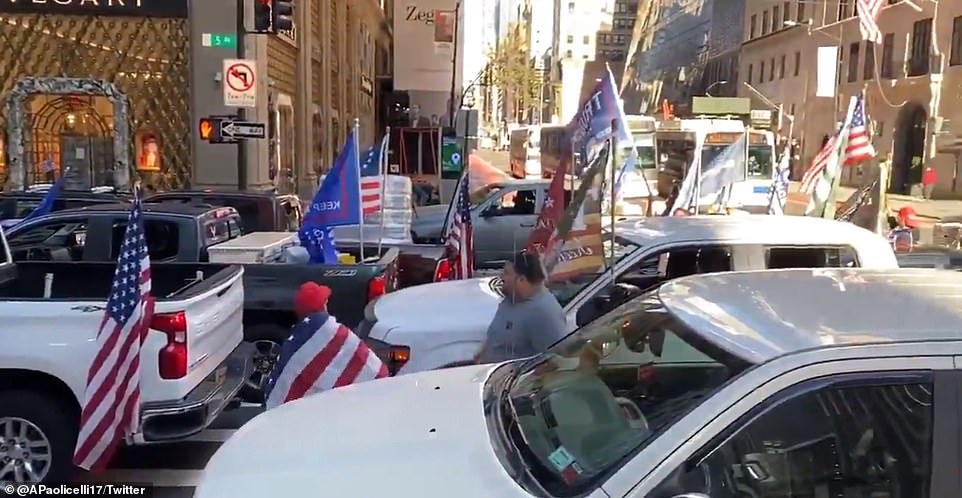 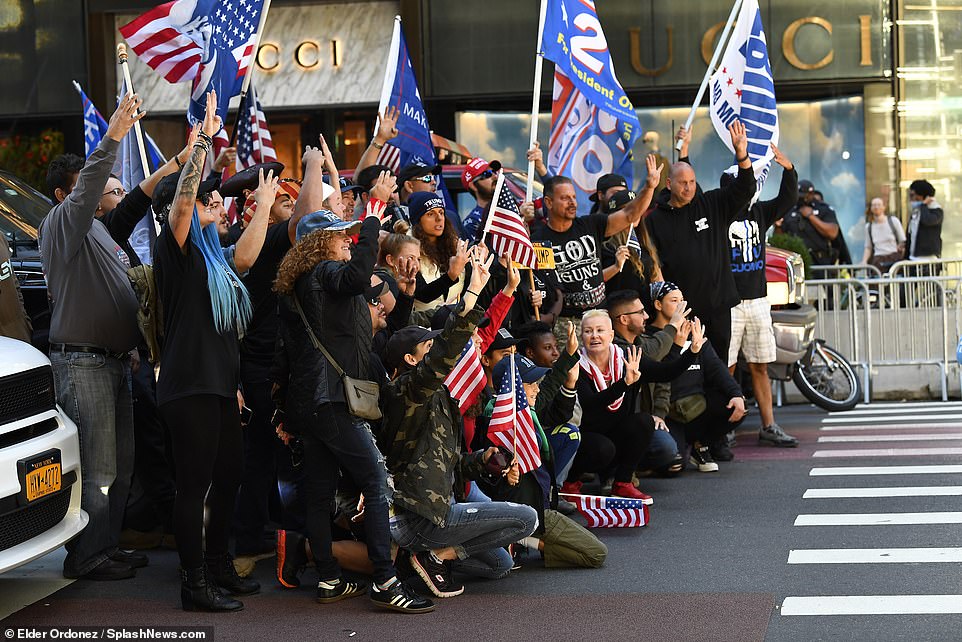 A crowd of maskless Trump supporters are seen huddled closely together in the street, waiving Trump flags 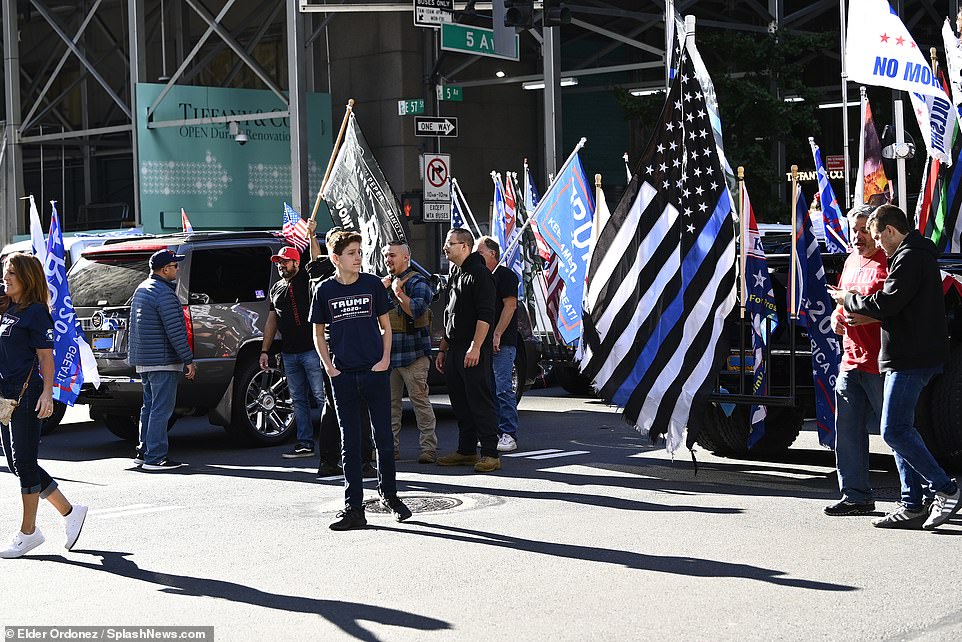 An estimated 2,500 Staten Island residents – many clutching US flags or wearing Trump memorabilia and forgoing face coverings – turned out for a rally in prayer for the President at a Charleston shopping mall on Saturday.

Coming as part of the ‘Triumph Rally’, the jubilant crowd waved flags and chanted the president’s name. A large poster reading, ‘The Fight of the Century: Law and Order vs. Anarchy’ that superimposed the president’s image over Muhammad Ali in the famous photo of his knockout punch during his title defense in Ali-Liston II.

Residents who attended bowed their heads and clasped their hands in prayer for the president.

A small crowd of fervent supporters also banded together outside the Walter Reed Medical Center in Bethesda, Maryland on Saturday, beginning at 9am and lasting late into the evening.

Organized by ‘Women for America First’, the crowd held a prayer vigil for the president that night.

Trump acknowledged footage of the vigil in a tweet on Saturday, writing ‘Thank you so much!’ to his supporters.

The revelation that Trump has coronavirus was not a deterrent for the event organizers.

‘I’m not particularly concerned about us doing peaceful protest of folks here in Staten Island when we saw thousands upon thousands of Black Lives Matter protesters in Prospect Park,’ Brendan Lantry, the head of the Staten Island GOP, told the publication.

‘This event is going to be on a much, much smaller scale than a lot of those riots and protests, and so we’re going to do our best to ensure that people are safe.’ 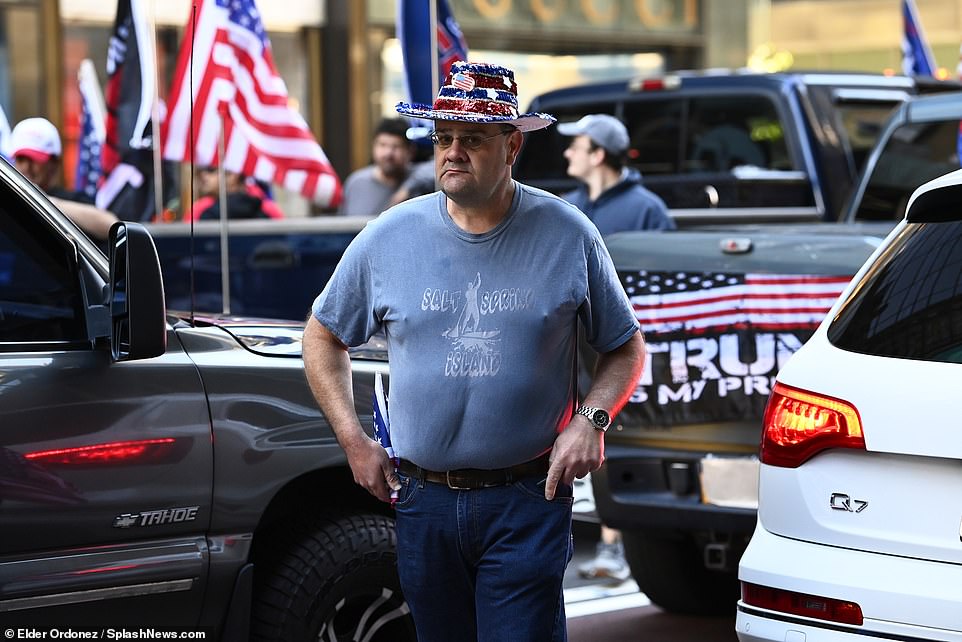 Attendees of the event came from Suffolk County, Long Island and drove into Manhattan on Sunday morning 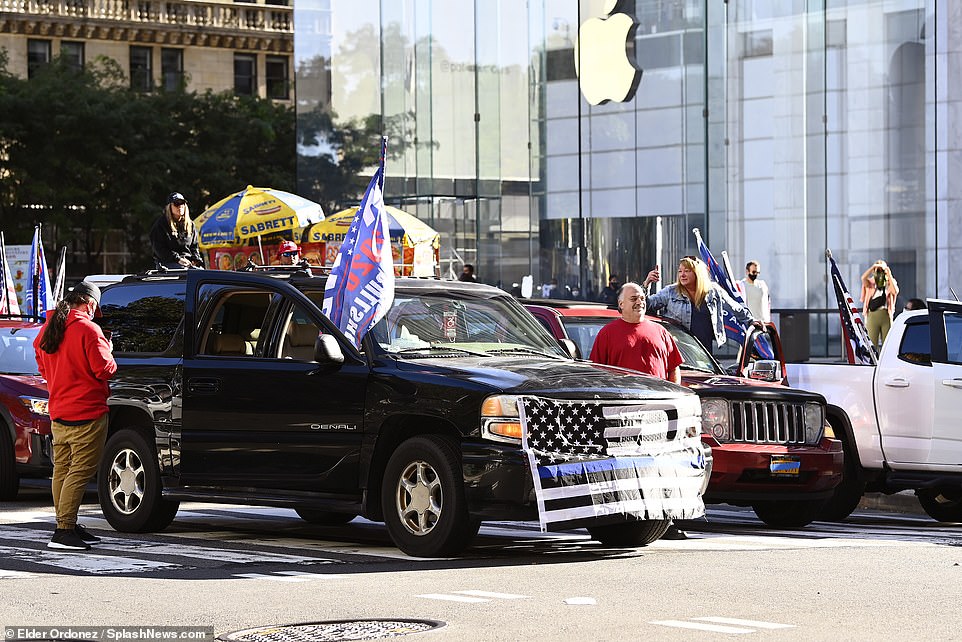 A Thin Blue Line flag is seen hanging from the hood of an SUV, with a Trump 2020 flag displayed next to the windshield 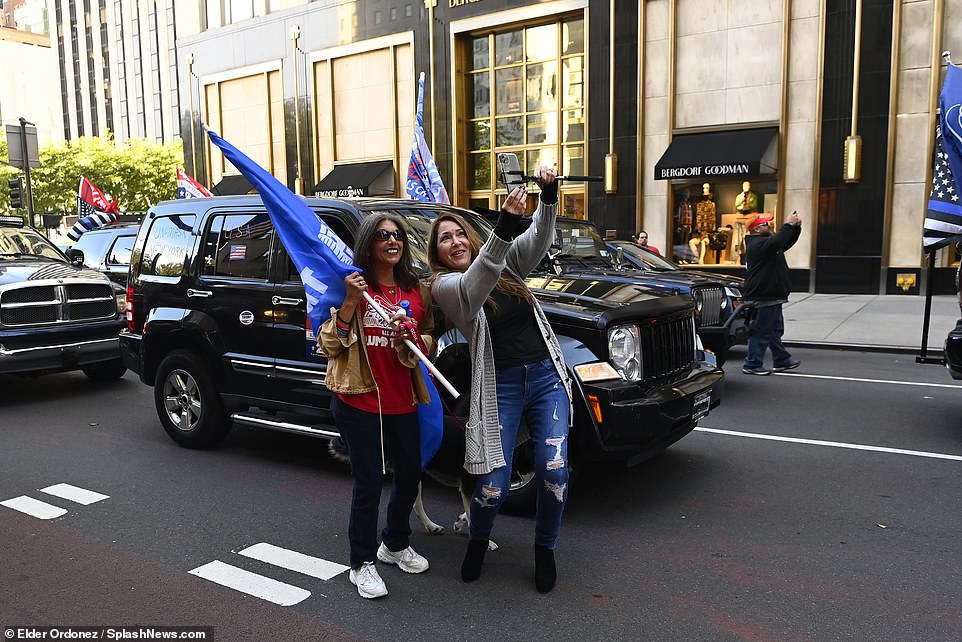 Trump fans pose for selfies in the midst of the event, as a cacophony of horns and chants of ‘four more years blare out’ 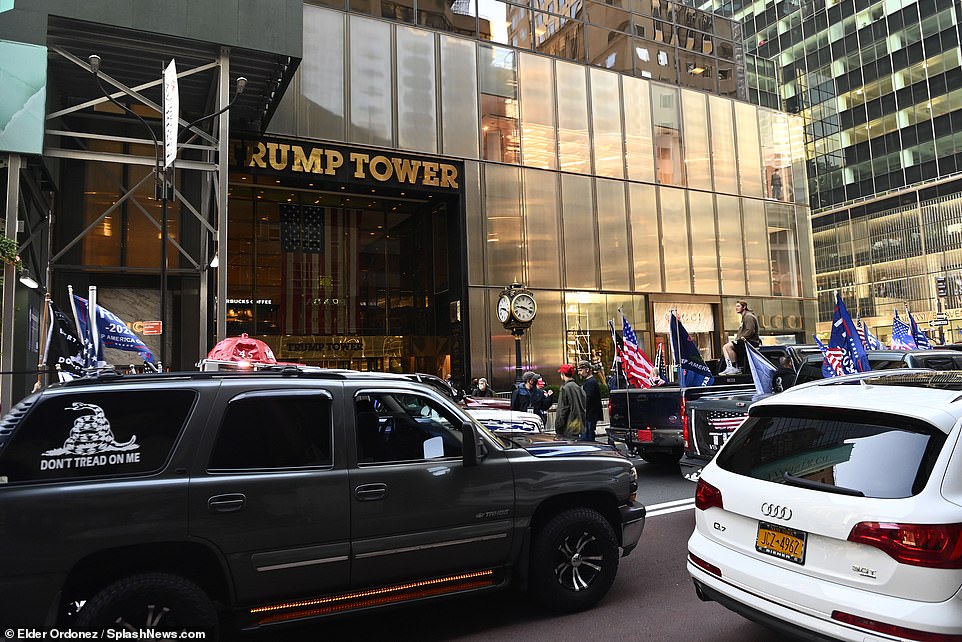 Traffic was gridlocked for around an hour in the area. The NYPD was present and no incidents have so far been reported 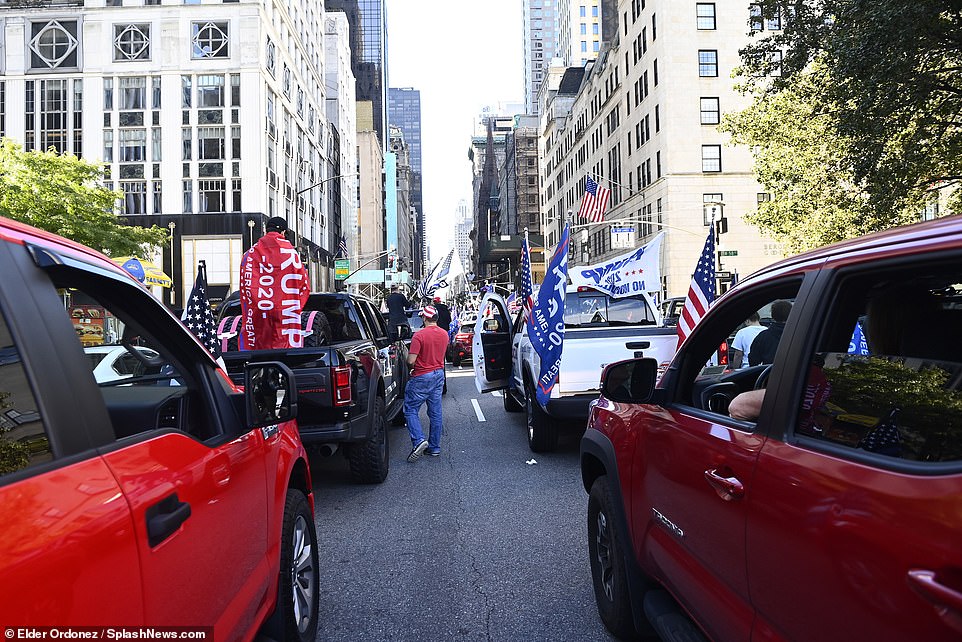 A video shared to Twitter by a member of Trump’s campaign ‘War Room’ showed droves of boats – both big and small – sailing through the waters of Fort Lauderdale.

Photos taken from the shoreline showed boats outfitted with a swath of ‘Make America Great Again’, American and the Thin Blue Line flags clinched atop.

One boat with at least four supporters on it donned a large sculpture of Trump’s head that was mounted on top.

Some banners read ‘Trump 2020: No More Bull****’ and Confederate flags held the phrase ‘Come and take it.’

A super supporter wore a blonde wig resembling Trump’s and waved around a small American flag.

Despite the area receiving a downpour of rain Saturday evening, boats were still spotted out on the waters into the afternoon 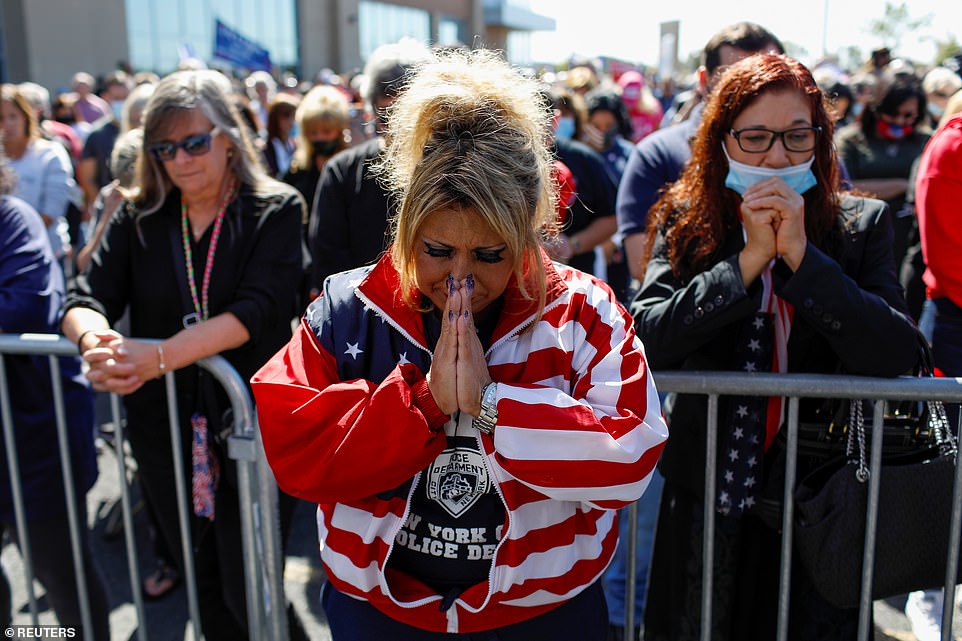 In New York City, people gathered near a Regal Cinema in Staten Island to pray for President Trump after his COVID-19 diagnosis on Saturday 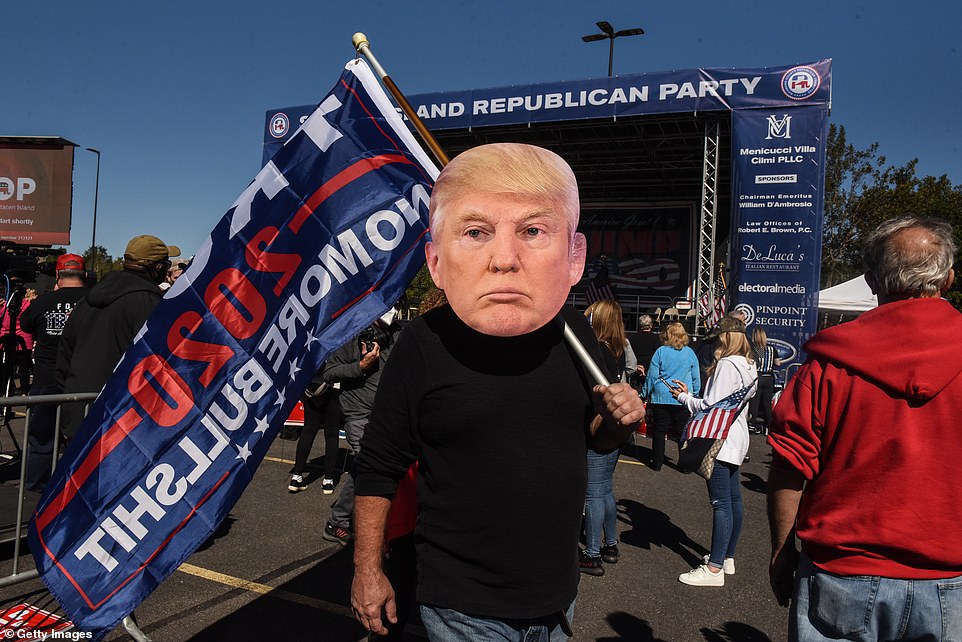 People hold a pro-Trump rally on October 3, 2020 in the borough of Staten Island in New York City that was organized by the Staten Island Republican Party (pictured) 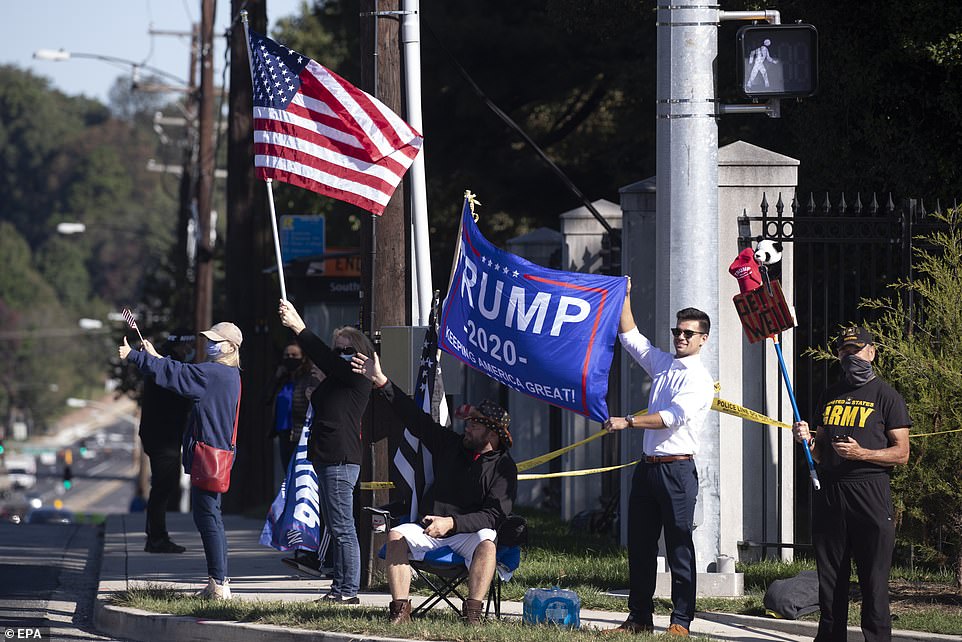 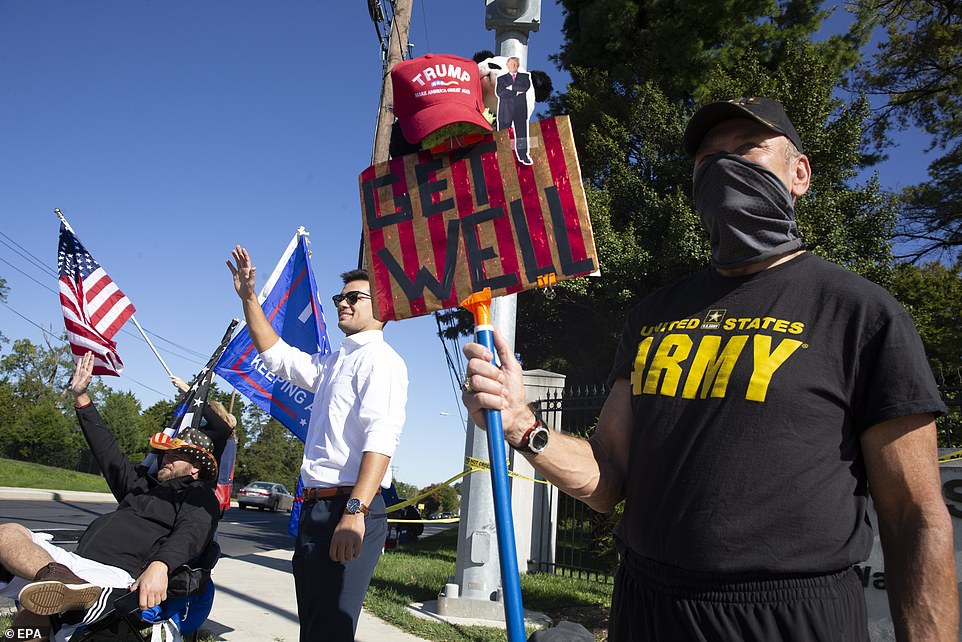 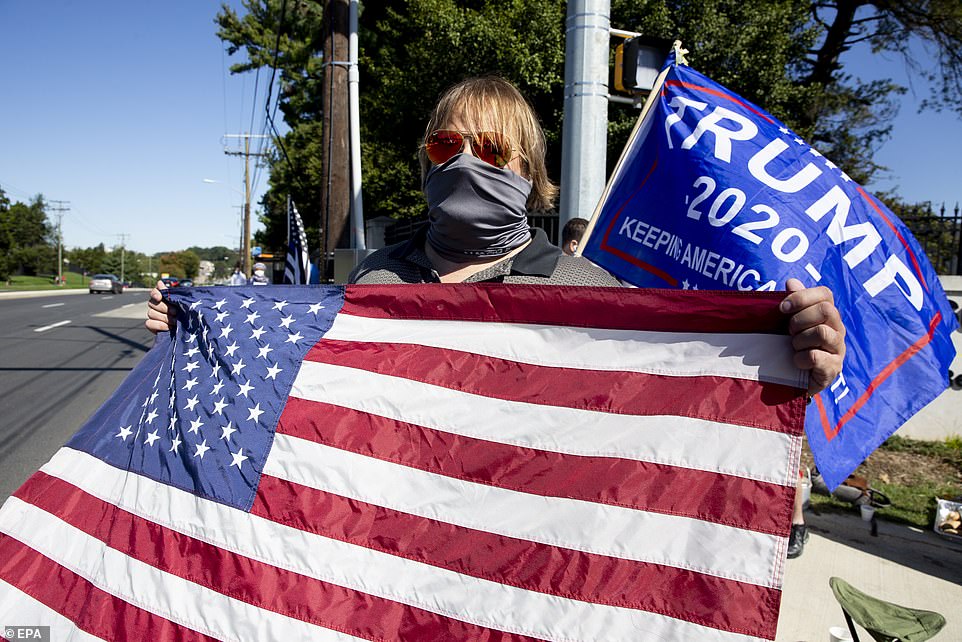 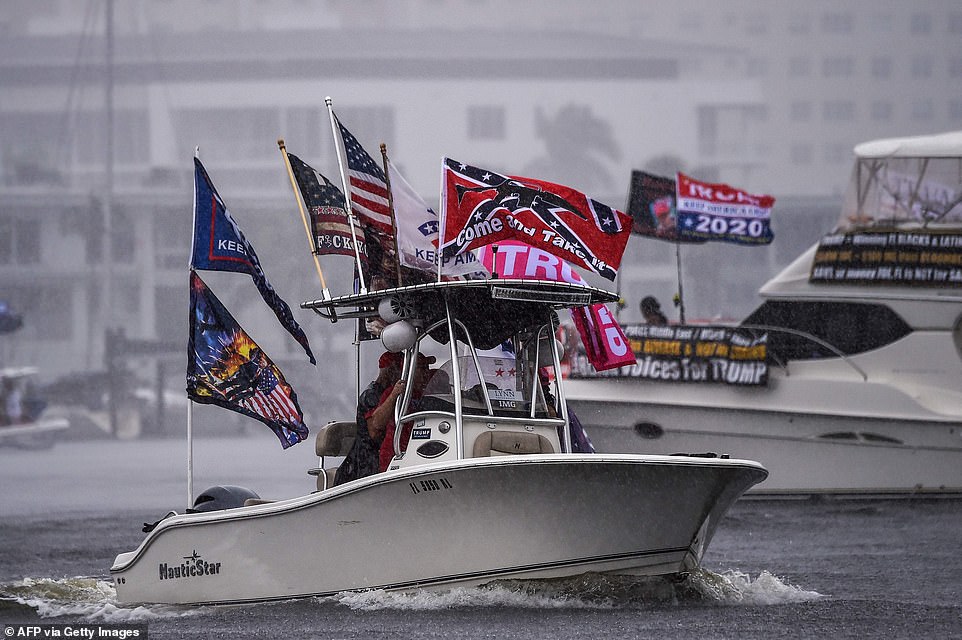 Scores of boats took to the waters of Fort Lauderdale, Florida, where they held a ‘Make American Boats Great Again’ parade in the president’s honor 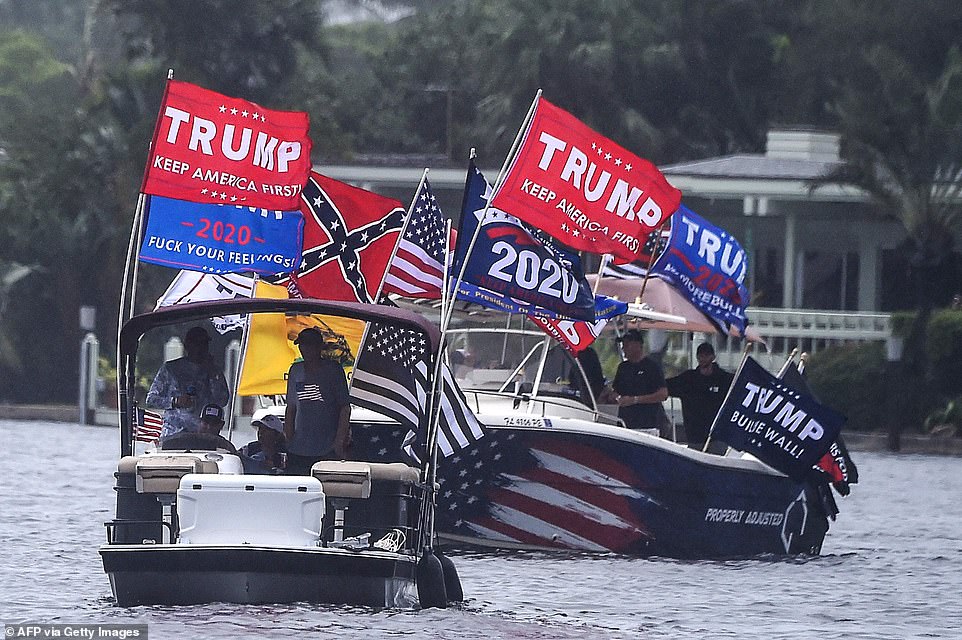 This boat rally followed a series of similar events held in last month across the country as a wave of Trump support took over Labor Day Weekend.

At least nine cities across the country, from California to Georgia and back again, hosted Great American Boat Parade events to herald the current Commander-in-Chief for a second term.

At one held at Lake Travis, Texas, officials said that five boats sank and a flurry of distress calls were made to 911.

And in Ohio, hundreds of fans drove down I-270 through Columbus – two hours away from Cleveland – in support of Trump.

American and Thin Blue Line flags were attached to vehicles as people waved similar flags from atop the overpass.

Authorities confirmed that a shooting took place near the parade, NBC4i reports. The publication reports that one attendee opened fire and the bullet shot through another person’s truck window.

The shooter has not been apprehended by police and the search is ongoing. 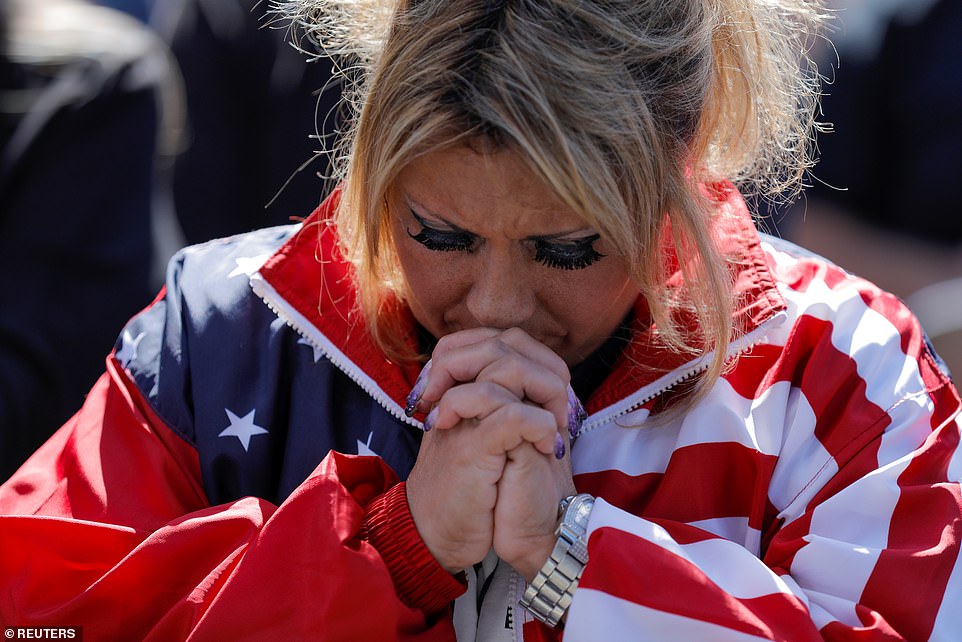 Pictured: Daniela Taomorina of Staten Island participates in a prayer with supporters of U.S. President Donald Trump, who was diagnosed with the coronavirus disease on Saturday 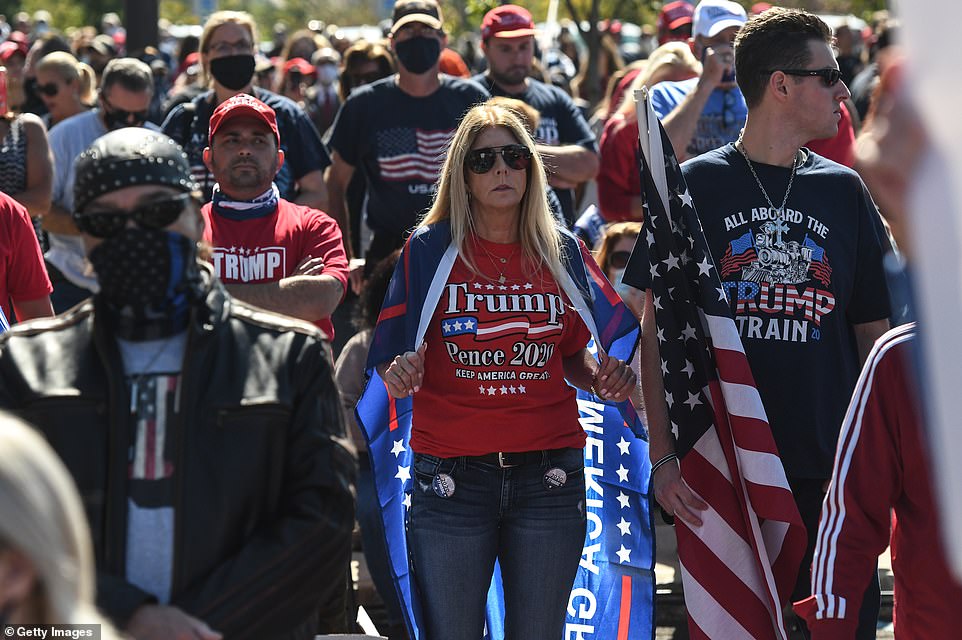 People who attended that Trump rally, organized by the Staten Island Republican Party, wore t-shirts supporting him and Mike Pence for an additional four terms in office 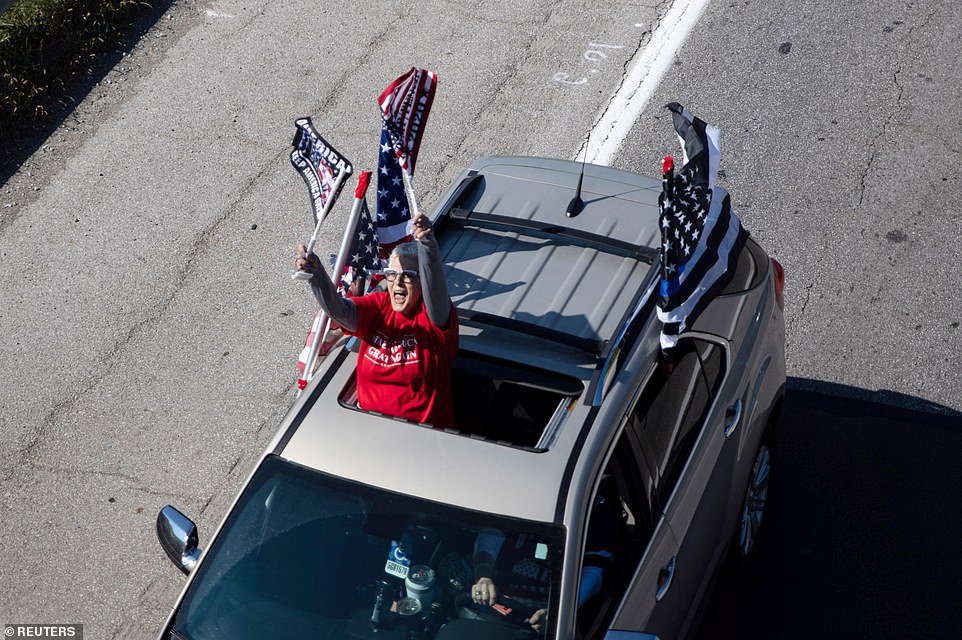 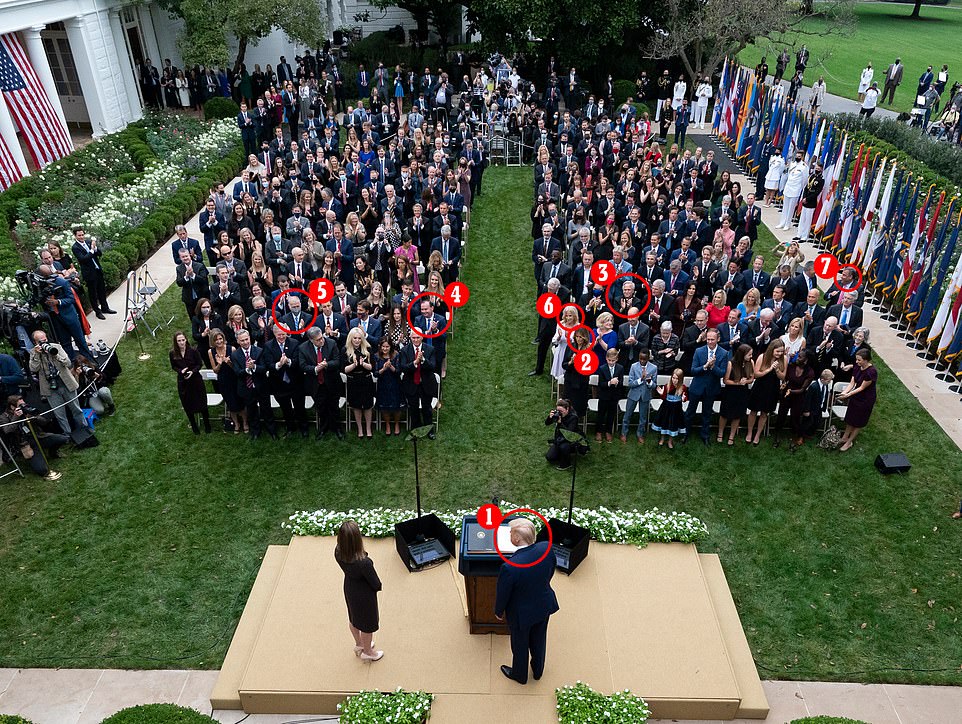 Back in Washington, officials are dealing with the fallout of the coronavirus which has rampaged through Trump’s senior staff since the nomination event for his Supreme Court pick Amy Coney Barret last weekend.

At least nine senior figures who attended ‘superspreader’ event in the White House Rose Garden are now battling the virus.