Hungary and Italy has launched an anti-migration manifesto with the aim of ‘excluding socialists and the left’ in next year’s European parliament elections.

Hungarian nationalist Prime Minister Viktor Orban and Italy’s hardline Interior Minister Matteo Salvini has vowed to work together to try to push for a more hardline approach to immigration within the EU.

The pair cemented their political ties in talks in Milan today, where hundreds gathered to protest their right-wing policies.

Italy’s Interior Minister Matteo Salvini, pictured,  has vowed to work with Hungary to try to push for a more hardline approach to immigration within the EU.

‘We agreed that the most important issue is migration,’ Orban said, praising his own and Salvini’s restricted approach on allowing asylum seekers into their respective countries.

Orban praised far-right Salvini was his ‘hero’ and claimed that ‘the security of Europe depends on his success.’

Salvini said they were working to create a future alliance ‘that excludes socialists and the left, that brings back to the center the values and identity’ that their respective political parties represent.

He said: ‘We are near a historic change on a continental level.’

EU countries are expected to go to the polls in May, and Salvini has aligned himself with the right-wing ‘Visegrad’ countries: the Czech Republic, Poland, Austria and Hungary. Activists protest against the meeting of the Italian Deputy Premier and Interior Minister, Matteo Salvini, and the Hungarian Premier, Viktor Orban in Milan today

‘At the heart of the talks between the two prime ministers was a safer and fairer Europe as a common objective to work towards … beginning with the key issues for European citizens: the fight against illegal migration, growth and work, and socio-economic stability,’ a government statement said.

Salvini has repeatedly shot barbs at the EU ver immigration, accusing the bloc of having abandoned Italy as it struggles to deal with the hundreds of thousands of migrants who have arrived on its shores since 2013.

His antagonistic stance has drawn support from key figures of Europe’s hard-right including Marine Le Pen and Orban, and critique from the centre and left, including French President Emmanuel Macron.

Macron has sharply criticised countries who refuse to cooperate on migration saying those who benefit from the EU but ‘claim national self-interest when it comes to the issue of migrants’ should have sanctions imposed on them.

Tuesday’s meeting in Milan came just days after Italy’s latest standoff with Brussels over immigration, which led to scores of migrants being held on a coastguard boat moored in Sicily for days until a relocation deal was struck enabling them to disembark on Sunday.

Salvini said he would continue to refuse NGO ships with migrants access to Italian ports, and brushed off an investigation into ‘abduction’ launched against him by prosecutors in Sicily.

‘They won’t make me take one step backwards,’ he said. 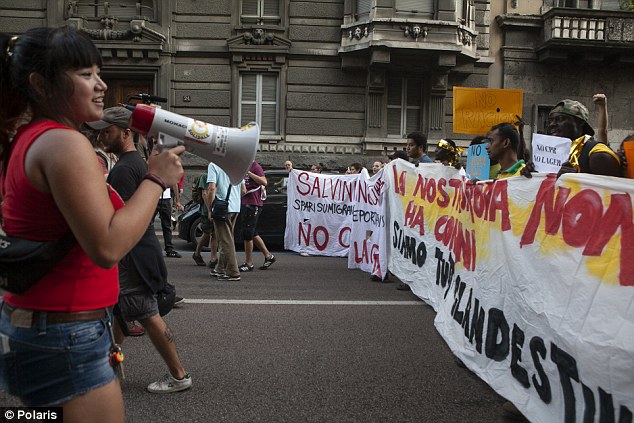 Orban told reporters that he would not allow migrants to enter Hungary, and insisted that help should be ‘taken to where people are in trouble, rather than bring trouble to us’.

‘We need a new European Commission that is committed to defence of Europe’s borders,’ he said.

Migration is a hot-button issue in Italy. According to a study carried out by research body Instituto Cattaneo, 70 per cent of Italians believe that the percentage of non-EU immigrants among Italy’s population of 60.5 million is nearly four times that recorded by Eurostat – seven percent as of the start of 2017.

His fellow Deputy PM and Five Star leader Luigi Di Maio has stood alongside Salvini in opposition to Europe’s handling of migration from Libya.

Last week he threatened to pull Italy’s EU budget contributions if more help didn’t arrive and backed Salvini as he waited for nearly a week before allowing 140 migrants to disembark a coastguard ship docked at the Sicilian port of Catania.

But Five Star includes within its broad political ranks a left-wing faction uncomfortable with the party’s alliance with Salvini.

Di Maio blasted Orban on Monday for putting up ‘barbed-wire barriers’ and refusing to do his part to help with migrants.

‘As far as I’m concerned countries that refuse allocation of migrants should not be entitled to European funding,’ Di Maio said in an interview in daily La Stampa.