Jeremy Hunt today admitted family doctors are leaving the profession because they are feeling ‘knackered’ and overworked.

He said the controversial ten-minute appointments have left many GPs feeling like they are stuck on a ‘hamster wheel’.

The Health Secretary made the comments as he unveiled a slew of financial incentives designed to keep doctors in the profession.

Speaking at the Royal College of GPs annual conference in Liverpool today, he said: ‘Too many of the GPs I meet are knackered, they are often feeling at the end of their tether.

Health Secretary Jeremy Hunt, pictured at the Royal Liverpool University Hospital in Liverpool today, admitted doctors are leaving the profession because they are knackered

‘They feel that they’re on a hamster wheel of 10 minute appointments, 30 to 40 every day, seem never ending.

‘They don’t feel able to give the care that they would like to to their patients and increasing numbers of them are choosing to work part-time and at worst to leave the profession.

‘We have to think really hard about how to stop that happening if we’re going to use the magic of general practice to do what we need it to do for the NHS.’

He told GPs there was no ‘silver bullet’ to the problems facing them but the Government was ‘absolutely committed’ to increasing funding and capacity.

But he faced a tough  grilling from delegates who confronted the Cabinet minister over the pressures frontline doctors are facing.

One delegate told him two primary care workers in a peer support group she was involved in had committed suicide. 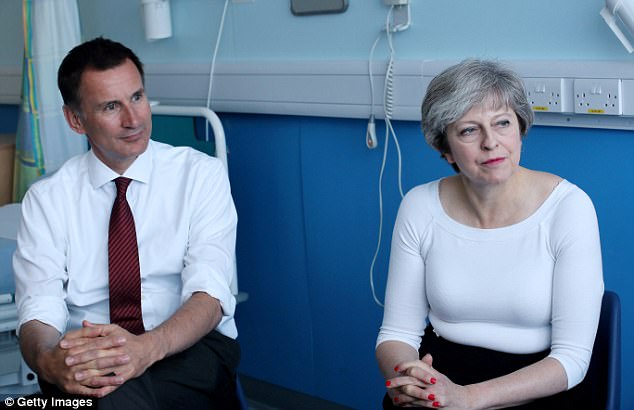 Jeremy Hunt and Theresa May, pictured speaking to patients in Liverpool today. Mr Hunt today unveiled a series of financial incentives to keep GPs in the profession 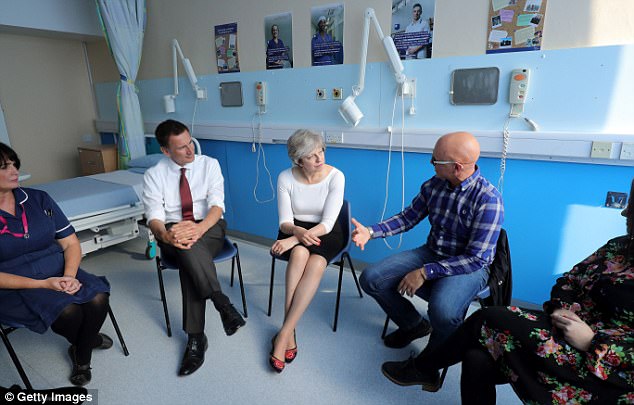 The PM and her Cabinet minister, pictured in Liverpool today,  said they are determined to try to stem the departure of GPs from Britain’s doctors surgeries

Another urged him to acknowledge ‘how bad the situation is’ and asked for more cash to be pumped into the NHS.

Mr Hunt said: ‘I did not say when I was here before that we were going to solve these problems overnight.’

He told the conference that GPs a £20,000 ‘golden hello’ if they move to priority areas where there are a shortage of doctors.

The bonuses – on top of starting salaries of up to £45,000 – are part of an attempt to stem the growing GP crisis.

The incentives have been unveiled amid a staffing crisis which is helping drive up waiting times by 15 per cent a year.

He also pledged to fast-track applications of doctors from outside Europe – particularly Australia – in an attempt to recruit 2,000 foreign GPs.