A manhunt is underway for two heartless thieves who robbed a wheelchair-bound man moments after he withdrew cash from an ATM machine.

The man, 42, who has cerebral palsy, noticed two men loitering near an ATM in Haymarket, at the southern end of Sydney’s CBD, on Sunday morning.

CCTV footage showed the men whispering after he wheeled into the the enclosed entrance of the busy ANZ branch on George street.

The pair waited for him to finish his transaction before one snatched the cash out of his hands.

They immediately left the branch and were last seen running along George Street.

Two men (pictured) robbed a man, 42, with cerebral palsy who is confined to a wheelchair after he withdrew cash from an ATM in Haymarket, in Sydney city, on Sunday morning

Witnesses helped the wheelchair-bound man, who was not injured, and called police.

NSW Police released images from the incident and appealed for public assistance to help identify the two men.

The first man wore a black jacket and dark green pants and was described as being of Caucasian appearance, with a large build and red hair.

The second man was described as having a medium build, Caucasian appearance and light-brown short hair with a dark blue jacket and dark pants.

Police would also like to speak to a man and woman of Asian appearance who assisted the wheelchair-bound man. 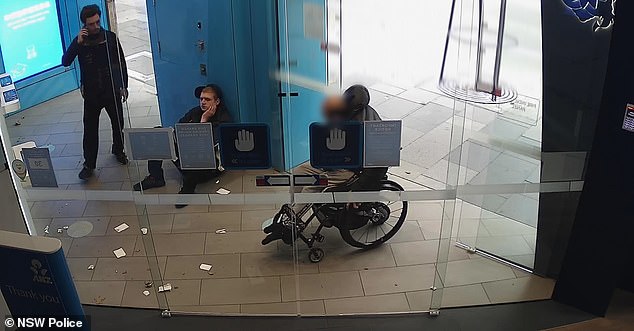 Pictured: NSW Police released images from the robbery and called for public assistance in helping to identify the two men