Hawaii prepared for the onslaught of Hurricane Douglas on Sunday, with predictions of high winds, rain and storm surge.

Rainfall from the storm will be anywhere from 5 to 15 inches.

It’s ‘probably not a good day to go to the beach,’ Almanza said.

Douglas weakened Saturday to a Category 1 hurricane as it approached Hawaii, but officials warned people should not be lulled into complacency. 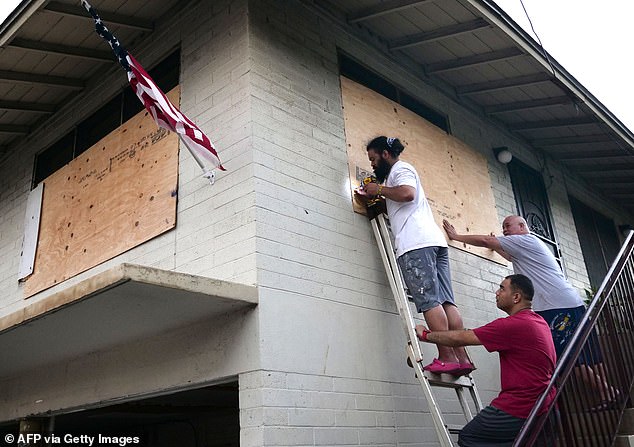 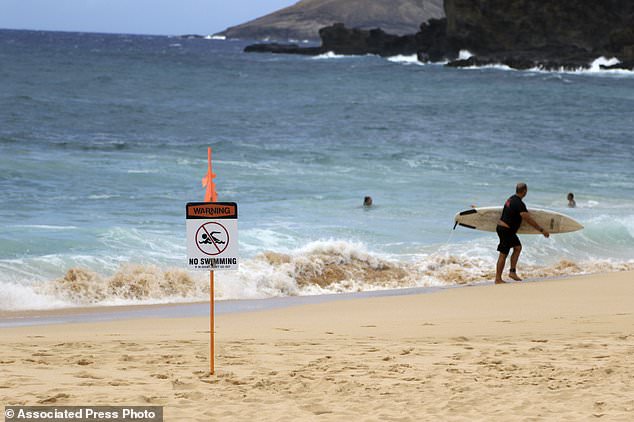 The National Weather Service said Douglas should remain a hurricane as it moves through the islands Sunday.

‘Douglas is continuing a gradual, slow, weakening trend, which in itself is good news, but the bad news is that this hurricane is going to come very close to the islands even as it´s weakening,’ said Robert Ballard, the science and operations officer at the Central Pacific Hurricane Center.

‘And we do expect significant impacts as it makes its point of closest approach or possible landfall as it comes through.’

Oahu, home to the state’s largest city, Honolulu, was placed under a hurricane warning with the storm beginning to impact the island as early as late morning.

Kauai and Maui were also placed under warning status Sunday, while a hurricane watch was canceled for the Big Island.

Maximum sustained winds decreased to about 90 mph Saturday and remained at that level Sunday.

‘We know that it is weakening as it approaches, but it still will have significant impact on each island,’ Hawaii Governor David Ige said at a news conference.

State health department officials contacted each of the 625 people who were currently in isolation or quarantine as of Friday because they are either COVID-19 positive or have been in contact with someone who is. 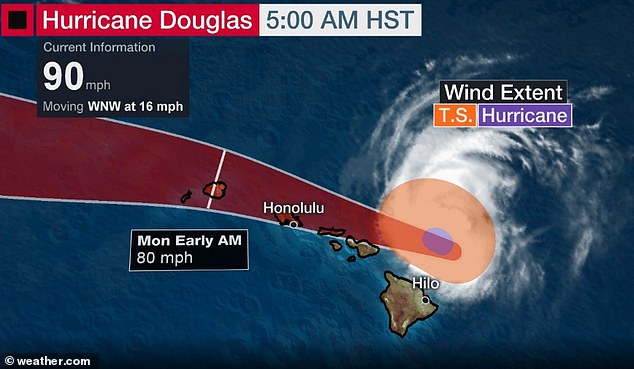 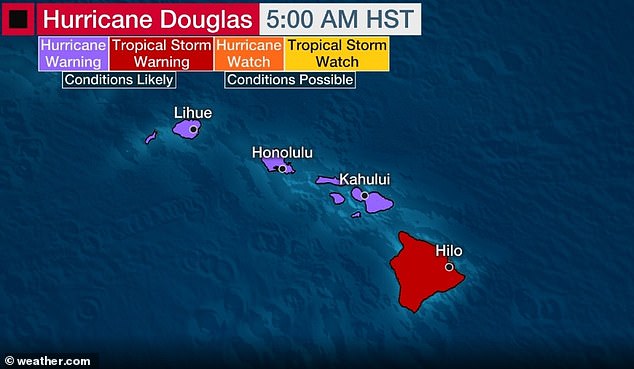 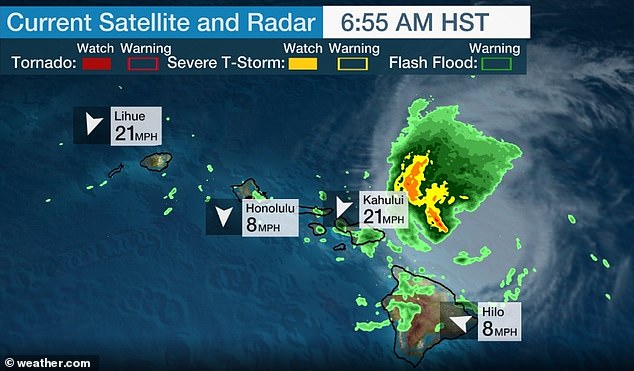 The storm is likely to bring up to 15 inches of rain to Hawaii, according to meteorologists 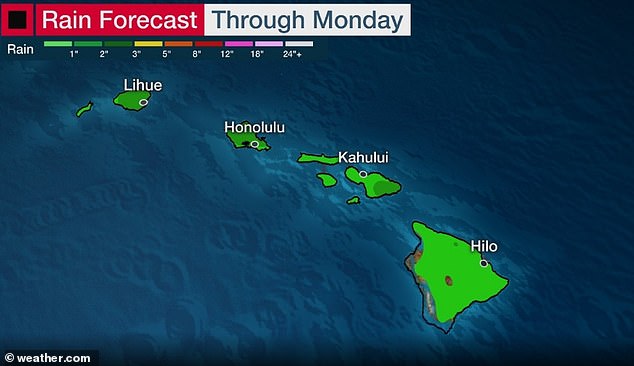 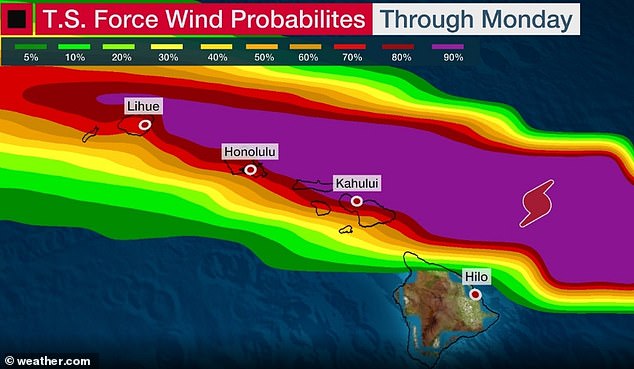 Every one of those indicated they would shelter-in-place and not seek refuge at a hurricane shelter.

Hawaii has some of the lowest coronavirus infection rates in the nation, but COVID-19 numbers have been rising in recent weeks.

Every day since Thursday, Hawaii has reported record highs of newly confirmed cases, including 73 on Saturday.

Caldwell said at the same news conference that 13 shelters were to open at 9am on Sunday around Oahu, well ahead of the hurricane impacting the island, anywhere from midday into the evening.

The storm was about 235 miles east of Honolulu early Sunday, moving west-northwest at 16 mph.

President Donald Trump issued an emergency declaration for Hawaii because of the hurricane, directing federal assistance to supplement state and local response efforts.

Hawaiian Airlines canceled all Sunday flights between Hawaii and the US mainland and also between the other islands.

Ige said residents should already have their 14-day emergency supply kit in place, but because of COVID-19, he encouraged people to add masks, hand sanitizer and sanitizing wipes.

‘Just make sure I had enough food, you know, enough extra water, which I usually do anyway, so that´s about it,’ he said.

‘Not expecting too much trouble from this one.’ 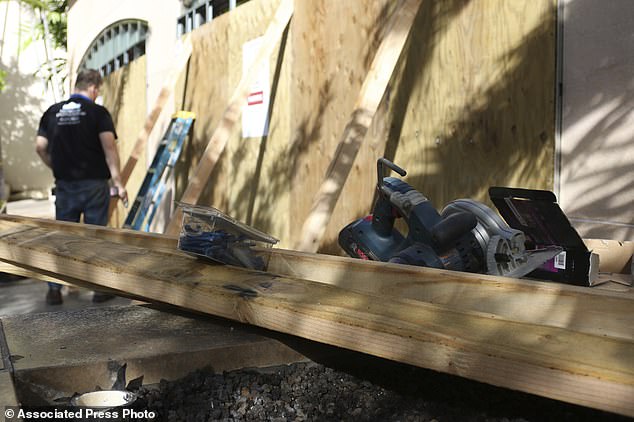 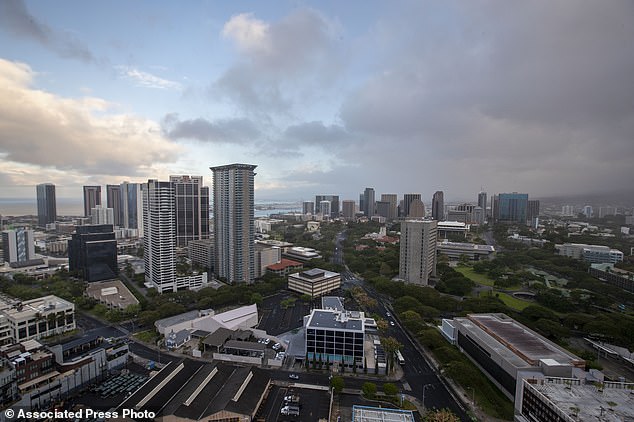 A morning view of the city of Honolulu on the island of Oahu, is seen on Sunday