Hurricane Maria killed 2,975 people in Puerto Rico, according to the results of a long-awaited independent investigation commissioned by the government of the US island territory.

After nearly a year of controversy over the true toll of the September 2017 monster storm, the governor of Puerto Rico said the new estimate would now be considered the official death toll.

US President Donald Trump previously described Puerto Rico’s death toll as not ‘a real catastrophe like Katrina’ when he witnessed the devastation for himself.

In comparison, the death toll from 2005’s Hurricane Katrina – the costliest hurricane in US history – was far lower, and estimated at 1,833.

‘I’m giving an order to update the official number of deaths to 2,975,’ Governor Ricardo Rossello said at a press conference.

‘Although this is an estimate, it has a scientific basis.’

Destroyed buildings are viewed from the air during recovery efforts four weeks after Hurricane Maria struck on October 18, 2017 in-flight over Puerto Rico The destroyed Perez family house is seen , in Juana Matos, Catano, Puerto Rico, on October 4, 2017, two weeks after the passage of the Hurricane Maria 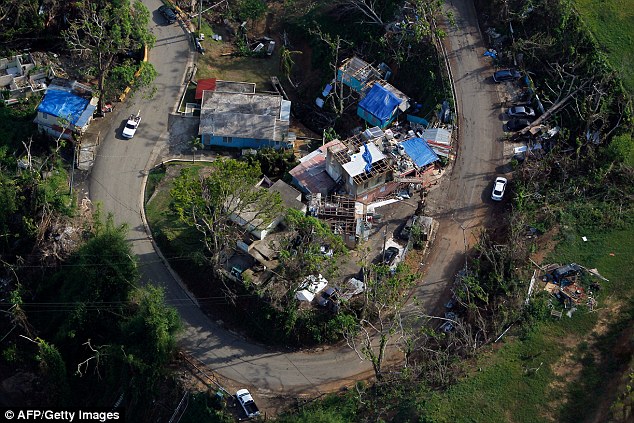 An aerial view of houses affected by the passing of Hurricane Maria in Naranjito, Puerto Rico, October 23, 2017 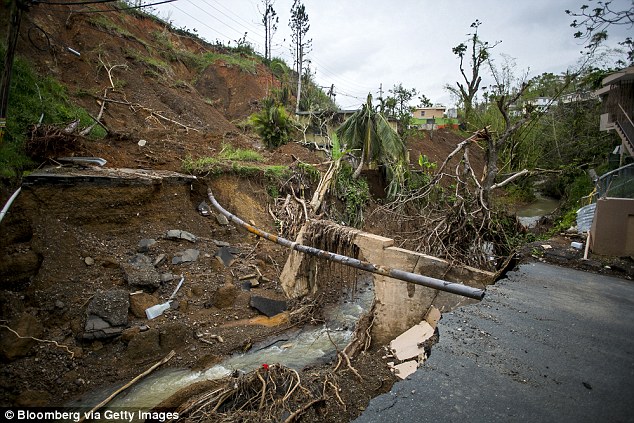 The area where a bridge once stood before Hurricane Maria is seen along Highway 152 in Barranquitas, Puerto Rico, on Wednesday, Oct. 18, 2017

It is ranked as the third costliest cyclone in the United States since 1900.

The Puerto Rican government’s longstanding official death toll from Maria had been just 64.

To get a more accurate assessment, Rossello commissioned the independent study from George Washington University (GWU).

The study tracked excess deaths related to Hurricane Maria from September 2017 to February 2018, and found the toll was 22 percent higher than the number of deaths that would have been expected during that period in an average year, without such a deadly a hurricane. 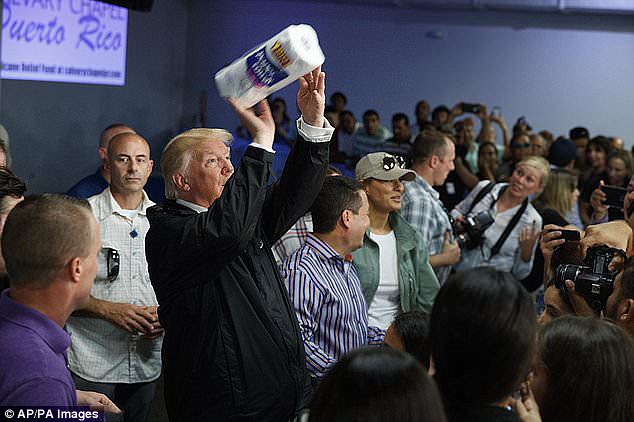 President Donald Trump tosses paper towels into a crowd as he hands out supplies at Calvary Chapel, Tuesday, Oct. 3, 2017, in Guaynabo, Puerto Rico 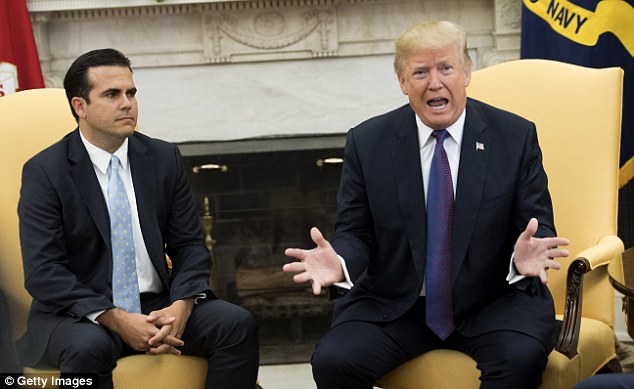 Trump speaks with Governor Ricardo Rossello of Puerto Rico during a meeting in the Oval Office at the White House on October 19, 2017 in Washington, D.C. Trump and Rossello spoke about the continuing recovery efforts following Hurricane Maria

‘The results of our epidemiological study suggest that, tragically, Hurricane Maria led to a large number of excess deaths throughout the island,’ said principal investigator Carlos Santos-Burgoa, a GWU professor of global health.

‘Certain groups – those in lower income areas and the elderly – faced the highest risk.’

A separate study by Harvard University earlier this year estimated that around 4,600 people had died in the three months following the storm.

Authors of the latest report described it as ‘the most rigorous study of excess mortality due to the hurricane done to date.’

It analyzed death certificates and other mortality data for six months from September 2017 through February 2018.

Excess deaths were estimated with the help of mathematical modeling that compared post-hurricane deaths to the expected number based on historical patterns, and adjusted for age, sex and migration from the island. 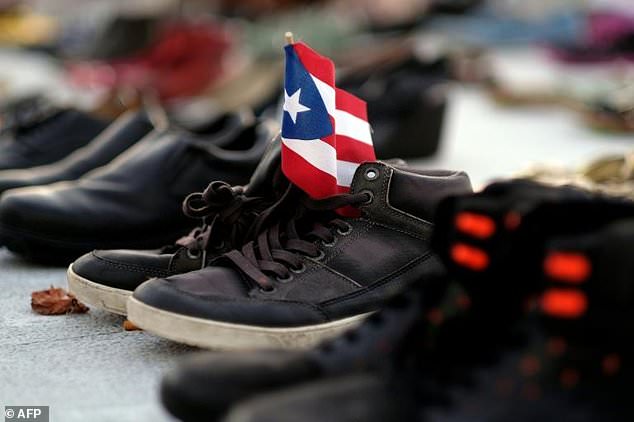 The team also identified flaws in the system that may have led to underreporting deaths previously, including lack of communication and poor training for doctors on how to certify deaths in disasters.

Rossello told El Nueva Dia newspaper that the findings, ‘in my opinion, demonstrate the catastrophe that we always warned Maria had been, and of course the insufficiency of the standard protocols that we had.’

The governor said he would sign an executive order to create a committee to examine the recommendations from GWU researchers and find ways to put them into practice.

The previous findings by Harvard University blamed most deaths after Hurricane Maria on interruptions in medical care due to power outages and blocked or washed out roads.