Hurricane Maria’s death toll in Puerto Rico has hit 51, but there have been 900 cremations on the island since the deadly storm made landfall on September 20.

The Puerto Rican government is permitting funeral homes and crematoriums to burn the bodies of people who they say died as a result of Hurricane Maria — but those people are not being counted in the official death toll, according to a report from Buzzfeed News.

The directors say in many cases they don’t know how to classify hurricane-related deaths, or whether they should send bodies to the central institute certifying official hurricane deaths, the Institute of Forensic Sciences.

Because of this confusion, the official death count likely does not include all deaths from the devastating storm.

The death toll in Puerto Rico from Hurricane Maria has hit 51, but experts say that number is likely significantly shy of the real toll of the deadly storm that made landfall in the U.S. territory on September 20 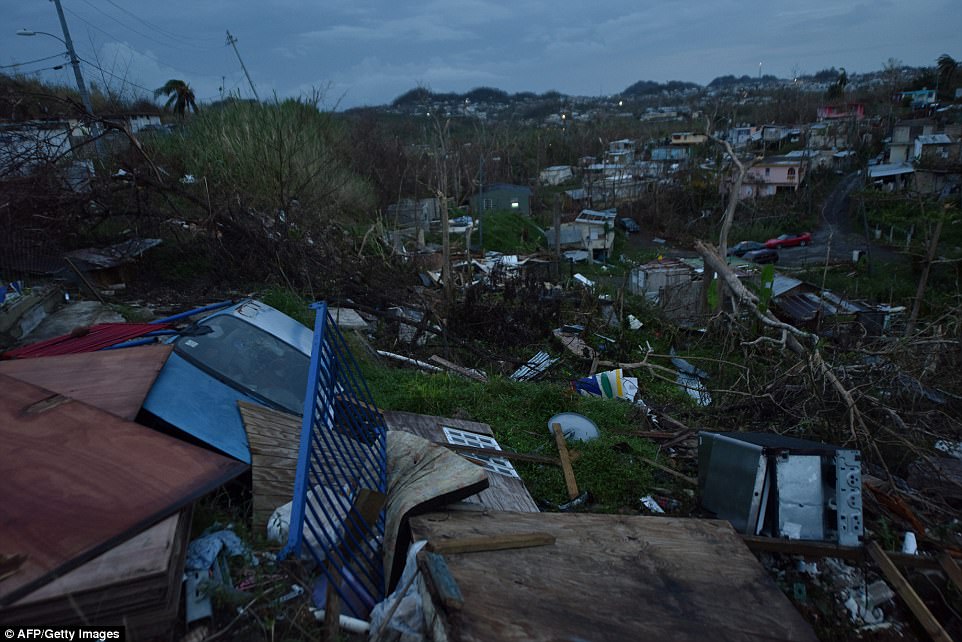 More than five weeks after the storm hit, 2.6 million people are without power, at least 875,000 people don’t have access to running water, and 66 percent of the island still doesn’t have cell service 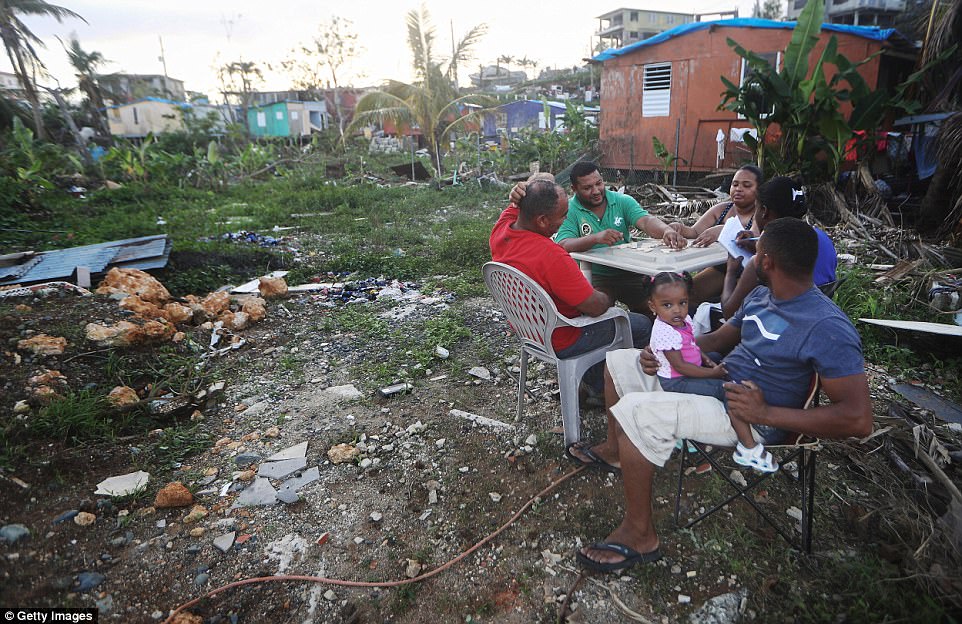 More than 900 cremations were authorized by the government between September 20 and October 18, which is significantly higher than normal. However, those deaths were not officially linked to the hurricane. For families, correctly identifying deaths that are hurricane-related is important when it comes to getting insurance money

Accurate death toll data is important because it can be used to help governments prepare better for future disasters.

For families, correctly identifying deaths that are hurricane-related is important when it comes to getting insurance money.

‘In a national disaster you’re one of however many and everyone is focused on food, water, life support,’ Robert Jensen, CEO of disaster relief contractor Kenyon International, said, ‘and that makes it just a little bit harder for the families of the dead because it feels like their life didn’t matter.’

When President Trump visited the U.S. territory on October 3, he boasted that the death toll was just 16.

By the time he returned to Washington that day, the toll had doubled. It is now 51, but the Department of Health and Public Safety said that the death toll will not rise unless a body is sent to the island’s capital of San Juan to be reviewed by a medical examiner.

Last week Trump was asked how he would rate the White House’s response to the crisis, to which he replied: ‘I’d say it was a 10.’

More than five weeks after the storm hit, 2.6 million people are without power, at least 875,000 people don’t have access to running water, and 66 percent of the island still doesn’t have cell service.

‘This is a ‘people are dying’ story,’ Yulin Cruz said angrily on September 29.

Trump unsurprisingly responded to the mayor’s attacks by tweeting: ‘The Mayor of San Juan, who was very complimentary only a few days ago, has now been told by the Democrats that you must be nasty to Trump.’

Trump was also criticized for throwing paper towels into the crowd during his visit to the island. 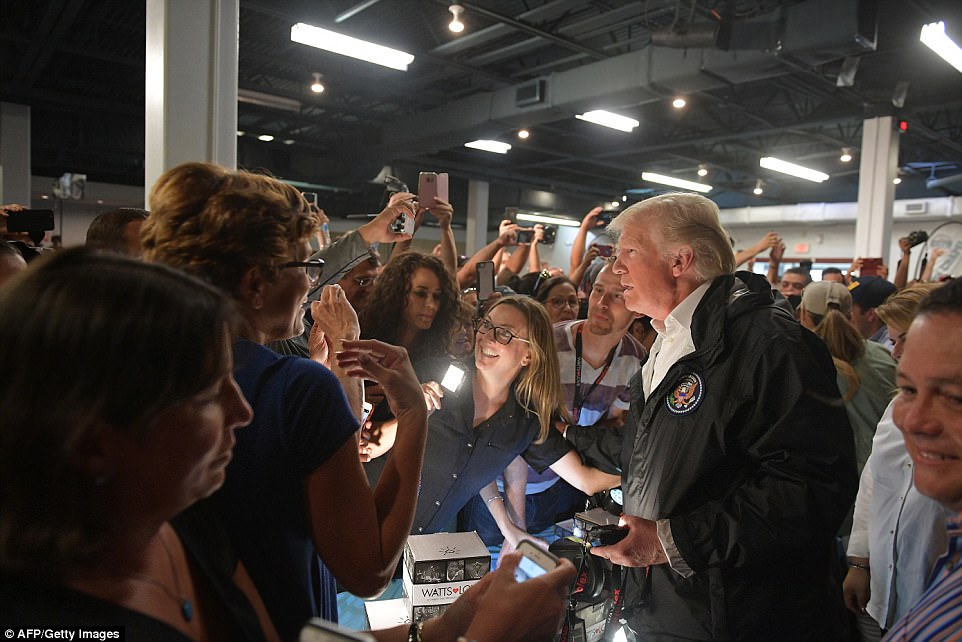 President Trump is shown during his visit to Puerto Rico on October 3. While on the island he boasted that the death toll was just 16. By the time he returned to Washington that day, the toll had doubled, and is now 51 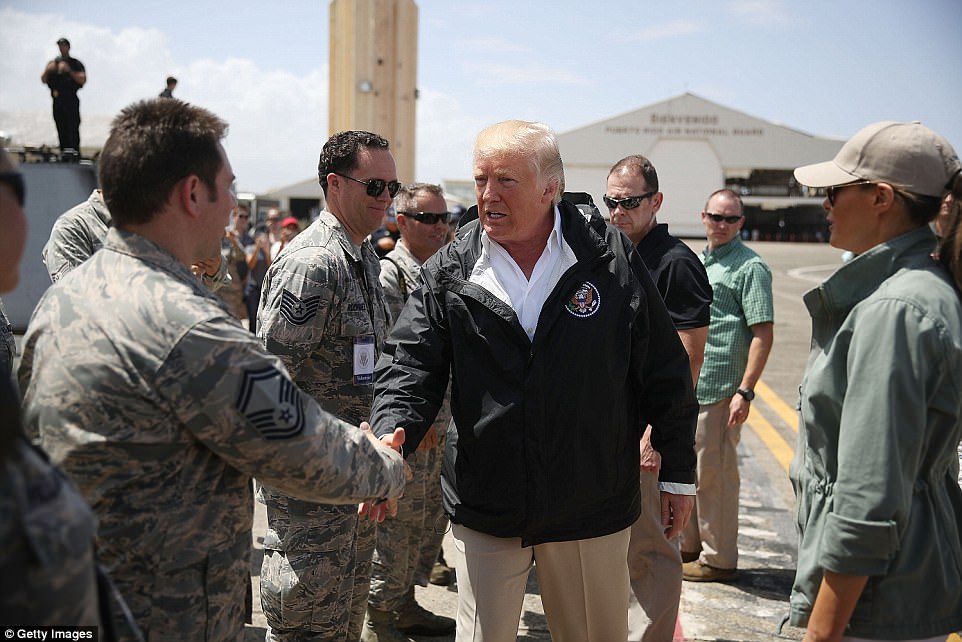 Last week Trump was asked how he’d rate the White House’s response to the crisis, to which he replied: ‘I’d say it was a 10.’ 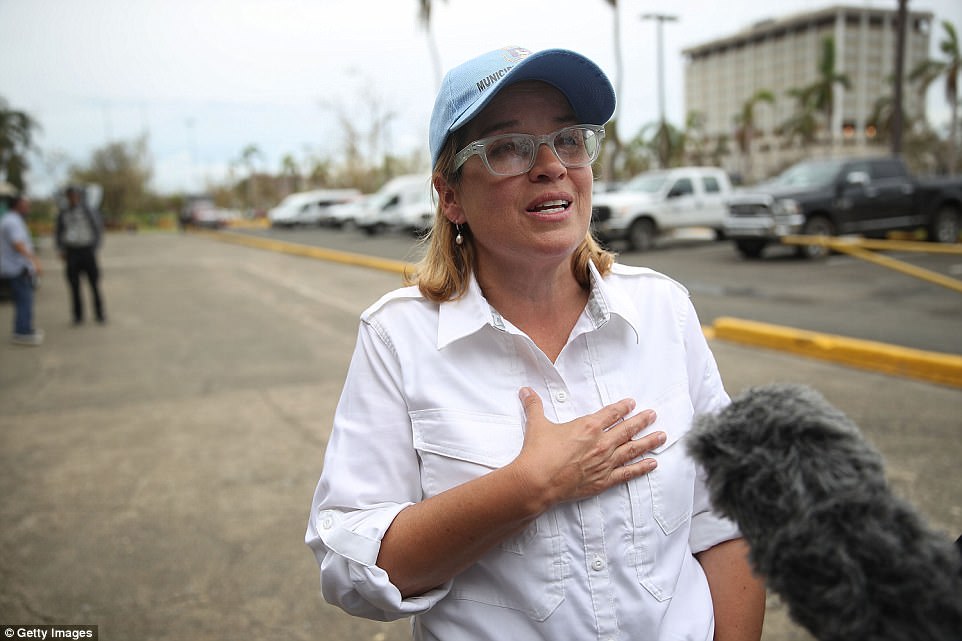 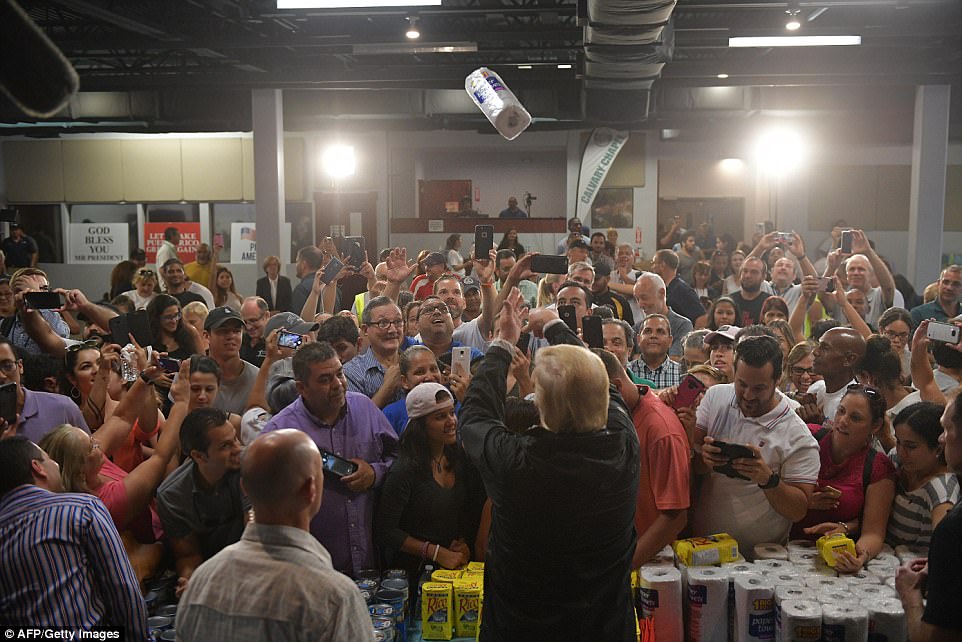 Trump was also criticized for throwing paper towels into the crowd during his visit to the island, as shown above 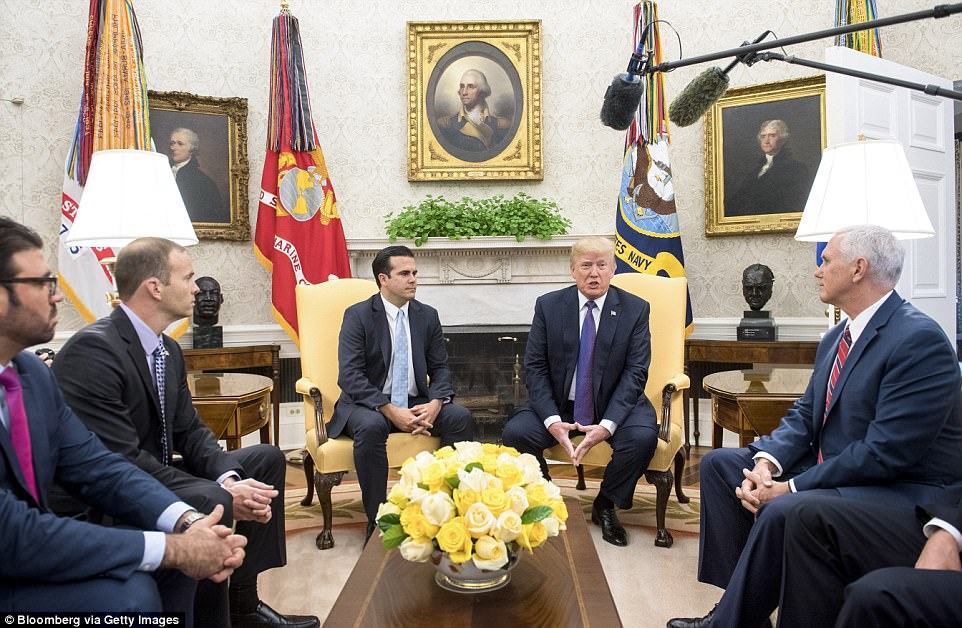 Following Hurricane Katrina, FEMA contracted Kenyon International, a private company that specializes in recovering and identifying remains after disasters. It also assisted authorities after 9/11, the Oklahoma City bombing, and the Grenfell Tower fire in London.

The company has not been contacted by federal agencies or the Puerto Rican government for relief on the island.

‘One of the things I advise governments to do is … come up with and put out guidance on what is the time period, the definition, the cause, manner, and mechanism [for counting deaths],’ CEO Jensen said.

‘What we want to be able to do is clearly identify what was the human cost in this event and make it easier,’ he said. ‘In the absences of leadership or guidance, people are going to take action. The dead can’t just sit.’

He said the current lack of transparency and communication with those handling burials and cremations across the island means the count is less likely to be accurate.

Jensen called the lack of instruction and communication in Puerto Rico a ‘failure of government.’

‘I’d love to say that it’s an intentional cover-up but it’s just bureaucracy at its worst,’ he said.

The public safety department funeral homes, crematoriums, and hospitals are responsible for notifying and sending to the forensic institute if they’re possible hurricane-related deaths.

However, many funeral home and crematorium directors say they haven’t received any specific guidance on what they’re supposed to do with the bodies of people who died as a result of the hurricane.

There are conflicting definitions of what counts as a hurricane-related death and what doesn’t between directors.

Some classified cardiac and respiratory failure after the hurricane as death by ‘natural causes’ only.

Others said they consider those hurricane-related because they happened as a result of the conditions created by the Maria: a lack of food, water, electricity, and fuel. 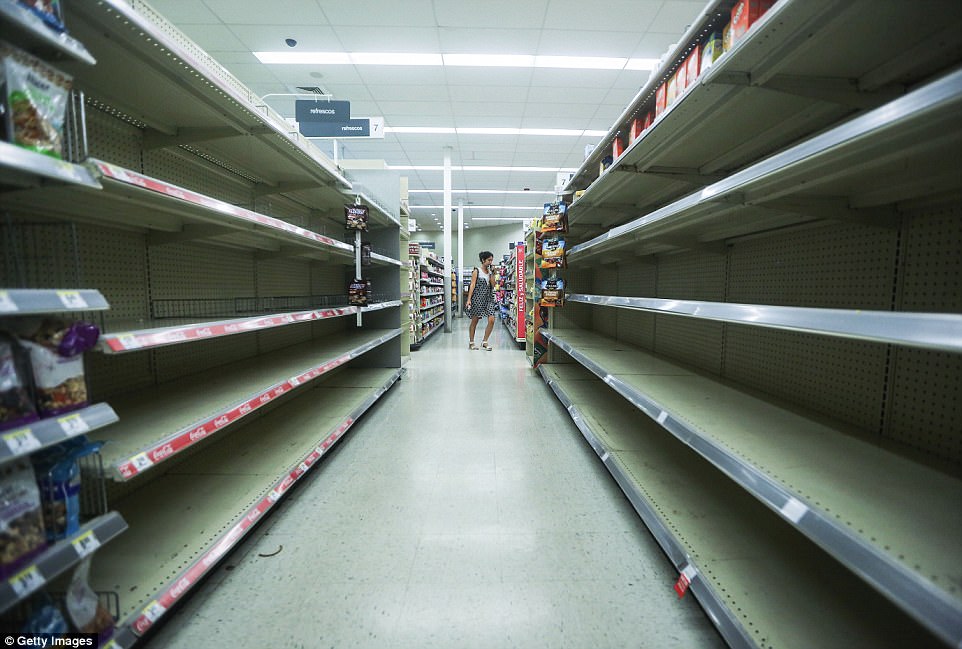 Many deaths were likely an indirect cause of Hurricane Maria such as lack of food, electricity, and fuel on the island 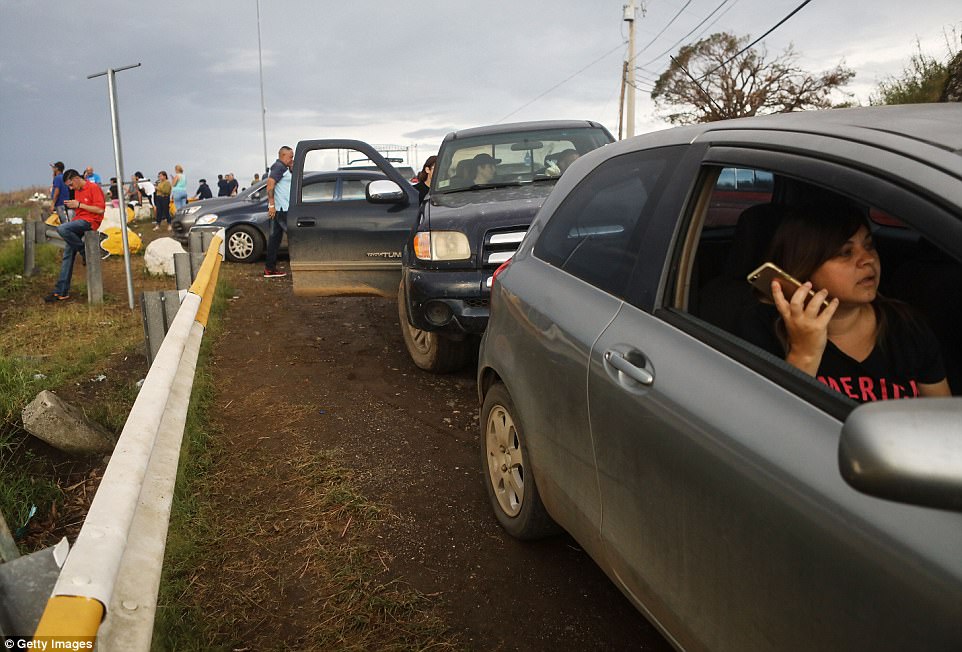 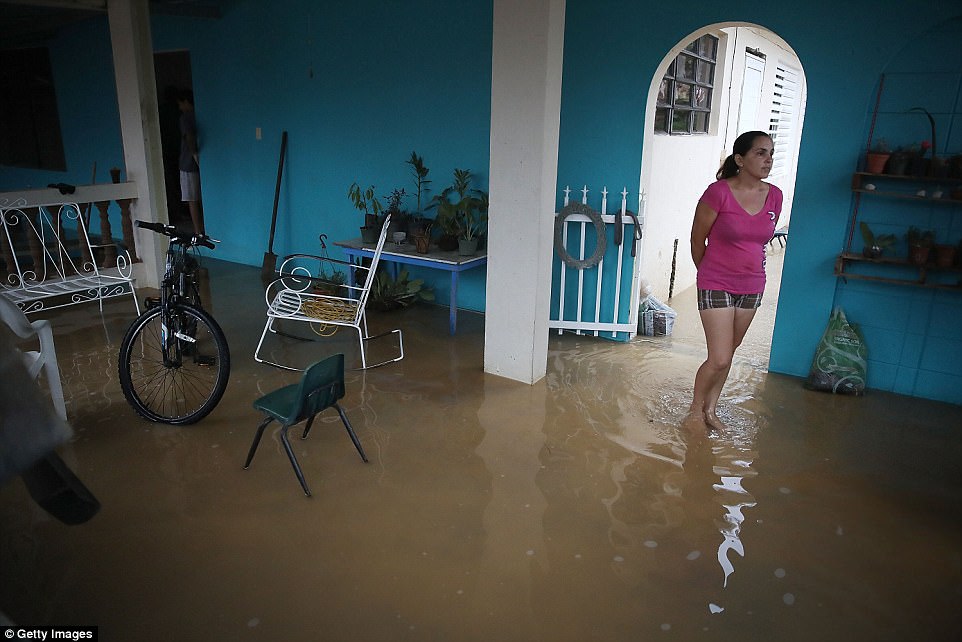 Abigail Maldonado stands in her flooded home in Utuado, Puerto Rico. Her neighborhood waited more than 15 days for government aid to arrive after the hurricane hit the island 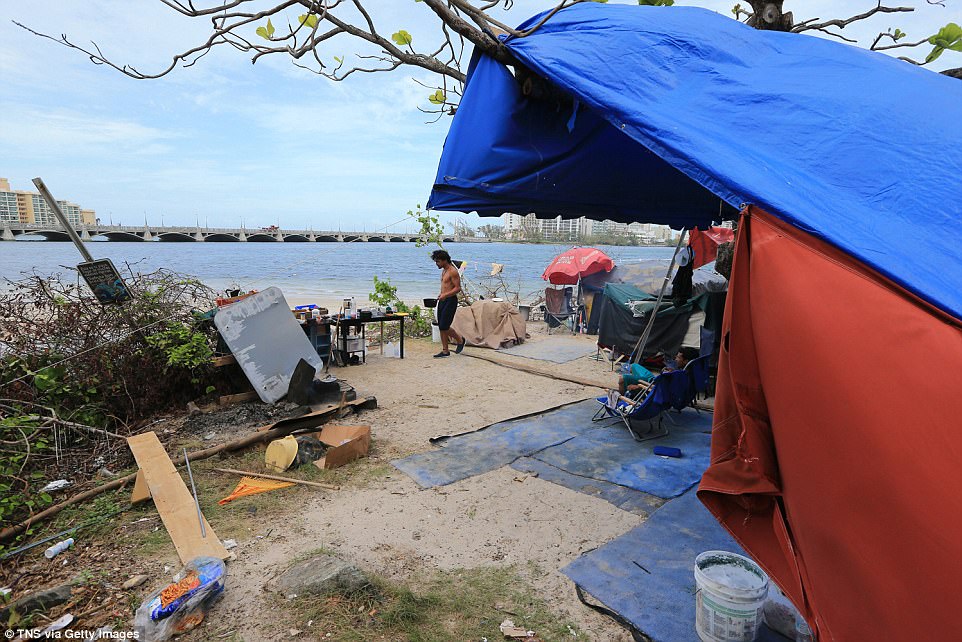 Nearly a month after the hurricane, families are shown in a makeshift shelter in the island’s capital of San Juan

Experts said the confusion is the result of a lack of guidance from the public safety department.

Funeral home and crematorium directors in the Puerto Rican municipalities of Aguadilla and Mayagüez told BuzzFeed News they had received dozens of bodies of people who died of hurricane-related causes.

The Forensic Institute permitted the bodies of at least 42 potential hurricane victims to be burned, one crematorium director claimed.

Secretary of the Department of Public Safety Héctor M. Pesquera released a statement after the original Buzzfeed article was posted saying that 911 cremations of ‘natural deaths’ were authorized between September 20 to October 18.

‘The number of deaths related to Hurricane María remains being 51. The 911 authorizations of cremation issued by the BFS, during previously established period, are of natural deaths that, at the time of specific evaluation, had not suspicion that would stop the requested process,’ the statement said.

Columbia University professor John Mutter, who studied how the death count was handled after Hurricane Katrina, said Puerto Rico’s procedures seem to be ‘trying to keep the numbers low,’ which he called ‘unconscionable.’

When asked if the number of hurricane-related deaths in Puerto Rico has been undercounted, a spokesperson for the Puerto Rico Department of Public Safety said: ‘We can’t infer or reach any assumptions or inferences. If there really are cases like this, they have to present them to the authorities.’

Mutter said that based on Puerto Rico’s poverty level and the strength of the storm, he would have expected the death toll to be in the hundreds by now.

‘In fact there’s a lot of deaths that come from the exacerbation of preexisting conditions by the trauma of the disaster event. And they are normally counted. They ended up being counted in Katrina. They are considered disaster deaths. If you take them out you get a small number,’ he said. 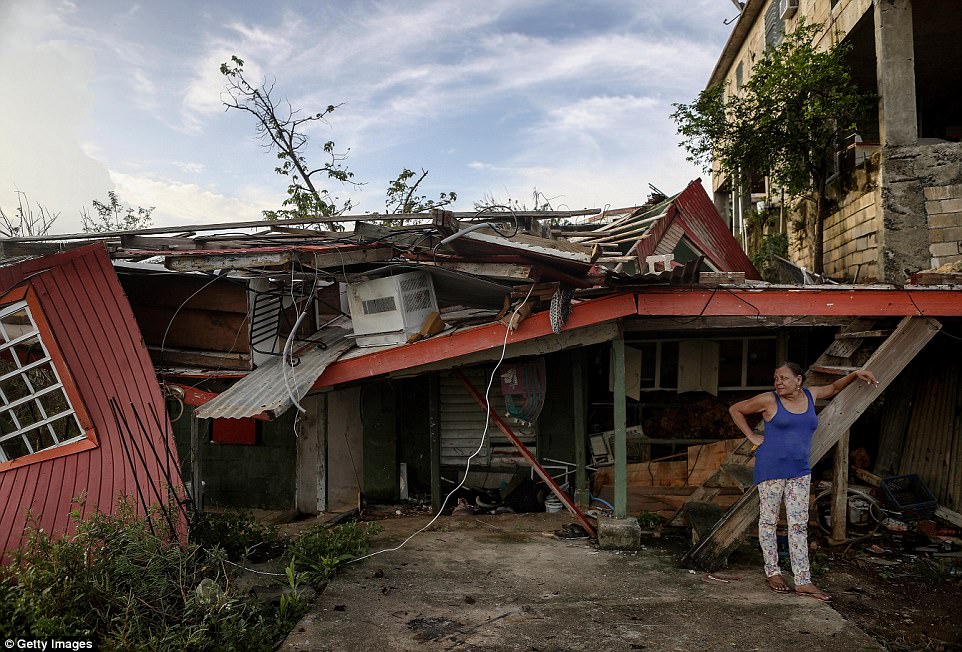 A woman stands outside of her destroyed home waiting for aid. Columbia University professor John Mutter, who studied how the death count was handled after Hurricane Katrina, said procedures seem to be ‘trying to keep the numbers low’ 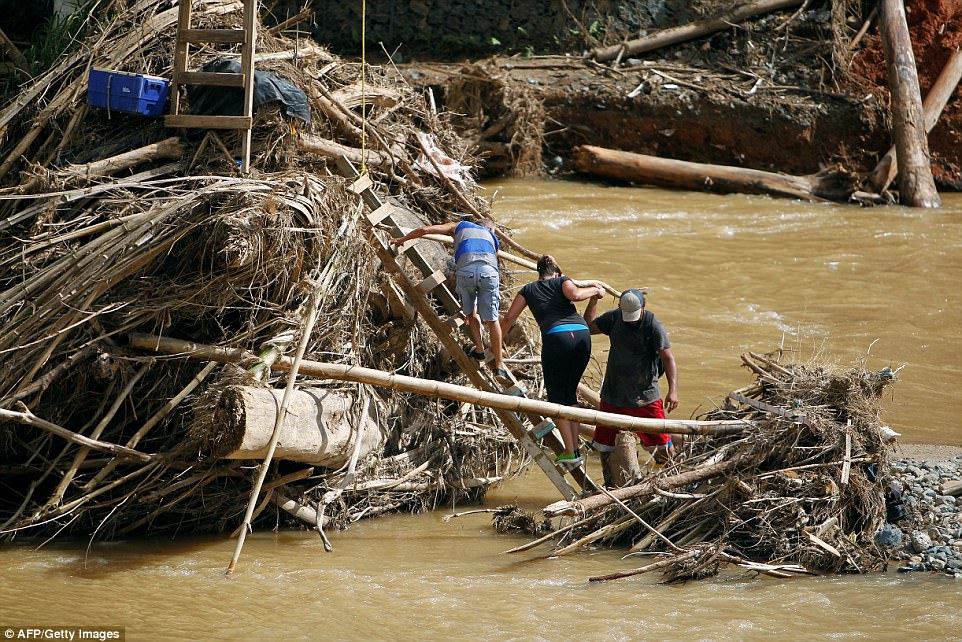 Mutter said that based on Puerto Rico’s poverty level and the strength of the storm, he would have expected the death toll to be in the hundreds by now. Above, a group of people climb over piles of debris to pick up supplies

Staff at the only crematorium in the municipality of Aguadilla, which has about 60,000 people, said that they were given permission by the forensic institute to cremate at least 42 bodies of other people who had died as a result of the hurricane.

The 42 people cremated at Crem del Caribe died from a lack of oxygen supply, failure of dialysis and oxygen machines because of the lack of electricity and heart attacks.

‘A lot of people have died as an indirect result of the hurricane,’ the crematorium’s director Jaime Domenech said. ‘Especially older people, who because of their health conditions many of them depended on electricity.’

The institute does not have guidelines for which hurricane-related deaths to add to the official death toll and which to keep off, so they’re making decisions on a ‘case-by-case’ basis, according to Karixia Ortiz Serrano, the acting as spokesperson for the institute.

‘There are no specific categories, but they look at the situation, interview family members, analyze it, and come to their decision — and everything has to be scientifically-based,’ she said.

The lack of instruction for creating an official death toll is not unique to Hurricane Maria in Puerto Rico, but is a recurring problem in the U.S.

Experts say there is no federal standard because local coroners and governments have jurisdiction over counting and certifying deaths.

The Department of Public Safety said it would periodically survey the death toll.

Two US representatives and 13 senators recently wrote letters to the acting head of homeland security requesting investigations into the death toll.