Husband threatens to leave wife if she gains weight

A woman who shed 60lbs while following a weight loss programme with her husband, revealed she ate junk food to spite him for threatening to leave if she regains her excess pounds.

Writing anonymously on Facebook’s That’s it, I’m MF spouse shaming group, the woman, who is believed to be from the U.S., explained that she lost 60lbs while her husband lost 100lbs last year.

However, after the coronavirus pandemic saw much of the world go into lockdown, the woman confessed that she began to indulge in a few more unhealthy snacks than she’d allowed herself during her diet – while joking that her local fast food eatery would  ‘be the death of her’.

Controversy: An anonymous woman sparked a debate about voicing concerns over your spouse’s weight, after revealing her husband threatened to leave if she spirals (stock image) 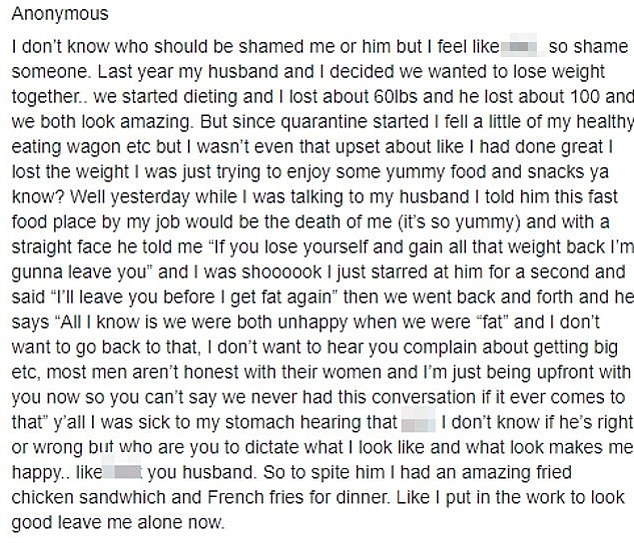 Revenge: The US-based woman explained that she ate fast food to spite her husband for commenting on her diet

But while the woman felt happy about her decision to relax her diet, she shared that her husband was less than enthusiastic about her laidback approach.

‘Well yesterday while I was talking to my husband I told him this fast food place by my job would be the death of me (it’s so yummy) and with a straight face he told me, “If you lose yourself and gain all that weight back I’m gunna leave you” and I was shoooook,’ she wrote in a Facebook post blasting her husband.

‘I just starred at him for a second and said, “I’ll leave you before I get fat again” then we went back and forth and he says, “All I know is we were both unhappy when we were “fat” and I don’t want to go back to that, I don’t want to hear you complain about getting big etc.’

She went on to explain that her husband said he was simply trying to be ‘honest’ with her – noting that many men are afraid to be ‘upfront’ with their partners about such sensitive topics.

According to the woman, her husband continued that he didn’t want her to ‘say we never had this conversation if it ever comes to that’, adding that the exchange made her ‘sick to her stomach’.

‘I don’t know if he’s right or wrong but who are you to dictate what I look like and what look makes me happy… like f*** you husband,’ she continued.

‘So to spite him I had an amazing fried chicken sandwich and French fries for dinner. Like I put in the work to look good leave me alone now.’

After the message was posted on Facebook, a slew of users shared words of sympathy with the woman, with many arguing that husband should love their wives regardless of how they look.

One person wrote: ‘Nah, if he loves you he loves you no matter what you look like, everyone is struggling right now and he’s not even supporting you through a few nice meals.

‘He’s not going to support you when you’re really struggling and ‘fall off’ and your healthy eating even when it’s better for your mental health to do so.’

Another said: ‘Former fatties can be some of the most judgmental people and it’s gross. I’m on a weight loss journey right now, I’ve worked my a** off to lose 40 pounds so far and still going. If my partner EVER said this to me, they would be gone the second they said it.

‘I don’t give a f*** how “honest” they’re being. If your love is conditional on my appearance, your love isn’t for me. And none of that health b****** either. You took vows in sickness and in health.

‘Also, if he thinks you having a couple unhealthy meals is going to f*** with his progress then he needs to work on his own willpower. He’s the d***. Lose more weight by dropping hiss a**.’

However, there were also a few people who admitted that they agreed with the woman’s husband, arguing that physical attraction is an essential part of any relationship, while praising the man for his honesty.

‘My current husband and I both came from relationships where our spouse “let themselves go” we speak honestly and openly and sometimes bluntly about each other’s bodies,’ one person said.

‘Maintaining our physical attraction to each other is important. I don’t agree with how he said it, but at least he’s being open about his expectations.’

Another added: ‘At least he’s realistic. Treating yourself to more fatty foods isn’t going to keep the weight off.

‘I mean the odd treat but if you were joking about a takeaway place “being the death of you all the time, work and effort” I’d respond exactly the same. No point beating around the bushes and realistically physical attraction is also required to maintain a happy relationship’

A third added:  ‘I think he just worded it wrong but I think he’s right, not about leaving but about unhappiness when we don’t feel fab in our bodies. I’m hoping he just got heated in the moment.’