Huw Edwards is still experiencing ‘breathlessness’ after ‘suffering from COVID-19’ earlier this year.

The BBC News At 10 presenter, 59, said he developed coronavirus symptoms nine months ago in mid-March and was later treated in hospital for pneumonia.

The broadcaster admitted on one evening he thought he wasn’t going to be able to do the show, after arriving at the studio and ‘being unable to speak’.

After effects: Huw Edwards revealed he is still experiencing ‘breathlessness’ nine months on from ‘suffering from COVID-19’ in March (pictured in January)

The presenter told The Observer: ‘I was very ill for a couple of weeks, then I went back to work, which I was pleased to do, but I get very, very breathless if I run up a flight of stairs.

‘There’s a double-floored spiral staircase from the makeup area and one evening I’d gone into the studio at 9.50pm, quite late for me, and I couldn’t speak.

‘I thought: “Oh my God, I’m not going to be able to do the show.” ‘As soon as I’d done the headlines, and I was into the show, I calmed down a bit. But that was a good example of the after-effects.’

Huw developed symptoms on a 10-mile walk in Kent in mid-March and returned to work after a period of rest. 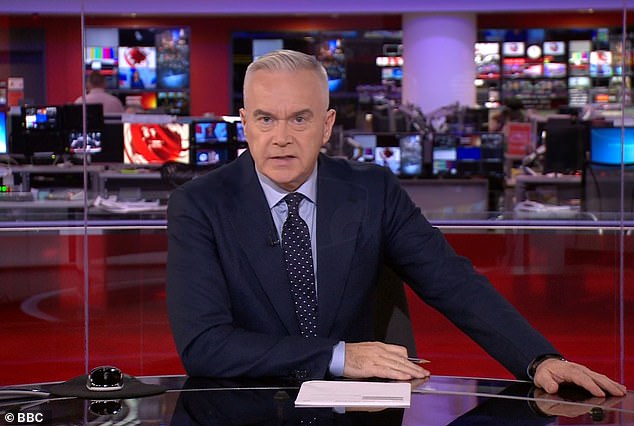 Illness: The BBC News At 10 presenter, 59, admitted on one evening he thought he wasn’t going to be able to do the show, after arriving at the studio and ‘being unable to speak’

The newsreader was treated at Kings College Hospital in Camberwell, London, in early April.

He uploaded a post to Twitter that read: ‘Big thanks to @KingsCollegeNHS for superb care #pneumonia I’ll be back at @BBCNews this week — keep safe everyone and follow the guidelines #StayHomeSaveLives.’

The broadcaster did not say whether he had tested positive for coronavirus at the time.

The BBC reported at the end of April that Huw had not been tested for the virus, but his doctor was ‘totally convinced it was COVID-19’.

Earlier this year, the journalist revealed he weighed 16.5 stone at his heaviest as he battled against depression.

The BBC newsreader told how he began comfort eating following his father’s death in 2010, eating to numb his emotional pain.

‘It was a proper kind of depression about how I felt and where I felt I was, my dad and everything,’ he said, speaking to the Times’ Saturday Magazine in August. ‘I felt it had become rather overwhelming.’

‘The worst thing was I felt I couldn’t do anything about anything. I felt a bit helpless.’

His physical health deteriorated and the newsreader admitted that he failed to acknowledge anything was wrong until an epiphany in 2017.

‘By 2016-17, I had put on a lot of weight,’ he explained. ‘I felt dreadful. I mean, physically. It’s like a drug. I’d eat when I wasn’t hungry. I wasn’t doing any fitness. I was grazing, watching telly and eating stuff, even though I didn’t need it.’

Following the suggestion by his wife Vicky, he took up boxing and running, and with the help of champion boxer Clinton McKenzie, Huw managed to lose an impressive three stone – while his mental health significantly improved, too.

The father-of-five said: ‘Getting physically fit has meant being mentally more robust.’ 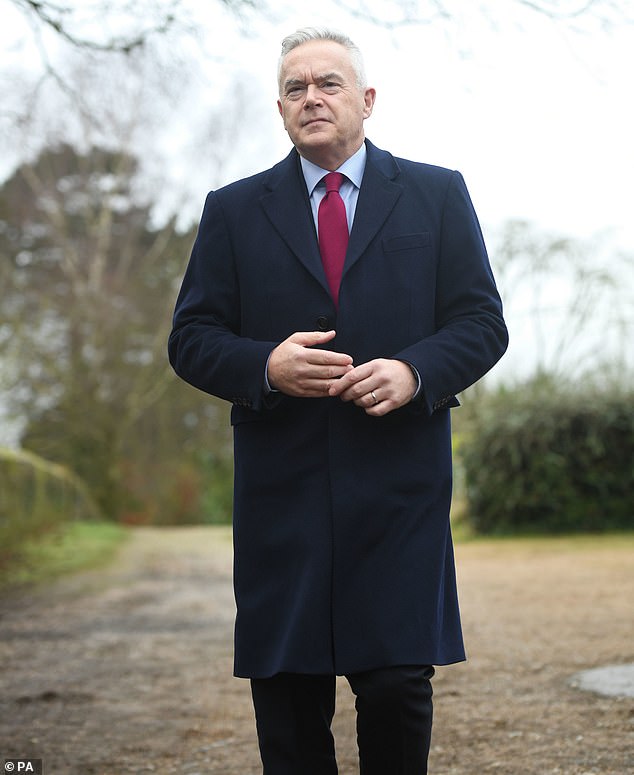 Pneumonia: The newsreader was treated at Kings College Hospital in Camberwell, London, and said his doctor was ‘totally convinced it was COVID-19’ (pictured in January)