You’re Whalecome! Hvaldimir the beluga whale returns a kayaker’s lost GoPro before posing in front of the camera

An incredibly tame beluga whale has pinched a kayaker’s GoPro after he was leaving the waters of Hammerfest Bay in Norway.

Diver Joachim Larssen was out on his kayak when the famous tame beluga whale, came to greet him in September 2019.

The inquisitive whale, known as Hvaldimir followed Joachim’s kayak into the bay and touches up against his vessel.

Joachim saw the opportunity to get some incredible, up close footage of the friendly beast with his GoPro.

With the camera submerged, Hvaldimir comes within inches of the lens showing the gentle giant in incredible detail.

For a moment Hvaldimir  turns side on, gazing into the camera lens before a flicker of an idea crosses his alabaster face.

As he moves closer to the camera Hvaldimir knocks it from its mount which caused the camera to fall to floor but within moments, the helpful whale retrieves it and returns it.

Joachim enjoyed some breath-taking moments, touching and petting Hvaldimir and even seeing all the intricate details on the skin and in his mouth.

What you got there? Hvaldimir seems very curious as he bobs out of the water eyeing Joachim and his camera 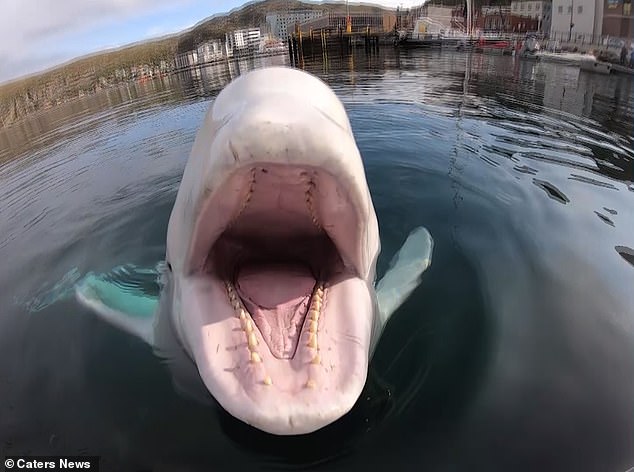 Smile! Hvaldimir opens his mouth wide revealing two rows of teeth running all the way into the back of his mouth

Joachim said: ‘I wanted to film him under water and I think he knows what a GoPro it is so he takes it from me and drops it before he goes down to get it for me.

‘I know the he is probably trains by the Russians and that he was found with a GoPro harness.

‘I was surprised and didn’t want to touch him in the start since i normally don’t touch wild animals unless I’m helping it. 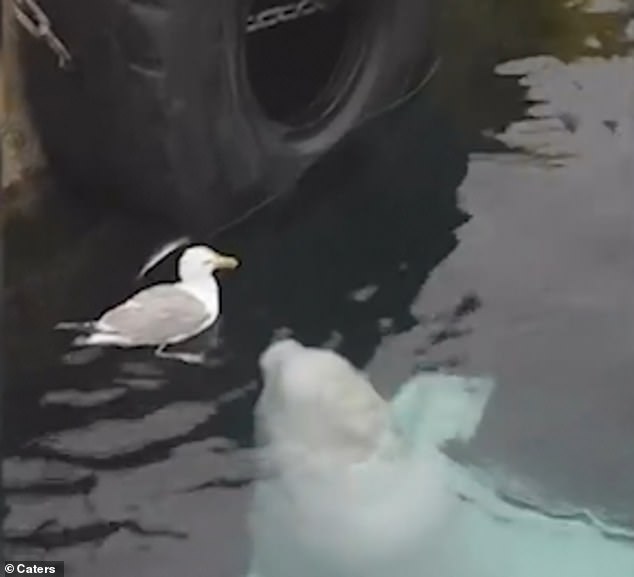 ‘But in this case I made an exception due to how much he wanted contact, it was magical to meet him like this!’

Hvaldimir has had his fair share of publicity recently after being spotted trying to play with a rather grumpy seagull.

The whale initially rose to fame earlier this year when it was believed to have been used as a spy by the Russian navy in Norwegian waters.