Feminine hygiene products have never been so brazen.

Where once marketers stuck to euphemistic terms such as ‘for intimate areas’ and ‘feminine wash’, now brands including Two L(i)ps, VMagic, The Perfect V and WooWoo (for women who ‘care down there’) want to openly sell you everything, from ‘soothing’ sheet masks and exfoliants, to moisturising ‘lips sticks’, fragranced mists, serums and even skin-lightening creams — all products designed to ‘improve’ the appearance or scent of the vagina.

The latest offering is from Vagisil, which is to launch a range of Scentsitive Scents V-Friendly Bath Bombs — which, it says, are the first scented bath products specifically formulated for women’s genitalia.

Meanwhile, entrepreneur Meg Mathews has included an intimate wash and moisturiser in her new menopause range.

Have you? More than a quarter of UK women had used ‘intimate’ wipes or washes in the past six months, according to a 2015 survey by market research company Mintel.

The feminine hygiene market is forecasted to be worth £33.5 billion worldwide by 2022, according to analyst Allied Market Research. The same report found that ‘internal cleansers’ were the fastest-growing product category.

Such products don’t necessarily make specific health claims — rather, they boast vaguely of being able to ‘soothe’, ‘freshen’ or ‘keep intimate skin happy’. More than a quarter of UK women had used ‘intimate’ wipes or washes in the past six months, according to a 2015 survey by market research company Mintel.

But Athena Lamnisos, chief executive of the gynaecological cancer research charity The Eve Appeal, recently issued a broadside against the industry for selling ‘shame in a bottle’ and perpetuating the falsehood that a woman’s body needs freshening or beautifying products in order to be considered normal.

More worryingly for consumers, she voiced concerns that these products risk masking symptoms such as itching, which could mean that women might delay seeking medical advice when something was actually medically wrong.

‘It’s great that we’re being more open and less embarrassed about using words such as vagina and vulva,’ says Dr Anita Mitra, an NHS gynaecologist and research fellow in obstetrics and gynaecology at Imperial College London. ‘But, because these products are out there, it makes women think they should be using them — it’s creating paranoia.

‘We don’t need any of them. No doctor is going to recommend that you use them. I’d never use any of these things myself.’

The problem isn’t only that you’ll be wasting your money — prices range from £2 to £10 for an ‘intimate wash’ and £3 for a pack of 25 wipes, to £43 for 50ml of ‘intensive beauty cream’ — but you could also inadvertently be putting your health at risk.

‘I think these products can potentially be quite harmful,’ says Dr Mitra. 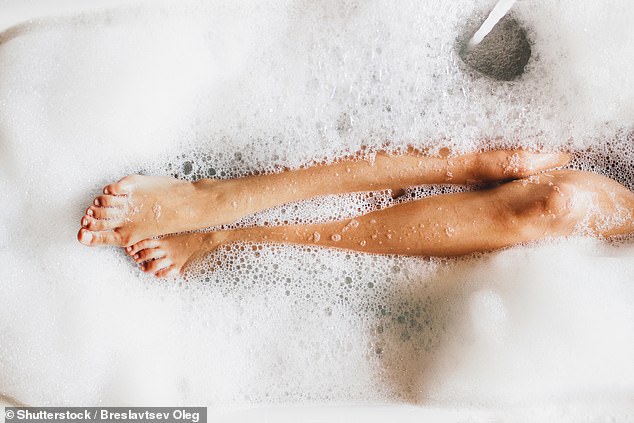 Fact: The feminine hygiene market is forecasted to be worth £33.5 billion worldwide by 2022, according to analyst Allied Market Research

First of all, cleaning inside the vagina ‘increases your risk of infections and thrush, as it disrupts the microbiome [the balance of natural bacteria]’, she explains. ‘It’s likely to wash away the natural “good” bacteria that live there, while “bad” bacteria, which tend to be more hardy and so are able to cling on to our cells a bit better, will flourish and cause infections.’

Nor should you use specific products on the outside. ‘You should use only water,’ says Dr Mitra. ‘Not special washes, not soaps, or anything like that — I’d even avoid getting your regular shower gel near the area.’ As well as washing away healthy bacteria that live there, she says, the skin is incredibly fragile and using soaps on it can cause it to become dry and sensitive.

‘If you start using products there, it’s going to strip away the good oils that your skin makes as a natural, protective barrier. This, in turn, will make the tissue much more fragile and so will increase irritation.’

For the same reason, you should not use exfoliating products, which claim to smooth bumps on the bikini line and prevent ingrown hairs, she says.

‘Scratching the skin in this way increases risk of infections — including the risk of human papillomavirus (HPV) getting in there. This is a virus that can cause cervical cancer, but it can lead to vulval and vaginal cancers, too.’

Women should be especially wary of using intimate washes around their periods. ‘Your vaginal microbiome changes throughout the month and, when you’re having your period, levels of helpful Lactobacillus bacteria tend to be slightly lower, as it’s affected by the drop in oestrogen,’ says Dr Mitra.

‘This means you’re more vulnerable to infections such as thrush or bacterial vaginosis around your period, so you don’t want to be cleaning at this time of the month and depleting the “good” bacteria even further.’

One product that Dr Tania Adib, a consultant gynaecologist at Queen’s Hospital in Romford, believes can be beneficial, though, is a simple external moisturiser.

‘A lot of women find it helpful to moisturise the vulva, particularly as they age and the skin becomes drier, or after waxing or shaving,’ she says. ‘But you need a fairly bland product free of parabens and preservatives, as these can be irritating to the area.’

However, Dr Mitra cautions: ‘Chronic skin irritation is common after the menopause, because of fluctuating hormones, but it’s also something I see a lot in women with more serious problems who are self-medicating with over-the-counter products.

‘This can be dangerous because, as well as common skin diseases such as eczema or psoriasis, skin irritation on the vulva could be lichen sclerosus — a chronic inflammatory condition that also puts you at a slightly higher risk of vulval cancer.

‘I saw a patient last week with a pre-cancerous abnormality who had avoided going to the doctor for two years because she’d been using moisturising products to try to deal with it herself. I’ve seen it so many times and it’s dangerous, because cancers of the vulva and vagina are more common in post-menopausal women.’

The one product for which Dr Mitra says there can be a legitimate medical need is an internal moisturiser for dryness, which can be common after the menopause due to falling oestrogen levels.

She adds: ‘There are some over-the-counter moisturisers we will recommend for this. But you should still go to a doctor and have one prescribed to make sure there’s nothing else going on.

‘That’s my big problem with all of these products. It puts the onus on women to sort it all out themselves, perpetuating a myth that if you have a problem down there, it’s because of cleanliness or not moisturising. They’re turning what should be seen as a health issue into a lifestyle one.’