‘I am America’s sweetheart’: Rippon considers his future

Skating star Adam Rippon bid farewell to his one and only Olympics last night declaring he had become ‘America’s sweetheart.’

The controversial gay Olympian, who snubbed Vice President Mike Pence and has rejected going to the White House bash for Team USA, would not confirm whether he would ever skate competitively again.

Rippon, who is 28 and calls the younger US team skaters ‘My kids’, was asked about retirement after finishing out of the medals in the Mens’ Single Skating event.

He said: ‘I have no idea. I think at first I need a five-minute break and a really stiff drink and then maybe like a day or two off the ice, at least to dry out my costumes, and then we’ll see.’

Although he secured a bronze medal with the US team on the ice, he will be remembered for using the Olympics to expose homophobia and a take a stand to represent homosexuals. 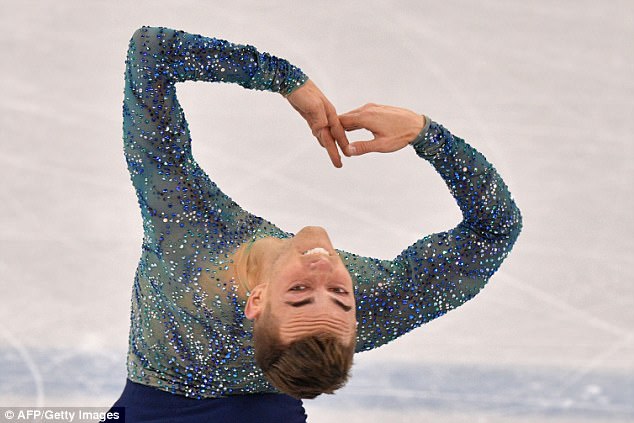 ‘I wanted to go out there and show that I am a serious athlete. But at the same time, have fun and show everybody, who I am. And I think that people have kind of enjoyed my honesty and my openness. 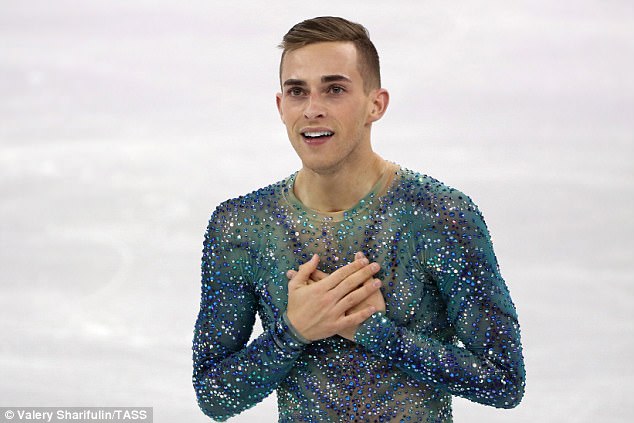 ‘That’s exactly who I am, I have been completely honest with this whole Olympic experience.’

‘It is a once-in-a-lifetime opportunity. And I wanted to be be open and honest about it and fun with the media, it’s a whole part of it that I wanted to enjoy and I enjoyed every single second… I am America’s sweetheart.’

None of the three Americans made it to the medal winners podium, but he revealed when was going through his mind during his four-and-a-half minute routine on the ice to music by British band Coldplay.

‘For me personally, I am going into my last spins and I’m like, ‘I am having my Olympic moment that I have worked so hard for’.

‘Three clean programmes here at the Olympic Games and to come away and finish in the top 10 in the individual and have a bronze medal you know, that bronze is worth its weight in gold.’

Asked why he had connected with the American public and the multimillion TV audience across the world he said: ‘On some level we can all relate to just being rat s—. And I’m a little rat s—. 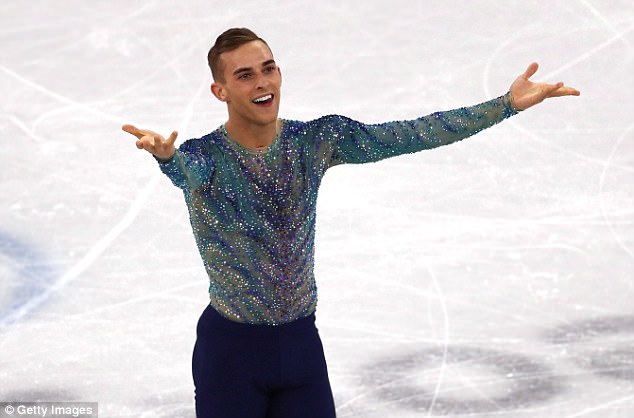 Rippon, 28, did not make the Sochi Olympics, and was competing in his first Games in South Korea

‘I had the time of my life. This Olympic Games has been just amazing. It’s been a wild ride. I’ll bring a lot of memories home. But more importantly, I will bring an Olympic bronze medal from the team event.’

He said at the last Olympics in Sochi he did not make the US team and was ‘in a dark place.’

But he added: ‘I have had a really long career with a lot of ups and downs. This is a dream Olympic games for me.’

US skier Gus Kenworthy watched from the stand and unveiled a rainbow coloured flag in solidarity with Rippon.

‘My friend Gus and his boyfriend were there and it was so nice of them to come to the event. I will be cheering for gus tomorrow. 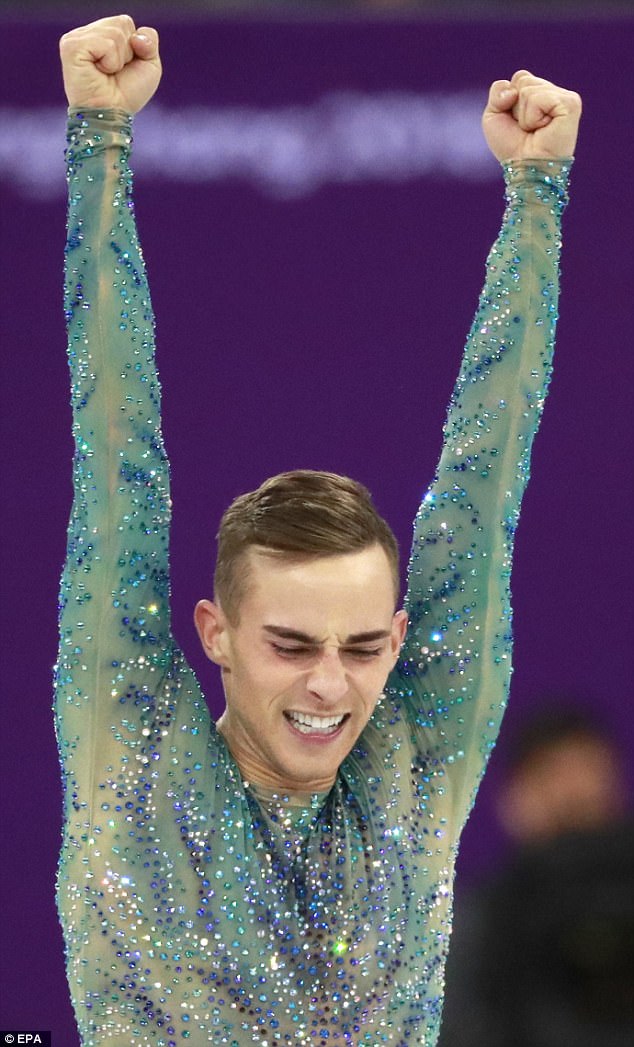 ‘It means the world to me to have my friends and family in the audience.’

‘ I am so glad I have this opportunity to share my skating, my story, and share who I am with the entire world.

‘I think a lot of people when they come to competition are afraid to be who they are.’

‘If you have a personality like mine it is for everybody. I am out there.I am representing my country whether they like me or not. Expect the unexpected.’

‘After the Olympic games somebody’s life has changed forever.

Usually it is the gold medal. But I have a feeling that my life has changed forever. It is great.

‘And I want to inspire other kids that if you work hard you can do anything.’

Rippon added: ‘I am so proud of my two really little, really young teammates. They are amazing and they inspire me to be better and better every day.’ 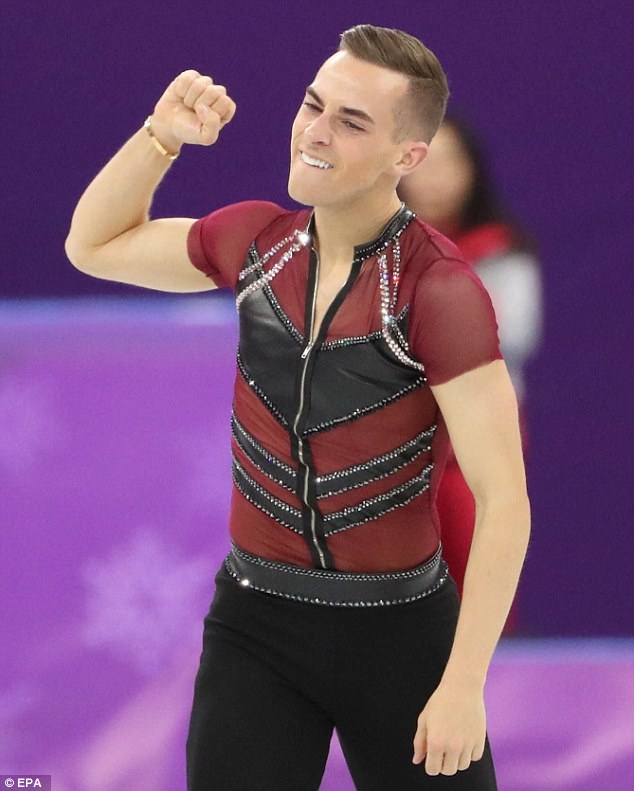 Speaking exclusively to DailyMail.com the gay athlete, who was trending worldwide as number one on Twitter after his first day routine, said his decision not to go to meet President Trump would be ‘ to support my community.’

He added: ‘No. I have no desire to go to the White House.’

‘But I would like to do something to help my community.’

‘I have kind of spoken out a lot and I’d I like to do something positive and not just stay at home.’

He said this would probably mean staging an event of his own to highlight his campaign against homophobia and for gay rights. 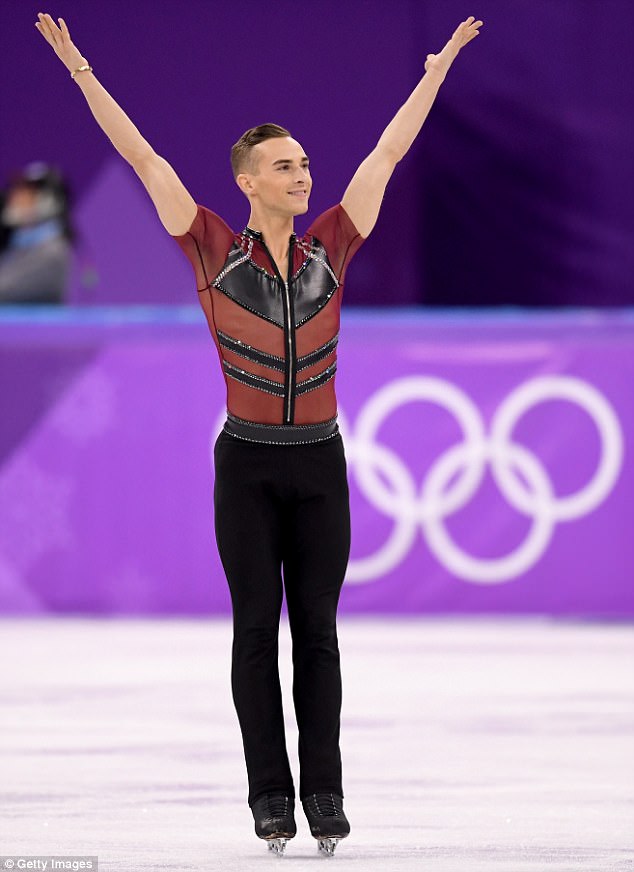 The controversy is not likely to go away and is certain to embroil President Trump when he throws his traditional bash for US Olympians.

Traditionally the President invites Olympians to a reception in Washington with former President Obama twice inviting both summer and winter athletes.

The gold was taken by Japan’s Yuzuru Hanyu who also won in Sochi and became the first man to defend the title since 1952 when American Dick Button was the consecutive champion.

Silver went to Shoma Uno and bronze was claimed by Spain’s Javier Fernandez.

Last night Gus Kenworthy who was in the arena, tweeted: ‘I don’t fully understand figure skating judging so I cant really speculate on the scoring but @Adaripp’s performance was truly mesmerizing. You’re #1 in our hearts Adam! So proud of you and inspired by you.’

Senator Bob Casey tweeted: ‘@Adaripp your infectious spirit and positive attitude have been an inspiration – Pennsylvania is proud of you!’

Meryl Davis who won gold in ice dancing at the 2014 Olympics tweeted: ‘What a showing at these games. You have worked so hard to earn these moments. Congratulations @Adaripp. Way to rep the USA so beautifully.’