‘I am innocent and will vigorously defend the charge’: Footy star Jack de Belin speaks out

Rugby league star Jack de Belin has insisted he is innocent in his first public statement since being charged with pinning down and raping a 19-year-old girl.

The Dragons forward, who is on a $600,000-a-year salary, was on Thursday banned by the NRL from playing while court proceedings against him continue.

After the NRL announced the ban, de Belin issued a statement via his club, St George Illawarra.

‘Rugby league has always been a big part of my life, I love the game,’ de Belin said.

‘I am innocent and will vigorously defend the charge against me.’ 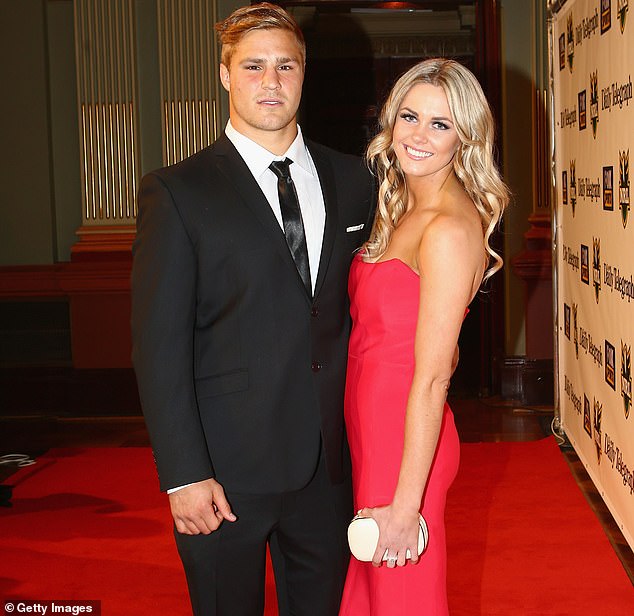 De Belin, 27, went on to thank his heavily pregnant girlfriend, Alyce Taylor (pictured together in 2012), for sticking by his side despite the horrific allegations levelled against him

De Belin, 27, went on to thank his heavily pregnant girlfriend, Alyce Taylor, for sticking by his side despite the horrific allegations against him.

‘I want to thank my partner, family, friends, the club, members, sponsors and fans for the support they have given me during this difficult time,’ he said.

The forward is accused of raping a 19-year-old girl with his friend Callan Sinclair after they invited her home following a night out in Wollongong on Saturday December 8.

He pleaded not guilty when he faced Wollongong Local Court, and was previously told he could continue playing for the team as he fought the charge.

But the NRL on Thursday announced a new policy which says that players charged with criminal offences can be banned while proceedings continue.

Under the new rules, a player charged with any offence that carries a prison term of 11 years or more will be stood down, and players whose offending involves women or children can also be stood down, despite the accompanying sentence. 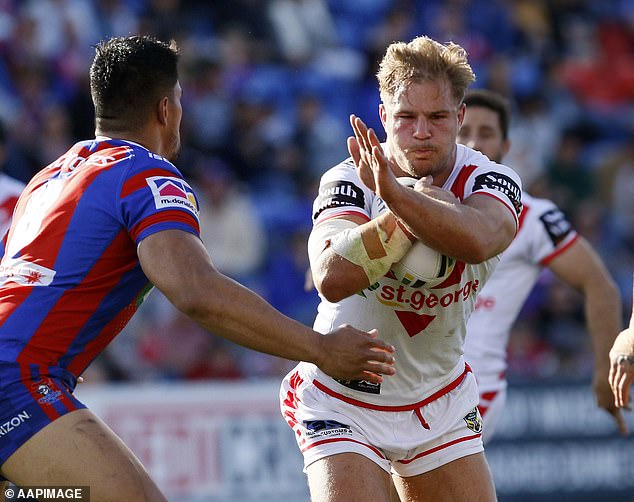 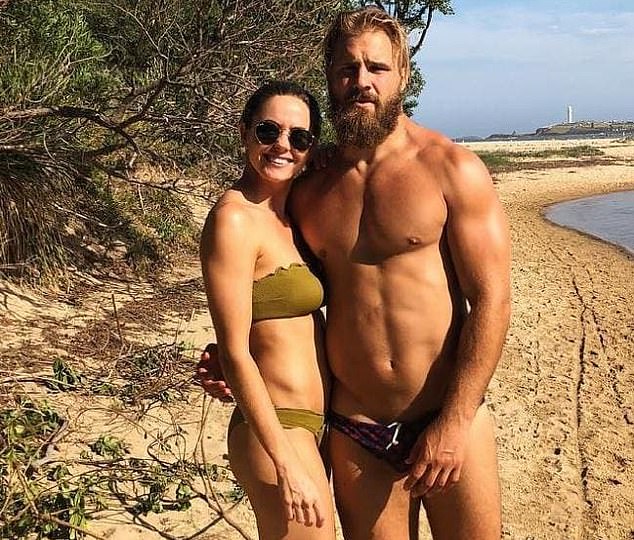 In a press conference on Thursday afternoon, ARL Commission chairman Peter Beattie told reporters they believed the decision was ‘in the best interests of the game’.

‘What we’ve unanimously decided to do is establish a benchmark, where there is a no fault stand down for players who are charged with serious criminal offences above that line [of an indictable criminal offence that carries a jail term of 11 years or more],’ he said.

‘Underneath that, there will be charges that aren’t in that severity, but that will be for the CEO to deal with.’

Mr Beattie said the NRL was not attempting to judge guilt or innocence, but wanted to protect the quickly eroding reputation of the sport.

‘The issues of innocence and guilt are determined by the court,’ he said.

‘We are creating a benchmark and standard to protect the sport.

‘This is, in a nutshell, about rebuilding the reputation of rugby league.

Under the previous policy, players were allowed to continue playing while their court case ran its course. 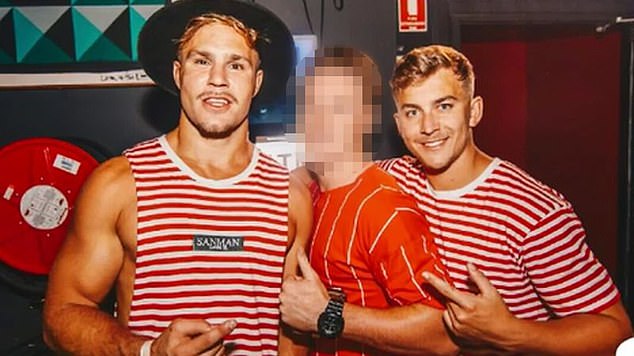 De Belin will still be entitled to train with his team and receive his full salary as his trial is heard, as the stand down does not assume guilt (Jack De Belin pictured left and his friend and co-accused Callan Sinclair right)

When the players are stood down under the new policy, they will be entitled to full pay and to attend training with their team, to ensure player welfare is maintained, meaning de Belin will remain on his $600,000-a-year contract.

The game has been under pressure from broadcasters and sponsors to protect its image after an off-season which has been derailed by poor behaviour and a string of controversies.

‘Whatever decision we made today would have been controversial,’ Beattie said.

‘This is not about being popular, this is about doing the right thing by rugby league. This is also about sending a clear message that the game doesn’t tolerate violence.’ 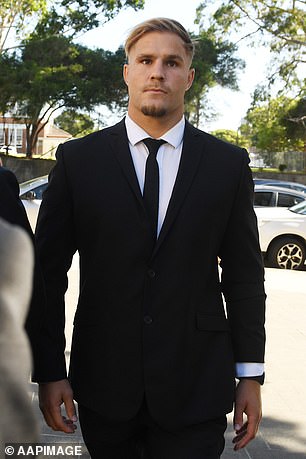 Jack de Belin will be entitled to receive his $600,000 wage, and will be allowed to train with his team, but will not play for the Dragons until his case has been finalised

The policy change has been strenuously opposed by the Rugby League Players Association which says it will prejudice the players’ right to a fair trial.

It opens the door for players to sue to the NRL with the players’ union understood to be ready to support any player who exercises their legal rights.

Police allege on the night of the alleged rape, de Belin grabbed a teenage girl by the throat while he assaulted her, leaving her with visible injuries to the neck, shoulder, stomach and legs.

The NSW Origin star allegedly met the 19-year-old on a night out in Fever Nightclub in Wollongong back in December.

He and his friend Callan Sinclair, 21, said they needed to charge their phones and invited the woman to his cousin’s empty apartment, police documents claim.

While the woman was using the bathroom, de Belin allegedly stripped naked and barged in to take a shower.

The teenager allegedly left the en-suite before de Belin returned to the bedroom and forcibly took off her top, the Sydney Morning Herald reported.

She put her hands over her breasts before de Belin and Sinclair allegedly said ‘show us your tits’, the woman claimed.

De Belin then allegedly took the woman’s shorts and underwear off and threw her to the ground.

The police fact sheet referred to in court said: ‘De Belin moved himself between her legs, lent down and put his right hand around her throat and [his] right forearm pinned the upper left side of her body.’

The 188cm forward, who weighs 106kg, then allegedly began raping the 51kg girl.

Sinclair allegedly took his top off at which point de Belin said ‘come on have a go.’

It is alleged they jointly raped the woman, swapping positions before Sinclair said ‘I can’t get hard anymore’ and left the room to have a shower.

Sinclair has indicated he will also be pleading not guilty to the charges.

The Dragons said they would consider the changes made by the game’s decision makers and they were concerned for De Belin’s welfare.

‘I’m very supportive of the desire of the NRL to improve player behaviour and propagate the game of rugby league,’ Dragons chairman Brian Johnston said.

‘What we’re dealing with is a very polarising and complex subject regarding Jack de Belin.

‘Above all we’re being guided by the legal system, the NRL rules and code of conduct. And above all we’re very concerned about the welfare of Jack de Belin. That’s our priority.

‘We’re about to head off now and give consideration to the changes the NRL are making to the rules so we can digest that.’ 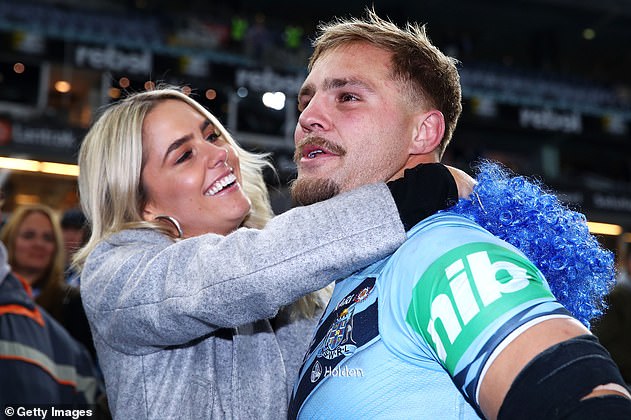 Jack de Belin who has represented NSW by playing for the Blues is set to become a father soon, with his girlfriend, Alyce Taylor (both pictured in June last year), heavily pregnant