Graham Renshaw was killed by his mentally ill son Daniel, who stabbed him 19 times at his Cheshire home on June 14

A mentally unwell man killed his own father before sitting on the living room sofa and shouting: ‘I can’t believe I’ve done this!’

Daniel Renshaw, 27, was caught stabbing his father Graham 19 times by his brother Jason who was woken by the sound of his screaming.

The shocking killing happened on June 14 this year at the Renshaw family home in Ellesmere Port, Cheshire.

Renshaw had admitted manslaughter, claiming his poor mental health meant he had a diminished responsibility. But a jury convicted him of murder.

In the immediate aftermath, the son was heard shouting: ‘What am I doing? I don’t know what I am doing!’

Jason Renshaw told the police that his brother Daniel had suffered mental health problems in the past and had battled addiction to alcohol and drugs.

But Daniel did not remember carrying out the attack, and it emerged the father and son had a ‘good relationship’.

Prosecutors told the trial: ‘Jason Renshaw went to bed and to sleep. He was woken by screaming. He soon realised it was his father who was screaming in pain and thought that he was fighting with Daniel downstairs.

‘He ran down to see his father sitting in the living room on a corner sofa with Daniel standing over him: Daniel’s back was to Jason.

‘He could see Daniel repeatedly striking his father with his right hand. Daniel was saying nothing, but was making loud aggressive grunts.

‘Jason took hold of his brother to restrain him and then noticed that Daniel was holding a knife.

‘He grabbed it from him: Daniel put up no resistance. ‘{Pauline] Renshaw then rang an ambulance…’ 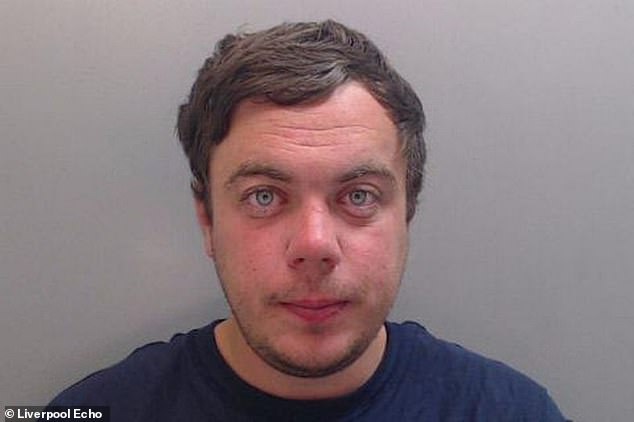 Daniel Renshaw, 27, was caught in the act stabbing his parent Graham 19 times by his brother Jason and has been convicted of murder

Emergency medical treatment was given to Graham Renshaw at the scene and he was taken by ambulance to the Countess of Chester Hospital, but he died a short time later.

On June 13, one day before the killing, Jason recalls his brother staring at the kitchen wall, while drinking a can of Strongbow.

When he asked what was wrong, Daniel replied, ‘Nothing’s up with me.’ Later that evening, Daniel was seen by Jason rocking on his bed whilst he was looking at the floor.

Just after the murder, Jason saw two knives at the murder scene. Renshaw was put in a police van and was taken to hospital where he was seen ‘sitting on a couch making noises.’

He spoke to medial staff at 4.26am, telling them he had cyanide in him and that he needed oxygen. At 5.19am he was rocking and screaming, ‘oowwww’ whilst holding the right side of his torso.

Officers arresting Renshaw described his presentation as ‘shocked or catatonic.’

On March 1, three months before the murder, Renshaw was found on train tracks expressing an intention to commit suicide.

He told police he’d been hearing voices to end his own life, adding he was finding it hard to cope.