A British mother has sparked debate after revealing she doesn’t want her husband to go to a wedding abroad where he will be in the only married man.

The anonymous woman, from the UK, shared a post on Mumsnet explaining her partner had been invited on the week long get-away with a group of single male and female friends.

She explained while she ‘didn’t have trust issues’, she felt ‘uneasy’ about it, especially because it would mean she was left at home with their 10 month old baby on her own.

Many others were left stunned by her comments, with some saying they would be ‘furious’ with their partner for attending a wedding without them.

Posting on the website, the woman wrote: ‘Dear husband’s male friend’s brother is getting married abroad and my husband has been invited.

‘They are having a small wedding so myself and dear child are not invited.

They are all going a week before the wedding, including a few female friends of dear husband/the friendship group and have planned to all do day trips together, hang out, stay in the same hotel etc.

‘Am I being unreasonable to feel a bit uneasy? No trust issues but they are all single and he is the only married one. 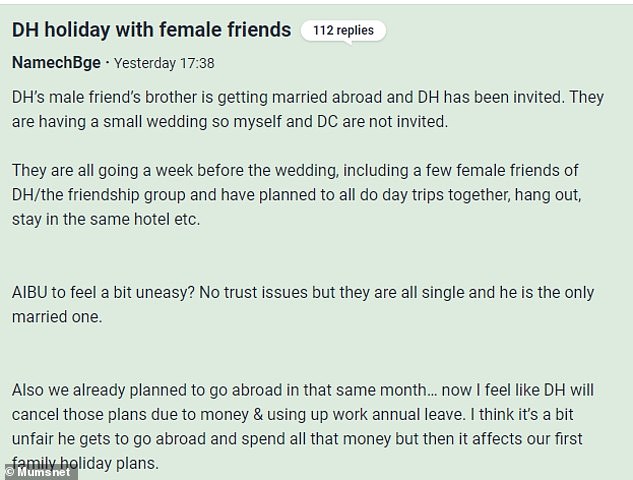 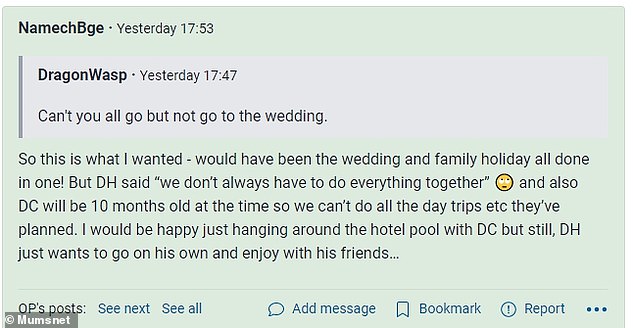 The anonymous woman, from the UK, shared a post on Mumsnet explaining her partner had been invited on the week long get-away with a group of single male and female friends

‘Also we already planned to go abroad in that same month… now I feel like my husband will cancel those plans due to money and using up work annual leave.

‘I think it’s a bit unfair he gets to go abroad and spend all that money but then it affects our first family holiday plans.’

In a follow-up post, she explained how she had suggested she come along for the trip, but not attend the wedding with him.

She said: ‘I would have been the wedding and family holiday all done in one!

‘But my husband said, “We don’t always have to do everything together” and also dear child will be 10 months old at the time so we can’t do all the day trips etc they’ve planned. 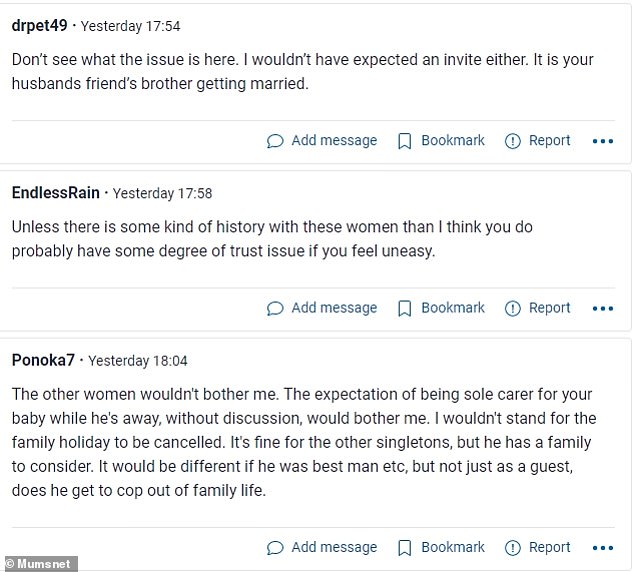 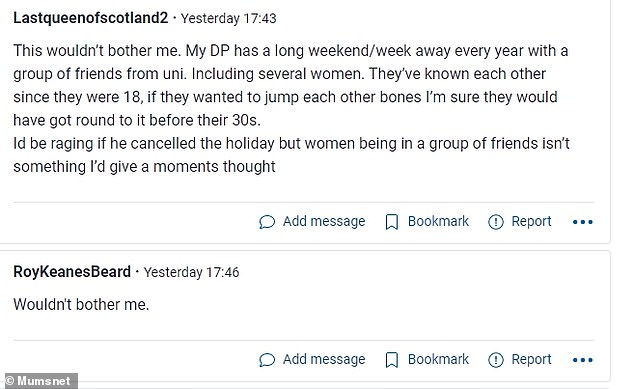 ‘I would be happy just hanging around the hotel pool with dear child but still, dear husband just wants to go on his own and enjoy with his friends…’

However many other users slammed her for her behaviour, saying it ‘wouldn’t bother them.’

One wrote: ‘This wouldn’t bother me. My dear partner has a long weekend/week away every year with a group of friends from uni, including several women.

‘They’ve known each other since they were 18, if they wanted to jump each other bones I’m sure they would have got round to it before their 30s.

‘I’d be raging if he cancelled the holiday but women being in a group of friends isn’t something I’d give a moments thought.’

Another wrote: ‘Don’t see what the issue is here. I wouldn’t have expected an invite either. It is your husbands friend’s brother getting married.’ 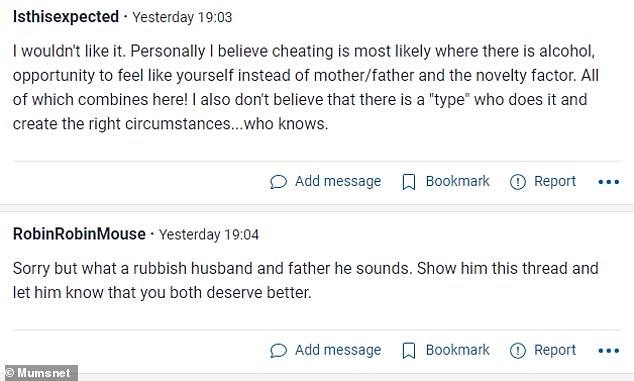 But others agreed with her, calling it ‘incredibly rude’ not to invite her to the wedding and adding they’d be ‘fuming’ if they were in the same position

But others agreed with her, calling it ‘incredibly rude’ not to invite her to the wedding and adding they’d be ‘fuming’ if they were in the same position.

One wrote: ‘Incredibly rude to not invite you and your child (or you, at least). They may be old friends but he’s not a single man any more.

‘If I were your husband, I would have declined.’

Another commented: ‘I wouldn’t like it. Personally I believe cheating is most likely where there is alcohol, opportunity to feel like yourself instead of mother/father and the novelty factor.

‘All of which combines here! I also don’t believe that there is a “type” who does it and create the right circumstances…who knows.’

Another wrote: ‘He clearly just wants to go and enjoy a single persons holiday. Or he would have taken you up on the offer to tag along but not attend the wedding.

‘I can understand you feeling a bit uneasy with a weeks worth of drinking/holiday behaviour to be honest.’