I got deadly skin cancer in my garden… in Surrey

The chances of taking a foreign holiday this summer still look remote for most of us. Not that this bothers mother-of-three Jackie Palmer, who has never felt the urge to go abroad

The chances of taking a foreign holiday this summer still look remote for most of us.

Not that this bothers mother-of-three Jackie Palmer, who has never felt the urge to go abroad.

Growing up, summer breaks with her family were spent on the Isle of Wight — a tradition she continued in married life.

Yet despite holidaying in the UK, Jackie, 70, has had malignant melanoma, the most deadly form of skin cancer, twice. The first time, she was only 35.

‘We’d go to the Isle of Wight for a few weeks each year and stay at a bed and breakfast, so we would be out at 10am and wouldn’t come in until 6pm,’ recalls Jackie, from Esher in Surrey.

‘We spent the days outside, and if it was warm we’d just lie on the beach.’

Unfortunately, such happy memories are tinged with regret, as she believes her double skin cancer diagnosis stems from continued, unprotected exposure to UK sunshine and one episode of bad sunburn.

‘I loved sunbathing as a teenager,’ says Jackie, who is an administrator in the family building firm and is married to Allen, 81.

‘In my teens we didn’t know anything about sunscreen. My mum gave me a bottle of baby oil to rub into my skin — though I’m not sure why. Maybe she thought it was some form of protection,’ she says.

‘The weather wasn’t always hot. But it was usually sunny. And on one occasion when I was 16, after being outside all day, I got very burnt. I was in bed for about three days with angry red skin, pounding headaches and terrible sickness. I’m sure my battle with skin cancer dates back to what I thought were carefree years.’

According to the experts, Jackie could be right. ‘Documented episodes of sunburn from as far back as childhood are a significant predictor of future skin cancer formation,’ says Dr Paul Banwell, a plastic surgeon and founder of the melanoma and skin cancer unit at Queen Victoria Hospital in East Grinstead, West Sussex. 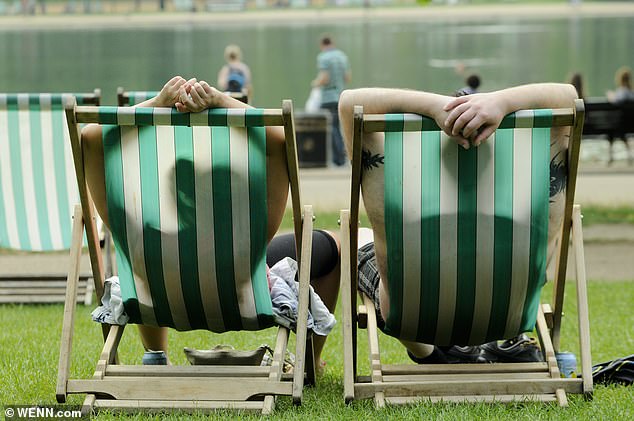 Growing up, summer breaks with her family were spent on the Isle of Wight — a tradition she continued in married life

‘In fact, when screening my patients I ask about sunburn episodes in childhood. We know that when damage to the skin is severe enough, however far back, it can cause future cancer.’

With so much uncertainty about foreign travel, there has been a surge in demand for ‘staycations’. Booking site Avvio shows that, for August, UK hotel and self-catering bookings are up 91 per cent on last year.

Experts fear this may lead to a rise in skin cancer cases, as studies show even those who use sunscreen or limit time in the sun abroad don’t do so in the UK.

A 2019 study by The Hospital Group found 67 per cent of Britons were using too little sunscreen to be protected from UV rays here.

Many holidaymakers may therefore unwittingly expose themselves to the risk of skin cancer, says Dr John Ashworth, a consultant NHS dermatologist based in Cheshire.

‘I often tell patients that, medically, it’s a statistical fact that most UK residents get sunburn in the UK, not overseas,’ he says.

‘That’s because people who holiday in the UK don’t anticipate getting burnt. They think ‘Oh, it’s 18c, this is the first warm weather in months’. Then they go red —the number one risk factor for skin cancer. There’s something about turning skin red that precipitates the DNA mischief that creates skin cancer,’ says Dr Ashworth.

About 16,200 cases of malignant melanoma are diagnosed in the UK every year. Rates have risen faster than any other common cancer — partly driven by an ageing population, as the longer you live, the more likely cases will become apparent. Half of all cases are diagnosed in people over 65.

Melanomas begin in melanocytes, cells found in the lower reaches of the upper layer of skin. These cells produce the pigment melanin, which gives skin its colour. Damage from the sun creates DNA changes and mutations in the cells that can lead to cancer.

While it is less common than other skin cancers, melanoma is more dangerous because of its ability to spread rapidly to other organs, such as the liver.

‘The skin has great capabilities for repair,’ says Dr Banwell. ‘But if it is traumatised — through UV rays which cause what appear to us as a tan or burn — this ability can be challenged. And repeated traumatic episodes put us at risk of changes in cells that turn into cancer. 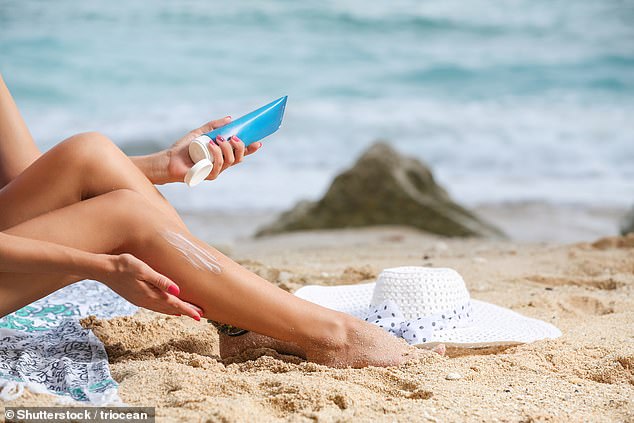 ‘I loved sunbathing as a teenager,’ says Jackie, who is an administrator in the family building firm and is married to Allen, 81. ‘In my teens we didn’t know anything about sunscreen’

‘When I’ve diagnosed patients with melanoma or other skin cancers they might say, ‘But I just stayed in the UK’. Yet they’ve been out all day on the beach without sunscreen, not realising the implications of any UV exposure without protection over that period of time — something you would never do abroad.

‘And this is why skin cancer is still an issue if we have a summer of staycations.’ Jackie was first diagnosed with malignant melanoma after finding an itchy mole, the size of a match head, on the side of her left knee.

Her GP immediately referred her to hospital. ‘I thought it was just a wart as it was removed under local anaesthetic,’ says Jackie. ‘I was surprised afterwards that my leg was so heavily bandaged.

‘The mole was sent away to be analysed and I was horrified to be told days later that it was a melanoma. I didn’t know anything about it other than that it was a dangerous form of skin cancer. ‘I had three young children — I couldn’t die. Fortunately, the doctors said they’d removed it all and it hadn’t spread.’

Over the years, Jackie continued to enjoy moderate sun exposure as a keen gardener and on return trips to the Isle of Wight.

‘Since that first diagnosis, I was always careful not to sit in the sun and to keep my legs covered,’ she says. 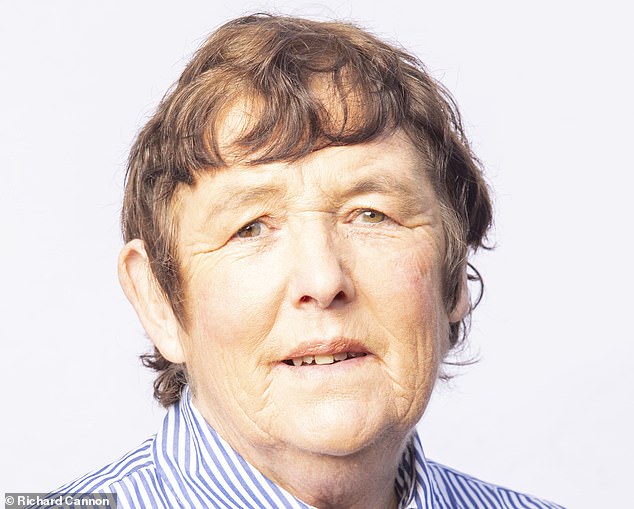 Her GP immediately referred her to hospital. ‘I thought it was just a wart as it was removed under local anaesthetic,’ says Jackie. ‘I was surprised afterwards that my leg was so heavily bandaged

However, two years ago she discovered a purple-coloured blob, about the size of a penny, on the left-hand side of her face just under her ear.

‘I was a bit uneasy about it but thought it couldn’t possibly be cancer again,’ she says.

In fact it was. Jackie needed an operation under general anaesthetic to remove it. It was only thanks to the skill of her surgeon, who filled in the resulting ‘hole’ with a tiny skin graft from the upper side of her cheekbone — that the scar was minimal.

Jackie says: ‘I was shocked. I’m a keen gardener and when the weather was decent I’d be out there without a hat or sunscreen. I just didn’t think about my face as it didn’t get burnt.’

Dr Ashworth says many people, like Jackie, don’t think of themselves as sunbathers.

‘Patients say to me, ‘But I don’t lie in the sun’, and I say, ‘Do you think the sun cares whether you are gardening; playing tennis or sunbathing?’

‘It’s all about the exposure, and in the UK the sun can be strong enough to burn from the start of April to the end of September.’

Which is why, he says, it is important to wear sunscreen every day during this period. Even when it is overcast, the risk remains as UV rays can penetrate the clouds.

Dr Ashworth advises wearing a sunscreen with SPF 50, particularly on the nose, cheeks and forehead, every day, all year round.

Avoiding getting red and burnt is key, he says, especially for younger people. That’s because, while melanoma tends to happen after bad sunburn, it has a long gestation period, so it can appear decades after being burnt as a child.

Dr Ross Perry, a GP and medical director of Cosmedics skin clinics based in London and Bristol, adds: ‘Early detection is key and self-awareness of one’s own skin is the most important factor. Every two months search for any new or changing moles that just don’t look right. Note any you have now in case of future changes.’

‘On both occasions I was told there was a risk my melanoma could spread to the liver,’ she says.

‘Now I always wear factor 50 sunscreen and a hat. We really don’t realise how strong the UK sun can be.’ 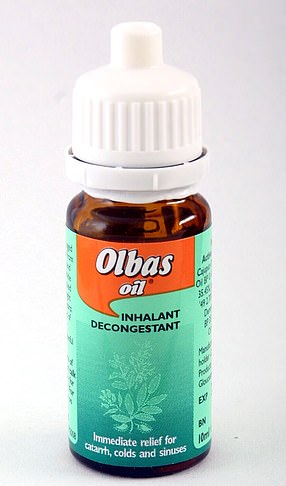 We reveal the ingredients in everyday products. This week: Olbas Oil

We reveal the ingredients in everyday products. This week: Olbas Oil

Cajuput oil — contains a chemical called cineole, which makes the mucus in your lungs less sticky and therefore easier to cough up.

Eucalyptus oil — this also contains cineole, and is also used here as a fragrance.

Clove oil — contains eugenol, an alcohol used by dentists to kill germs and relieve gum pain which has also been found to have anti-viral properties.

Juniper berry oil — helps to balance sebum, the oil produced by the skin. It is sometimes used in natural deodorants as it regulates sweat by blocking the pores, limits bacteria growth and has a pleasant smell.

Levomonthol — a version of menthol, an alcohol found naturally in mint leaves, which has soothing and anti-irritant properties.

Methyl salicylate — used for minor pain relief. It works by making your skin feel cool, then warm. This distracts you from any deeper aches or pains in muscles and joints.