A mother has revealed she has had to put a baby gate in the entrance to her kitchen to stop her five-year-old daughter from constantly snacking.

The mother, 25, from Newport, Wales, has had to get into the habit of always having food out of Harlow’s reach and is aware that she will probably need to put a lock on the kitchen door as her daughter grows up.

Holly Williams, 25, and her daughter Harlow, five, in their Newport home. Harlow was diagnosed with Prader Willi Syndrome when she was just six months old

She explained: ‘Having a baby gate on the kitchen door helps with making sure that Harlow isn’t getting into cupboards in the kitchen, and helping herself to [food].

‘In future I will have to take further measures and as Harlow gets older I will more than likely have to get locks for the kitchen.’

As a result of the condition, Harlow – who weighs around 7st – is roughly 44lbs heavier than the average five-year-old girl.

Explaining how this affects their everyday life, Holly continued: ‘She eats a full meal and will say she is hungry again straight away. 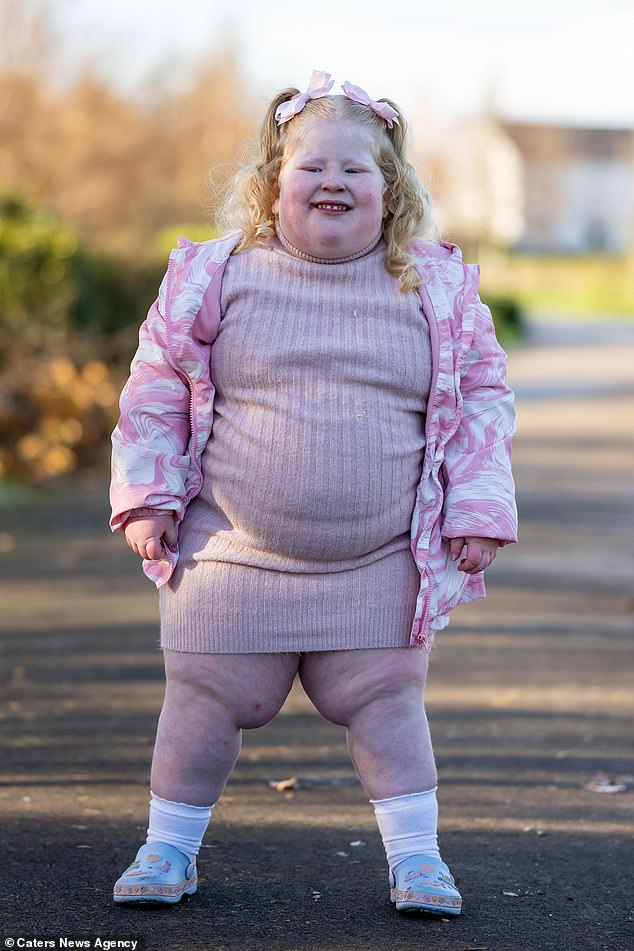 Harlow is missing chromosome 15, which controls hunger, and has therefore never experimented what it is like to feel full 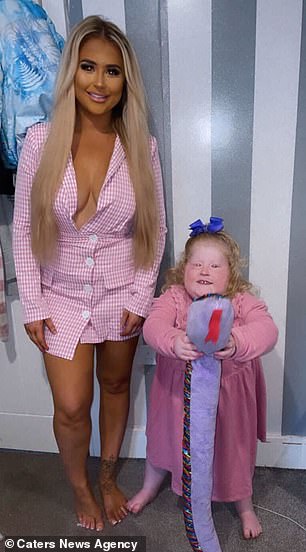 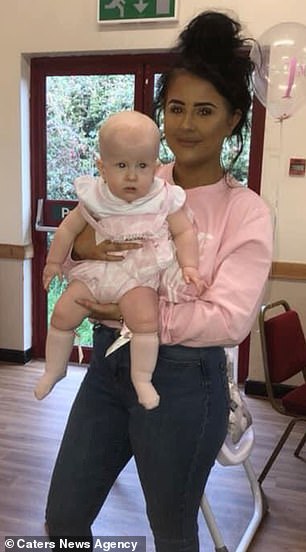 Left: A recent picture of Holly and Harlow together. Right: Harlow as a baby when doctors were in the process of diagnosing her with the condition

‘It’s really difficult because she constantly wants to eat and I have to make sure she doesn’t.

‘It’s hard to manage and I have to try and explain to her that she’s not really hungry.

‘If I were to leave a plate of cakes on the side and I wasn’t around, Harlow would easily eat them all. It’s happened plenty of times before.

‘She has scoffed an entire grab bag of chocolate that was left on the side before, while I wasn’t in the room.’ 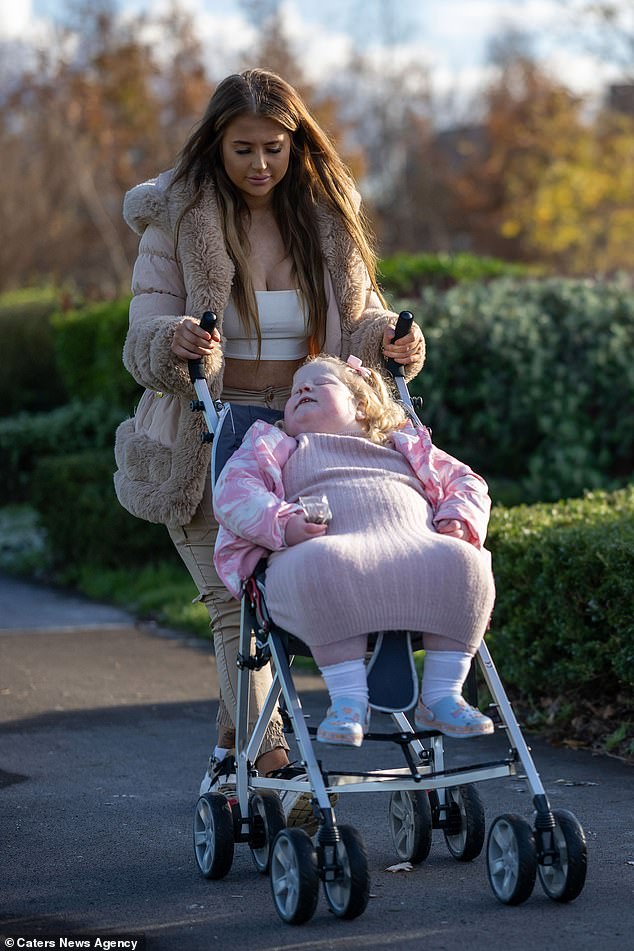 Holly says her daughter gets out of breath easily and can’t walk far. The mother says she’s learning to be ‘stern’ with Harlow about her snacking 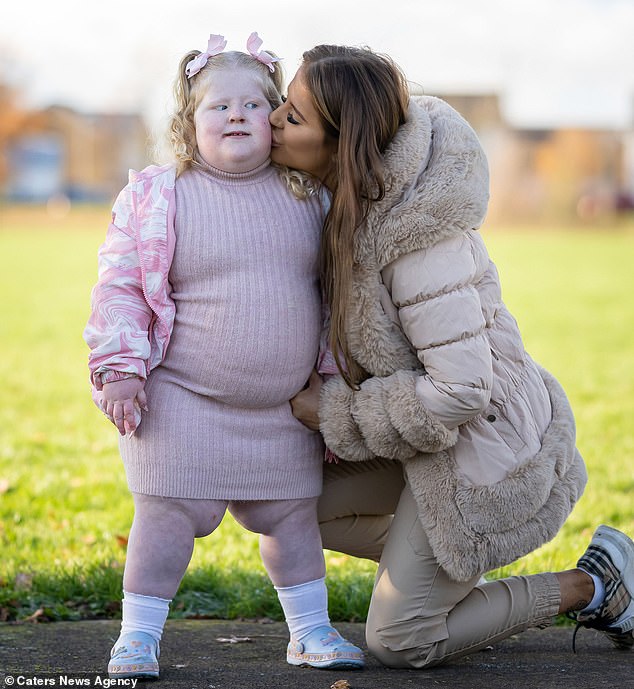 What is Prader-Willi syndrome?

Aware that her daughter is overweight, Holly says is learning to be stern with Harlow – telling her she can’t have anything else to eat once mealtimes are over.

She continued: ‘I make sure she has a healthy and balanced diet, but she is still allowed treats, as she is just a child after all, so I don’t want to completely deprive her.’

Before having Harlow, Holly didn’t know what Prader-Willi syndrome was – but she says it was evident her daughter wasn’t developing in a usual way very early on.

The mother continued: ‘We knew something was wrong when Harlow was born. She was tiny and only weighed 4lbs 12oz.

‘She was really floppy, had no strength, didn’t cry, and wouldn’t feed properly on a bottle.

‘The doctors assumed it was Prader Willi Syndrome because they said they could tell from her features too, such as her eyes, nose and mouth.’

For the first two weeks of her life, Harlow had to stay in hospital until she began feeding properly and was then officially diagnosed with the condition six months later.

Holly said: ‘She was then really delayed with her milestones.

‘Now she is five, she suffers with some mobility issues. She doesn’t walk far and gets out of breath easily, however, the fact she is overweight doesn’t help.

‘She also suffers with sleep apnoea.’

But despite her condition, Holly says Harlow ‘gets on with life and is a happy girl’ who attends an ordinary primary school.

However, Holly says Harlow has been known to thrown tantrums – especially when her mother says she can’t have more food.

She explained: ‘She will throw her iPad, kick her legs and scream and cry. I have to be stern with her otherwise she would rule my life. 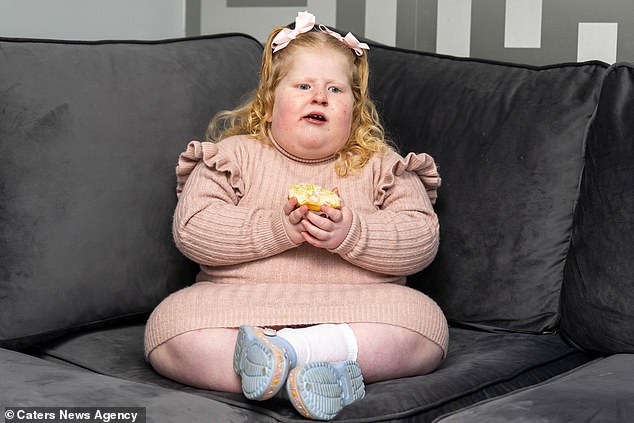 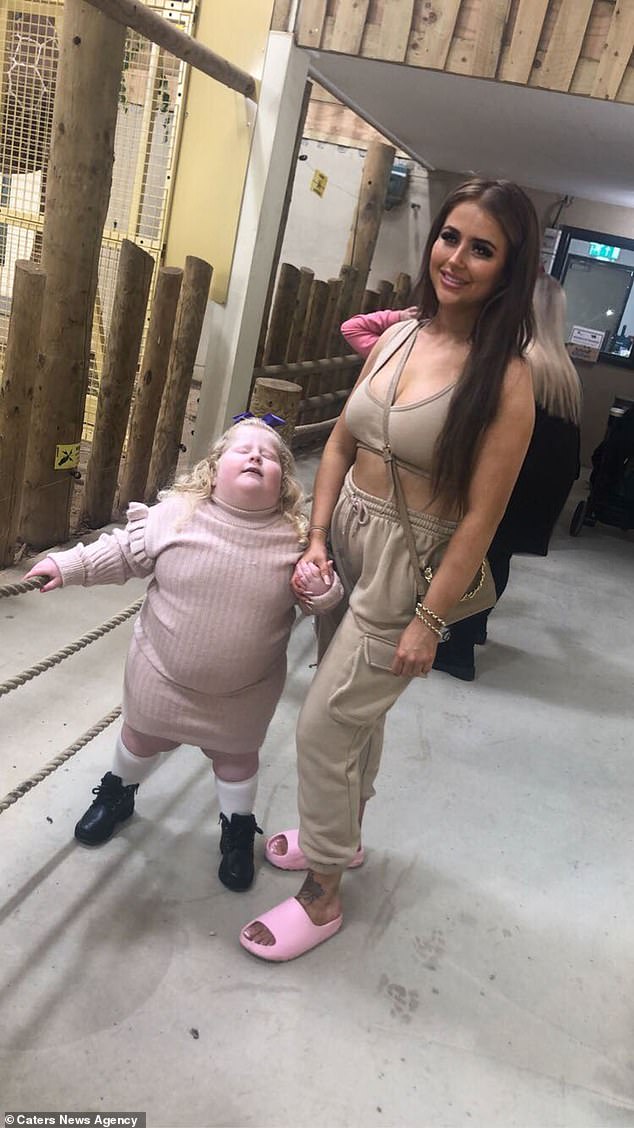 Holly says she has a ‘really close bond’ with her daughter Harlow. The mother-and-daughter recently pictured together

‘However, we have a really close mother daughter bond as we are together all the time.  She also idolises my mum.

‘She’s obsessed with her, as people with Prader Willi Syndrome have obsessive personalities. She gets fixated on certain things and will talk about it all the time.’

Admitting that it can be challenging at times, Holly admits that she ‘doesn’t know any different’ as Harlow is her first child.

What’s more, the mother says it’s been comforting to see Katie Price speak about her son Harvey too.

She continued: ‘I have watched a few of Katie Prices programs and documentaries, and I love watching her with Harvey as they remind me so much of Harlow and I. 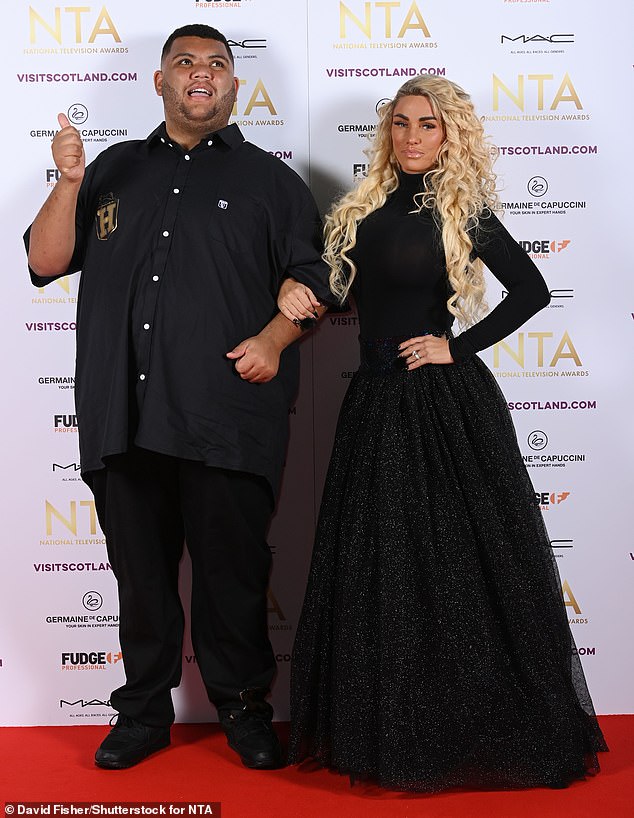 ‘One of the main things I have learnt from Katie Price is patience and to remain calm. It’s the most important thing, and you have to remember it’s as hard for them as it is for us.

‘I find it so inspiring watching Katie and Harvey, she is amazing with him. I relate to them so much.

‘I look at Harvey, and he’s such a lovely and funny boy, and it makes me think that is what Harlow will be like as she grows up. They have so much in common.’

Holly has started sharing snippets of the family’s everyday life on TikTok – and has been left devastated by comments from cruel trolls.

She added: ‘I’ve now had to turn the comments off on my TikTok videos. People say that I should be ashamed of myself for feeding her too much when that isn’t the case.

‘She is puts on so much weight due to her condition, and people don’t seem to understand that.’