I hated Christmas– until I fell in love

If you had visited our small, South London flat yesterday, you might have wondered where Christmas had got to.

We have a spot of greenery and a handful of lights. But there’s no bird in the fridge to haunt every meal; no clamouring relatives to be entertained or present-high nippers to mollify; scant wrapping paper to recycle; nor a single Quality Street wrapper in evidence; and no — repeat no — annual angst.

Instead, Terence and I spent our not‑so-big day doing very little, observing the handful of traditions we have forged over eight years together. We eat Terence’s now-famous nut roast. I’m the vegetarian, but tradition has it that he cooks to make up for millennia of patriarchal oppression (and because I do more of it during the year).

There was a Claridge’s Christmas pudding and a stupendous Epoisses cheese. We ate like kings, but with none of that insanity that leaves everyone bloated, drunk and furious. Both of us disliking excess, our gifts are always small, thoughtful offerings rather than crazed splurges.

If you had visited our small, South London flat yesterday, you might have wondered where Christmas had got to (Pictured: Hannah Betts, right)

Earlier this year, he planted bulbs to spring up on Christmas Day, made beautiful bowls for us to have breakfast in and secured my favourite panforte.

I delighted him with old books and wares from Anya Hindmarch’s stationery pop-up, and sported his late mother’s wedding brooch.

In the current interlude between Boxing Day and New Year there will be more established rituals: wintery dog walks, museum visits in search of ancient relics, trips to art galleries, jaunts to the opera, reading novels and tea by the fire. Festive, yes, but in a contained form, traditional only to me, my partner and our whippet — and it’s pure, unmitigated bliss.

Still, for 51-year-old me this is as full-on as celebrations get.

From childhood, I’d always been ambivalent about Christmas — aware of its stressful lows almost as much as its sparkling highs. Anxious and hollow-eyed, not for nothing was I always cast as a fretful Mary in Nativity plays. 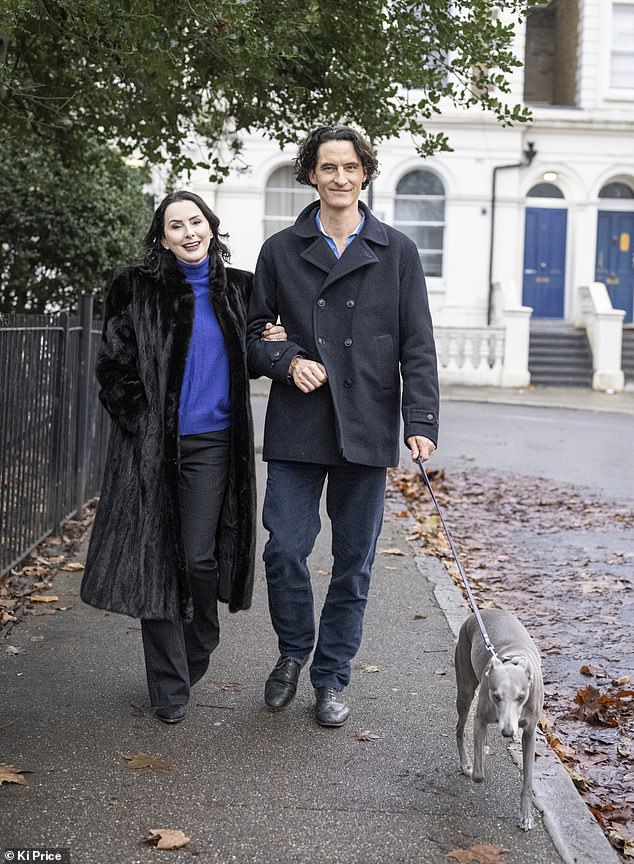 From childhood, I’d always been ambivalent about Christmas — aware of its stressful lows almost as much as its sparkling highs (Pictured: Hannah Betts on December 22)

I loved my mother and she was an excellent parent in many ways. Nevertheless, Christmas was a yearly ordeal that began with her first enquiries as to our future whereabouts on the August bank holiday, and ended with recriminations that lasted into spring. The food was outstanding; the passive aggression — and aggression proper — equally so.

We lost track of the savage arguments and snipes disguised as presents. Curtains were set on fire by Christmas puddings, Christmas trees knocked over by dogs and epic confrontations commenced.

It was ‘a lot’, as Millennials put it — too much. As the oldest of five, people are always telling me how wonderful it must be to be part of a big family. In truth, it resembled a pyjama-clad Game Of Thrones.

There are happy memories, but even these now feel buried under a great snow of stress. I can’t bear adults who blame their parents for all their ills; but when it comes to Christmas, my anxiety remains visceral.

At the beginning of my 30s, came yet more drama, and my mother banned me from home for the best — read worst — part of a decade for a transgression I hadn’t committed. The rest of my family did Christmas . . .only without me.

It was lonely, lacerating. So I made a virtue out of necessity and ditched Yule altogether. Frankly, it was a relief: the one upside to an otherwise torturous situation.

I could come out of the closet about my Christmas phobia. No turkey, no tantrums, no traumas. My truck with the festive onslaught was finished — and good riddance.

And, then, I fell in love with a chap who adored all the stuff I found most problematic: family and festivity, all those interminable days of forced fun. If Betts Christmases were full of sparring, my beloved’s sound as though they were straight from Central Casting: a traditional British Yule, played out in the requisite country manor.

Terence boarded from the age of eight. His mother died when he was 22, making Christmas something wonderful and poignantly longed for, from which he felt prematurely ripped.

To add to the irony, Terence and I met at a Christmas party. I was 43 and newly sober; he, 40, a textbook tall, dark, handsome stranger.

We both returned to our parental homes that holiday, in my case for the first time in over a decade. It would be our last. On Christmas Eve, my mother was diagnosed with terminal cancer; on New Year’s Eve, his father died of a heart attack. Our family Christmases were over. It was time to make our own traditions.

For a while, Terence indulged my longing to escape it all and we ran away in late December. That first year, we jetted to Sicily to pretend the Yule thing wasn’t happening.

Twelve months later, my father, too, was dead. Distraught, we found sanctuary in an elegant Parisian Airbnb, for a non-Christmas of art, mini patisseries and opera. Another year, we headed to Berlin. And so, we invented new, shared rituals.

Four years after we met, we moved in together. Three months later, we made the (for me) radical decision to stay at home for the festivities — our home — complete with our new pup, Pimlico.

It was my first non-running-away, Christmassy Christmas in 17 years and I needed to take baby steps.

Bauble-phobic, I erected a tiny, resolutely pagan tree, bedecked with a string of silver bells. Terence went to the other extreme and created giant wreath-and-tinsel snowscapes. As the day approached, he calmed my nerves with the woodsmoke candle he had brought with us to Sicily, Paris and Berlin — the scent of our mutual Yule.

We see the odd friend, but I am yet to feel up to the drinks party sociable Terence longs for. Beth, his sister, who clearly hosts a coruscating Yule, is also extremely generous at indulging my phobia. We meet before or after, but not during, when I have to vanish — the same with my own siblings.

Today Terence will read to me — something we both love. Or we’ll watch a (non-Christmas) film under a blanket with the dog. One of us might bake something, or we’ll wander into Chinatown.

We take the calm and nothingness that others allow themselves in this Twixmas period between Boxing Day and New Year — and create an exquisite void out of the whole thing. I wouldn’t say I’ve learnt to love Christmas — my anxiety surrounding it runs too deep. But, I love our Christmas, and that’s all that matters. Thanks to Terence, this is now a period I look forward to rather than dread.

Is it just me or has mingling become a minefield?

‘Dear Liz. Looking forward to seeing you on Saturday. Please don’t bring the pink Cava. We’ve got bottles of it. No one likes it.

‘And maybe go easy on the cheese straws?’

Not only did my friend’s text blow my lazy girl’s guide to party food out of the water, I realised that I’ve been taking pink fizz to their parties for years.

Not any more. There’s a new spirit of frankness in the air. The gloves are off. Now that we can finally meet in person at friends’ houses for Christmas, we are suddenly realising how intolerant our friends have become after two years in social Siberia.

And they’re no longer too polite to tell us when we do something they don’t approve of — from arguments about the heating (whatever you do, never touch another person’s thermostat) to the correct ring to use on the cooker for the mulled wine (‘No Liz! Not that one, you’ll burn off all the alcohol!’).

The shoes on/shoes off rules have become mystifyingly complex again, with each room potentially having a different status depending on the flooring.

I’ve also been getting my timings wrong. An invitation to ‘drinks from 6-8pm’ meant I was given the cold shoulder for arriving at 6.30pm and then presented with my coat at 8pm.

In Covid times we were so grateful to have even six people in our gardens that we would never have dreamed of criticising anything.

But after years of not mingling, hosts are berating their guests willy-nilly and we’re all losing our confidence. Let’s face it, no one likes getting told off.

It’s so lovely to see friends in 3D again. We’ve all missed the warmth of human contact.

But when did everyone get so bl***y annoying, and when did cheese straws become an inappropriate nibble?

JAN MOIR: Spare a thought for Carrie, now forced to plan a new life neither of them wanted

King Charles takes charge of Royal Christmas: Fergie will lunch with family at Sandringham as Harry and Meghan stay away but Prince Andrew WON’T join others in Christmas Day walk to church