A scheming mother ambushed her son with a blind date in front of his ‘shaking’ girlfriend in shocking scenes from reality series I Love A Mama’s Boy.

Shekeb, 30, and his Korean-born girlfriend Emily were left stunned with his mother, Laila, brought another woman to a lunch date that she had scheduled with the couple – a move that resulted in a ferocious argument between her and her son.

In the latest episode of the show, Shekeb takes Emily to meet his mother in an attempt to help the two women form a bond – after facing pressure from his mom to break up with her and begin dating a woman who is of Afghani decent, like their family.

But to his horror, his mother used the make-or-break meet-up as an opportunity to force her son into a meeting with another woman – and all in front of his devastated girlfriend who ended up storming out of the restaurant.

A scheming mother ambushes her son with a blind date in front of his ‘shaking’ girlfriend on I Love A Mama’s Boy! 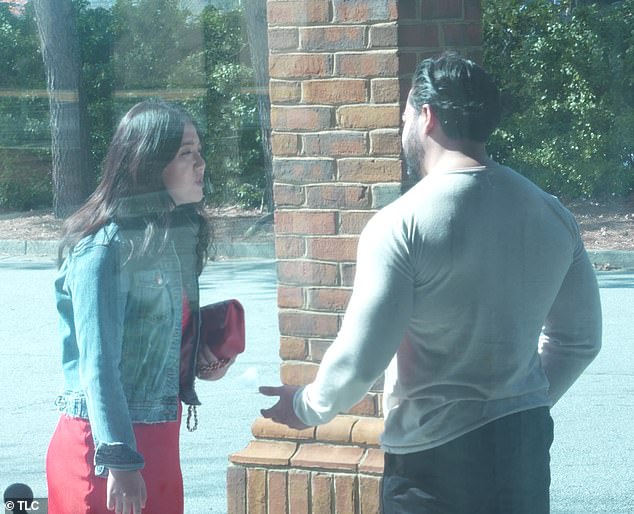 Laila continues to insist that Shekeb finds a woman from their Afghani culture. Pictured, Emily confronts Shekeb and gives him an ultimatum

Earlier in the episode, Shekeb is seen attempting to reconcile with his mother after storming out the house on her birthday following an argument about his relationship with Emily.

‘Ma, you have to understand, you were so mean to Emily,’ says Shekeb, who lives in the US. ‘I wanted her to finally get to know you more, and I want you to give Emily a chance. Whether you like it or not, Emily is going to be in the picture.’

But Laila isn’t budging and says: ‘Ever since that girl came into his life, I see a lot of change. We never ever argue, ever since she comes into your life and my life, you started arguing with mom, which is not right.’

To make matters worse, Laila continues to insist that Shekeb finds a woman from their Afghani culture.

‘I found an Afghani girl for you, you’re going to love her,’ she says. ‘I think she’s my dream girl to be my daughter-in-law.’

Reminding Laila of his failed marriage, Shekeb knocks back her suggestion.

‘I don’t want to relive that nightmare,’ he asserts. ‘We’ve been through this before. My mother set me up with an Afghan Muslim woman in my late teens. I was married for quite some time and ended up with a divorce. It wasn’t the life I wanted.’

Putting his cards on the table, Shekeb begs Laila to give Emily a chance. Reluctantly, Laila agrees to meet up with Shekeb and Emily for lunch.

Meanwhile, an exasperated Emily confides in her own mother, Sarah, who has some choice words of advice for her daughter.

‘I think my daughter Emily is a very sweet person, so I am very angry and really disappointed with Shekeb’s mom. I don’t like her,’ Sarah says. ‘Emily, just break up. Just break up.’

Caught in the middle of Shekeb and Laila, Emily admits that she is starting to feel the pressure in her own household as well.

‘I honestly feel so ashamed that my mother is disappointed in my relationship with Shekeb, that just makes me so upset at myself.’ 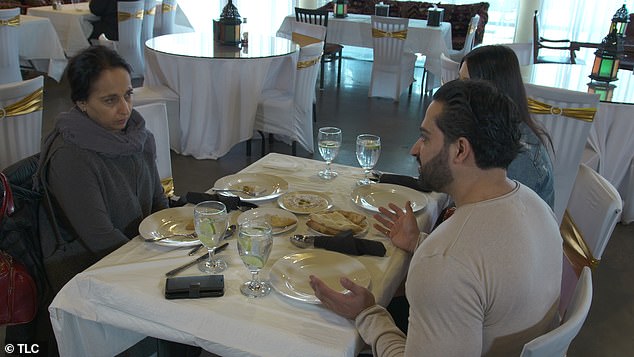 Laila (pictured, left) tries to set her son Shekeb up with another woman – right in front of Emily (pictured, right) 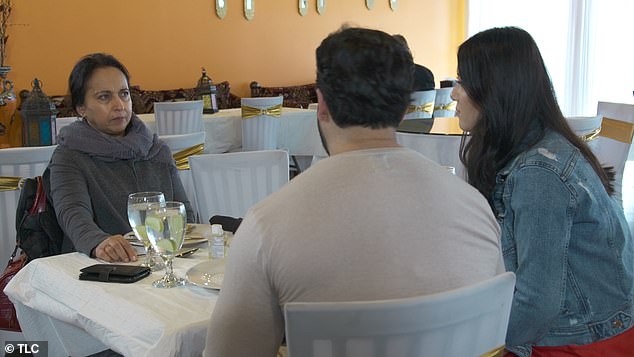 Laila comes clean and admits that she’s hoping to set Wagma and Shekeb up and push Emily out of the picture. Pictured, together

Seeking a second opinion, Emily meets up with her friend Jazmynn, who agrees that Emily faces an uphill battle to win Laila over and onus is on Shekeb to step up to the plate.

‘This is a big red flag,’ she says. ‘Let him man up and realize that you’re not happy, and let him do what he has to do to make sure that you’re happy. If he’s not listening, not changing, you got to break up. He’s disrespecting you.’

With plenty to think about, Emily goes off to prepare for her make-or-break lunch with Laila. And as they drive to meet Laila at the restaurant, Shekeb admits he’s confident that this is the fresh start the pair need.

‘This time it’s different, she knows you’re going to be there, there’s a reason why she wants you there,’ he says to Emily. ‘I think she’s willing to give you a chance.’

But as they enter the restaurant, Laila’s true motives are quickly revealed as Shekeb and Emily see her sitting with another woman.

‘I would like to introduce Wagma,’ Laila says to her son.

Suddenly, the penny drops: Laila’s trying to set Shekeb up with another woman – right in front of Emily.

‘I see this woman and I don’t know what’s going on, I am actually just like shaking,’ a furious Emily admits.

Speaking to the camera, Laila says: ‘I’m at the restaurant earlier than Shekeb, and I’m so excited and I cannot wait. I want Shekeb to come and see Wagma, the girl from my country. I want her to be my future daughter-in-law.’

With no choice but to come clean, Laila admits that she’s hoping to set Wagma and Shekeb up and push Emily out of the picture. 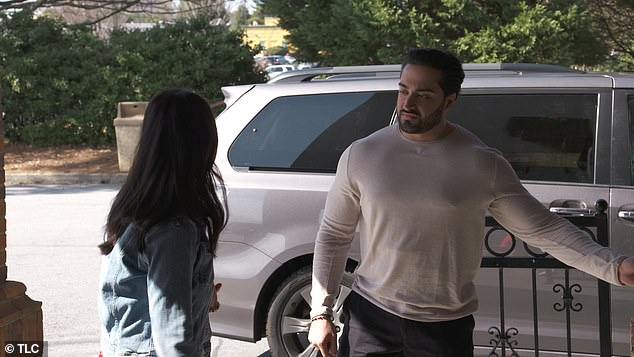 Enough is enough for Emily, who lays into Laila for embarrassing her, before a horrified Wagma says her piece. Pictured, together

‘She’s the one that I was talking to you about,’ Laila says. ‘Are you serious?’ Shekeb replies. ‘She told me that she wants to set me up but I said no.’

Emily seethes: ‘No way, this can’t be a blind date in front of my face,’ to which Laila scornfully glances at Emily and adds: ‘She’s already brainwashed you.’

Enough is enough for Emily, who lays into Laila for embarrassing her, before a horrified Wagma says her piece.

‘I think I should leave, I’m sorry,’ she says awkwardly.

And Wagma was none the wiser either either, adding: ‘I wish that Laila told me that Shekeb was dating another woman. I wanted to meet Shekeb but this was just too awkward.’

‘I try my best to be conservative, to be respectful, you keep saying that I’m not a good woman,’ she says. ‘I will marry who I want to marry, and that is Shekeb.’

For the second time in a matter of days, Shekeb and Emily are left with no other option than to walk out on Laila. Will Laila give Emily a chance, or is it just not meant to be for the young couple?