I Love Lucy’s idyllic portrayal of 1950s America made it the most watched show of its time, and its stars Lucille Ball and Desi Arnaz were presumed to be the perfect couple both on-screen and off.

But a new book has laid bare their torrid two-decade relationship with revelations of alcoholism, extra-marital affairs, prostitution use and brutal arguments.

While the couple’s flings were an open secret during their marriage, the book goes into extraordinary detail about the turbulent nature of their personal life.

It also reveals how Ball posed naked in modeling shoots and ‘turned tricks’ to make ends meet during years spent trying to make it in the showbiz industry.

Ball, who was eight years senior, and Arnaz wed in 1940, having met the same year, when they were at opposite ends of the Hollywood power dynamic.

Ball was the established star of more than 50 films, while Arnaz had fled Cuba and been forced to take work as a janitor, before trying his luck as a musician and actor

After their careers had both hit roadblocks, the couple convinced TV executives at CBS to cast Arnaz as a Cuban bandleader, a fictionalized version of himself, alongside his all-American wife Ball.

Almost as soon as it launched in 1951, the show quickly became the top-rated program on television.

But behind the scenes, the sex-obsessed Arnaz was constantly cheating with prostitutes, while Ball also sought the company of other men. 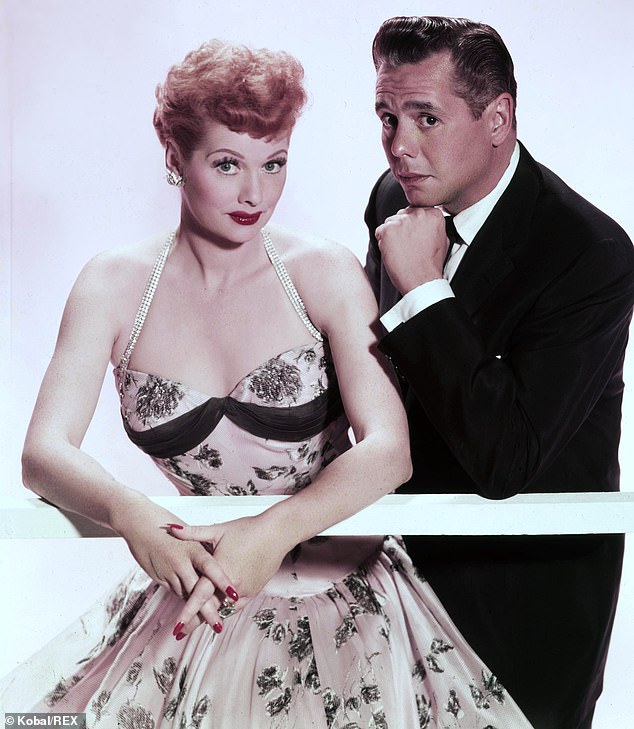 On screen they played fictionalized versions of themselves, she the all-American beauty and he the Cuban band leader 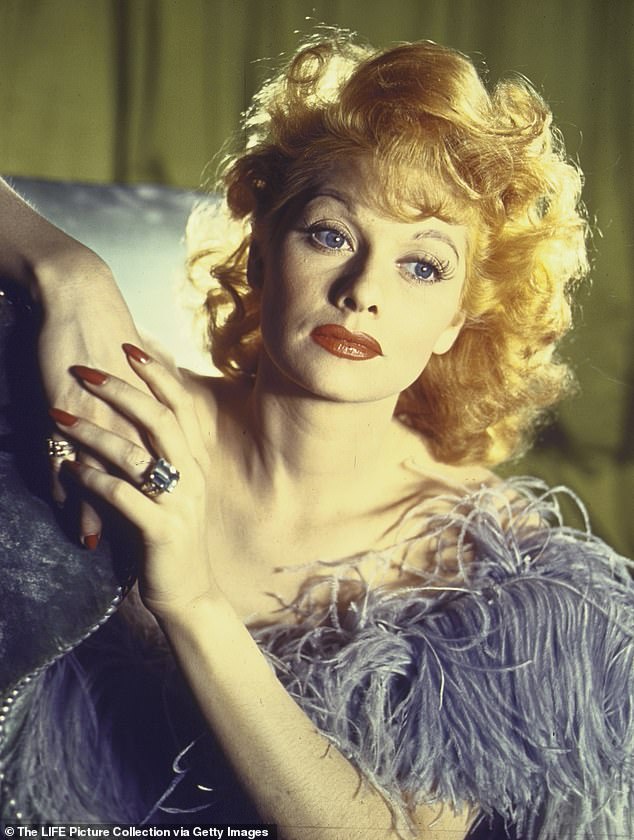 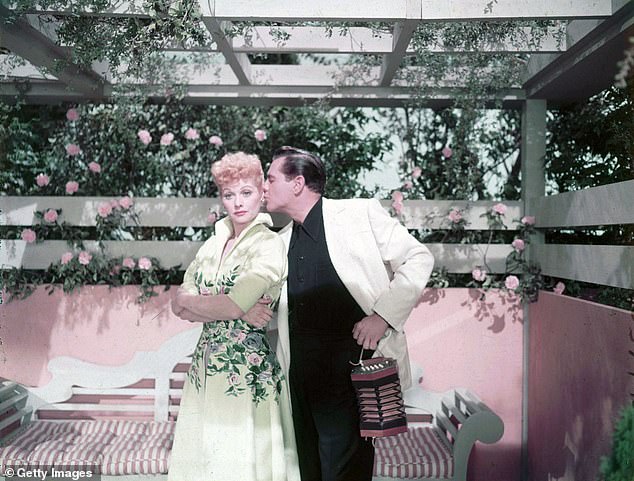 While they played the perfect 1950s couple on-screen, away from it the pair had violent arguments, and cheated on each other often 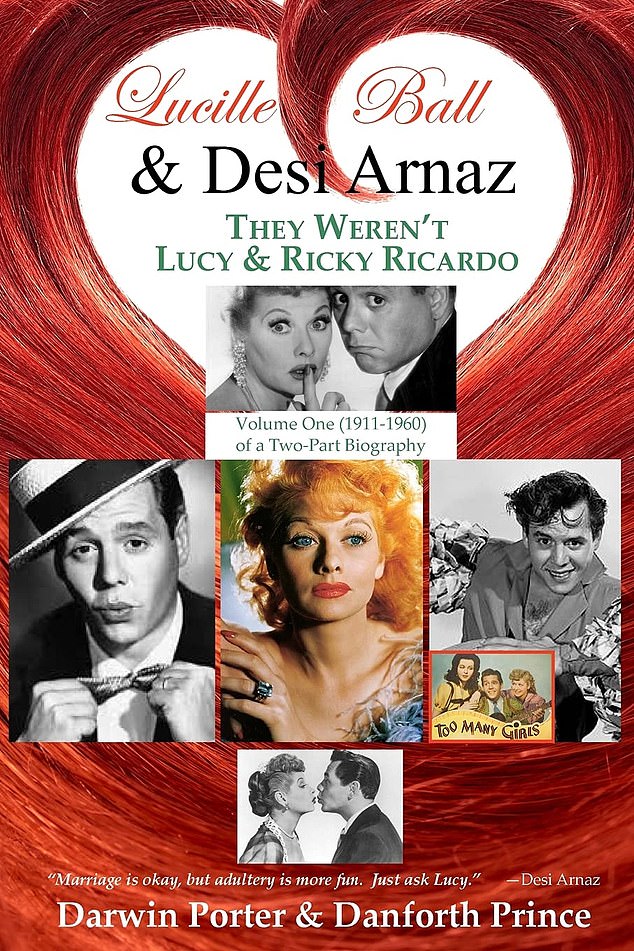 Author Darwin Porter recalls meeting the famous couple in the late 1950s when they appeared together at a ‘Lucy & Desi’ day at the University of Miami.

Porter, the student body president at the time, had arrived to drive them to the event, and discovered the pair having one of their legendary arguments.

‘She shouted denunciations at him, at one point calling him (a racial slur). She accused him of having sex with two prostitutes the night before,’ writes Porter.

‘He didn’t deny that, but claimed, ‘It doesn’t mean a thing, my fooling around with some hookers. Peccadilloes don’t count.’

Ball, born in 1911, was a young starlet in the making from her early days growing up in Jamestown, New York.

She moved to New York City as a teenager to take  acting lessons, but was outshone by another future star in her class, Bette Davis.

At the age of 14, Ball started a relationship with then-23-year-old Johnny DaVita, a roughneck alcohol smuggler who used to beat her up.

While trying to make ends meet, Ball did some nude modeling, ‘turned the occasional trick’, and would have to scrounge food to survive, the biography states.

According to the biographers, she would finish plates of food at diners and take half-finished steaks home from dates.

She thought she’d gotten her first big break when briefly cast in a stage revue The Ziegfeld Follies, but she was fired after a few days and told by the director: ‘You’ve got no tits, and you can’t dance.’

She soon got work as a model and became one of the best-known socialites in the city.

She dated an array of prominent men, including Albert ‘Cubby’ Broccoli, who produced the James Bond films, and rumored Mob associate Pat DiCicco, who would later marry fashion designer and heiress Gloria Vanderbilt.

Ball later relocated to Hollywood, where she starred in more than 50 films. She dated many of Hollywood’s leading men of the era, including Orson Welles, Henry Fonda and Jimmy Stewart.

But it was only after she teamed up with husband Arnaz in I Love Lucy that she became a household name. 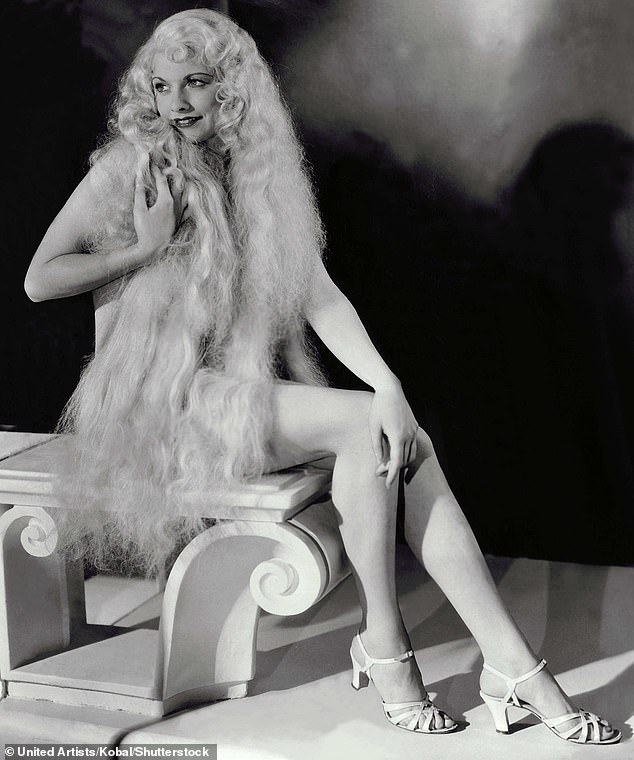 While trying to make ends meet before she was famous, the book details how Ball did some nude modeling and would have to scrounge food to survive 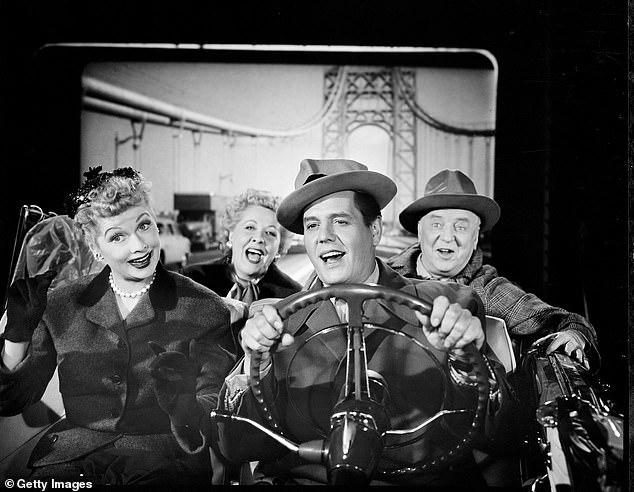 The cast of ‘I Love Lucy’, from left to right Ball, Vivian Vance, Arnaz, and  William Frawley, in a 1954 episode entitled California, Here We Come! 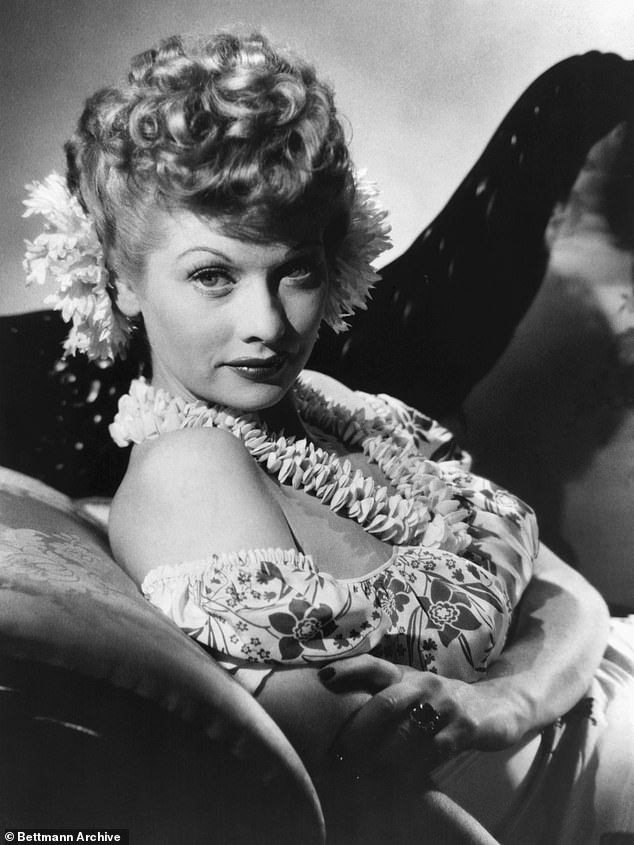 Ball had affairs with many of Hollywood’s leading men, including Orson Welles and Jimmy Stewart 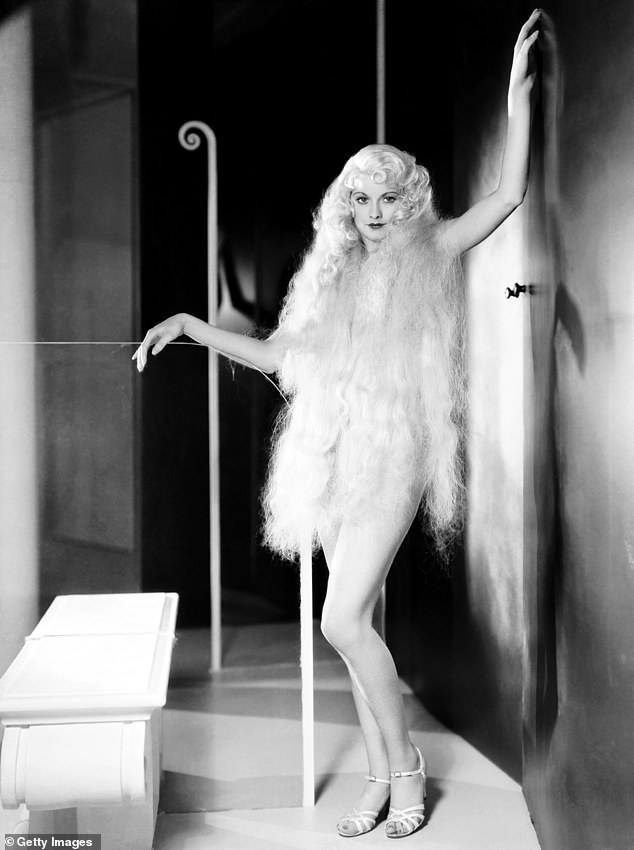 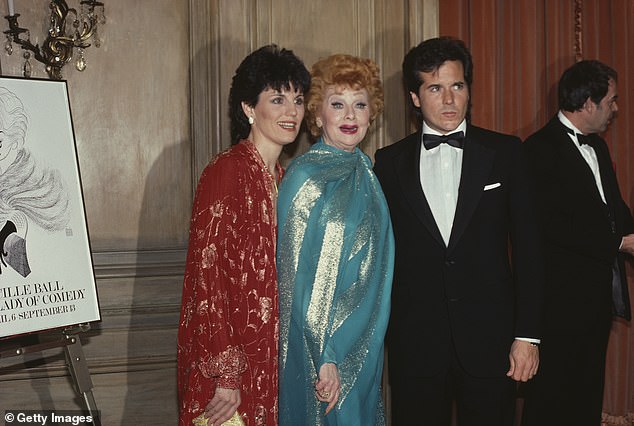 She and Arnaz had two children, Lucie, left, and Desi Jr, right, before divorcing in 1960. She is pictured during a tribute to her at the Museum of Broadcasting in New York City, April 1984 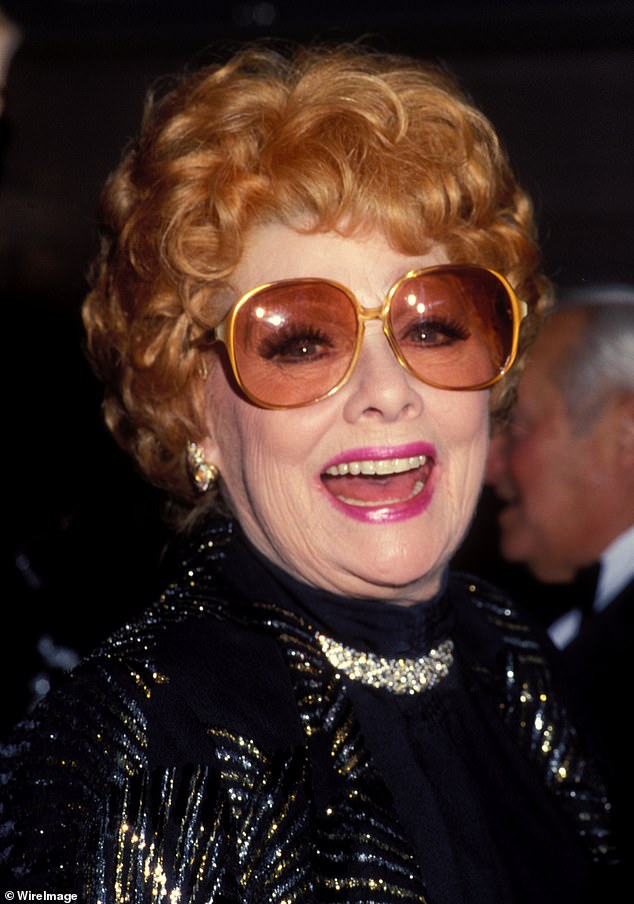 Ball, who was eight years older than Arnaz, passed away in 1989 at the age of 77

Arnaz was born in Cuba, to a wealthy landowning family.

His father reportedly took a Arnaz to a brothel when he was just 12 years old for him to lose his virginity.

The family lost everything in the Cuban Revolution and fled to the US, where Arnaz found work as a janitor cleaning out canary cages.

According to promotional material for the book, Arnaz later moved to Manhattan where he struggled to make ends meet as a musician.

He became the ‘kept boy’ of the gay composer Lorenz Hart, and simultaneously had an affair with Ginger Rogers on the side.

He later moved to Hollywood, where he met Ball.

According to the authors Darwin Porter and Danforth Prince, Ball described her former husband as a ‘Jekyll and Hyde’ after their divorce in 1960.

‘He drinks and gambles, he’s awash in broads and booze, and that gay actor, Cesar Romero, is his devoted slave.’

‘Love?’ she asked. ‘I was always falling in love with the wrong man. Including Desi.’

Arnaz spoke ruefully of how their tumultuous relationship had been impacted by their onscreen success.

‘We were anything but Lucy and Ricky Ricardo. They had nothing to do with us. We dreamed of success, fame, and fortune. And guess what? It all led to hell.’

The couple, who had two children Lucie Arnaz and Desi Arnaz Jr, apparently became better friends after their divorce.

The famous couple are about to be thrust back into the spotlight once again, as Nicole Kidman and Javier Bardem are starring in an upcoming biopic called Being The Ricardos written and directed by Aaron Sorkin.