A woman has claimed she married serial killer Ian Brady before he died after nine years of writing letters to the Moors Murderer.

Cheryl Stewart-Brady, 29, says she wed the 79-year-old in 2015 to try to ‘get him to open up’ about his crimes, although she claims she ‘never loved him’.

Brady was jailed for life in 1966 for sexually assaulting and murdering at least five children around Greater Manchester between 1963 and 1965 alongside Myra Hindley.

He died in hospital aged 79 in May and the High Court ruled earlier this month his funeral plans, including having his ashes spread over the moors, could not be carried out.

Moors Murderer Ian Brady, pictured, ‘married his penpal Cheryl Stewart-Brady’ two years before he died, according to the 29-year-old 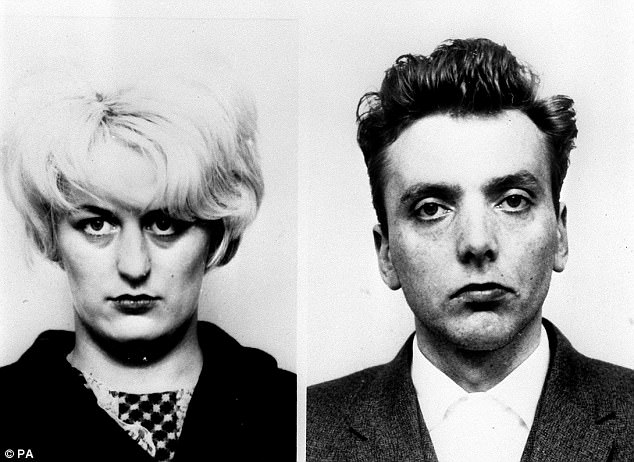 Mrs Stewart-Brady said she started writing to Brady, right, who killed at least five children with fellow murder Myra Hindley, left, in 2006 and married him ‘to get him to open up about his crimes’

According to the Daily Star Online, Mrs Stewart-Brady made contact with him when she was 20 and their correspondence continued until they agreed to meet at the high security Ashworth Hospital in 2015, where they had their ‘ceremony’.

She said: ‘I married him thinking he would talk or open up but I never felt sorry for him. He was there for a reason. The marriage doesn’t exist legally speaking, Brady was single when he died.

‘It was him swearing over a Bible – but I got nothing, just constant moaning about his treatment in Ashworth and reminiscing about his Glasgow days.’

She added Brady was ‘not allowed to be cremated with his wedding band’ but could not retrieve it because ‘it is a closed coffin’.

Ms Stewart-Brady’s claims are unverified and social media accounts appearing to belong to her have since been removed.

Brady’s lawyer Robin Makin refused to comment on the claims when contacted by the Star while Ashworth Hospital said it could not comment due to patient confidentiality. 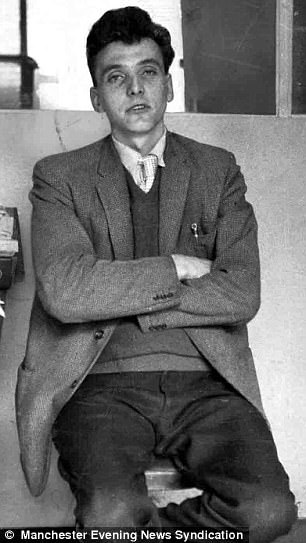 Mrs Stewart-Brady said the marriage was ‘not legal’ and consisted of the killer, pictured, ‘putting his hand on a Bible’

The killer had been at Ashworth Hospital since 1985 while serial killer lover Hindley died in 2002 after 35 years behind bars.

Last week High Court judge Sir Geoffrey Vos banned Brady’s choice of music as he said it could offend his victims’ families, and ordered that council officials must decide what should happen to his ashes.

The Chancellor of the High Court said Brady’s wishes were outweighed by the risk of public anger and unrest if his ashes were scattered on Saddleworth Moor.

Relatives of their child victims said it would be a ‘final insult’ if Brady’s remains were scattered there.

Terry West, whose ten-year-old sister Lesley Ann Downer was among their victims, said: ‘As long as it’s not on the moor, I don’t really care. Let him rot.’

Brady and Hindley’s sickening crimes caused such anger and revulsion that the judge ordered Brady’s cremation and the disposal of his ashes should be carried out in secret, to avoid ‘public disorder’.

The killer had asked for a piece of classical music, the fifth movement of Berlioz’s Symphony Fantastique, to be played during his cremation.

The judge said the subject and theme of the music meant it would cause ‘legitimate offence’ to the families of Brady’s victims, and banned it from being played.

He said Brady had not made any further requests, and ordered the cremation should be carried out as soon as possible, with ‘no music and no ceremony’.

Brady had appointed his solicitor Robin Makin as his executor, and had asked him to arrange the cremation and the disposal of his ashes.

But Mr Makin refused to reveal his client’s last wishes to the two councils whose areas cover Saddleworth Moor, or to promise he would not scatter the ashes there, although he told a coroner there was ‘no likelihood’ of that happening.

The judge said: ‘There is undoubtedly real and genuine public anger and distress about what may happen to the deceased’s body. 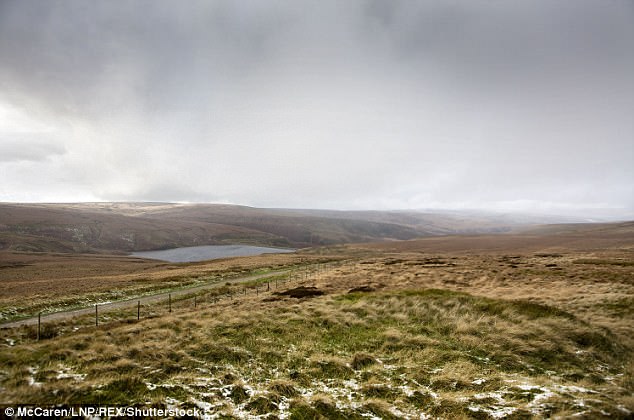 It comes days after the High Court rejected Brady’s wishes to have his ashes scattered over the moors, pictured, where he killed his victims

‘The families of the deceased’s victims may well be legitimately offended by an insensitive disposal. There is a real public interest in ensuring that the disposal does not create unrest or disorder.’

He added: ‘The deceased’s wishes are relevant, but they do not outweigh the need to avoid justified public indignation and actual unrest.’

Brady and Hindley were jailed for life in 1966 for torturing and murdering John Kilbride, 12, ten-year-old Lesley Ann Downey and Edward Evans, 17.

They went on to admit the murders of Pauline Reade, 16, and Keith Bennett, 12.

With the exception of Edward Evans, all were buried on Saddleworth Moor.

Hindley died in November 2002 and her ashes were later scattered in Stalybridge Country Park in Tameside, just a short drive from the moors.